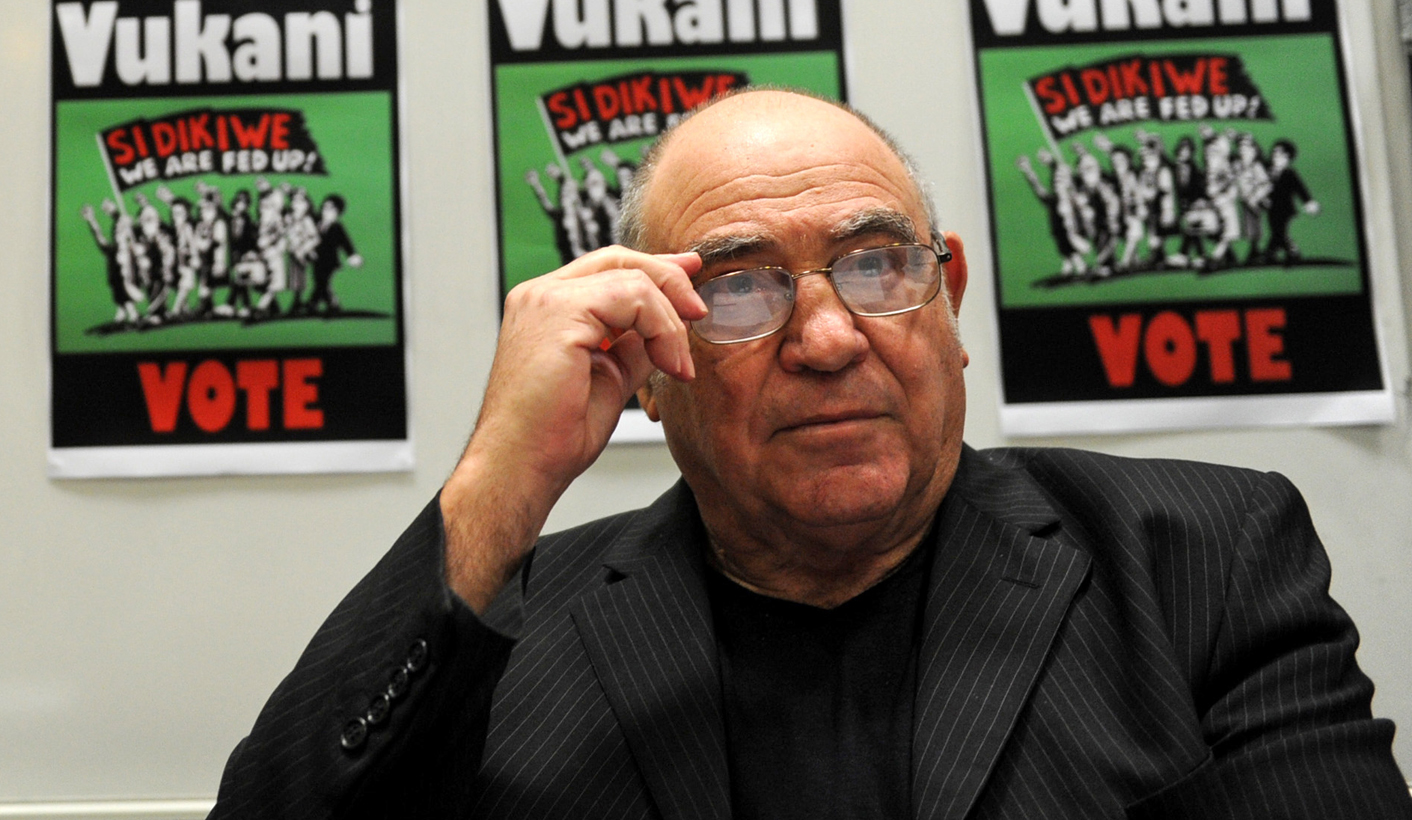 Ronnie Kasrils has battled bad guys since he was a lad. He’s this country’s ranking old-school commie, and comes from so deep in the ANC that he bleeds yellow, black and green. But now he’s turned his back on the Party, and has ordered South Africans to vote “No!” With his SIDIKIWE, VUKANI, WE ARE FED UP! initiative, Kasrils has broken the election. By RICHARD POPLAK.

It’s only a few hours before Shabbas when I arrive at Ronnie Kasrils’ Killarney apartment building, and the smell of cooking wafts along the open hallways and into to the wild of the Wilds. I smell tsimis and brisket and fried fish, but when I arrive at Kasrils’ modest flat, his culinary skills are somewhat more, well, Marxist-Leninist. He is making what a friend and I, living in our own Killarney bachelor pad, used to call “Man Salad”: an assortment of vegetables tossed about with diced baloney, smeared with mustard and washed down with a Savannah. The current crop of South African communists, who dine at Tashas if they feel like mixing with the masses, would be horrified by so peasanty a repast. But indeed, this is how comrades used to live, AMG-less, eating radishes sans truffle oil and raspberry jus.

At 76, Kasrils doesn’t merely resemble a rugby forward—he appears to have the density of an entire team atomised into one stocky body. His neck is as thick as an oak bough, and while old age is blurring him around the edges, Kasrils still looks like he could take on a phalanx of riot cops and shake off their ministrations like the Incredible Hulk in a pop-punk mosh pit. Indeed, he is at war again—battling his old party, his home for fifty years. Don’t vote for the ANC, insists Kasrils, and don’t vote for the DA, who kept shtum during Marikana, and are a shill for Big Business. If need be, trash your ballot. Show up, be counted, but tell the cheating capitalist scum what you think of fancy salad-eating ways.

After almost five decades of South African shit-disturbing, Kasrils is thus not slowing down. His radicalization dates back to the Sharpeville massacres in 1960, and by 1961 he was a ranking member of the South African Communist Party. He helped found Umkhonto we Sizwe, got his military training in the USSR, and worked his way up to head of MK Intelligence by 1983. He served in several ministries and as a member of the ANC’s National Executive Committee from 1987 to 2007, tendering his resignation after the ghastliness of Polokwane saw Mbeki ousted in 2008. And the Jews in his Killarney building don’t like him because he doesn’t like Israel. This potted biography functions as a reminder that Kasrils is as Inside as Inside gets. And now that he is on the Outside, the small revolution he is conducting has ignited brushfires of circumspection across the country.

He is sowing doubt in the faithful, he tells me, one congregant at a time.

“People are expecting those of us who’ve been around for a long time to say something,” Kasrils says. “I’ve long seen how pointless it’s become to get things done inside the ANC or the SACP. I’m 76, and to waste time knocking my head? No.”

Instead, Kasrils is knocking other people’s heads, most notably his old comrades in the rotting institutions he helped build. His SIDIKIWE, VUKANI, WE ARE FED UP! initiative has sent baffled rumblings through the country: here is a struggle stalwart, a man whose credentials are ironclad, telling South Africans to vote for anyone over the ANC (and the DA), or scrawl a big “no thanks” on their ballot, thereby rendering it spoiled.

As a fellow Man Salad eater, there is something awesomely punk about SIDIKIWE, something anarchic at its core that appeals to the ballot shredder in me. But Kasrils is careful to point out that, along with his co-conspirators—former deputy minister Nozizwe Madlala-Routledge, Barney Pityana, Vish Satgar, Breyten Breytenbach, Stephanie Kemp, Louise Asmal, Mazibuko Jara, among others—he is trying to return some semblance of intellectual honesty to the democratic process, a process that isn’t really democratic if South Africans are robotically voting for the ANC out of some sense of historic duty.

The day before we meet, Kasrils was at a packed Grahamstown town hall meeting, organised by the Unemployed People’s Movement (UPM). “There, you understand that the ANC will get their majority,” he tells me. “You see, I was speaking with people who don’t read newspapers every day, who don’t know about SIDIKIWE. But intellectual thought is very important in changing minds and changing attitudes. This SIDIKIWE stuff takes time to filter down. But it does filter down. And while the ANC will get their majority this election, in 2019, I truly believe they’ll be down to 50 percent.”

In other words, in playing ballot spoiler, Kasrils and SIDIKIWE are working a long game—weakening an ANC that is weakening the country. At the town hall meeting, Kasrils tells me that he was astounded by an interaction that he shared with an old “peasant” at the end of the question and answer period. The fellow rose, balancing on his stick, and asked, “How can you say no to the ANC? If they lose the Boers are coming back. What will happen to our children?”

To which Kasrils answered: “Look, mdala, I can well see given your age what 1994 meant for you. You thought you would never vote in your lifetime, and then you did, for Madiba. And now there are people like me saying ‘Vote No!’ But actually, we are saying don’t abstain. The ANC are not going to lose. But what if the ANC loses some percentages, which I really think will act as a slap in the face. We’re saying use your vote. And if you spoil your ballot, it’s counted. We’ll all be looking for spoiled ballots. They mean something.”

And the old man put his hands on his head and said, “Oh, I understand now. Why didn’t you start this earlier? It’s too late! It’s too late!”

The old fellow is of course correct: it’s too late. Leaving home is the hardest thing of all to do, and Kasrils is asking the faithful to befoul the house in which they have lived their whole lives, to smear it with effluent, to turn their backs and walk into the wilderness where only the Dagga Party waits with a lit spliff and kind word. But home for Kasrils has always been a place that is less defined by an acronym, and more by a cause. In other words, with SIDIKIWE Kasrils is home—a place in which engagement, intellectual curiosity and debate define the issues, so long as the debate is heavily basted with socialism.

So, at this late date, would Mr Kasrils be willing to endorse a party in order to counter Jacob Zuma and his merry band of BMW-chauffeured horse thieves?

Kasrils smiles, and gets down to the business of cheeky equivocations. “I admire the EFF,” he tells me. “I welcome the emergence of a party that places the Freedom Charter front and centre. People say that their manifesto is unrealistic, but the ANC’s is just the same old bland stuff. No, the EFF are not just smoking some strange tobacco. They come back to an argument that we’ve given too much to the capitalists.”

So, should I vote for them?

Big grin. “I really approve of their programme. I don’t like that there’s cloud over Julius Malema, and I don’t like some of the things he’s said in the past. But I blame the ANC under Jacob Zuma for that—they made his head too big. And I don’t like the whole Commander in Chief thing—it’s too much like militarization.”

So, I should vote for them?

Bigger grin. “I also really like and admire Bantu Holomisa [of the United Democratic Movement.] I am still really ashamed that when Madiba wanted him expelled from the party after he testified at the Truth and Reconciliation Committee [in 1996], I didn’t speak up. I like him, and I like what they’re about.”

They get your vote, right?

“Well, I’m not saying I’d vote for them. I’m also interested in the Worker’s and Socialist Party [WASP]. I’m impressed with their manifesto.”

So much to chose from! Probably best just to spoil the ballot then.

“No, I won’t spoil. I’m going to select someone. I might vote differently provincially than nationally. And I would hate to see the ANC ousted by the DA in Gauteng. So I’d be thinking of someone who could form a coalition with the ANC.” Really big grin. “Make of that what you will.”

And so, Ronny Kasrils has turned the 2014 elections into one big Man Salad. His is a small, probably ineffective but definitely necessary initiative. It takes us back to a time when men and women with ideals fought for something other than kickbacks. Kasrils has left home in order to come home. DM

Photo: Former intelligence minister Ronnie Kasrils attends the launch of the “Sidikiwe Vukani! Vote No” campaign at Wits University in Johannesburg, Tuesday, 15 April 2014. The aim of the campaign is to get struggle activists and others not to vote for the ruling party – or at least to spoil their ballots on May 7. The campaign, they say, is protesting against corruption and current government policies. Picture: Werner Beukes/SAPA.