As the DA wraps up campaigning, Maimane stakes his Gauteng claim 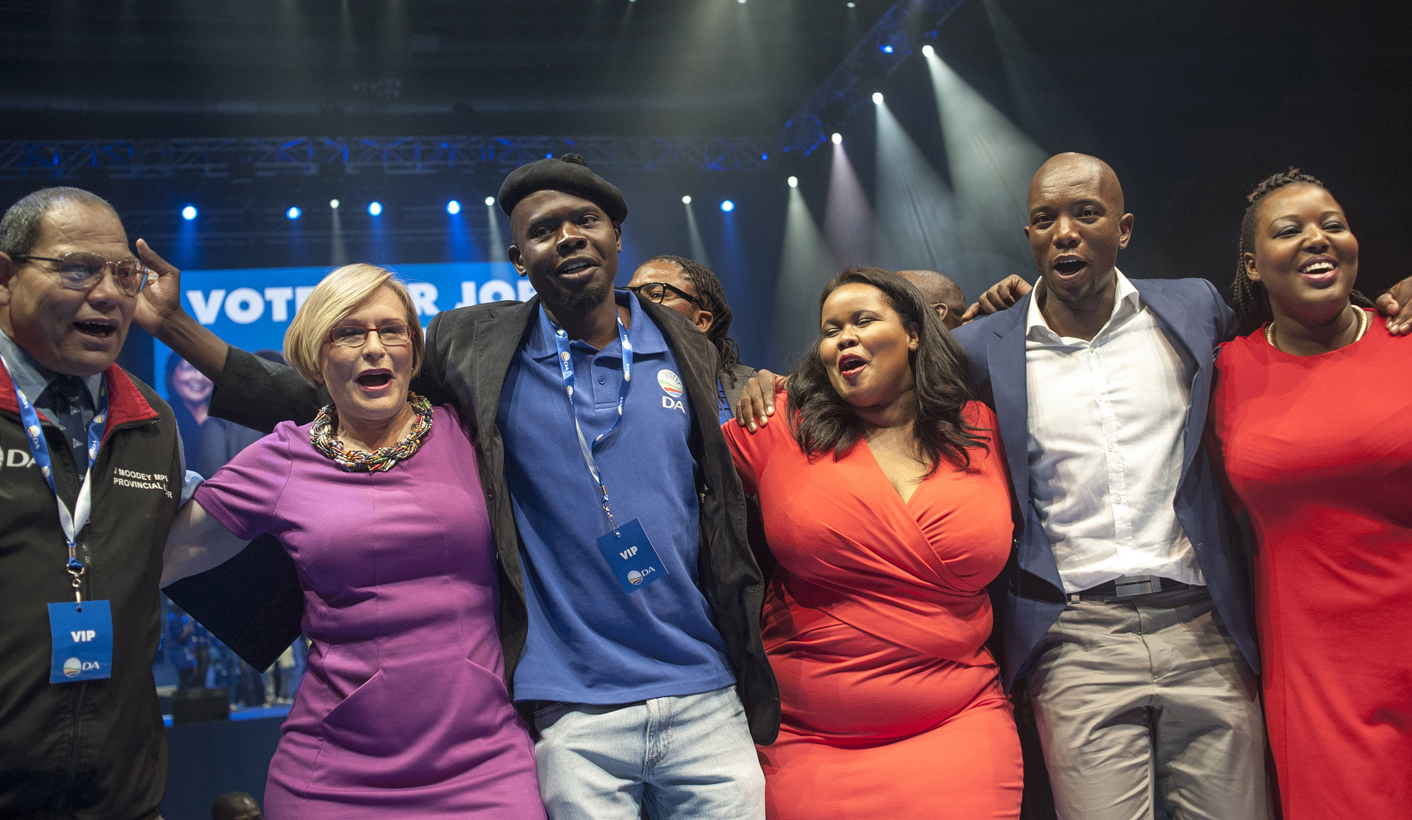 Helen Zille’s Blue Army gathered in Joburg on Saturday for one last hurrah before polls open on Wednesday. But for once, Zille was not the focus of proceedings. That honour went to Mmusi Maimane, who believes he is in with a genuine shot at toppling the ANC’s hegemony in Gauteng. The loyal crowd did not disagree. By SIMON ALLISON.

On Saturday, the Blue People were out in force at the NorthGate Dome, Johannesburg. Admittedly, the choice of venue – nestled in the heart of white, middle-class suburbia – was unfortunate, given the DA’s attempts to shed their reputation as a white, middle-class party, but this shouldn’t detract from what was a very effective final stop on the campaign trail for Mmusi Maimane, Helen Zille, Lindiwe Mazibuko & Co.

“We stand today on the doorstep of a new tomorrow,” screamed Maimane, who was clearly in his element in front the 20,000-strong crowd, all in their matching DA t-shirts and waving their little DA flags. The crowd screamed back. Maimane is superb on the stump: his eloquence, passion and charisma are reminiscent of a young Barack Obama, and the audience hung onto his every word. “Our destiny is in our hands,” he said, and for just a moment it was tempting to believe him.

Harsh electoral realities, however, mean that the DA’s dreams of governing South Africa – of bringing that change it keeps talking about – are still distant. “Imagine what we could do if the voters gave us the chance to govern South Africa,” said Helen Zille, an almost wistful tone creeping into her voice, because she knows as well as anyone that imagining is about as close as she’ll get to the President’s office.

Which is why this rally, the final stop on the DA’s nine-week whirlwind campaign through all nine provinces, was not really about Zille. She may have given the final, keynote address, but this was all about Maimane, the party’s candidate for Premier of Gauteng. He chaired proceedings, his TV adverts played during every break, he sang and toyi-toyied on stage – and he definitely attracted the biggest cheers.

The DA really believes it has a chance of taking Gauteng. Gauteng is the province, it feels, where the ANC is weakest, apart from Western Cape, of course – and that in Maimane it has a candidate capable of, at the very least, taking the fight to the ruling party. “Change has never been so possible in Gauteng… a better future is within our grasp,” said Maimane.

Key to Maimane and DA’s electoral strategy are the failings of the ANC itself. The headline message, reinforced by every speech and the giant ‘Together for Change’ banners strung up from ceiling, was change – how the ANC has changed (ayisafani), how South Africa needs a change, how the DA can bring about the change, invoking, of course, memories of the 2008 presidential run of one Barack Obama, and his Change We Can Believe In campaign slogan.

Zille summed it up best: “Under presidents Mandela and Mbeki, there was economic growth and there was development. And that meant more jobs. We did not agree with everything government did, but we have to say there was progress. But in the last five years, under the leadership of President Zuma, the ANC has changed… the ANC has become arrogant because they believe the voters will carry on voting for them whatever they do. Well, they are in for a big shock on Wednesday.”

Although effective, this tactic is at the root of one of the most common criticisms levelled at DA. Does it actually have any policies of its own, or does it simply define itself as the anti-ANC?

Perhaps conscious of this, Maimane came through with some concrete ideas for Gauteng – several of which might just entice the undecided (which is of course the point of these pre-election promises; implementing them is another thing entirely, especially with Maimane’s distinct lack of hands-on governing experience).

Maimane also promised to turn around education by upgrading schools and focusing on maths, science and technology. “Liberation must start in the classroom, it must be to the benefit of every child…no more will the child in Soweto receive an inferior education to the child in Sandton.”

Another promise is to deliver all outstanding title deeds in Gauteng to an estimated 220,000 families that are waiting for them. “Title deeds bring capital to the hands of people. Title deeds allow those people who struggle to get ahead the chance to start a small business, or to pay for an education for their children,” he said.

While all this was enthusiastically received, clearly Maimane’s most popular proposed measure was on a subject close to the heart of every Gautenger. “We will fight e-tolls with all of our power,” Maimane promised. “And we will give you the decision by having a referendum directly against e-tolls.”

All in all, the DA rally on Saturday was an impressive spectacle: well-attended and slick, and proof yet again that the DA in Gauteng has become a force to be reckoned with. The ANC might not be in for the ‘big shock’ that Zille predicted, but they certainly should be worried. DM