South Sudan: what happens when the rains come down? 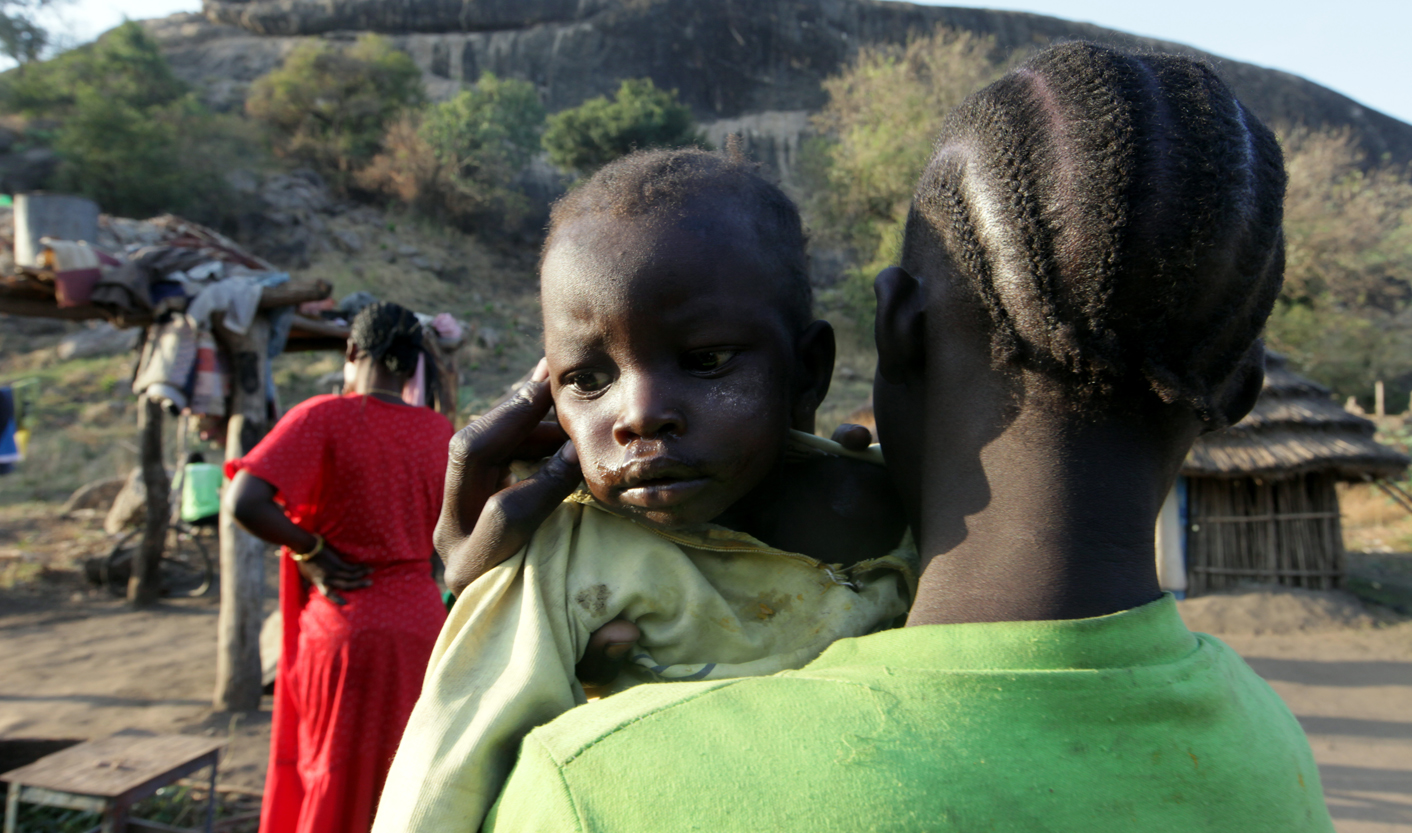 If you think South Sudan is in bad shape now, think again. It could get worse. A lot worse. In May, the rainy season begins, and the country is hopelessly unprepared for the deluge. By SIMON ALLISON.

Whichever god you believe in, he was in a good mood the day he created South Sudan. Aside from the huge reservoirs of oil upon which the country sits, it boasts vast swathes of some of Africa’s most fertile soil, a gentle, forgiving tropical climate and a rainy season which arrives like clockwork every May – not to mention year-round sunshine. Unlike in the harsh desert scrublands further north in Sudan proper, food grows here, in abundance. No one should go hungry.

Humans, however, have a strange way of squandering their good fortune. South Sudan, for all its natural blessings, is on the brink of famine – and it only has itself to blame.

This May, when the rains come down, few farmers will have planted seeds in preparation. Still fewer will remain on their land to till and reap and profit from a plentiful harvest. And, in the unlikely scenario that the country does produce enough food to feed its population of roughly 11.6 million, it will be unable to distribute it properly along the unkempt dirt roads that pass for national highways and turn to thick, sticky mud at the first sign of drizzle.

Unless somebody does something drastic, South Sudan is going to starve.

The troubles began in December, when fighting broke out between President Salva Kiir and his deputy, Riek Machar. The two were arch-rivals in South Sudan’s long struggle for independence, and cooperation never came easy. Eventually, something snapped. Machar now leads an unruly bunch of rebels who have taken over several key towns, committing some horrendous atrocities along the way. President Kiir’s army, meanwhile, is desperately fighting to hold on to power. Both sides have engaged in ethnically-motivated violence against civilians.

After decades of civil war, South Sudan’s long-suffering population are used to conflict, even if they were hoping that the dawn of independence would make a difference. They know what to do when the fighting starts. In the absence of any respect for their lives and livelihoods, civilians understand their only safety is in escape – to safer parts of the country, to United Nations refugee camps, or across the border to neighbouring countries. At least 1,000 refugees arrive in Ethiopia every day. In total, around 270,000 South Sudanese have fled across borders; at least one million have been displaced from their homes and land. Some – the lucky ones – have made it to refugee camps. Others are scraping an existence in the bush or along riverbanks, relying on age-old hunter-gathering instincts to keep themselves alive.

For those who stayed behind, things are just as tough. Livestock herds have been dislocated from traditional migration routes; the planting season has been delayed and disrupted; and some markets have collapsed, leaving people unable to trade and barter. This is not to mention the psychological strain of living under the ever-present threat of further conflict, which is particularly pronounced in the states of Jonglei, Upper Nile and Unity, which just happen to be the biggest food producers of them all. In good times, at least.

Already, over a million people are considered by the United Nations to be “very severely food insecure” – that is, one classification away from famine. And this is before it starts raining.

The rains will complicate everything. It really does rain a lot. South Sudan gets an annual rainfall of 953mm, well above the world average and more than double that of South Africa. All of this arrives in the months between May and October, usually in the form of intense daily storms for which the country’s infrastructure, where any exists, is utterly unequipped.

The roads suffer the most. Famously, at independence in 2011, South Sudan had just 100 kilometres of paved roads. There’s a little more tarmac now, but not much more. The vast country is connected by dirt tracks, most of which haven’t seen a grader for years. Two-thirds of these become unusable during the rainy season, making obscenely expensive air transport the only viable way to move people and goods around. Usually, both government and humanitarian agencies (who perform so many government functions here) take this into account, building up stockpiles of necessary goods in vulnerable areas. The conflict has complicated this immensely, with fighters looting many of the existing stockpiles. The UN’s Food and Agriculture Organisation (FAO), for example, has lost 186,000 items of pre-positioned stores which it has struggled to replace.

The rains also bring floods. 1.5 million people live in flood-prone areas. This year, they are joined by another 300,000 displaced people, attracted to rivers as reliable sources of food and water. Always deadly, the floods this year could be catastrophic because of all the extra people – and because normal coping mechanisms, such as escaping to another part of the country, have been disrupted by the fighting.

Then there are the crops. In good times, with the land prepared and seeds planted, the rains are exactly what the farmers need. In bad times, like these, the rains signal the end of the planting season, and remind farmers that they’ve missed it.

Knowing all this, aid agencies operating in South Sudan are warning of severe food shortages in the months to come, with seven million people at risk. Some have even talking about a possible famine.

“Certainly it is not a foregone conclusion that famine will be declared in South Sudan, but the risks are there,” said Sue Lautze, FAO’s head of office in South Sudan, in an email interview with the Daily Maverick. “It is important to underscore that there is no famine right now, although there are today appalling levels of malnutrition, hunger, disease and death.”

“The most effective way to prevent famine is to stop the fighting. The people of a South Sudan are resilient and can find ways to survive a range of threats, but they must be given a chance to do so. So many of these strategies have mobility at their core – migrating with livestock to water and pasture, migrating to fishing grounds, traveling to urban areas for wage labor, etc. – but conflict makes these strategies too risky.”

Michelle Delaney, Public Information Officer for the South Sudan Office for the Coordination of Humanitarian Affairs, concurs. “A political resolution to the conflict is the most direct way to avoid a famine. Fighting must stop now so that people have access to plant, fish and rebuild their livelihoods. Aid agencies must have access to communities in need so that they can deliver food, seeds, tools, fishing equipment and animal health services, along with health, nutrition, water and sanitation assistance.”

Failing a political solution, aid agencies are desperately trying to recreate stockpiles and distribute supplies. The FAO offers special emergency livelihood kits which could help, but between the fighting and funding issues they have only been able to distribute to 44,150 households; they have identified another 395,859 households that are in dire need. The kits include vegetable and crop seeds and hoes for planting, or twine, hooks and nets for fishing. Overall, the funding shortfall for the humanitarian response is massive: the Crisis Response Plan is only 36% funded, leaving a shortfall of US$791 million. This makes emergency preventative measures extremely difficult to implement.

Alas, a political solution still seems a long way off. A third round of talks between the government and the rebels began in Addis Ababa this week, but little progress has been made. Representatives can’t even agree on a draft agenda, never mind a peace deal. Despite this, every cloud has a silver lining, and South Sudan is no exception: the coming rains should at least slow the pace of the fighting.

“We can only hope that the same logistical challenges that plague the humanitarian operation similarly stymy military operations,” said Lautze. There is precedent for this: historically, Sudan and South Sudan’s various armed groups have fought in the dry season and used the rainy season as a chance to regroup and recuperate.

Not that this is much consolation to the people already struggling with the consequences of the senseless conflict. In 2011, 98.83% of South Sudan voted to secede from Sudan proper. They were hungry for change. Three years later, with rains about to exacerbate the situation, they’re just hungry. DM