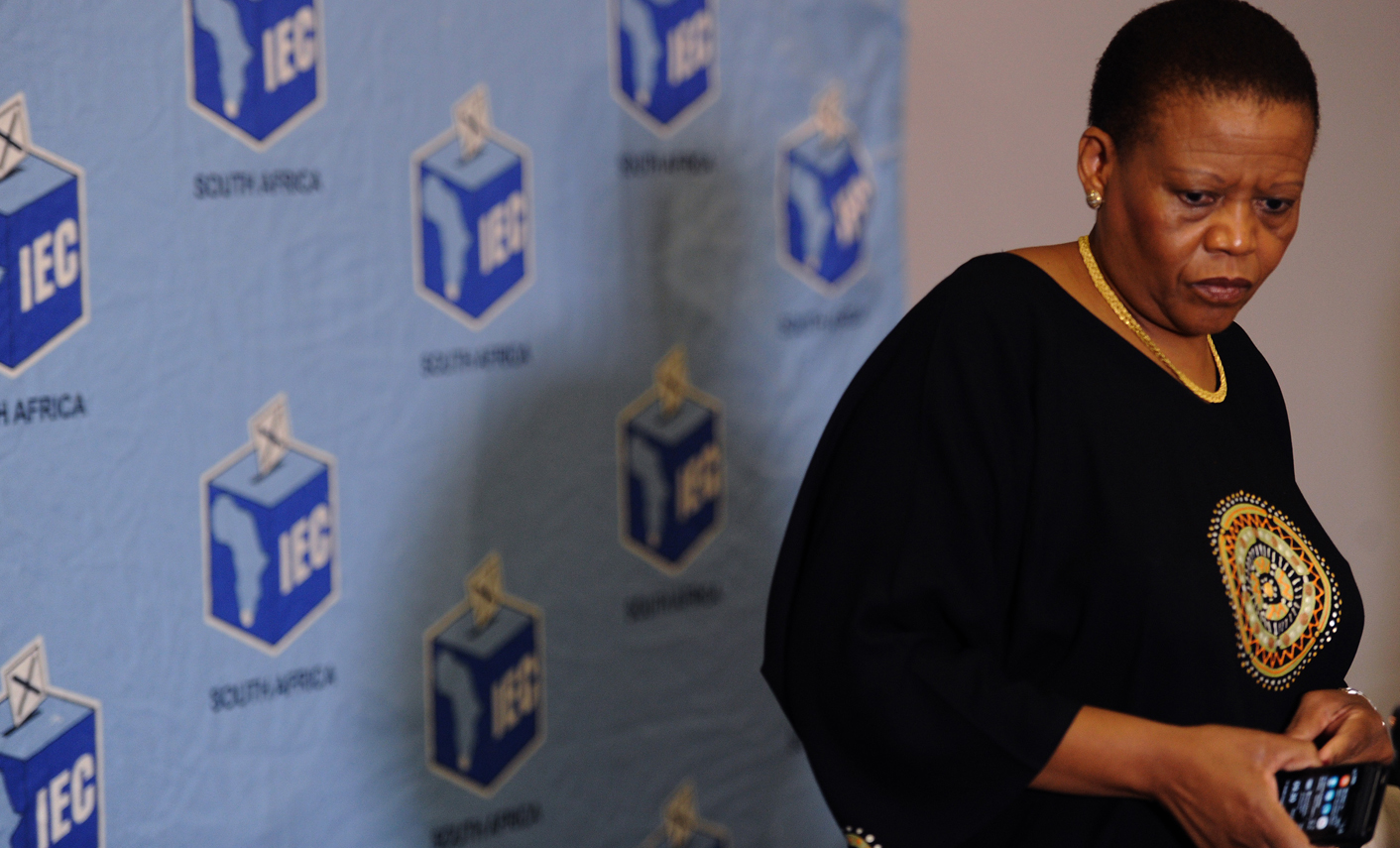 Any hopes of the Independent Electoral Commission issues being settled by sober minds - and thoughtful decision-making - have puffed away in the dust. On Tuesday the Electoral Court, in a first for South Africans, decided it must sit as an inquiry, and make a formal decision about whether Pansy Tlakula is fully fit to hold her office. In other words, just five days before an election, we are going to see three judges starting to hear whether the person in charge of the elections should actually be involved at all. And if they decide against her, it goes to Parliament. As the clock ticks down. By STEPHEN GROOTES.

You have to feel for Pansy Tlakula’s legal team. Advocate Daniel Berger has a reputation of his own, but no one really wants to go up against Advocate/Professor David Unterhalter, the man who defended e-tolls, no less, who helped ICASA win its case against MTN and Vodacom. In this case, it’s not so much about the lawyers, but about the arguments available to them. On Tuesday morning, the five opposition parties (all small, but in this case, as we shall see, size really doesn’t matter) brought their application to the court asking for it to recommend that Tlakula be removed. That would start the machinery, the judges recommend: the National Assembly sits (Nkandla-style!) and then the president suspends.

The parties went first, and after Unterhalter had finished, everyone went off for lunch. When the judges came back, led by Judge Lotter Wepener, it was clear they wanted this inquiry. They wanted to know what Tlakula did in relation to that headquarters leasing deal, how it related to the fact that she was involved in a business relationship with Thaba Mufamadi, who is now on the ANC’s electoral list, and whether all of that, when taken together, constitutes misconduct. And Wepener, speaking for the court, said that in light of the time issues, they were minded to order an inquiry to be held on Friday.

Tlakula’s lawyers simply couldn’t accept that. Berger pointed out, in various ways, that it would be unfair for her to have to prepare for such an inquiry in such a short time. He also said that this would mean that Parliament would simply not have the time to act. It was, he suggested, a “textbook case” of self-created urgency.

Throughout his argument he was peppered with questions by Wepener. Rarely have I ever seen a judge so engaged in a case, so full of probes, inquiries and nuggety suggestions. It was clear that Wepener, as one of the three judges, believed that there was at least a case for Tlakula to answer, and that it must be answered before the elections.

Unterhalter did not get the same treatment. He spoke, as he does, in beautiful legal prose. The killer argument was probably this: If the claims against Tlakula are wrong, then her name will be cleared before the election. If the claims are correct, then South Africa will be spared having someone of questionable integrity presiding over its elections. It would, he suggested, be the worst possible scenario to decide to only hold this investigation after the elections, and then find that Tlakula’s integrity is in fact not up to scratch.

Hanging over this in some kind of inglorious Technicolor is the question of whether a party, a losing party, would decide it would be a good idea to declare the entire election null and void because of this. You can imagine Julius Malema in full cry on the issue.

Unterhalter also had a strong case on whether the National Assembly would act. Several times advocates and judges referred to the ad hoc committee on Nkandla, recently deceased. Berger clearly felt that Parliament might not act, and certainly wouldn’t have time to do it properly. Unterhalter was simply not fazed. That’s not the point, he said; we have to follow the Constitution, if Parliament fails to act, well, then, we can go to the Constitutional Court if we have to force them to act, before the elections. In other words, judges here can’t decide what Parliament would do, and what it would not do. That is up to Parliament.

Now, folks, I like a dramatic late-night court drama as much as the next person. In my time, I’ve done several of them. They’re always fun. But seriously, a late night sitting on Constitution Hill, hours before the polls open? I think that’s more than even my political/legal addiction could bear.

In the end, it seems to come down to one issue: whether Tlakula’s right to fair process is trumped by the nation’s right to the perception of a properly legitimate election. It might seem obvious that Tlakula must go.

It is also easy to say, at this point, that if there is any claim against you, then, because of the importance of this role, of being chair of the body running our elections, then you must go. But as extreme voices grow in our politics, so demands for establishment figures, like Tlakula, to go, will only grow. It would be silly to leave just because one or more parties demand that you do. They need more than just allegations; they need a proper legal basis.

It is this legal basis that is now going to be tested in court on Friday, in a hearing that could lead to huge political and legal drama. Which could all be avoided, if Tlakula just decided to take a week’s leave next week.

Only in South Africa. Feel it. It is here. DM

Photo: IEC chairperson Pansy Tlakula is seen at a meeting with representatives of farmer unions in Benoni on Wednesday, 22 January 2014. Picture: Werner Beukes/SAPA