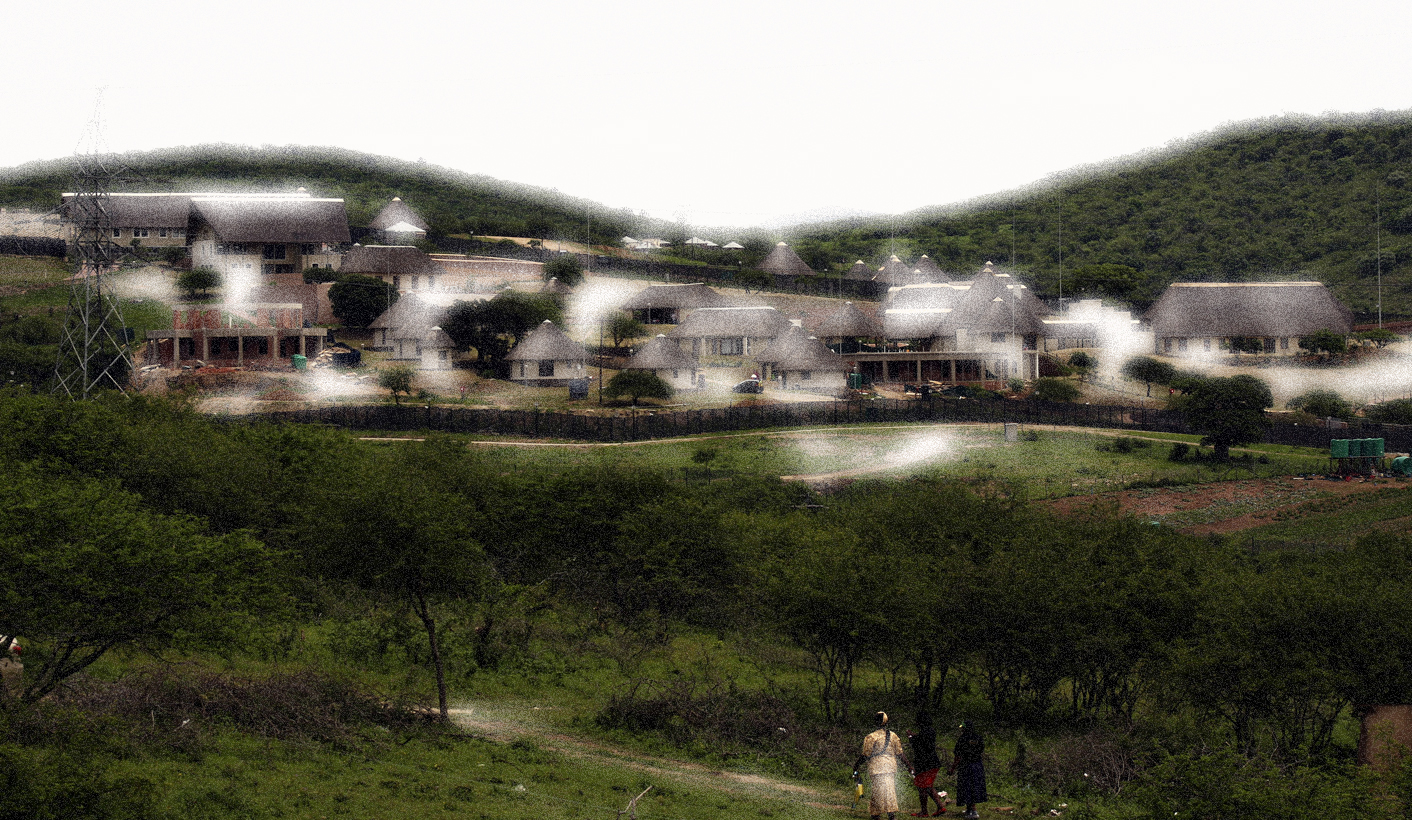 It’s official: nothing of any value will come out of the Parliamentary committee set up to consider the President’s response to the Public Protector’s report on upgrades to Nkandla before the elections. That dream, always faint, is now dead, seen to by an ANC majority on the committee. They insist that the committee can still be re-constituted after the elections, but we’re not holding our breath. Let’s all just take comfort that we’re not living in a democracy where people who question the President end up in body-bags – as one ANC MP on the committee reminded us. Comforting. By REBECCA DAVIS.

When the ad hoc Parliamentary committee on Nkandla met for the first time last week, chair Cedric Frolick (an ANC MP) warned that the committee should ready themselves to work late into the night on Monday if necessary.

It was not necessary. The committee needed less than four hours to dissolve things altogether. These were hours taken up in the main by statements from committee members lamenting how short the time available to them was to do the work that they were clearly not doing. It was farcical stuff. ANC MPs repeatedly denied that they were deliberately filibustering, but MP Llewellyn Landers, in particular, proved adept at the art of delivering rambling meta-commentary on proceedings in a painfully slow and drawn-out manner.

The major issue that chair Frolick had said he’d seek counsel on before Monday’s meeting was one which would cast a long shadow over proceedings: clarification as to the committee’s actual scope. What was it actually empowered to do? Could it look into the whole murky saga of Nkandla, or simply the president’s response to Thuli Madonsela’s report?

In terms of the specific mandate of the committee, Frolick indicated that the focus should be on President Zuma’s one-page response to Parliament regarding Nkandla, but that other documents – including the Public Protector’s report – could be considered within the context. Frolick acted quickly to dash the hopes of opposition politicians calling for Zuma to be summoned before them to explain himself. (Zuma had been at Parliament just an hour previously, unveiling the new bust of former president Nelson Mandela.) Frolick said that the committee should “confine itself to its mandate”, and that Zuma would not be subpoenaed.

For the next few hours, the committee verbally wrestled with procedural issues – even though it seems likely that the outcome was a foregone conclusion for the ruling party’s MPs. They tussled over the status of the Public Protector’s report, with the DA’s Lindiwe Mazibuko objecting to it being relegated to a “related document” in terms of the scope of the committee. ANC MP Buti Manamela reassured the opposition that it would be “absurd” to consider the president’s response without looking at Madonsela’s report, but went on to label it “incidental”.

Mazibuko called for the committee to hear in person from Madonsela, who had previously indicated her willingness to appear; from the author of the inter-ministerial task team report on Nkandla, which differed significantly from Madonsela’s report; from the head of the Special Investigating Unit (SIU), whose report on Nkandla Zuma said he was waiting for; from Defence Force bosses; and from CASAC, the Council for the Advancement of the South African Constitution, which made a submission to the committee suggesting that the SIU was not the appropriate body to investigate Zuma.

The obvious question was: when would all this get done? The committee’s deadline was set to expire on Wednesday. Mazibuko wanted to see the committee work every day of the coming week, and extend the deadline until midnight before the elections, a proposal largely supported by opposition politicians on the committee with the exception of the IFP’s Narend Singh, who voiced hesitation about whether it would be practically possible to get the witnesses in front of the committee within this timeframe.

ANC MPs contended that an extension till next week would still not provide enough time for the committee to do its job properly. Mazibuko herself had said last week that the process should not be rushed, Landers argued; by necessity, the committee would have to perform a rushed job. Landers suggested smoothly that the committee should be looking for further civil society submissions, beyond that of CASAC, and that this too would require more time.

The ANC’s Cecil Burgess wanted to know what would happen if the committee did not complete its work in the allocated time. Chair Frolick put the question to the secretary of the National Assembly, who confirmed that the committee would cease to exist on midnight of the 6 May, but it could be resuscitated by the next Parliament. It was important to remember, Frolick later stressed, that “the institution of Parliament will continue to exist after 7 May”.

ANC MPs also hinted that the timing of the release of the Public Protector’s report was suspicious, coming just before elections. (Public Works Minister Thulas Nxesi took this line of conspiracy a step further on the campaign trail this weekend, reportedly implying that TIME Magazine’s recognition of Madonsela’s work may be connected to attempts to destabilise the ANC by foreign elements.)

The Freedom Front Plus’s Corne Mulder hit back, saying the major reason for delays in the release of the report was that President Zuma delayed answering Madonsela’s questions for nine months, and still failed to answer a large number of the Public Protector’s questions. “You don’t want this discussed before 7 May,” Mulder charged the MPs from the ANC ranks.

Mulder also pointed out that the committee would have had more time to go about its work if the ANC had not taken eight days, of the allocated 10 set down in Parliamentary rules, to announce which MPs would join the committee.

Tempers flared as time passed. Mazibuko described the state of affairs as “shameful”, and said that the ANC’s clear desire to “kick for touch” was an attempt to shirk responsibility. Sporting metaphors were the order of the day, with Burgess saying in response that the committee was clearly in “injury time”, and that the committee was in a no-win situation time-wise. If they tried to do some work before the expiry of the deadline, Burgess said, they would be damned for not doing enough; if they did no work, they would be damned too. “Is it our fault that there is no time left?” asked Burgess.

“Yes,” replied opposition politicians, who repeatedly charged the ruling party’s representatives with filibustering and delaying to prevent the committee from dealing with any damaging Nkandla-related information on the eve of elections. “We’re in talks about talks!” Mulder cried in frustration at one point.

The issue at the heart of it all was the conceptual confusion about what the committee should actually be doing, a matter which failed to be clarified. The DA clearly had in mind a forum in which the upgrades to Nkandla would be pored over and scrutinised, and President Zuma’s misconduct further exposed and entrenched in the public consciousness on the eve of elections. Chair Frolick more than once instructed Mazibuko to stop referring to the committee’s duties as an “investigation”.

For their part, ANC MPs seemed determined to restrict the committee’s purview as much as possible to simply looking at the president’s response to Madonsela’s report – a report which, they hinted, would not be taken lying down. Manamela said that Madonsela should be questioned on why “certain investigations” were not concluded; why she exceeded her powers and authority; and why she gave conflicting indications of when she was willing to come to Parliament to discuss reports.

The prize for ‘most disturbing language use of the day’ went to Manamela, who said it was a sign of how “mature” South African democracy was that the president could be subjected to investigation without “people turning up in body-bags after”.

Given an opportunity to clarify this statement later by chair Frolick, Manamela repeated: “In many countries or democracies, when people ask questions…they re-appear later in body-bags”.

An end was brought to clearly pointless proceedings by ANC MP Doris Dlakude reading out a motion for the committee to adopt. It stated: “The time available for the committee to complete its work is clearly insufficient. Related investigations [the SIU report] are as yet incomplete and the matter before the ad hoc committee is of extreme importance and therefore requires sufficient time to consider thoroughly to do justice to it. Accordingly, the ANC proposes that this matter be referred to the fifth Parliament for consideration.”

Opposition MPs responded with anger, with the DA’s Wilmot James accusing the ANC representatives of having their minds “exercised on your behalf by Luthuli House”.

ANC MPs made it clear that they believed opposition MPs had arrived at the committee hoping for some damaging anti-Zuma outcome to fuel the last days of election campaigning. Opposition MPs, meanwhile, made it clear that they believed the ANC MPs had arrived willing to do anything necessary to prevent the committee’s work taking place. “You came in to this meeting with every effort to shut it down and you are using whatever tactics possible to shut it down,” the DA’s James said.

But with the ANC majority on the committee, the motion easily passed.

Speaking to journalists after the meeting, Manamela went so far as to suggest that if the committee had gone ahead with its work in insufficient time, they would have essentially “colluded with white-washing” the Nkandla scandal. He conceded, however, that there was no actual guarantee that the incoming Speaker of the next Parliament would reconvene the ad-hoc committee to take up the task, but suggested that it would be hard for him or her to ignore the fact that it was still hanging over them.

Mazibuko explained to the Daily Maverick that the committee could be reconstituted in the next term if someone submits a motion to do so, and the House votes in favour.

But don’t bet on it. “It’s not gonna happen,” Mazibuko said grimly, predicting that the ANC would use its majority in the House to shut down the possibility of resuscitating the committee again.

So there we have it, folks. Optimists will be awaiting the moves of the next Parliament to get a re-formed committee busy working on the matter – though after the elections, of course, much of the momentum in either direction will have faded. (As one journalist pointed out, if the committee does get reconstituted, a delicious possibility would be the presence of the EFF’s Julius Malema on it.)

For now, however, one last opportunity to hold Zuma accountable for Nkandla before the elections has gone. But look on the bright side: at least we’re not all in body-bags. DM