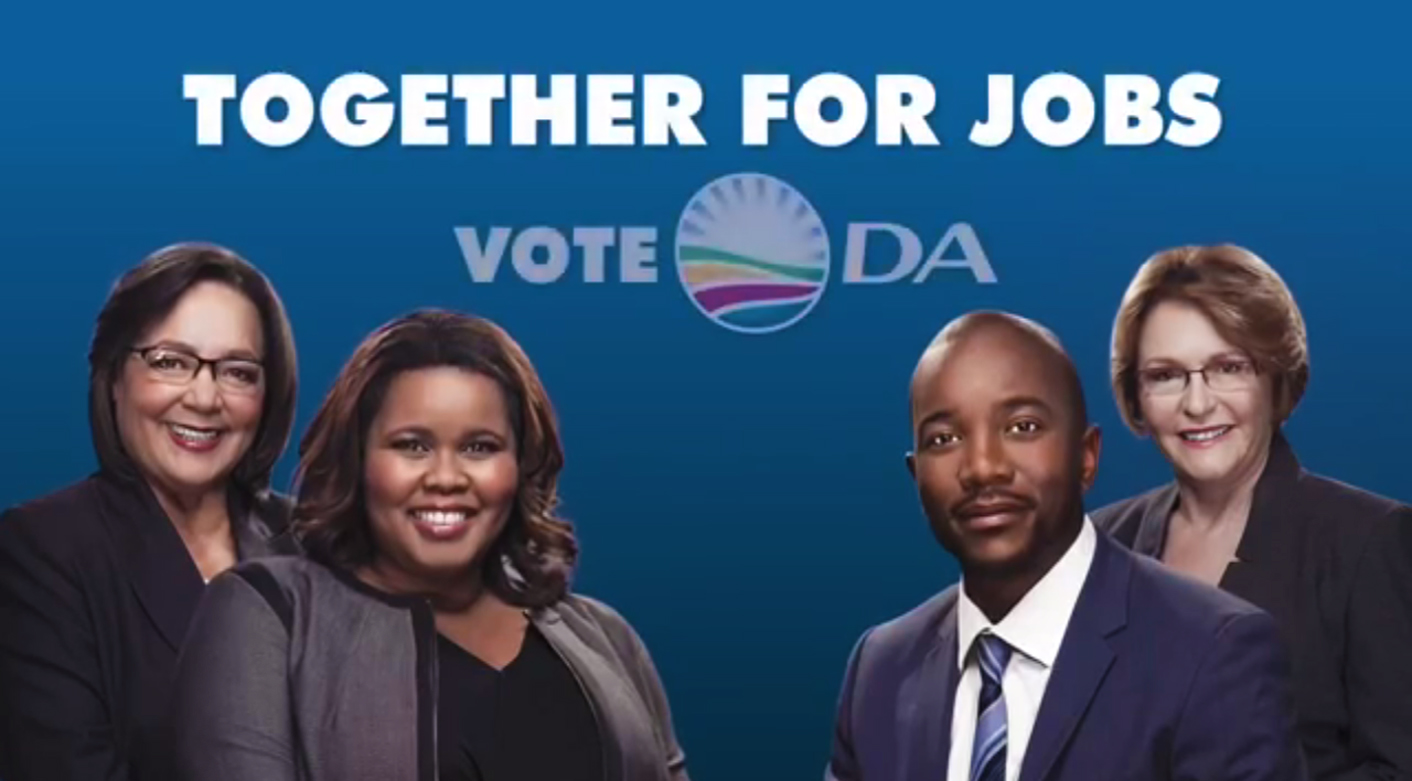 Slow zoom in. On a girl, perhaps 5 years old, picking petals from a flower. Her name is Daisy.

Zoom in. Focus on one of Daisy’s irises, terror mounting.

Voiceover (Lyndon B. Johnson): These are the stakes. To make a world in which all of God’s children can live, or to go into the darkness. We must either love each other, or we must die.

Voiceover: Vote for President Johnson on 3 November. The stakes are too high for you to stay home.

The dust-blown, smoke-strewn, Highveld human baking-tray of Mamelodi is not the first place one thinks of for a television premiere. And yet this is the place that Helen Zille and her Democratic Alliance have chosen to debut the follow up to their smash-hit political commercial Ayisafani. I should probably have situated “smash hit” between inverted commas, mostly because it’s impossible to quantify the impact of any South African political ad, and even more difficult when that ad has been banned by the state broadcaster. Still, Ayisafani has, as of this writing, accrued 646,940 views on YouTube—roughly equivalent to a massively unsuccessful kitten video—and made enough noise to justify the greenlighting of a sequel.

Like most sequels, Ayisafani 2: Mmusi Goes Positive, is a little dumber, a little louder, and fails to bank on what made its predecessor so powerful—i.e. repeatedly kicking Zuma’s ANC in the crotch. But before we get to the clip, we must marvel at the DA electioneering machine, greased into a soundless whir by almost five months of campaigning. The Blue Wave slides into Mamelodi like a samurai sheathing a sword, pausing at the intersection of Solomon Mahlangu and Hinterland Avenue in order to wait for a full compliment of t-shirted DA supporters to amass.

Which they do. A gogo Helen Zille’s age dances in a circle of her fellow centre-rightists, followed by a girl young enough to be her granddaughter. Shortly, the fun is spoiled by white guy in neon who barks us into order. The 1,500-strong DA flock obediently gathers behind the party truck. The march involves a 2km trek along Hinterland, which has a Good Story To Tell—baby bottom-smooth asphalt; electricity strung out along a long line of RDP houses; Pick ‘n Pay Express by the petrol station. On this Freedom Day Monday, the main drag in Mamelodi speaks to twenty years of progress. The problems happen when you step off Hinterland into the backstreets that lead to a tumble of shacks on the township’s southern flank. Mamelodi is thus a precise summary of South Africa’s successes and failures—abject lean-tos alongside the finest rims ever riveted to a late model BMW M5.

Madame Zille is at the front of the crowd, surrounded by marshals and the “kwaito officials” who extol the virtues of Madame Zille, Gauteng premier hopeful Mmusi Mamaine, parliamentary speaker Lindiwe Mazibuko (absent), and the Public Protector Thuli Madonsela (most definitely absent). Zille is so exhausted that she has grown pale enough to serve as a parody of the white person she is so often accused of being. Like most people you meet these days, she’s had some work done, and she looks simultaneously polished and worn. She hops up and down in her blue Adidas running shoes, her skin the parchment thinness of someone about to succumb to consumption. March, bus, march, speech, bus, interview, march, fly, bus, speech. Every day since January. The DA machine is oiled, as I say. But weary.

We arrive eventually at an open field with some dismal playground amenities. At the far end of the expanse, a stage has been assembled with Mmusi’s face emblazoned above it. A bright outdoor screen has been set up, on which Ayisafani 2 will shortly debut. But not before Mmusi, in a DA golf shirt and jeans, reminds us of what a disaster Zuma has been. “We have two stories on the table,” yells Mmusi. “The first is the story of Zuma whose cattle and chickens have a better life! We must liberate ourselves from the liberators,” insists Mmusi. “You can’t talk about freedom unless you can talk about jobs.”

The DA, as you may have noticed, talk about jobs a lot. As I listen to Mmusi speak, I get the sense that jobs will be almost as vital a character in the new Ayisafani as Mmusi himself. Madame Helen, I’m equally sure, will not appear in the new video. And that’s a shame. When she dances up to the podium to the strains of her battle song, by the young South African singer-songwriter Zahara, she’s in fighting shape. “They will ban our advert on television,” she yells, “and we will show it everywhere!”

The original Ayisafani is not what I’d consider a high point in the art of televised political dissembling, but leave it to the SABC to transform it into a classic. The state broadcaster refused to air it on television, because it was so inflammatory that it would incite the country to prosecute an orgy of unbridled violence. But we’ve learned over the years that the SABC, much as it was in Apartheid days, is the ruling party’s Audio Visual club. Therefore banning opposition party adverts doesn’t count as censorship, but the exercising of aesthetic sensibility. This has always been a country that has enjoyed using a pair of scissors.

Anyway. Describing Ayisafani 1 is as pointless and as dull as recalling a dream, but here are the main talking points: it stars Mmusi Mamaine in what appears to be a send-up of the final scene of P.T. Anderson’s Boogie Nights, in which porn star Dirk Diggler, played by Mark Wahlberg, performs a long monologue while staring in the mirror—a scene based in turn on Robert De Niro’s “I coulda been a contender” soliloquy in the last reel of Raging Bull, in turn based on a Marlon Brando scene in On The Waterfront. (You still with me?) Diggler ends his address by exposing his enormous member to the mirror, and on my first viewing of Ayisafani I was nervous that Maimane would do the same. Which would almost certainly have been grounds for the SABC to ban the clip. But he didn’t show his junk. He merely went on about how the ANC used to have good leaders, but now they shoot South Africans in the street and build palaces.

Ayisafani 2 also focuses on Mmusi, but this time—meta-alert!—he’s reminding us of the fact that Ayisafani 1 was not as well appreciated by the state broadcaster as it might have been. “So they tried to silence us,” says Mmusi, inside the same room in which the first clip was set. “But this is what they are afraid of…” A door opens, and he’s walking through what could well be Mamelodi. The strings aren’t horror-movie ominous, but Bette Midler-movie sappy. “We are growing, we are strong, and we can win,” Mmusi promises. He also offers higher education for matriculants, a million internships (?!), 6 million “real, permanent jobs”, and 65 million free copies of The Secret (I’m kidding about the last one.)

I’m not going to lie—I was hoping for something a little more nuclear. In this time of crisis, I was hoping for something like the Daisy ad that blasted Barry Goldwater out of the running in favour of Lyndon B. Johnson in America in 1964. I wanted to see Mmusi shed his grey suit and get into a ring with an ersatz Zuma, fulfilling the Raging Bull reference (by way of a reference’s reference) from the first Ayisafani. Black and white, blood and sweat splattering on canvas—or maybe I’ve just listened to one too many DVD commentaries over the years. It’s a fine commercial, but it will only resonate if the SABC is dumb enough to ban it. The battle cry that Zille and her Blue Army will yell heading into the final week of the election—after a sustained strategy of negative campaigning and pugilism—is a version of a Good Story to Tell.

Perhaps the DA should’ve nuked a couple of children. We’re in DEFCON 1, and just a few weeks ago, we could rely on Helen Zille to hit the big red button. Now, it seems, positive is the new negative. ‘We must either love each other, or we must die,” said Johnson, by way of W.H. Auden. I just wish the adverts weren’t so boring. DM