Analysis: Unity makes sense for Palestine, even if Israel’s not happy 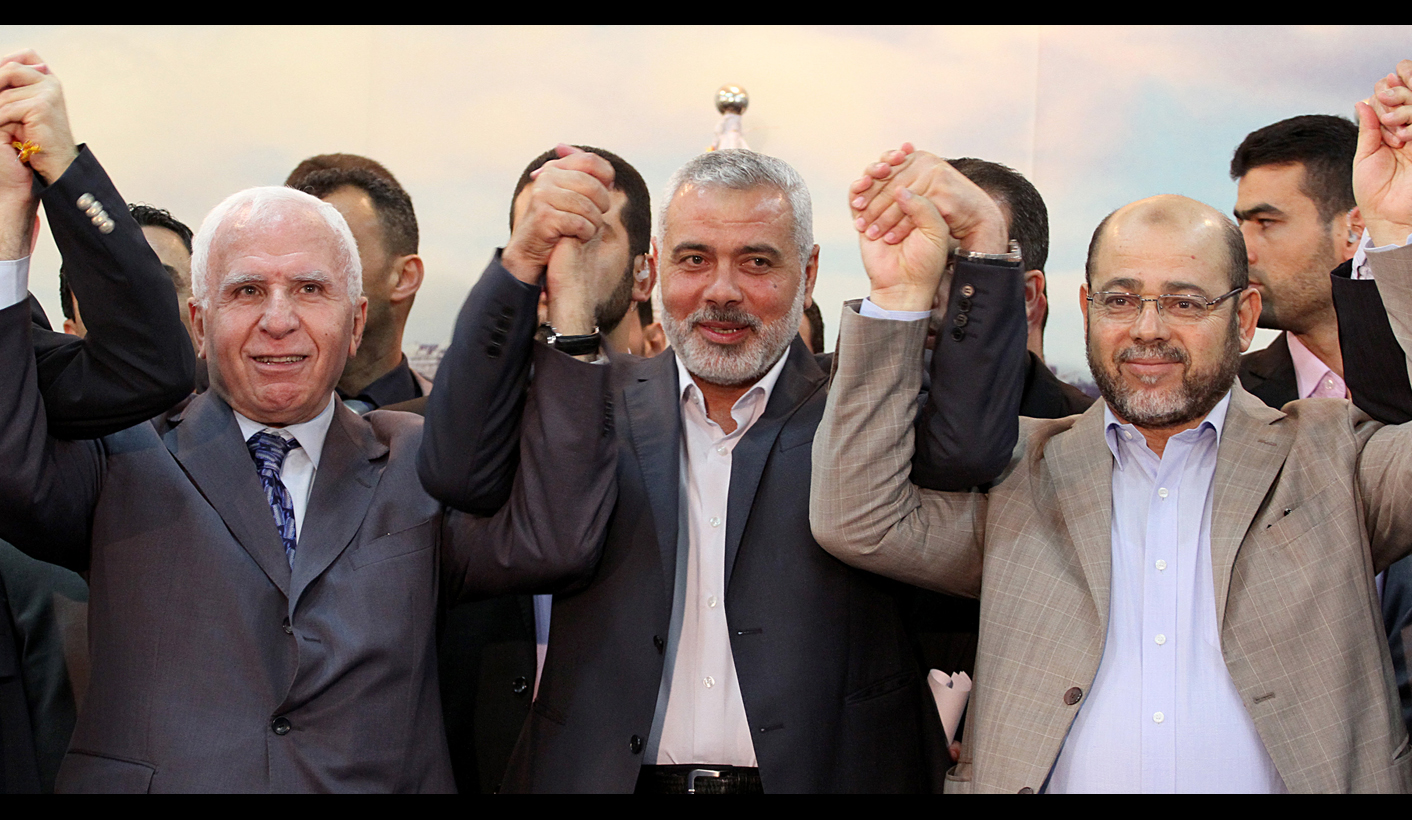 After years of internecine squabbling, Fatah and Hamas have finally decided to try to get along. Should they make the reconciliation work – and there’s no guarantee that they will be able to – Palestine will finally be able to speak with one voice. If, of course, an unhappy Israel can be persuaded to listen. By SIMON ALLISON.

On Wednesday, Fatah and Hamas, the two main Palestinian political groups, put their many and substantive differences behind them to announce the planned formation of a government of national unity. In theory, at least; there are still plenty of kinks to be worked out. Still, it is potentially a game-changing moment for the stale, stalled politics of the region. After all, what chance do Palestinians have of reaching some kind of peace agreement with Israel if they can’t even agree amongst themselves?

It’s not the first time that Fatah and Hamas have tried to get along. In the past seven years, there have been several attempts at compromise. None have endured, the historical enmity between the groups proving too strong. This time, officials insist, will be different. “We will forget what happened in the past,” said Azzam al-Ahmed, a senior Fattah official.

There’s plenty to forget. In particular, Hamas will need to forget how Fatah – the party of Yasser Arafat, who see themselves as Palestine’s anointed liberators – refused to recognise the results of the 2006 administrative elections, which Hamas won comfortably. Fatah held onto power in the Palestinian Authority, based in Ramallah in the West Bank, and fought pitched street battles with Hamas in Gaza, a Hamas stronghold. Fatah was dumped out of Gaza, creating two de facto, non-contiguous Palestines: Mahmoud Abbas’ Fatah-led Palestinian Authority in the West Bank, notable for its entrenched corruption and poor governance, and for its proximity to the Israeli government; and Ismail Haniyeh’s Hamas-led administration in Gaza, which has a better reputation for providing services such as education and welfare to its people, despite living under a strictly-enforced Israeli blockade.

Fatah, meanwhile, will need to work hard to incorporate the far more radical views of Hamas into its generally more liberal philosophy. Crucial sticking points include the refusal of Hamas to recognise the state of Israel (unlike Fatah, which has long accepted the inevitability of the two-state solution); Hamas’s ambition of imposing Islamic Law on Palestine; and the activities of the Qassam Brigade, Hamas’s military wing, whose frequent attacks on Israel earned Hamas an official ‘terrorist organisation’ designation from the European Union and United States, among others.

The unity government only needs to last for six months, by which time new elections should have been scheduled. And chances for its success are boosted by the fact that both parties are under severe pressure – on their own, they are floundering. Mahmoud Abbas, despite engaging in yet another round

of negotiations with Israel, has failed to extract any meaningful concessions from the Israelis, who have brazenly increased the number of Israeli settlers in supposedly Palestinian territory (7,700 new settlers in the first six months of 2013 alone, with plans for tens of thousands more). This has not endeared him to his constituency. Hamas, on the other hand, is under huge economic pressure – not just from the Israeli blockade, which has taken its toll, but from Egypt’s clampdown on illegal tunnels into Gaza which gave the territory access to forbidden goods such as medicine, spare parts and KFC.

News of the reconciliation deal has enraged Israel. “Abbas must choose between peace with Israel and the unity agreement with Hamas, a murderous terror organisation that calls for the destruction of Israel,” said Prime Minister Benjamin Netanyahu. “He chose Hamas … He who chooses Hamas does not want peace.”

Avigdor Lieberman, Netanyahu’s hardline foreign minister, was even more blunt: “As long as there is an agreement between Fatah and Hamas, an agreement with Israel is not possible,” he said, adding that by signing the deal Abbas had destroyed negotiations with Israel. In fact, in the immediate aftermath of the announcement, it was Israel who cancelled planned US-brokered talks with the Palestinian Authority, on the pretext that Israel does not negotiate with terrorist groups like Hamas.

To underscore its disapproval, Israel launched a drone strike in north Gaza on Wednesday afternoon, which injured 12 people including several children.

Truth is, Israel is worried about the potential influence of a unified Palestine, speaking with one voice, on the direction of future peace talks. For years, Israel has perfected the art of ‘divide and conquer’ in Palestine, content to watch Palestinians fight each other rather than launch any meaningful diplomatic initiative which might force real concessions from Israel. This tactic is now under threat.

Israel is not alone in its concerns. The United States isn’t happy either, with the State Department expressing itself “disappointed” by the latest development. In particular, the suspension of the peace talks is a blow to secretary of state John Kerry, who has invested plenty of time – and staked a fair chunk of his reputation – in trying to resuscitate the negotiations.

For Palestine, however, the reconciliation deal – if the leaders of Fatah and Hamas can make it stick – represents a new start. After years of stagnation, in which no progress has been made with Israel, and Palestine’s issues have been pushed out of the limelight by newer, more immediate conflicts, this might be exactly what Palestine needs. DM