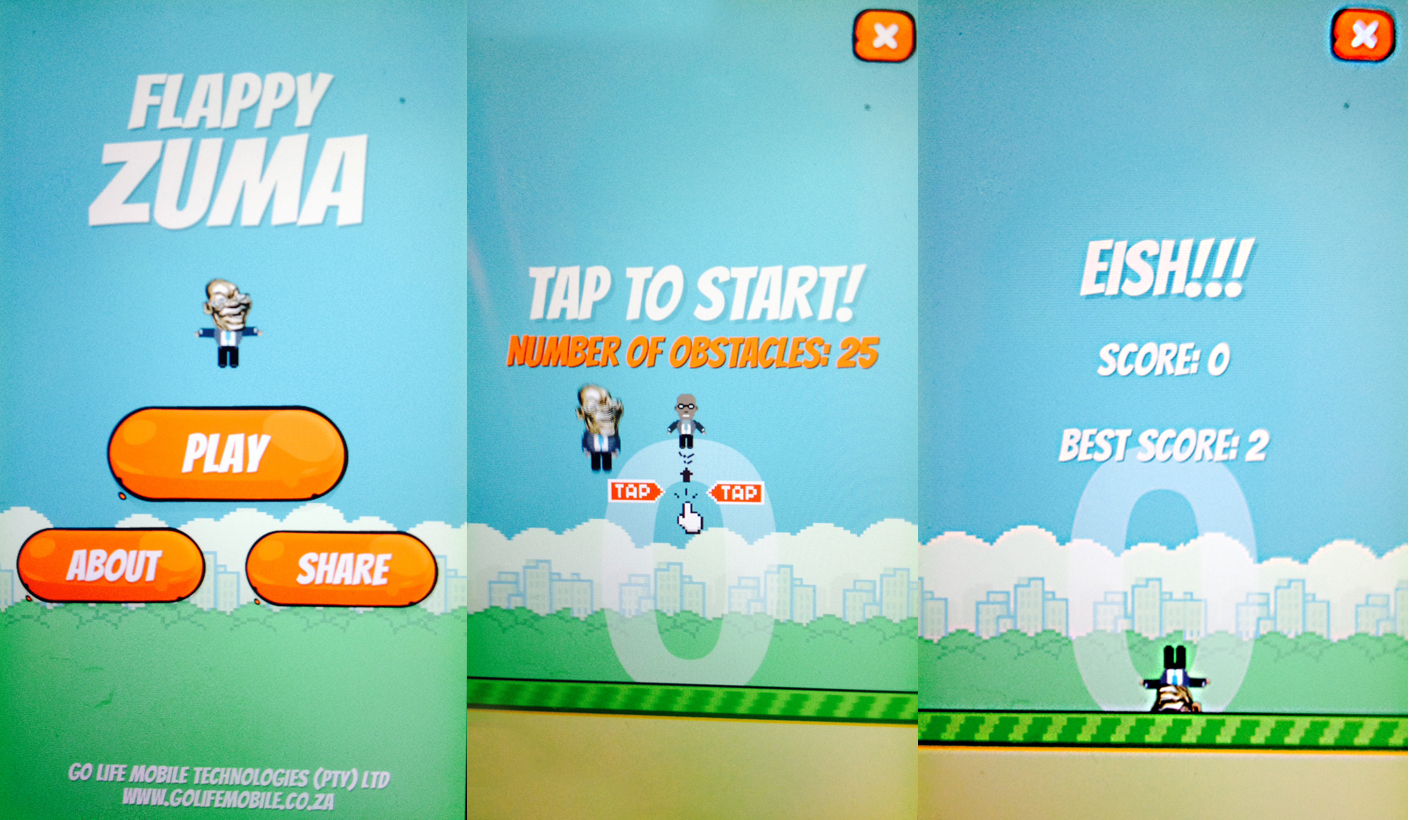 Want to get a sense of just how impossible the political reality of Jacob Zuma-led South Africa has become? Why not play Flappy Zuma? RICHARD POPLAK did, and he found that sometimes the tamest game in the world could make Grand Theft Auto look like a nursery school teaching tool.

Yesterday, the elections finally felt real for me: they became virtual. At about 9pm, a University of Witwatersrand video-game scholar named Kieran James Reid tweeted a link to a game called Flappy Zuma, urging me to give it a try. I downloaded it immediately, and was shortly confronted by a rendering of Jacob Zuma, flapping his arms above a pixelated city so leafy and free of burning barricades that I took it to be Cape Town. The objective of the game is to expertly guide our intransigent president between a series of obstacles, most notably shower nozzles, by dexterously tapping a finger on the iPad (or iPhone, or Android device) until such time as the screen screeches: “Victory!!! A shower would minimise the risk of contracting HIV/Aids” or “They revamped Nkandla without telling me. Why should I pay?”

I’d love to say I’ve actually earned one of those declarative statements, but I should admit that my index finger and my brain are only cursorily related, and that Flappy Zuma—unless you’re a four-year-old savant or a raging stoner—is absolutely fucking impossible to play. Virtual Zuma kept smashing into showerheads, tumbling toward “earth” and disappearing in a puff of pixelated smoke, much like Actual Zuma’s political credibility.

I’ll get to why Flappy Zuma made the 2014 elections irreducibly real to me in just a second, but we must first consider the mechanics of the game, its origin story, and why it exists in the first place. In gaming parlance, Flappy Zuma is a “gamey game”, or a puzzle game in the mould of Pac Man. It’s most recent antecedents would be Angry Birds or Candy Crush, designed specifically for the mobile experience, for gamers on the go. Flappy Zuma is a parody of a rip-off of Angry Birds, the astoundingly popular franchise in which a gaggle of birds—incensed by the fact that a sty of green, architecturally-challenged swine have stolen their eggs—are launched Kamikaze-like from a slingshot toward their snorting combatants.

Angry Birds has been purchased 12 million times from Apple’s App store alone, and daft as the game may be, I’m not one of those who believes it has erased 4,000 years of human intellectual evolution. It fact, I think of the game as a political experience, one that should help our children become better—or certainly more Machiavellian—leaders. By its very design, Angry Birds casts the gamer as an omniscient political consigliere, who literally taps into the rage of a pissed-off constituency and exploits that anger in order to win points, and damn the resulting carnage. Without the gamer, the birds would have no means to suicide-bomb the pigs; the dormant slingshot, hanging limply, would mock the impotency of their rage. Angry Birds, in my opinion, should be renamed Enabling Finger. But we must be specific: looked at through the rusty scrim of South African politics, the Angry Birds gamer is a proxy for Julius Malema and his Economic Freedom Fighters, who are merrily catapulting “enraged urban youth” into the piggish ruling party’s teetering political home. (By the way, I’m not the first person to consider the political subtext of Angry Birds).

Flappy Zuma is less gleefully destructive, and therefore more sobering. Again, if we were to look at the game from a South African political perspective—and I suppose in this case we have no choice but to—the Flappy Zuma player is not an Economic Freedom Fighter but a stalwart ANC comrade, and Jesus, that’s a depressing proposition in mid-2014.

The objective of Flappy Bird, the game on which Flappy Zuma is based, is for the godlike finger to keep a flapping bird constantly flapping between obstacles. Flappy Bird does not promote creative destruction, but maintenance. It does not demand chaos, but status quo. I have no idea whether this is why the good people at Go Life Mobile Technologies chose this particular game with which to satirise our president (they didn’t return my calls), but I’m guessing it is. The game perfectly elucidates what it must take to keep the current iteration of the ANC afloat: small tap, harder tap, slightly harder tap, no tap—smash!

In an interview he gave to the New Yorker, the brilliant essayist and game writer Tom Bissell noted that “[games are] about creating a space for the player to engage with the mechanics [of the game world] and have the world react in a way that feels interesting and absorbing but also creates a sense of agency.”

Agency! When was the last time a constituent in this country felt any of that shit? Flappy Zuma appears more real than reality because, for the first time during this election cycle, I actually felt the futility of being a South African circa 2014. The game’s genius is to remind us that a deadbeat leader requires the energy of a billion nuclear reactors, and this country runs on a couple of outdated plants farting coal smoke. Simply put, we don’t have the power to keep Zuma in power.

But he won’t go. So the ruling party, and the country along with it, is doomed to dish out tiny parsimonious taps on the national iPad screen, (in)actions we’ll only realise are untenable when our collective fingers cramp up and the game is truly over. In this, after the third and fourth try, Flappy Zuma is no longer quirky, but mournful and surreal and terrifying—like Francis Bacon nailed to a headless mannequin in the middle of a Free State wheat field. With each “Eina!”, with each overflap or underflap, I understood how far we’d all fallen.

Flappy Zuma may be the only way to properly experience South Africa on the cusp of its fifth democratic elections. After all, the game’s virtual reality is more real than the real one. Even if it looks like Cape Town. DM