Ronnie Kasrils and the God that Failed 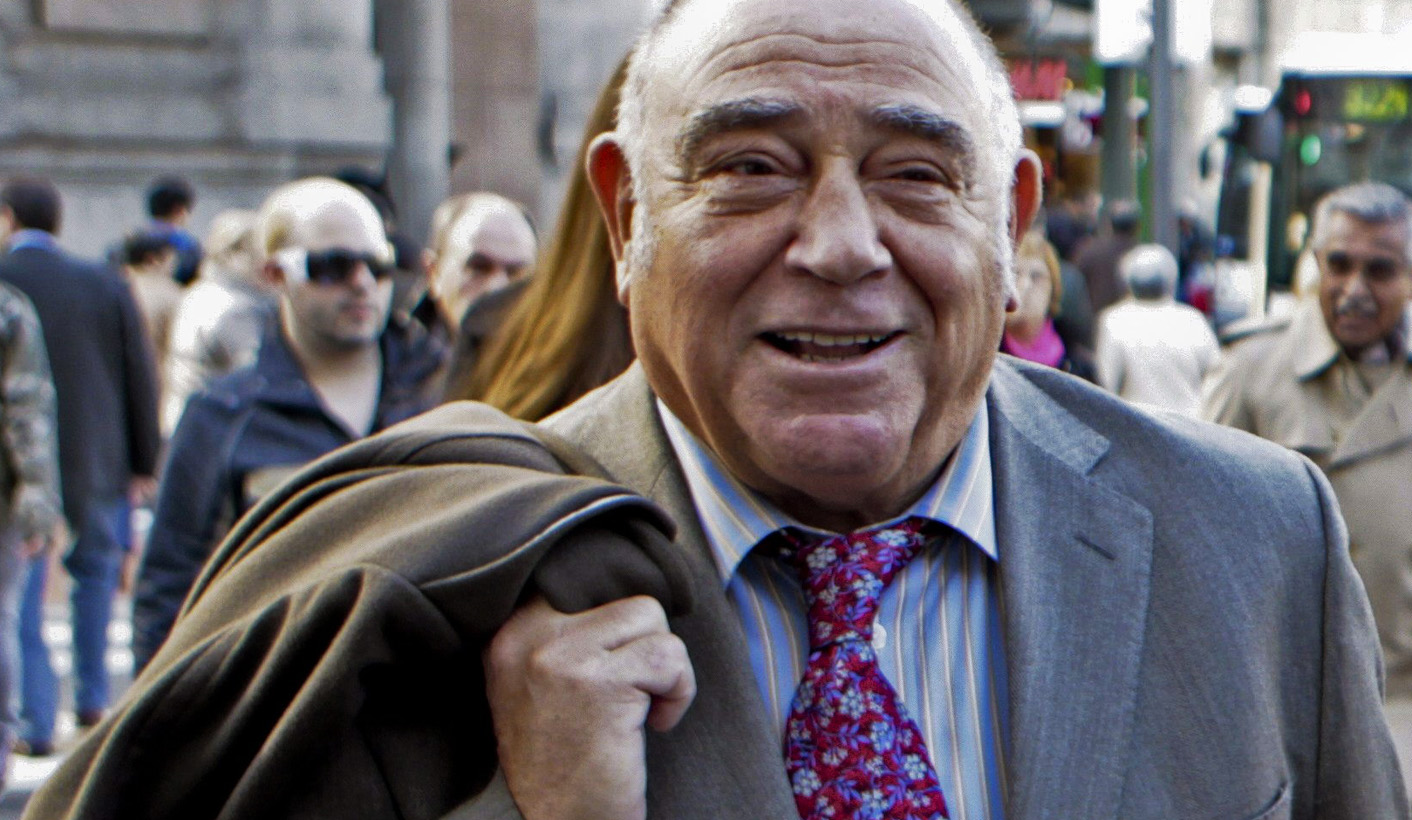 A small group of long-time ANC and SACP bigwigs have called for voters to withhold their support from the ANC in the 7 May election as part of a desperate effort to reform and cleanse their party and return it to its true routes. This is an extraordinary moment in South Africa’s political world – but will it have any real effect? J. BROOKS SPECTOR contemplates this development.

Almost certainly the most interesting place to be right now would to be privy to Ronnie Kasrils’ thoughts. Kasrils has been a senior stalwart of the South African Communist Party, the African National Congress, and the South African government for decades – including service with MK and the intelligence wings of the movement while in exile. After his return to South Africa, he served first as minister for water affairs and forestry and then as minister of intelligence – until 2008, when he resigned after Thabo Mbeki had been ousted as president.

And now he has done something so inexplicable to many that the ANC Youth League advised him, “If comrade Ronnie is still unhappy with the outcomes of the 2007 December ANC conference (where Mr Zuma was elected party leader), we advise him to get psychological counselling so that he may accept the current state of the ANC and South Africa.”

That’s a bit rough to say to a man who had given his all to the party, eh?

On Tuesday, Kasrils and several other (presumably now-former) ANC heavies such as former Defence and then Health Deputy Minister Nozizwe Madlala-Routledge will formally announce a campaign to call on ANC supporters to vote for any other party besides the ANC (or the DA), or perhaps just spoil their ballot if they can not bring themselves to vote for another party yet. This comes in response to a broad perception of a growing frenzy of out-of-control-snouts-feeding-at-the-trough corruption, as well as the continuing personal aggrandizement of the current president that has been dragging the political party they love into public ignominy.

In recent weeks, Kasrils – as with several other long-time senior officials such as Deputy President Kgalema Motlanthe, Planning Minister Trevor Manuel, ANC NEC member Pallo Jordan and former Director General of Home Affairs Mavuso Msimang – has become increasingly critical of the shenanigans in the governing party and its political leadership. Clearly there is a crisis of legitimacy within the party over the current leadership – one pitting these old standard-bearers of an earlier tradition against Jacob Zuma’s sycophantic subordinates and allies.

But this within-the-party crisis has been interacting with a broader unhappiness from the continuing fallout of the Nkandla fiasco and all the other scandals that threaten to overwhelm the party’s planned electoral message of a “good story to tell” from twenty years of ANC stewardship. These seem to be giving heart to the DA in its attempts to gain electoral headway – as well as encouraging the threat from the left in the shape of the EFF. Of course no one is saying the ANC will actually lose this upcoming election – but a diminished victory would be a bitter one, especially if there are visible defections from among the party’s usual backers.

According to various media comments from party officials, it would have been one thing to raise objections – even strenuous ones – within the ANC’s party mechanisms and structures. But it is another one entirely for such people to go public with their criticism – and then so much worse for them to take their dissents a dangerous step further in calling for people to vote against the mother party in an election now less than four weeks away. Even before their formal announcement, party structures and officials have been heaping scorn upon Kasrils and Madlala-Routledge as people who turned their backs on a party that nurtured and supported them and then walked away, and who, finally, were “treasonous” to it.

Has this been Ronnie Kasrils’ Damascene moment – the turning of his back on virtually everything his life had been about – up until now? Was he now – so late in life – finally confronting the “God that had failed” him? While Damascene conversion may a familiar term to many readers, referring as it does to Saul’s roadside conversion into Paul, from Jew to Christian; The God That Failed is the title of a 1949 book that had brought together essays by writer-intellectuals Louis Fischer, André Gide, Arthur Koestler, Ignazio Silone, Stephen Spender, and Richard Wright about their departure from former allegiances.

The six had each been members of their respective national communist parties. But, under the weight of cumulative realizations, first the Molotov-Ribbentrop pact at the beginning of World War II, then the realities of communist rule in Eastern Europe and Stalin’s Soviet Union, and then understandings of the likely conduct of their own parties should they come to power in their own nations, these authors had made painful, complete breaks with the parties that had sheltered them and given them a community and fuller purpose.

Political scientist Stanley Hoffman had written that this book brought together the ideas of “men of very different backgrounds and experiences, all attracted by the ‘glimpse of the Promised Land’ (Koestler), in search of a faith, indeed of ‘a conversion, a complete dedication’ (Silone), of ‘a state of historical- materialist grace’ (Spender). How the dream of fraternity and social justice turns into a nightmare of servility to party double talk and sudden turns, how the fellow traveller drops out and has to return to his own lonely road, is a story that forms a sad, major part of twentieth -century life, in Western Europe and elsewhere.”

But then Ronnie Kasrils was on radio on Monday where he dispelled any notion he and his colleagues were leaving behind the ideas they had so long espoused and acted upon. He insisted he remained a “true believer” in the goals of party, in spite of everything he had seen happening within that party recently.

Rather, he, and those with him, planned to cleanse their party of the impurities and corruption that had been taking it over from within. They would do this by working to withhold as many votes as possible from the Zuma-dominated party, sending these votes to any one of nearly two dozen other smaller parties – or even to a near-nihilist alternative of the spoiled ballot paper. This would be a message that could not be ignored.

Presumably, the underlying idea here is to generate a sufficient draining away of support from the party that the final voting statistics – so many more votes to the UDM, Agang, the KISS or Dagga Parties, the EFF, even the Freedom Front+, and thousands more voided ballots above the 250,000 in the last election – could convince reformers inside the ANC’s broad church to replace Jacob Zuma as party leader and anybody else still supporting him after 7 May. Kasrils made it clear, however, that urging people to vote for the DA was a bridge too far – its liberal capitalist ideology remains diametrically opposed to everything Kasrils believes in still. Reading those tea leaves still further, these outside-the-tent reformists presumably hoped to work with those still inside to lead a party annealed by this recent pain so that it would once again take up its mandate of achieving the promises of the Freedom Charter.

The challenge, of course, is that Kasrils and company run the risk of having their hopes cruelly dashed. If the numbers of those who heed the call are disappointingly meagre, or if the results lead to a slow purge of the ANC of any reformers presumably on their side, this clearly would not have been their desired outcome. Or it may be that voters do heed the call to withdraw some support from the ANC – but they choose, instead, to hand it to the EFF instead (or even, by some of them, the DA) in significant numbers – giving further comfort to the party’s external tormentors. Whatever happens, however, it seems increasingly clear Ronnie Kasrils and his colleagues will not be sitting in the pound seats come Jacob Zuma’s second inauguration. And it will be an increasingly cold winter for them once they are beyond the embrace of the movement they had lived for, all those many long years of struggle. DM