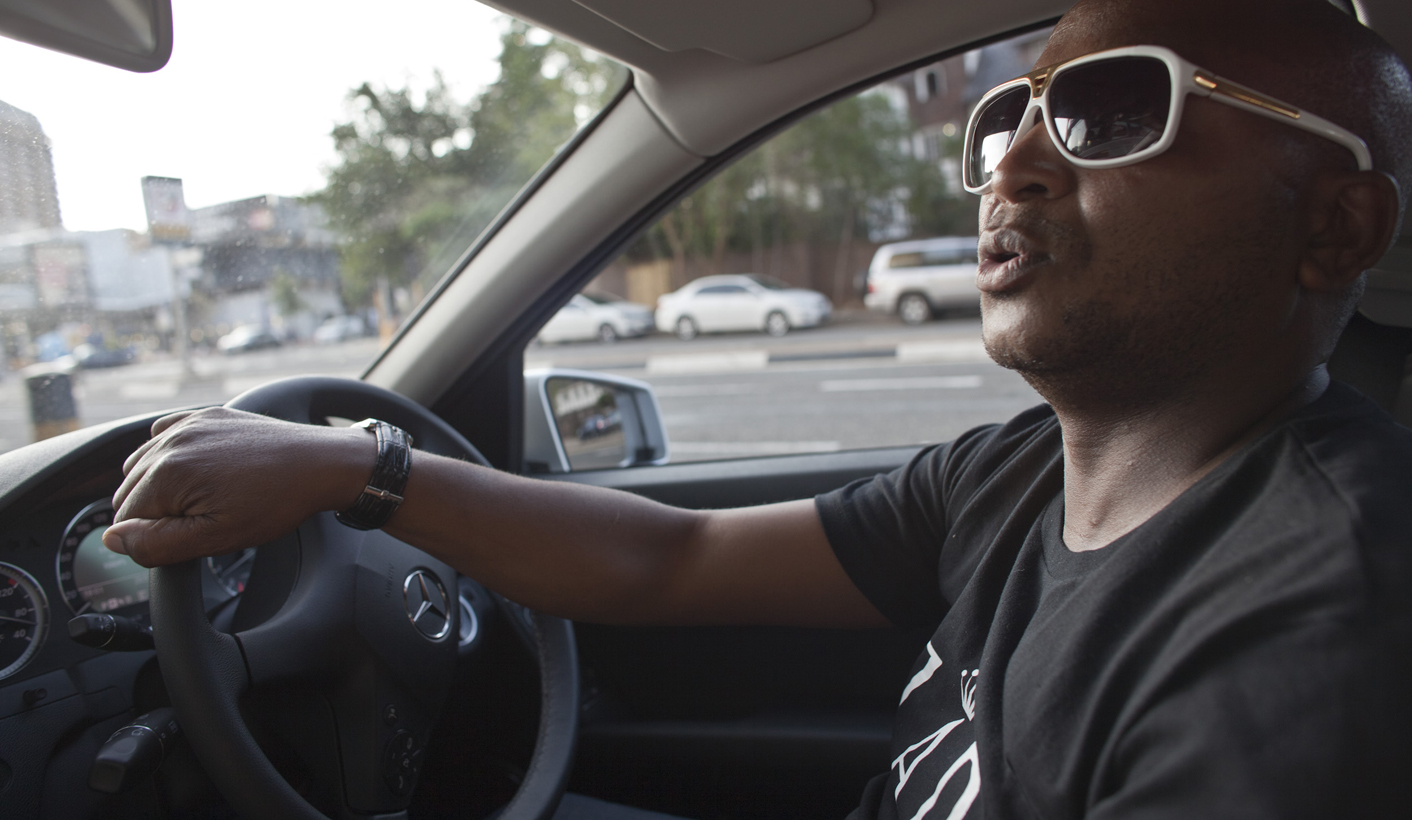 If it is true that a country gets the politicians it deserves, then ladies and gentlemen: Kenny Kunene! His Patriotic Alliance Party lurks on the IEC list as a merry reminder of our celebrity-obsessed, ca$h-addled culture. Yet Kunene, who is famous for being famous, just wants to help poor children, because no one else is. He kind of has a point, thinks RICHARD POPLAK.

Thing is, Kenny Kunene isn’t the biggest piece of shit in South Africa. Not by a long shot. There was a time when his antics seemed to represent all that ailed this country’s newest, rawest arrivistes—the upper middle class (black) entrepreneurs who hadn’t figured out how to blow obscene amounts of money behind their gold-plated compound walls. Kunene’s greatest sin was not his disgraceful behaviour—i.e. eating sushi off of semi-clad female models as nightclub-opening political stunt—but behaving disgracefully in public. South Africa’s hyper-elite traditionally kept their peccadillos on the QT, so Kenny was a little too Post Democracy for most of his detractors to handle. Kenny Kunene needed finishing school.

Kenny and ANCYL-era Julius Malema were long ago identified as a new breed of South African asshole—both men are these days spiffed up and ready for prime time. Malema appears more presidential than the president, and Kenny talks about helping children as often as Michael Jackson did, which is always a cause for concern. But his nascent Patriotic Alliance Party, Secretary Generalled by ex-sleazebag bank robber Gayton McKenzie, is apparently the real deal. “I wouldn’t waste millions of money if I wasn’t serious about it,” he says to me, as we drink coffee in the lobby of the Sandton Hilton. He’s done up all African Businessman Casual: premium denim, blue blazer, gold cuff links, lamb scrotum-soft loafers, a wristwatch the size of Burundi. The Patriotic Alliance will be kingmakers in the Western Cape, he assures me.

Go ahead and take an informal poll: everyone in the country knows Kenny Kunene. Yet no one knows what he does. Once upon a time, he was an English teacher. He turned to crime, and was arrested for Bernie Madoff-type shenanigans back in 1997, spending six years in jail. (“I haven’t been in front of a magistrate since that time,” he tells me). Then, he got into the Brave New South African economy of producing nothing. He won tenders. He ran the ZAR nightclub chain, and he ran it into the ground. In 2012, the Hawks were all over Kenny concerning a Central Rand Gold scheme, but nothing came of their investigations. Kenny’s money made money, and he pantomimed being rich, like an ersatz, backwater Donald Trump.

Finally, in a country in which basically the entire the leadership is bent, going straight is Kenny being subversive. He beats to the march of his own drum. Or something.

“It’s interesting,” he says to me, leaning back against his standard issue Emaciated Female Companion. “When you speak about individuals in this country, people only want to go back in the past. It’s been ten, twelve years since I was in jail, and the Constitution says that five years after being outside, you can go to Parliament. But when you speak about Apartheid, people say ‘No! Don’t bring up the past!’ That is the hypocrisy I hate. I did my time. Why do you want to put me in my past?”

Hell is burning, Kenny tells me, and it is burning for those in the ANC and the DA who, he implies, are worse crooks than he and Gayton McKenzie could ever have been. If he spares most of his opprobrium for the DA, it’s because the Patriotic Alliance, like any entrepreneurial outfit, has identified a gap in the market—in this case the Western Cape’s politically underserved coloured township community. He believes that the official opposition is a shill for white business, who want coloured communities hooked on meth and therefore too addled to cause any real trouble. He tells me that he has the inside scoop on the Public Protector Thuli Madonsela’s intention to become the DA’s presidential candidate for 2019—“and that’s why she doesn’t investigate all the bad administration in the Western Cape.”

Kenny once told The Star that “I was born ANC and I will die ANC.” This appears to have been an untruth, and one we can’t really blame Kenny for. “They say they have a good story to tell, but we have a true story to tell,” he says. “People are still being paid with wine on farms in the Western Cape, and the DA protects these white capitalist farmers. Yet they make a big issue of the white rhino in this country. No, bru. Things have to change.”

Kenny Kunene criticising the protection of craven capitalist behaviour is, broadly speaking, fucking preposterous. But he looks so troubled by it all that it comes off as endearing. There is, of course, the issue of his brief dalliance with Julius Malema’s Economic Freedom Fighters—his first, unhappy fling with politics outside the ANC’s tenderpreneur-gestating womb.

“I was never close with Malema,” he tells me. “He was not my friend. I see him here or there, we had a drink. We shared a political ideology in the ANC. He supported my businesses, so there was that”—Jesus help us—“but let me tell you, bru, Robert Green has a book called The Forty-Eight Laws of Power. First law? Never outshine the master.”

Where else in the world could Kenny Kunene outshine anybody? Sitting before me in the fading light of a fading chain hotel lobby, he doesn’t appear handsome or bright or particularly charismatic. In a word, he’s “huggable”. I first encountered him at Gold Reef City’s Lyric Theatre where, dressed like a broke pimp, he was roasted at a Comedy Central event so grimly lowbrow that it made him look like Nelson Mandela by comparison. He was surrounded by an assortment of comedians and D-grade celebretoids, and introduced by UK huckster Jimmy Carr.

“I tell you,” Jimmy told us, “when it comes to politics, this man has convictions. Mainly for fraud.”

Haw haw. Politics as entertainment as politics. But Kenny did it all for the children. He claims that he gave the money he earned from Comedy Central to a charity called Ratang-Bano, based in the Johannesburg township of Alexandra and run by a woman named Ingrid Maloi, who single-handedly takes care of 352 Aids-ravaged families. “Government is not helping her, business is not helping her”, Kenny tells me. “Besides, politics are too serious. Sometimes you just have to chill.”

We now live in a country where the likes of Kenny Kunene, known crook and model parvenu, sounds more viable as a political candidate than most legitimate political candidates. He comes off as warm and concerned and involved, and while that may just be another sales pitch among thousands, he certainly gets points for perceived sincerity. It would be nice to say that I leave the Hilton dismissing Kunene outright, but unfortunately that isn’t the case. Think of me as broken goods if you will, but while fleecing state coffers in his capacity as Minister of Porn or whatever, I truly believe that Kenny would actually spare a thought for the less fortunate.

He’s a Reality TV politician in a country that’s about to get voted off the island. We’ve got what we deserve.