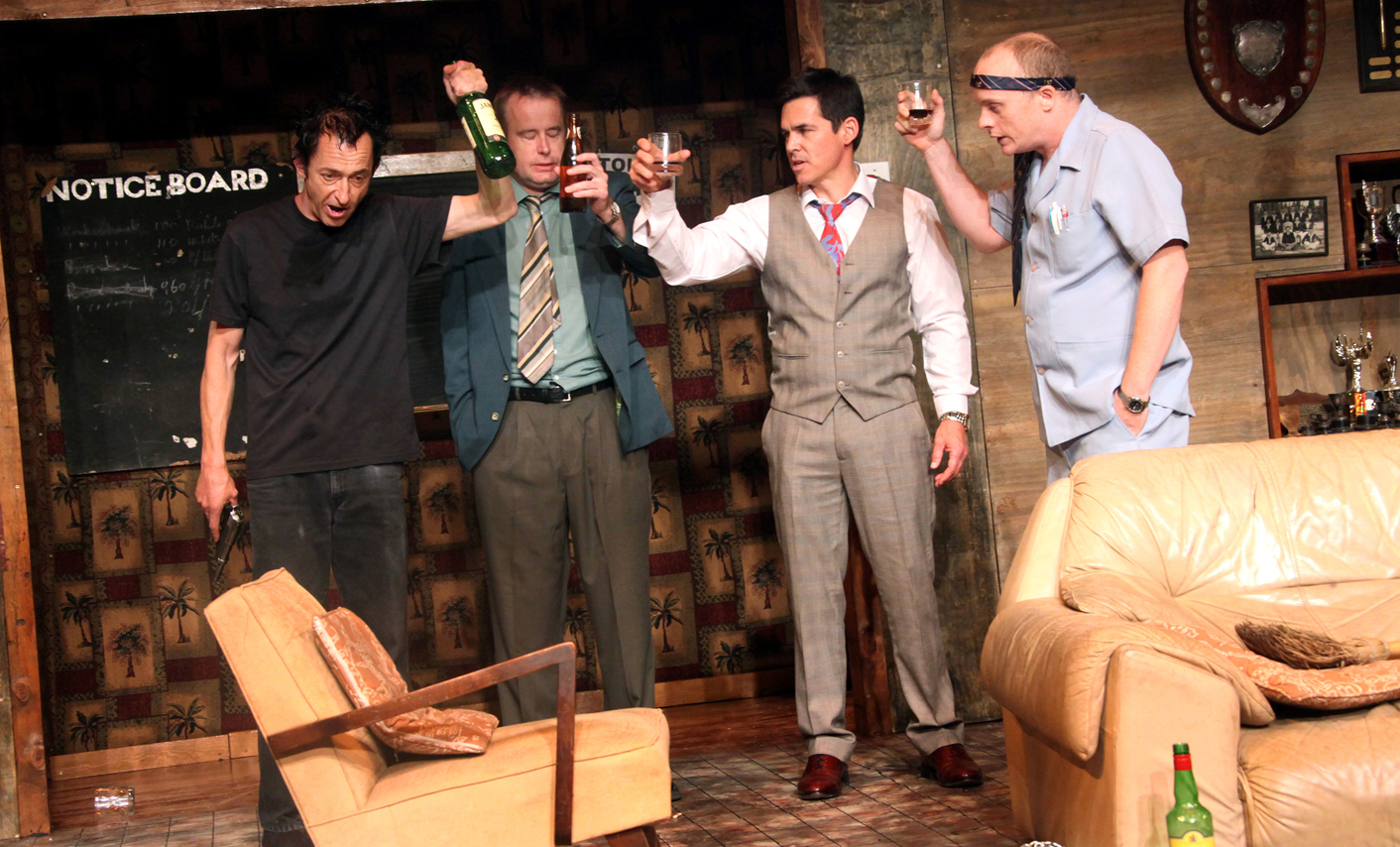 Paul Slabolepszy’s early-nineties play Pale Natives captures some of the anxieties of the era’s white males, but its delivery is a little disappointing – save for some superb acting by Lionel Newton. By LESLEY STONES.

The year 1994 must have been a scary time for white males of a certain age.

People of all colours and all ages were in for some remarkable changes, and the crackle in the air is made palpable by the cast of Pale Natives, a play from that era by Paul Slabolepszy.

The show is part comedy, part tragedy, and mostly sheer desolation as four mid-life crisis characters regroup for a friend’s stag party. It’s the stereotypical group compilation: the dense one, the smart, successful one, the wishy-washy one and the absolute asshole.

As they try to recapture the carefree days of youth, it’s obvious the years have not been kind to them, and they haven’t been kind to each other, either.

The music and scenery set the tone nicely, taking us back to the days of privilege, grotty pubs where ill-mannered men left their mark, good songs and bad suits. Happily there’s not too much ‘going to the dogs’ angst being expressed, because the play focuses more on the interpersonal relationships than the broader political sweep.

Slabolepszy fleshes out his characters well, but the script drags because they have so little of interest to say to each other. The laughs are sporadic, delivered in a few nice quips and some physical humour, but not enough to call it a comedy. A touch more humour and a faster pace would improve it enormously.

That lack of sizzle sees the first half creep along slowly, while in the second the comedy plays second fiddle to the drama. Now alcohol-fuelled sparks and resentments are unleashed and 25 years of pent-up frustration and feelings of failure unfurl.

What lifts the play a level higher is Lionel Newton, who stands out superbly as the obnoxious Kyle. Newton has a scary knack of casting a sneer that could scar you for life, or a hoity-toity quip that could leave you feeling one inch tall. He does all that and more, strutting like a fading rock star as he abrasively derides everyone and everything. He’s absolutely brilliant, though you hate his character for it.

Behind him, literally and figuratively, are James Cairns as the dense Eddie, Ashley Dowds as the wealthy CEO and Anthony Coleman as Roux.

Cairns does a great job as Eddie, managing to look as well as sound thick, yet in the pleasant position of being the happiest because he doesn’t have the vision to feel that life could have been better. Life has made him a rising damp repairman, and he’s happy with his lot. He tries to be one of the boys but isn’t, and Cairns captures that misfit-ness delightfully.

Coleman is either ineffective as Roux, or brilliant in the part of an ineffective man, so let’s assume the latter. Besides, the script doesn’t demand much of him, and when it does, he delivers it well.

Dowds stands his ground nicely as a bit of a know-it-all, nicely capturing the air of a man who appears successful but is riddled with regrets and unfulfilled dreams.

The set makes excellent use of the space, recreating a run-down pub with plenty of room for lounging around, strutting, clashing and carousing.

The play is obviously from a different era, but the political references don’t confine it to those days, since midlife crises and unfulfilled dreams remain a sad and eternal reality – no matter what your colour.

Pale Natives runs at The Market Theatre until 11 May. DM