Naidoo, Jim and Abedian at The Gathering: Time for an economic reboot? 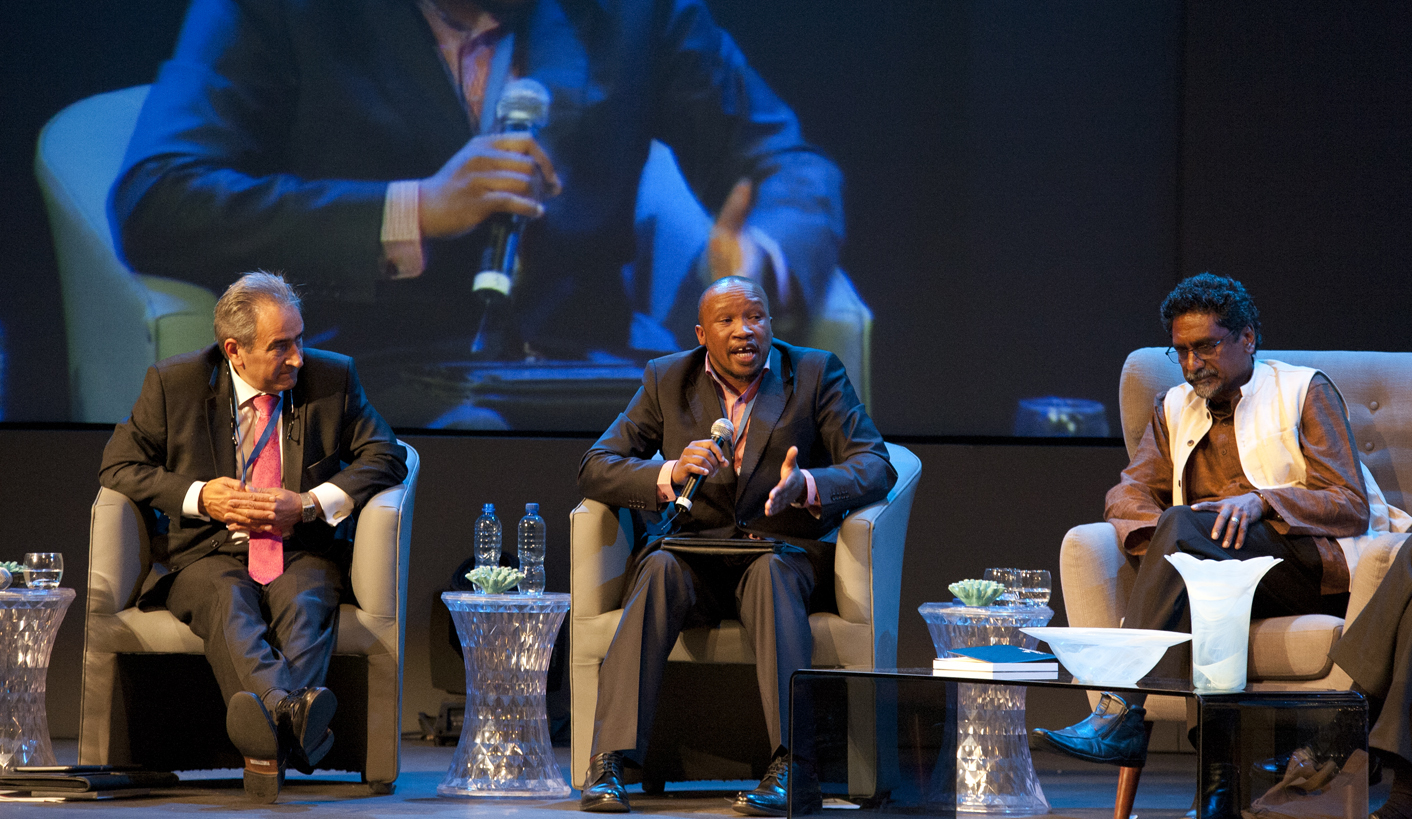 The Gathering hosted a discussion on the country’s political economy that proved the dismal science could be a passionate affair. J. BROOKS SPECTOR reports.

An economics discussion coming just after lunch and deep into the afternoon of a long day’s talkfest could easily have been a recipe for that gentle easing into a postprandial nap for many at this year’s Gathering. But, surprise, it wasn’t. Instead, it became a vigorous, even passionate exchange on the current – and dangerous – state of South Africa’s political economy – and what needs to be done in order to fix it.

Firmly setting the cat among those metaphorical pigeons, Abedian crisply set out the pressing dilemmas of today’s South African economy. He began with the sobering fact that the country currently is only putting aside half the savings needed to meet the nation’s urgent infrastructure needs. Worse, the country has equally serious human capital backlogs. But beyond the kinds of backlogs one would find identified a standard economics textbook, Abedian took an unusually fervent stance on the country’s major social capital gap. While social capital is usually the kind of thing that is more the province of a nation’s moral philosophers than its economists, Abedian made the point social capital is the intangible but very real glue that holds a society together and binds it to an understanding and appreciation of a joint national commitment to a country’s overarching goals.

Irvin Jim was equally passionate once it was his turn to speak. Noting that this discussion on the country’s urgent economic questions is taking place at a highly politicised time in the country’s history, his presentation became an extended riff on the arguments he has been making for several years now to his audiences across the country.

Jim argued in effect – just as he has in so many other recent speeches – that the country’s “political leadership has aligned itself with the global looters. Our political leadership is no longer able to represent the nation because it has [its own] conflicts of interest.” Jim noted that the country faces a triple whammy of a crisis, mixing poverty, inequality and unemployment, despite the country’s abundant natural resources, and that, moreover, these crises have been getting worse, rather than better, over the past twenty years of non-racial democratic rule.

As expected, a key element of Jim’s preferred solution for coping with these critical shortfalls in national equity and fairness is a solid dose of nationalisation. This would harness the nation’s resources to improve the distribution of the country’s wealth – and, crucially – would harness the stored wealth of the mining sector (among other productive sectors) now being banked unproductively rather than being invested for the good of the majority. Along the way, Jim also severely chastised the current manner of BEE projects, saying the country has paid a real price for these arrangements. As Jim argued, BEE has led to the enrichment of a few in the form of their rising share prices and profits, even as these arrangements had not been structured to generate employment for the poor – or those without any work at all.

Jim argued passionately – there’s that definitely un-economics-speak word yet again – for a renewed effort to rationalise the commanding heights of the South African economy to put business surpluses to productive work finally for the benefit of all. (Interestingly, once he got into his remarks, Irvin Jim’s avowedly left agenda drew surprisingly loud cheers from an audience that might easily be called anything but a revolutionary gathering.)

As the final speaker, Jay Naidoo was equally fired up, laying into the current government for letting things slide so seriously. In addition, Naidoo charged civil society – and the country’s population as a whole – to once again take up its own responsibilities to chivvy government back into serving, rather than ruling.

Naidoo – building on a point Abedian had touched on in speaking of human capital deficits – argued that the government had sadly shirked from its absolutely essential responsibility to ensure that its schools are properly equipped. In exasperation, Naidoo noted that the country only has about 27,000 schools – how hard can it be to build toilets, or a properly equipped science lab for that matter, in every school in the country, he asked rhetorically.

Getting further into his education critique, Naidoo added that the education department and its teachers must do the job they are being paid to do – or else. Staff must not steal, teachers must not engage in predatory sexual practices upon their students, and that if the country needs more competent and energetic maths and science teachers (which it does), it must import them for other countries to make up the deficit in staff. And for good measure, the country’s principals should not be part of teachers’ unions. They are management, not worker bees, and their job one is to manage their schools properly.

All of this matters a great deal, Naidoo argued, because the country now has the task to prepare its students and future workers for a world where the very nature of work is changing, even as the country’s educational system largely is preparing its students for the past rather than the future. Education now needs to guide and educate students to create their own careers and work, rather than simply shuffle forward to become cogs in the economic machine. Naidoo didn’t quite use that metaphor, but that was what he meant.

Starting in on his observations of civic society, he wondered what had happened to all the small businesses that had been nurtured by the early black small business federation, FABCOS, back in the 1990s. If things had gone right by now, those many thousands of small enterprises would by now have expanded into middle-sized businesses, and they, in turn, would have hired thousands more young entrants into the labour force who would have created viable livelihoods for themselves. But, largely, it hasn’t happened, and the country is much the poorer for it.

Naidoo reminded his audience that Africa is projected to have a major boom in young, would-be workers in the coming years who will be ready to work and eager for new consumer goods. This demographic bulge can trigger a major corresponding boom in the continent’s overall economic circumstances – but only if all these young people can gain a real foothold in the economy.

Turning finally to the nature of civic participation, Naidoo argued that power over government services, allied with technology’s newest communication tools, can give a lift to civic groups and concerned citizens to help them take real responsibility for managing and guiding institutions at the local level – if the structures are designed properly. And in addressing the way the people’s civil servants and their elected representatives comport themselves in the public space, he insisted that in the future, to ensure these people must commit to using the country’s public schools and hospitals as a condition of their employment. If this is done, it would lead to a revival in the fortunes and the quality of these critically important but now-decaying public assets. Rounding out his proposals for the reform of the public space, Naidoo advocating public financing of elections; that businesses must be barred from funding the electoral campaigns of office seekers and political parties to return politics to the people and away from special interests.

As the session turned to questions from the audience or from the panel of interlocutors, Jim responded forcefully, for example, to the charge that he had conflated the interests of NUMSA’s workers – effectively the country’s middle class – with those of the nation’s truly poor or unemployed. In response, Jim argued that the two groups certainly did not have antithetical goals. Many union members still received very low-level wages and so a common fight extended to the still-un-won battle for a basic minimum wage, as well as the goals of the Freedom Charter.

By the time the session wrapped up, it was pretty clear all three men were strongly in favour of measures – even if there was not total agreement on specifics – that would encourage greater economic growth, crack down hard on corruption and the waste of economic resources, push for fuller equity in the economy, put in place urgent measures to create new employment, and carry out efforts to achieve greater state capacity in the economic sphere. Right at the end of the session, Iraj Abedian summarised his position as pointing to an urgent need to click the control-alt-delete keys on a computer simultaneously so as to reboot a malfunctioning system. Not to be outdone, Irvin Jim shook his head and said, emphatically, that there was a more fundamental need. The real need was to replace the operating system entirely.

“We have always known what needed to be done. For instance, we said government can create jobs by doing a couple of things: by increasing tariffs through bringing back capital controls, and by stopping money from leaving the country through capital flight. We have continued to remove exchange controls almost every year, and money is leaving the country.

“We have always said the government should implement fully the freedom charter. From where we are sitting, it is suicidal to allow the continuation of the special type of colonisation we have in South Africa where the coloniser is inside the country. Basically you have white monopoly capital, corporate multinationals and the white population who dominate the South African economy. The freedom charter in this case is very clear. It says mineral wealth, the soil, banks and monopoly industries must be transferred to the ownership of the people as a whole. That is the cornerstone for non-racialism and non-sexism. To leave the existing economic conditions intact is basically to allow racial supremacy to continue.” DM