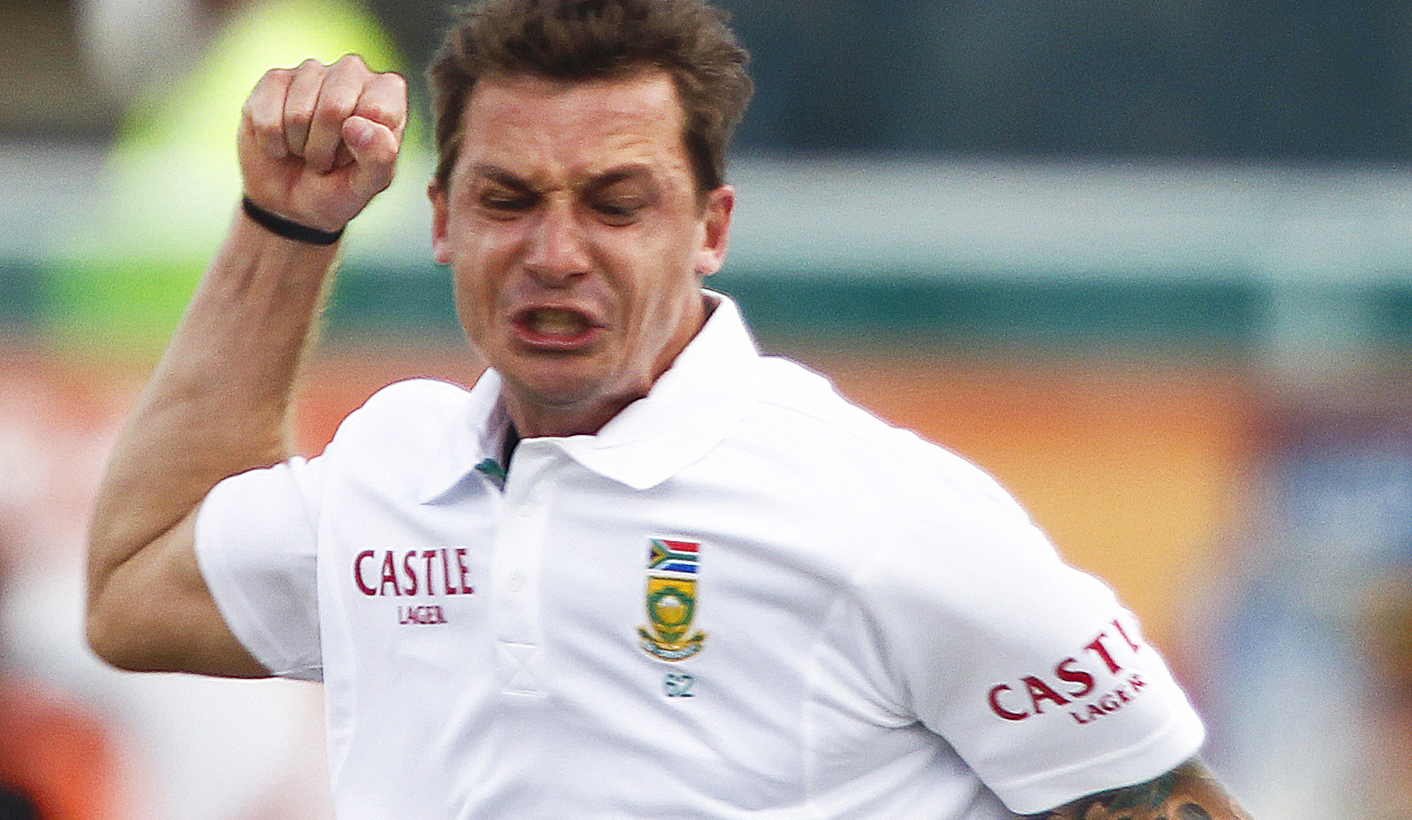 Dale Steyn has lapped up yet another cricketing plaudit after being named Wisden’s Cricketer of the Year for 2013. Not bad for a small town boy who preferred skateboarding to fast bowling in his early years. By ANTOINETTE MULLER.

“When I fly from Johannesburg to Cape Town and look down at my country, it’s amazing to think, ‘Out of all the people to bowl fast for South Africa, they picked me.’ People might say you’re destined for great things. But when you’re in a small town, what are the chances?”

What are the chances, indeed, that a skateboarding, guitar-loving kid from a town with fewer than 13,000 people would one day become the best fast bowler in the world? What are the chances that a smart-talking kid whose parents had little interest in cricket would go on to lap up Wisden Awards?

Not great, you’d agree. But when it happens, you’re one in a billion, and the plaudits will keep on coming like they do for Dale Steyn.

South Africa’s leading pace man lapped up another award when he was named Wisden’s Leading Cricketer of 2013, becoming only the second South African after Jacques Kallis to earn the honour. His performances in 2013 were outstanding, with 51 Tests scalps in nine games at an average of 17. He was equally effective in one-day internationals, with 27 wickets in 16 games, and was also named Daily Maverick’s Cricketer of the Year.

“Most remarkable, perhaps, for a man of his pace, was his meanness: an economy-rate of 3.65 was comfortably the lowest among bowlers to have sent down 100 one-day international overs in 2013. Fast, penetrative and parsimonious – it was some combination. He shows no signs of slowing down or losing his enthusiasm,” said the Wisden assessment.

For Steyn himself, the visceral thrill of taking wickets is something which keeps him going.

“I enjoy taking wickets more than most people can understand,” he told Wisden. “I’m addicted to that feeling. I live in the moment, but I hope there are many more years of it to come.”

Those wickets have come in many shapes and forms, but it’s his determination and his willingness to never give up that sets him apart. The Wisden article that goes along with his award says the man himself picks the win over India during last year’s Boxing Day Test as his favourite moment. Yes, that same Test which had some pulling their noses up thinking: he might be on the way out.

Earlier in the year, took six for eight against Pakistan at the Wanderers, but that was easy compared to the bare-knuckled challenge India dished up. Remarkably, that Boxing Test came after one of the worst spells – statistically anyway – of his career.

He went 416 balls without a wicket after a brutal first Test against India at the Wanderers in late December, the longest dry spell of his career. From dismissing Shikhar Dhawan early in the first Test to getting rid of Che Pujara in the second, Steyn went without success. In between it all he had always been told that one of this longest allies, Jacques Kallis, would be playing his last Test in Durban.

With that bombshell dropped and a Test series to win, Steyn found renewed focus and intensity just a few hours after he told Kallis: “Jacques, I won’t let you down. I will run through brick walls for you, I promise.”

India had made a solid start in Durban, and the lifeless pitch saw the visitors gallop to 198-1. Then a Steyn spark changed things. A combination of three wickets, ten balls and no runs was all it took for Steyn to return to the vein-popping, invisible chain-saw wielding beast the world had come to love. When he is at full tilt, he’s perpetual motion, an image that won’t focus – and a blur is all you see. South Africa ended up winning by 10 wickets and claiming the series 1-0, to extend their run as the world’s number one ranked team.

Steyn sailed to 350 Test wickets in that Test in Durban, the joint-second fastest with Sir Richard Hadlee and just three Tests behind Muttiah Muralitharan. His Test average of 23.01 is almost unheard of in this day and age of batsman-friendly pitches. Only two other bowlers still playing can better it – Vernon Philander with 20.11, and Ryan Harris with 22.56. Of those players still playing, nobody has a better strike-rate than Dale Steyn: 42.1. Of the men preceding him, three played cricket over a century ago – Sydney Barnes, Geroge Lohmann and John Ferris. Only Shane Bond – with an overall strike rate of 38.7 – played cricket in recent years. Steyn is a fast bowling machine.

The very fabric of his existence now resembles fast bowling. He is the perfect athlete. Not an ounce of fat on his body, despite his penchant for late-night trips to fast food joints. He has the perfect bowling action, meerkat-like in its upright stride, with head as still as a statue. Steyn is only 30 now, and although some niggling injuries are starting to become far more frequent than in his early days, he almost certainly has another three years left in the tank.

South African cricketers, even the greats, are often not as revered as they should be on home soil. Steyn has been different. Even when he was booed at the Wanderers for South Africa’s decision to opt for defence instead of attack in their quest for a record-breaking 458, Steyn came back in the next Test and did what he does best: bowl like a demon. And, just like that, the adulation for cricket’s rock star returned.

In full swing, Steyn is much like the music he loves: loud, fast and, for some, difficult to understand. But genius often can’t be understood, just appreciated. And South Africans must be so very appreciative that he is theirs. DM