Cosatu’s moment of Zen: Let’s all be friends… until after the elections 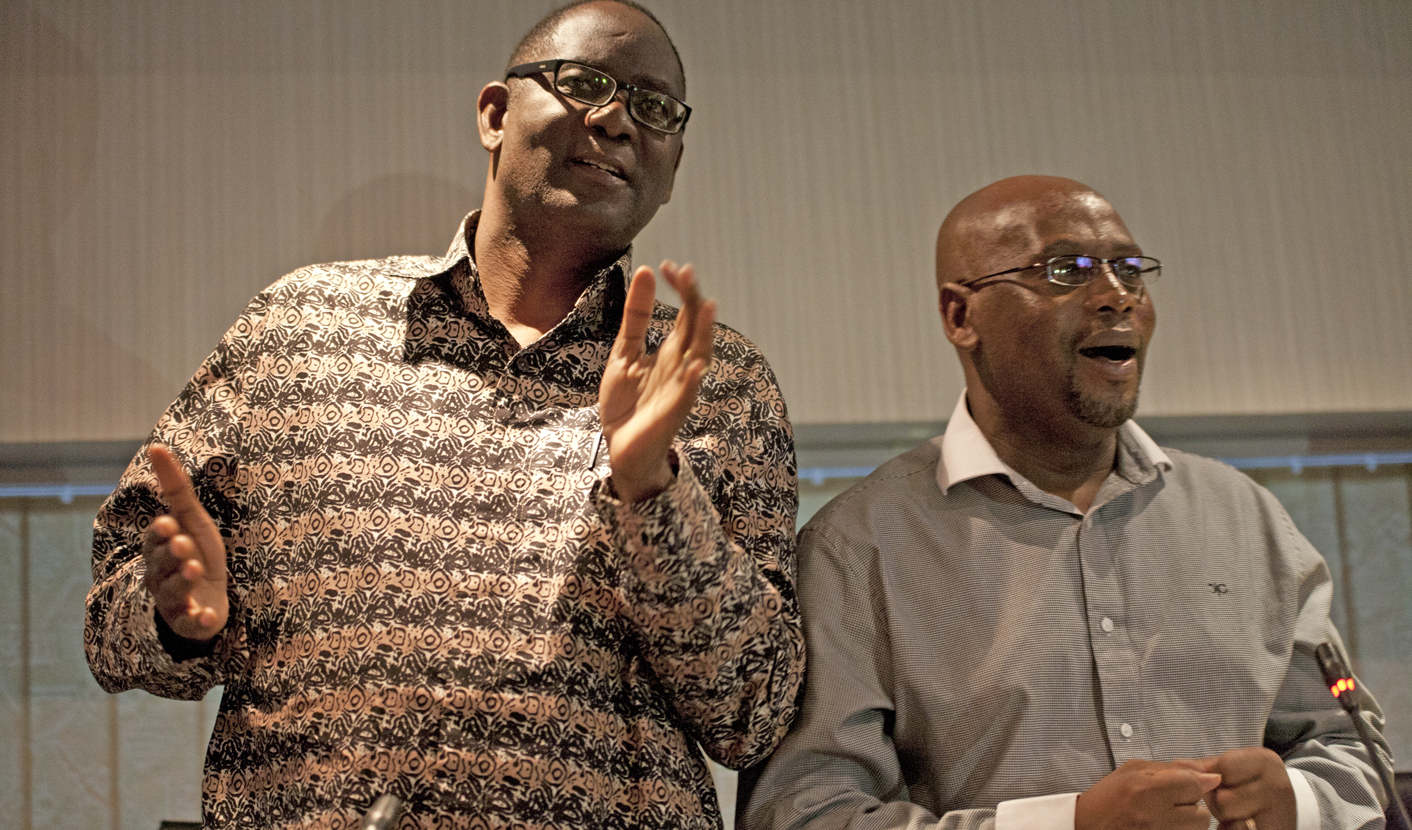 War? What war? Despite predictions Cosatu's special central executive committee (CEC) meeting would descend into chaos on Tuesday, the ANC managed to pacify the federation of trade union's deep divisions until after the elections. It's a saving grace for the party, but for the country's largest labour federation, which will brief media on the meeting today, the war has only been postponed. By GREG NICOLSON.

“Why should we jump to mentioning anything when Cosatu has not had a press briefing?” asked ANC spokesperson Jackson Mthembu on Tuesday evening, adding he had not heard about the outcome at the CEC. He wasn’t going to comment on Cosatu’s decision to postpone making a decision on what to do with General Secretary Zwelinzima Vavi and the National Union of Metalworkers SA (Numsa), which was reached after Tuesday’s CEC meeting, according to SABC and ANN7. But that doesn’t mean the ANC didn’t have a key role to play.

On Tuesday night Cosatu was yet to elaborate on what happened in its meeting, but an anonymous source as well as ANN7, The New Age and SABC reporters waiting outside the venue as the meeting closed all reported that the issues had been postponed. Cosatu will send a press release on Wednesday and is expected to hold a press briefing, but if the meeting is postponed it effectively means no decisions will be taken on the controversial issues until after the 7 May elections.

Photo: Numsa General Irvin Jim behind a unionist in an ANC jacket at the Cosatu CEC meeting. (Greg Nicolson/Daily Maverick)

The federation of trade unions went into the meeting divided. The decision to call a special meeting was about factionalism: what should be done after Vavi’s suspension was overturned by the South Gauteng High Court and should Numsa be suspended, or even expelled, for challenging Cosatu and withdrawing support from the ANC?

The issues aren’t new. Vavi’s been a thorn in the side of the pro-Zuma section of Cosatu since before the ANC’s Mangaung conference. In December 2013, Numsa decided to withdraw support to the ANC in this year’s elections and investigate the option of starting a political party. Its comments on Cosatu leaders and government have been scathing, to say the least. The divisions have been festering so long they’re now almost irreparably deep.

Tuesday’s meeting could have been the climax of a long battle. There’s one month to elections and Vavi’s back. Numsa had been teetering on the brink of expulsion, held back only by obfuscation wrapped in a cumbersome federation process. Numsa and the South African Democratic Teachers Union (Sadtu) literally fought at a Durban hotel on the weekend and some thought this meeting could go the same way.

But there are two things that likely led to a ceasefire. Firstly, since returning to work on Monday, Vavi has been talking peace. Outside Cosatu House on Monday, his first day back at work, he said “haters” should be careful of dividing the federation “our forefathers” put together. Secondly, the elections forced the ANC to intervene.

Re-suspension of Vavi and expulsion of Numsa could have had dire consequences. Hundreds of Numsa supporters gathered outside Cosatu House on Tuesday protesting against any possible action against the union. Numsa argued it had a right to be an autonomous member of the federation, was not bound to supporting the ANC, and could cry foul if it wanted to.

“The only beneficiaries of this split will be the bosses. To us Cosatu was not an end in itself. It was an instrument of struggle. It is for this reason that we understood Cosatu as one stop towards one country one federation. Our call for a revolutionary, militant and independent union movement and against a ‘yellow federation’ is about safeguarding the capacity of workers and the working class more broadly to act in its own interests,” said Numsa’s press release on Tuesday. If it is mobilising against Cosatu and government while it’s still a part of the federation, imagine what it could do if expelled.

Enter the ANC. Deputy President Cyril Ramaphosa and Deputy Secretary General Jessie Duarte were seen walking into Cosatu House on Tuesday to address the CEC meeting. The party has a clear interest in maintaining the unity of the federation and ensuring Cosatu’s largest affiliate, Numsa, doesn’t go it alone. “Don’t exchange Vavi for splitting the federation. Do anything and everything else, but splitting the federation that was built… is not worth the price of hitting someone. It does not work in real life,” ANC Secretary General Gwede Mantashe told a meeting of South African Transport and Workers Union (Satawu) shop stewards last year in Johannesburg. (Mantashe, like other critics, has also attacked the level of attention Vavi personally receives as a leader.)

With Cosatu postponing its tough decisions until after the elections, the ANC has won the day. It’s almost certain that a split would have harmed the party’s chances on 7 May. Numsa leaders would likely have tried to encourage other unions, or factions of them, to join the split and increased its criticism of Zuma’s government, which is already strong. Then there would have been an increase in fighting amongst the unions – hardly helpful for the ANC as the party is teaming up with Cosatu to campaign on May Day.

But the fight has only been delayed. Monday’s statement from the National Health and Allied Workers Union (Nehawu) shows how deep the divisions are. “The federation should do what it has to do – it must without any fear or favour – apply its own rules and policies, and if this means expelling those who want to remain within the federation whilst destroying some Cosatu unions and who see themselves as opponents of our alliance, then let it be. It must surgically remove them, root and branch to allow itself space to begin a process of rebuilding itself and affiliates,” said Nehawu on Monday.

The ANC has avoided an election disaster, but Cosatu’s war is still to be fought. The labour federation will provide an update on its meeting today. DM