The killing of Anni: Shrien Dewani, the country’s mos...

The killing of Anni: Shrien Dewani, the country’s most awaited murder suspect, now in South Africa 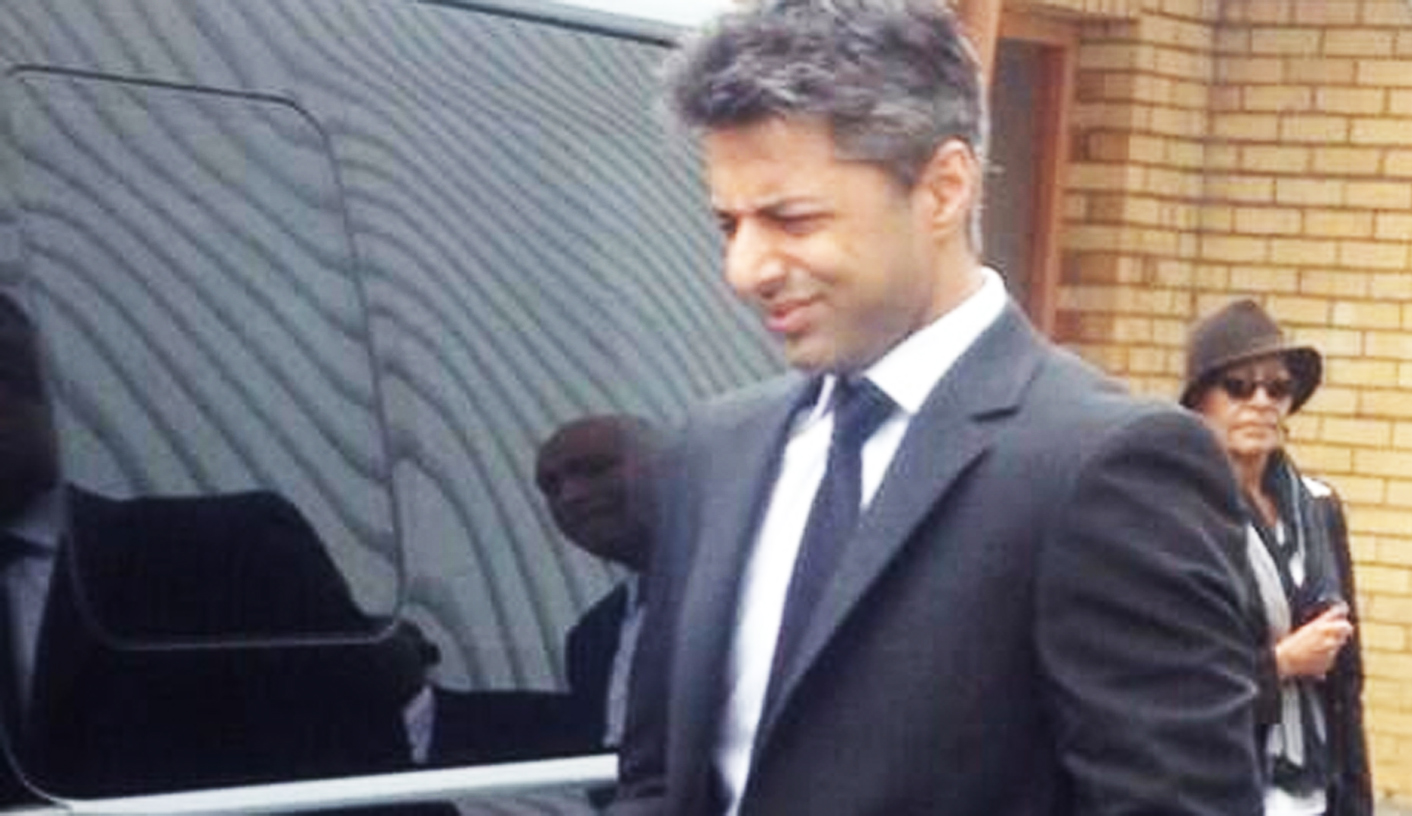 Clean shaven, much greyer than he was on his honeymoon and dressed in charcoal suit, the slightly-built Shrien Dewani twitched uncontrollably and flinched at the slightest sound or movement as he stood facing Judge John Hlope in the dock of the Cape High Court in Cape Town on Tuesday. It has taken three years but Dewani is finally here to face charges that he ordered the killing of his bride, Anni, in the city in November 2010. By MARIANNE THAMM.

Around 12.30, shortly before Shrien Dewani was due to walk up the gloomy stairwell to Court 1 from “die gat” (the hole) below, a uniformed orderly barked over the clamor in the packed courtroom that all cameras were to be immediately removed from the venue.

And officials were serious. There would be no breach of any undertakings made to British officials or Dewani’s family that the defendant, Shrien Dewani, would not have any of his rights violated.

Earlier, one unfortunate journalist who had secured a prime seat in court had accidentally removed his camera to show a colleague footage he had obtained earlier and was instantly ejected by two angry, uniformed policemen. In desperate times like these, one hack’s misfortune is another’s opportunity, and a determined foreign journalist immediately tried to wedge herself into the space he had just vacated – only to be shooed away by protective colleagues.

Such was the atmosphere inside and outside the Cape High Court as a veritable scrum of local and international press jostled and vied for the first picture of Shrien Dewani on South African soil as a murder accused.

The public gallery began filling up from 9am, among the curious onlookers a regular contingent of local tricoteuses (women who knitted while watching public executions during the French Revolution) whom some recognised from other famous Cape High Court murder trials, including those of Najwa Pietersen and Dina Rodrigues in 2009 and 2007. A small group of ANC Women’s League members, dressed in the league’s trademark black and green regalia, also sat among the spectators.

It was a spectacular, sunny autumnal day when Dewani, accompanied by a doctor, a nurse and police officials, touched down in Cape Town around 9am in a privately chartered jet from his hometown of Bristol.

Department of Justice officials confirmed that Dewani had been extradited to South Africa in the private jet rather than on a commercial airline because of his “peculiar mental condition” and fears that he might endanger himself or the public.

The costs of the flight will be borne by South African taxpayers.

Dewani was transported to the cordoned-off court buildings in downtown Cape Town in a black Hyundai passenger vehicle with tinted windows and was met outside by a large crowd, including curious onlookers and chanting ANC supporters.

The order just after noon for cameras to be removed from the court signalled that the man everyone had been waiting for and wanted to see in the flesh in South Africa was about to appear in public for the first time.

Dewani’s family, including his father Prakash, his mother Snila, his brother Preyen and his sister Preyer, accompanied by representatives of the British High Commission, quietly filed into the court and slipped into a bench in front of the dock.

Spectators were asked to “all rise” as Judge President of the Western Cape, John Hlope, swept in wearing his red judge’s robe. Hlope sat down and immediately addressed the court warning “this court is now in session and as long as I am sitting in this chair no one is allowed to take pictures”.

It must have been while Hlope spoke and glowered from the bench that Dewani was quietly ushered into the dock because when we turned to look back, suddenly, he was there – a slightly built man, somehow smaller than I expected. It was initially startling to see Dewani, whom most have only seen in photographs or TV footage, in the flesh. The 33-year-old businessman was visibly anxious and at first stood with his hands resting on the dock banging his thumbs together.

Dewani appeared to be straining to follow the proceedings and flinched at the slightest noise or movement in the court. His eyes darted back and forth in what appeared to be a nervous tic. Dewani also clutched his neck several times as if to assuage some sort of spasm.

Dewani will be charged with five counts: contravening section 18(2)(a) of the Riotous Assembly Act, kidnapping, robbery with aggravating circumstances, murder and obstructing the administration of justice. He was not asked to plead and the charges were not put to him.

A letter from Dewani’s psychiatrist was handed to the court as an exhibit and both teams agreed that Dewani would be remanded to Valkenberg Mental Hospital until 12 May when his trial would commence. He will be held in single room in a general ward at the hospital.

Dewani uttered only one word during the entire proceedings, an almost whispered “yes” when Judge Hlope asked if he understood what was going on.

Dewani’s appearance lasted less than fifteen minutes before he was led back down the stairs to be transported to the hospital, where he will spend a month under observation.

According to agreements between South Africa and Britain, authorities here have 18 months to put Dewani on trial or return him to the UK. DM