HANNIBAL ELECTOR: The Boerestaat party wants you to get naked 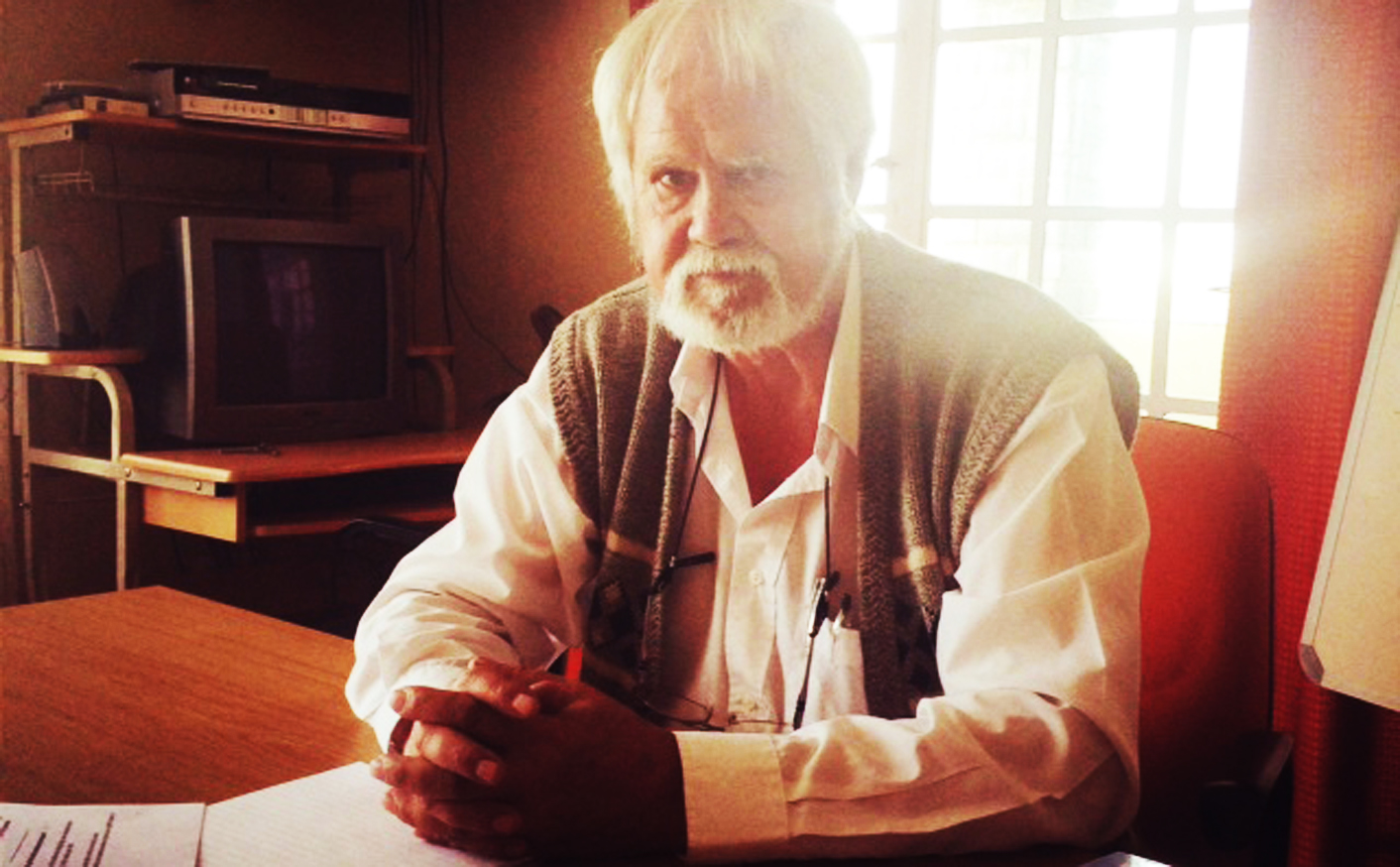 Coen Vermaak’s Boerestaat Party is firmly on the right wing, which has all but disappeared in South Africa. His story is the story of so many fringe parties—forgotten but still fighting, they use politics to tell their story. RICHARD POPLAK goes to Randfontein to investigate.

There, in a tangle of streets named for car brands—Fiat, Honda, Dodge—lies a chunk of South Africa’s discarded heart. A factory building undergoing a renovation and inside it, a large man in slacks and a knitted vest over a white shirt. His hair and beard and eyebrows are also white, as if bleached by some sudden calamity, while his skin is cardiac-arrest maroon. His name is Coen Vermaak and, among other things, he is the president of Boerestaat Party, which the literature describes as “the only right wing party registered with the Independent Electoral Commission”. Their electoral platform? “Our main aim is to increase our nation to at least 20 million by the end of the century.”

Coen Vermaak, in other words, wants the Boers to get it on.

The Boerestaat Party, located on the outskirts of the outskirts of Randfontein, GP, is one of 152 parties registered nationally with the IEC, most of which exist miles outside of the mainstream. The moment you leave the big tents belonging to the ANC, the DA, or the EFF, the proceedings become considerably more niche. Logos are hastily concocted from 1990s clipart, taglines are either surgically non-specific (A Party—We Have Plans. We Deliver), or completely unnecessary (Africa Muslim Party). In the alphabet soup of acronyms that constitute the underbelly of our democracy, citizens toil to promote causes that to most of us seem too local (Bohlokong Civic Association), too archaic (Black Consciousness Party) or too whacked out (Codors Consortium, run by Loopy Loop, located in Until Ever, Pretoria).

The bulk of these outsider parties are the work of one charismatic individual, an impresario crafting policy, gathering members, and promoting a Weltschmerz shaped and defined by this country’s strange, bloody history. Each tells a specific South African story through the medium of politics. That is certainly the case with Coen Vermaak, who in his spare time runs a successful civil construction business, and is a member in good standing of the Randfontein community. He employs 100 South Africans and hopes to employ many more. Business, he tells me, is “very, very good”.

So, what’s the problemo?

“As far as I’m concerned,” says Vermaak, once we’ve been served coffee in a boardroom above the factory floor, “we’re a dying breed. We’ve got a negative growth. It’s not about me, it’s about my nation. If I don’t do something, we will die out.”

Vermaak has written a mini library tabling his concerns, which he traces back to the foundation of the United Nation and their Malthusian distaste for population growth. The Boerestaat Party website lists five books and a slew of pamphlets under Vermaak’s name, with titles like Seks en politiek, Coitus Interruptus and Dagboek van die rewolusie. They have either a healthy or unhealthy focus on shagging, depending on how you look at these things, and Vermaak clearly has no patience for anything that would inhibit natural sexual congress between two full-blooded Afrikaners of the opposite gender.

“Orania?” he asks rhetorically, of the “breakaway” Afrikaner republic in the Northern Cape. “Last week they had a school sports day, and they had 300 children there, taking part. Tongue in cheek, I told them, ‘Oh, so you’re not against sex?’ You see, some time ago there was a man and a lady there, living together but not married. And they sent them away, kicked them out. That’s just crazy.” Extreme times, extreme measures: it doesn’t matter how, but Vermaak wants more Afrikaners to make more Afrikaners.

Coen Vermaak’s consciousness as a far right-winger took shape in his army days. He was born in Natal, grew up in Germiston, and spent ten years in the army, posted to the South West African (Namibian) border. One day, then-Foreign Minister Pik Botha arrived to give a speech in a big white tent set up for the occasion. Botha said that the government was not fighting the war on the border to win, but to win time in order to negotiate a dispensation.

“Lots of young guys died,” Vermaak tells me, “for their time.”

He distaste for the National Party deepened when he came to understand the full weight of the policies instituted under Hendrik Verwoerd during his mostly unloved tenure. “Ag, they boasted of seven percent growth between 1960 and 1970,” Vermaak says of the regime. “But think about why that may be.” As far as Vermaak is concerned, that uptick had everything to do with the Prime Minister forcing the contraceptive pill on Afrikaner women, so that blacks would be contained to the Bantustans and whites—including white women—would form the majority of the employed. That bump in GDP growth? All due to women entering the work force, paying taxes, buying clothes and jewellery and cars and ballpoints. The pill, insists Vermaak, has killed eight million potential Boer babies, a technocrat’s genocide of almost unimaginable proportions.

After the army, his outrage fully stirred, Vermaak started attending Afrikaner Weerstandsbeweging (AWB) meetings, led by the hard-charging, horse-riding firebrand Eugene Terreblanche. “I liked that very much,” he tells me. “I know that the media doesn’t like the right wing,” he continues. “They like to belittle them. They’re not conversant in English and that makes them look silly. But I think Eugene Terreblanche is one of the greatest people ever.”

“Oh yes, this is all a silent agreement of the government,” he says of the murders. “Now they make like they’re concerned. But they’re very glad. If our white women are wearing contraceptives they’re very glad. And that is what our party is for. To fight against this.”

When I mention that the theory of the mass murder of rural whites has been widely and resoundingly rubbished, and that whites are more likely to be killed by their spouses or drinking buddies than roving black gangs, Vermaak nods and shrugs and nods again. Then he pushes his spectacles up his nose.

“That’s why we need the death penalty re-instituted. Immediately. If we have the death penalty, Oscar thinks twice before shooting at Reeva. People must be brought to book. Since 2000, I’ve been collecting the names of all the whites that have been killed by blacks. Minorities have no protection whatsoever in this country. It’s true.”

But this, claims Vermaak, is all due to the economic disparities that exist in our denuded, strip-mined quarry of a nation. “We actually agree with Malema and his EFF. Of course, ja! We agree with him. You want to sell stuff in South Africa, you come open your factories here. Under the Nationalists and the ANC, they have raped this country, and sent all of our stuff overseas.” South Africa will become rich when we ring-fence the joint, electrify those fences, and start making things. “My business as an example; I cannot remember the last time a concrete factory was built in this country,” says Vermaak.

The fact that the Boerestaat Party is registered with the IEC should not fool the reader into thinking that Vermaak thinks much of democracy. His political philosophy leans more towards Plato than John Locke. As the party’s election manifesto explains:

The game is rigged in favour of the black majority.

It is as a rugby game, where one side has 15 players and the other side has 100 players.

Then are we surprised if the 100 players win?

Such stupidity can have only one result.

A vagrant and a doctor can’t have the same voting rights.

In our country even jailbirds can vote and their vote counts the same as the farmer that supplies all our food on our table.

Our standpoint is clear: Qualified Franchise where every man has one vote but everybody that has Diplomas, Degrees or [is an] Employer must have a higher value to their vote.

The Boerestaat Party now has 500 paid-up members, and has hired a marketing manager to buff the brand and grow the rolls. When I ask for his predictions, Vermaak says, “Ja, we’ll get a lot of votes, because we’re the only right-wing party.” But he doesn’t really want those votes, because he doesn’t believe in the process. Boerestaat, like so many fringe parties in so many democracies, uses the process in order to undermine and ultimately eliminate the process. “Under the present system,” he chuckles, “blacks would have to vote for Boerestaat.”

Which does seem unlikely.

And so we leave it at that, with Vermaak walking me out through the clanging factory, which is making tangible things just as he hopes Boers will start making people on a great production line of penises and vaginas and fallopian tubes. He has three sons. They bore six grandchildren. “We are barely replacing ourselves. We will disappear,” he says.

And maybe that’s the point of the democratic machine Vermaak does not respect—it stems, even for one brief voting cycle, the erasure of those on the edge. The pill killed Vermaak’s absent Boers. Maybe politics will save them.

As I drive off he disappears into the dust and din of his factory, pointing, nodding, producing. DM