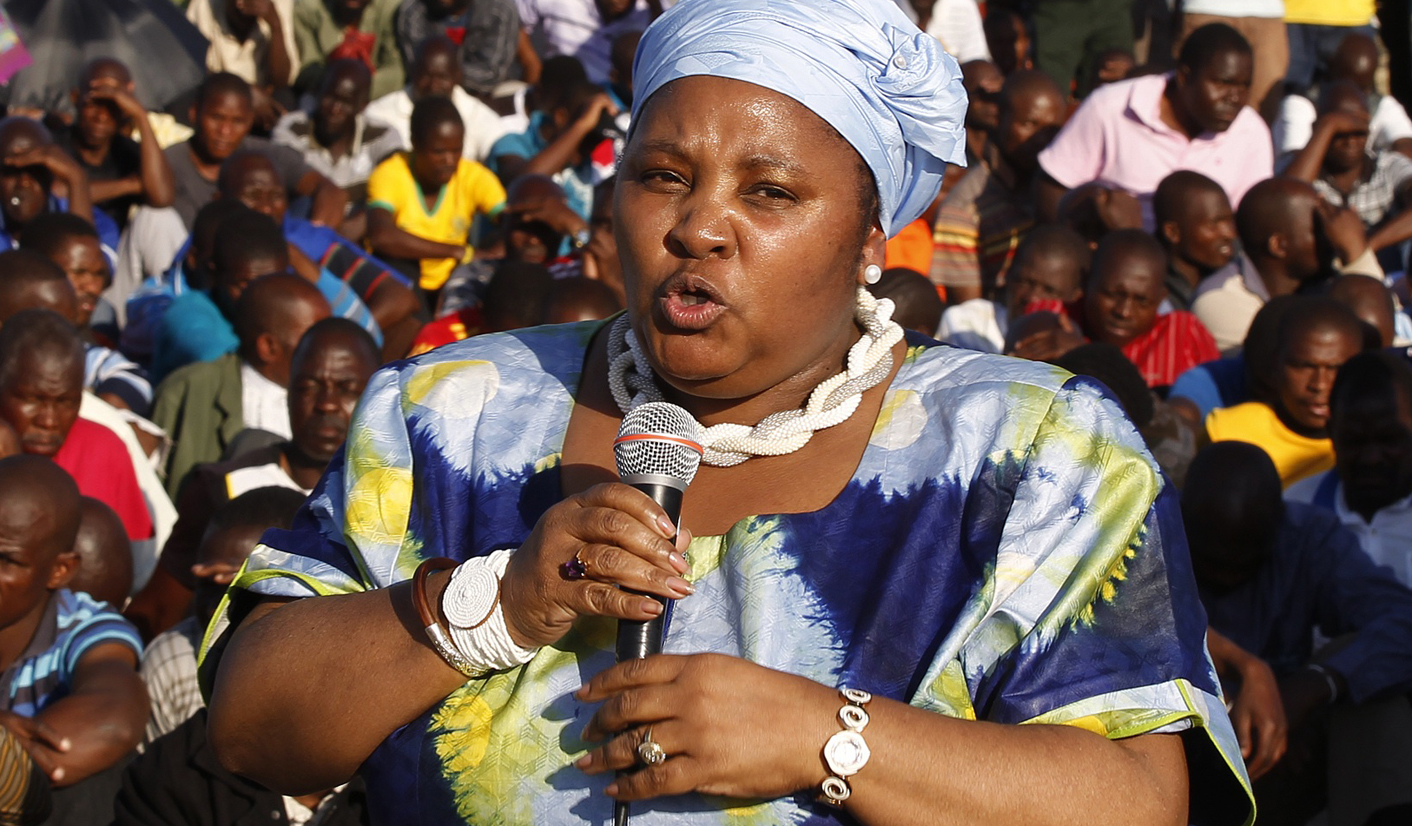 With elections round the corner, it seems our politicians have no shortage of good news stories to tell. Defence minister Nosiviwe Mapisa-Nqakula was the latest to put the positive spin machine to the test, this time on the subject of South Africa’s peacekeeping adventures on the African continent. Turns out we do a lot of peacekeeping – and it’s all good, all of the time. She may have forgotten to mention one or two inconvenient truths, however. By SIMON ALLISON.

There is an uneasy tension at the heart of the South African government over exactly who is responsible for sending our troops overseas; and who should take the credit, and the blame, for their exploits.

It was telling that international relations minister Maite Nkoana-Mashabane did not comment at all on South Africa’s peacekeeping operations in her review of South African foreign policy presented earlier this month. Perhaps she wanted to distance her department from operations that are not always thought through entirely; or perhaps an under-fire department of defence pulled rank, demanding to take whatever plaudits South African troops have earned abroad for themselves.

Either way, it was left to defence minister Nosiviwe Mapisa-Nqakula, at a speech in Cape Town on Monday, to take journalists through South Africa’s peacekeeping operations – the good, the bad, and the ugly. Except Mapisa-Nqakula and her speechwriters ignored the last two categories in favour of relentlessly positive spin: over the past 20 years, our troops have done nothing but bring peace, security and democracy to that dark, unfriendly continent to our north.

“Our commitment to the renewal of the African continent, and to the promotion of peace and stability which will lead to sustainable development in Africa is based on the understanding that our national interest is inextricably linked to what happens in our sub-region, SADC, and the continent of Africa in general,” said the minister. Lofty goals indeed, best achieved, apparently, by dispatching the South African National Defence Force to a dizzying array of African conflict and post-conflict zones.

It’s worth running through them, just to get an idea of the sheer breadth of South Africa’s commitments: Operations Mistral, Sunray and Teutonic in the Democratic Republic of Congo; Operation Espresso on the Eritrea-Ethiopia border; Operation Fibre in Burundi; Operation Triton in the Comoros (five times); Operation Montego in Liberia; Operation Cordite in Darfur; Operation Pristine in Cote D’Ivoire; Operation Vimbizela in the Central African Republic; Operation Bongane in Uganda; Operation Rachel in Mozambique; and Operation Manguzi in Angola, Lesotho and Namibia.

Of course, not all of these are major expeditions. Operation Bongane, for example, comprised just two staff officers who were despatched to observe a ceasefire agreement signed between the Ugandan government and Joseph Kony’s Lord’s Resistance Army; while Operation Montego was just three officers, working in support of the UN Mission in Liberia.

Others are a little more impressive in both longevity and scope. Take the DRC – South African troops have been on the ground in that country, under ever-changing mandates, for 15 years. “We have brought hope to the people of the Democratic Republic of Congo,” said Mapisa-Nqakula. “It is worth noting that when we deployed in the DRC, that country had virtually no infrastructure to talk about. Specialist elements were sent in such as fire fighters, engineers, and air cargo handlers, the military police as well medical teams who were able to stabilise the situation. That country’s airport in Kinshasa is now one of the busiest in Africa, all because of selfless efforts by our men and women in uniform.”

Currently, SANDF has deployed three military observers, 25 staff officers and a contingent of 1,345 troops in support of the UN mission. The troop contingent includes South Africa’s contribution to the Force Intervention Brigade, an experimental peacekeeping force that is allowed to go on the offensive against designated rebel movements (as opposed to acting only in the event of a clear and present threat to themselves of civilians). So far, the experiment has been successful; the rebel M23 movement in eastern DRC is largely finished as a military force.

South Africa’s other major military investment is in Sudan, where 805 soldiers have been deployed to support the United Nations-African Union Mission in Darfur (UNAMID) – again, SANDF has had some presence in the country for a good ten years and counting. Although the minister talked up the mission’s accomplishments – it “made an immense contribution” to the peaceful cessation of South Sudan, we were told – the minister did at least have the good grace to acknowledge that it has not been an unmitigated success. “South Africa maintains its presence in Sudan despite the successful cessation because the security situation in Darfur is yet to be stabilised,” she said; a damning indictment given that this is UNAMID’s core mandate.

This, however, was about as close as the minister came to critical self-reflection. “South Africans should continue to show support for our men and women in uniform as they continue to display selfless and loyal determination in executing the various tasks in service of this great nation,” she concluded.

Mapisa-Nqakula did not ask, or broach, any of the really hard questions facing SANDF at the moment. A year on from their deaths, it is still unclear why 13 South African troops were killed in action in the Central African Republic, when even our Parliament was unclear on what they were doing there. This was perhaps the most significant military defeat of the democratic era, and yet the minister ignored the topic completely, failing even to honour the fallen soldiers. In response to questions, however, she did unequivocally state that South Africa would not be sending any more troops to that crisis-stricken country: “Taking from South Africa a few soldiers and sending them to the Central African Republic and maybe getting more from other countries will not resolve the problem if there is no proper command and control or if there is no proper co-ordination of the few that you have currently on the ground. You can have thousands of forces and they can be as disorganised and will not serve the purpose you want them for,” she said.

The minister also failed to address the contents of the damning 2014 South African Defence Review, the contents of which was leaked last week. The review, reportedly approved by Cabinet, found that the SANDF is in a “critical state of decline” – under-funded, poorly-equipped, and with no clear strategic direction. “Even with an immediate intervention, it could take at least five years to arrest the decline and another five years to develop a limited and sustainable defence capability,” the review said. DM