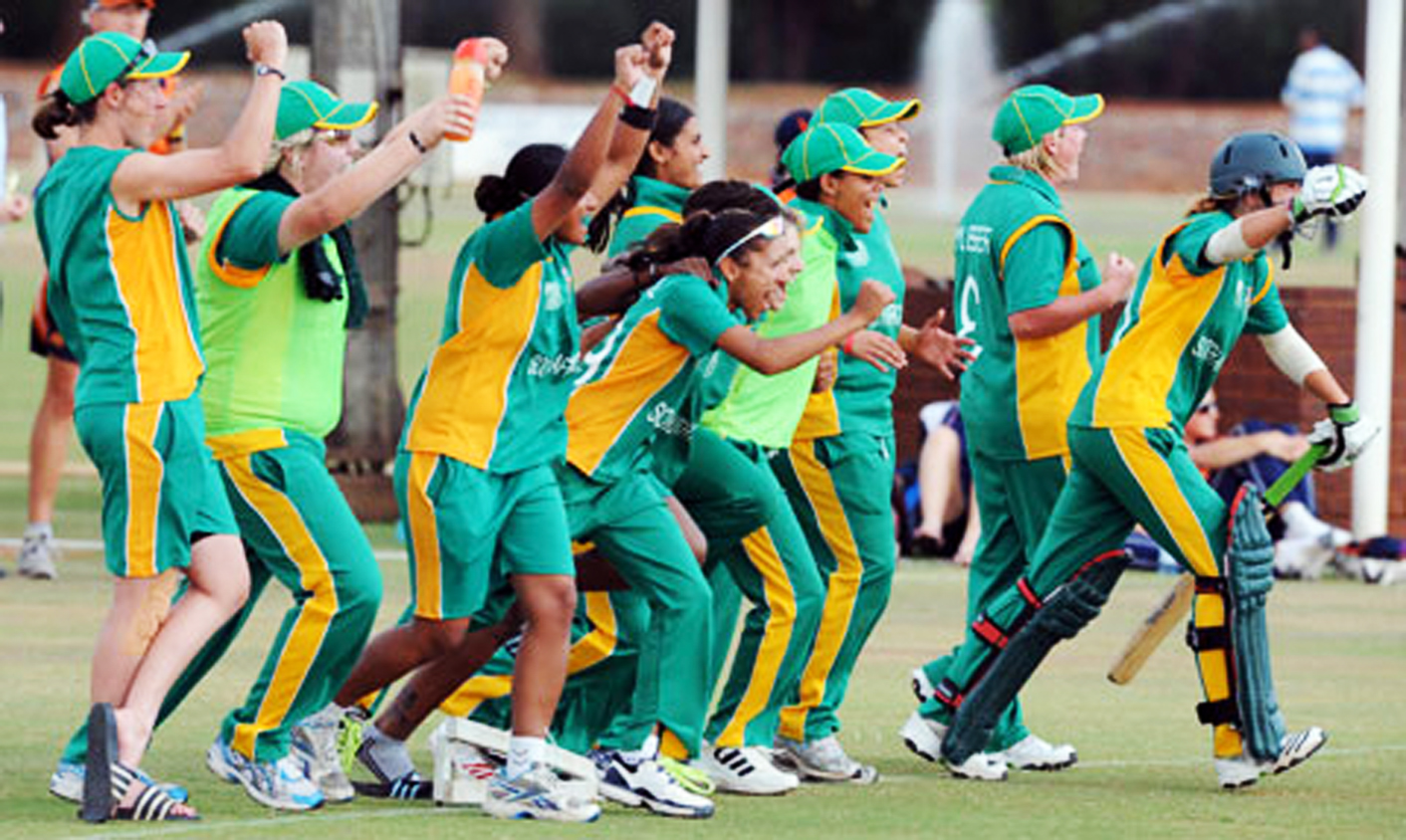 South Africa has done the double at the ICC World T20, with the women’s team also booking their spot in the semi-finals after beating New Zealand. It’s a remarkable achievement for a group of girls who, a year ago, were still having to find jobs while playing cricket – something some of them still do. By ANTOINETTE MULLER.

You’ll be forgiven for not knowing this, but while the men’s World T20 was on the go, offering up more embarrassments for England and a spin master class from Sri Lanka, the women have been playing too. On Monday, the South African women took on New Zealand and beat them by five wickets to seal their place in the semi-final.

South Africa’s ladies successfully chased 115, with skipper Mignon du Preez playing a captains knock of 51 off 47 to steer her side home. They will now play England in the semi-finals – which will be broadcast and played alongside the men’s semi-final. It was a fantastic win for the ladies, not so much because of the result, but because the South African women’s team is still very much behind in their professional development.

A year ago the women’s team was far from being on par with the rewards the men reap. Cricket South Africa had managed to sort out a sponsor – Momentum – but they were yet to award women contracts. That meant that the women who represented their country had to work while still trying to play sport at elite level – a sport that requires a significant amount of training. That has since changed. Six of the squad now have contracts and although those contracts aren’t quite on the same level as the men’s game just yet, it’s a start.

Part of the contract involves the players giving time back through various coaching jobs, something men do not have to do. What the contract does do, though, is free up some more time for training, and their efforts are clearly starting to show. Ahead of the team’s departure to Bangladesh, Du Preez told the Daily Maverick that the contracts would be available to the whole team in the near future.

“Cricket is played with eleven on the field and not just six, so we need to get everyone on the same level. It’s nice that it’s quite flexible. Part of the contract involves us giving hours back through coaching and we do also have to do quite a bit of training on our own, but it’s a good start,” she said.

It is a sign of the times that, whenever women’s cricket is discussed, there is more focus on its development than there is on the talent or their actual performance. That sportswomen still have to juggle day jobs alongside their sporting jobs is a great shame, and that very little emphasis is placed on their development and progress is even sadder. How irksome it must be that, even if somebody has achieved something spectacular, they are more likely to be asked about the challenges they face rather than what they have achieved.

South Africa isn’t the only country lagging behind, either. In 2011, most of the Sri Lankan women’s cricket team found jobs in the armed services. After continuous failed attempts from Sri Lankan Cricket to find a sponsor, the ladies found jobs in the navy, army and the air force. The jobs allowed them to play for the respective teams within the armed forces, but they were not required to take part in combat or even clerical duties. It wasn’t the ideal solution, but it allowed the women the freedom to train and try to better their game. They had a mixed bag of results because without proper coaching, no sportsperson will progress.

There is, of course, an argument to be made for the lack of funding, and that’s simply that women’s cricket doesn’t make money yet. The mass interest simply isn’t on the same level as the men’s game, if the interest is even there at all. However, the only way the game will grow is through exposure, and that is severely lacking on all fronts.

In South Africa, Du Preez believes many girls and women simply aren’t aware that women can play cricket or that there are clubs available for them to join. She also feels that there is a misconception that it is only “butch” girls or women who opt to play cricket. Along with her troops, she hopes to break that stigma and encourage more women to take up the game in South Africa.

In the lead-up to the tournament, the South African women’s team trained with Vincent Barnes – the former South African bowling coach. Having a professional with superb technical knowledge helped them enhance their game. Barnes has now been flown into Dhaka for a quiet word once again. England in the semi-finals will be one of the toughest games they have ever played, but no matter the result, their progress has been nothing short of outstanding under the circumstances. DM