The great Indian election: It's about jobs 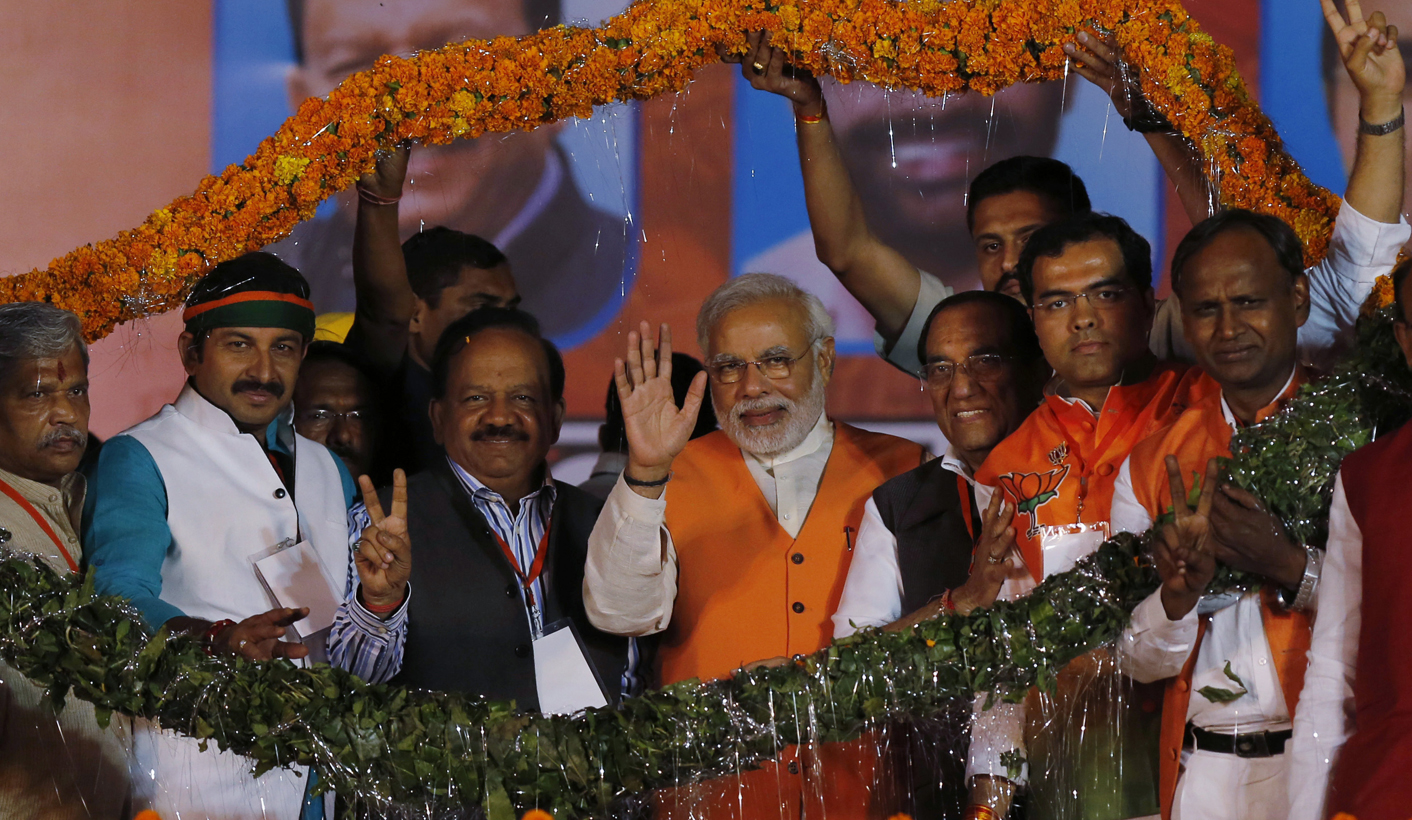 Old enough to vote for the first time, student Sheeba Shamim, the daughter of a middle class family, and young construction workers sweating on a nearby building site are impatient for a government in India that delivers jobs and hope for the future. By Frank Jack Daniel and Rajesh Kumar Singh.

They are among more than 100 million registered new voters, who will cast their ballots when the world’s biggest democracy holds a general election that will run from April 7 to May 12.

The election comes as India struggles through its longest period of sub-5 percent economic growth since the 1980s. Job growth has slowed and infrastructure projects stalled just as the biggest youth bulge the world has ever seen nears its peak in a country where more than half its 1.2 billion people are aged under 25.

Shamim, a 20-year-old undergraduate in media studies at university in Patna, the capital of Bihar, one of the states that make up India’s Hindi speaking heartland, is hungry for change.

“I want India to become the world’s biggest economy. I want my country to be at the top. If we get a perfect, strong leader, that day is not far away when we actually get there,” Shamim told Reuters in a leafy college campus.

A few hundred metres away, 22-year-old construction worker Ashok Tiwari dreams of becoming a music star. Right now, he’s earns $3 a day building luxury flats for the newly wealthy in what is one of the world’s fastest growing cities.

“There are many issues that require urgent attention. Corruption is the most important of them,” Tiwari says. “You have to make sure that jobs don’t go to only those who have money and can pay for them.”

Having led the country for a decade, octogenarian Prime Minister Manmohan Singh is due to retire, leaving behind a Congress Party dogged by graft scandals and pilloried for its poor handling of the economy.

India needs far faster economic growth rates than the 4.9 percent expected for the fiscal year that ends on March 31, but it also needs to reduce inflation, currently running just over 8 percent.

Finance Minister P. Chidambaram says economic growth averaging 8 percent is required to generate jobs for the increasing numbers of youth joining the workforce. Some 200 million people will reach working age over the next two decades.

How well the next government does on that score will decide whether India will follow China’s dynamic growth path or resemble Brazil in the 1980s, politically fragile and poor. Even by the government’s own estimates 270 million Indians still live in poverty despite gains made in the past decade.

The ambitions of youngsters like Shamim and Tiwari reflect changes taking place in giant northern states like Bihar and neighbouring Uttar Pradesh, which have a combined population almost that of the United States but have seen their development lag while other regions have flourished.

Semi-urban sprawl and new roads blur boundaries between villages and towns, while migration, new media, mobile phones, and of course television, mean people are more keenly aware of how the lives of others are improving faster than their own.

“Information has been democratised,” said Saibal Dasgupta of the Asia Development Research Institute, a think tank in Patna. “Aspirations have no upper limits now. Even provincial India has become aspirational.”

This mood seems to favour opposition candidate Narendra Modi. The leader of the Hindu nationalist Bharatiya Janata Party (BJP) has marketed himself as the man who will kickstart the economy, bring in factories, and educate the densely populated and still-poor heartland states.

“We should be like China or America,” said Ravi Prakash Shukla, 23, a science graduate who recently joined the BJP youth wing to support Modi’s campaign.

“I feel we can do better because we are young,” he told Reuters at a rally in Uttar Pradesh.

A BJP official involved in drafting the party’s manifesto, due to released next week, said it would include ambitious goals to create 250 million jobs over the next decade, build 100 ‘smart’ cities, and construct a high speed rail network.

Critics acknowledge Modi’s credentials as an economic manager, but say he is autocratic and has sectarian tendencies that could alienate India’s large Muslim minority.

Opinion polls say support for Modi to become India’s next prime minister is at least double that of his nearest rival – the Congress party’s Rahul Gandhi.

Modi, 63, is even more popular among the young.

India is still largely rural, but a government jobs survey shows that, for the first time, the number of people working on farms has declined over the past decade, reflecting greater opportunities to study or seek higher-status work.

However, the same 2013 data shows that construction work, much of it on basic rural building sites, has been almost the only employment created on a large scale since the Congress party took power in 2004.

Tiwari, who supports Modi, is part of a wave of migrants drawn back to Bihar by a construction boom, having spent years zig-zagging across the country, working in an ice-cream factory and a steel mill.

BEWARE OF THE NEW

India’s fractured political landscape, with its dozens of regional parties, makes it hard to be sure whether the BJP will win enough seats for Modi to become prime minister. For all his appeal to people’s economic aspirations, regional and caste politics will play a big part in how people vote.

Whatever government emerges, it will almost certainly be an ideologically diverse coalition, and it will not be an easy task to create all the jobs needed.

Investment growth is set for an 11-year low, and government finances are tight, with a fiscal deficit equivalent to 4.6 percent of gross domestic product only achieved with the help of some creative accounting.

In the past three years, India slipped from being the best to the worst in terms of improved productivity among large emerging markets. In 2013, productivity actually dropped, according to data released in January by U.S. business research group the Conference Board.

Modi has campaigned hard in Bihar and Uttar Pradesh, contrasting their poverty with the success of his industrialised home state of Gujarat, which enjoys relatively high per-capita income and low unemployment.

Not everyone is ready for Modi. The supervisor at Tiwari’s building site advised the young man to resist the attraction of believing too readily that Modi could solve his problems.

“You can only have one father. Tomorrow you can’t start calling someone else your father,” supervisor Kaushal Kishore Singh told him. But then Singh is 72 years old. DM

Photo: Hindu nationalist Narendra Modi (C), prime ministerial candidate for India’s main opposition Bharatiya Janata Party (BJP) and Gujarat’s chief minister, waves as his other party leaders watch during a rally in New Delhi March 26, 2014. India’s main opposition party would welcome more foreign direct investment in defence, if elected, but would delay opening up big-box retail to global players now barred from the country’s market of more than 1.2 billion people. The nationalist BJP, which opinion polls show is on course to win the most seats in an election starting April 7, would also introduce a general sales tax and overhaul the financial sector, its manifesto is likely to say. REUTERS/Adnan Abidi