An unfinished war: The unseen horrors of ruptured Sri Lanka 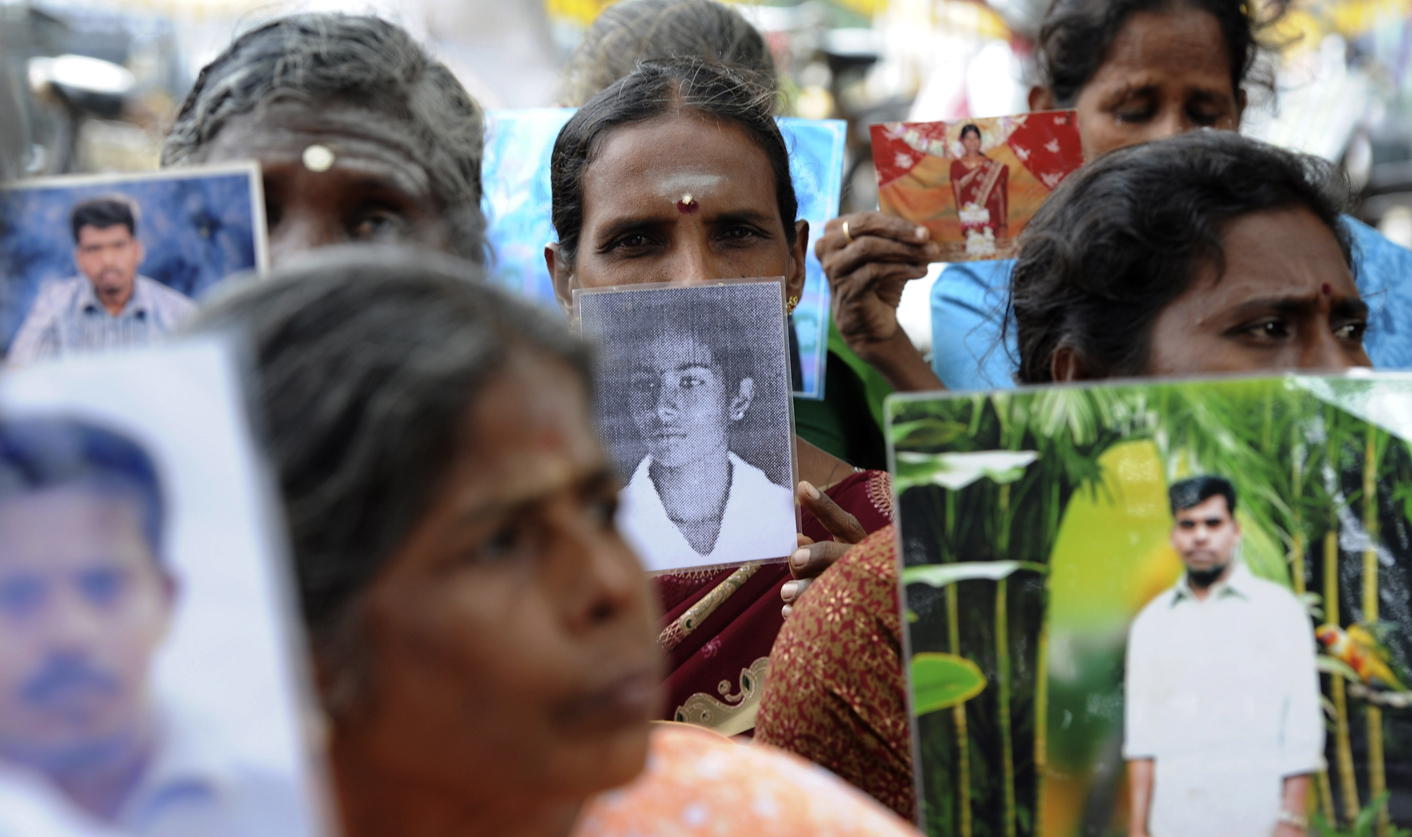 A new report, “An Unfinished War: Torture and Sexual Violence in Sri Lanka, May 2009-March 2014" lays bare the horrific tactics used in Sri Lanka's continuing war against ethnic Tamils. The report comes ahead of the 26 March UN Human Rights Council Debate on a US-led resolution calling for an international investigation into alleged war crimes as well as ongoing violations in the present. By MAUREEN ISAACSON.

The report, written by human rights lawyer Yasmin Sooka, the Bar Human Rights Committee, England and Wales, and the International Truth & Justice Project, Sri Lanka, is based on the testimony of 40 victims; and concludes that their credible accounts, establish a prima facie case for post-war crimes against humanity. These involve torture, rape and sexual violence by the Sri Lankan military five years after its defeat of the Liberation Tigers of Tamil Eelam (LTTE) separatists, ending a 26-year territorial conflict. The continued violations take place in “a climate of impunity “and absence of accountability” – endorsed at the “highest level”.

Taken from Kafka’s The Trial, the epigraph of the report is apt, setting out the imagined boundaries of unattainable justice. “You can’t defend yourself against this court. All you can do is confess. Confess the first chance you get. That’s the only chance you have to escape, the only one. However, even that is impossible without help from others”.

The reality depicted in this report is that there is no court; as there is no charge and the confessions elicited by torture and sexual violation is not the purpose of the detention. Escape does not mean an end to the abuse, either.

Among its demands, the US-led resolution to be debated on 26 March in the Human Rights Council calls for an international probe into alleged war crimes in Sri Lanka as well as an inclusive consultative truth-seeking process, namely a truth commission. In light of the 2009 resolution in the UN Human Rights Council, which saw the Government of Sri Lanka congratulated for its successful defeat of terrorists; the LTTE or Tamil Tigers, this is a welcome move.

Yasmin Sooka, who was one of the three-member Panel of Experts appointed by the UN Secretary General, which found credible allegations of war crimes and crimes against humanity committed by both sides, said the patience of the council members appears to be wearing thin amid the ongoing violations of the rights of human rights defenders and state critics, including journalists. The current report “Unfinished War” confirms that war against the Tamils is continuing and that the use of abductions, arbitrary detention, torture and sexual violence is intensifying. In this context, reconciliation is unlikely.

At last count, the core group of countries calling for the resolution and led by the USA and the UK were confident that they would muster sufficient support to pass the resolution. In the meantime, the government of Sri Lanka has widened its net and pro-government groups protest outside the UN office in Colombo; burning US President Barack Obama and Navi Pillay, the UN High Commissioner for Human Rights, in effigy.

The government of Sri Lanka has sought the South African government’s counsel on the establishment of a truth commission, although the South African Truth and Reconciliation Commission was set up only after the democratic structures were in place and after a year-long consultation process. How this would work in Sri Lanka at this time is unfathomable. The report reveals that among those detained and abused by the Sri Lanka security forces are those who testified against the government of Sri Lanka at the government’s own commission of inquiry appointed after the war, the Lessons Learned and Reconciliation Commission (LLRC). Although the report says that the Government of Sri Lanka justifies the militarisation of the North of Sri Lanka with claims of an ongoing threat from the LTTE, the 2013 United Kingdom Asylum Country Guidance on Sri Lanka has noted that the LTTE is “a spent force” and there have been no terrorist incidents since the end of the war.

The fact that the witnesses in the sample posed no direct threat to the government of Sri Lanka further illustrates the spurious nature of the government’s claims and shed light on its nefarious dealings. The witnesses were aged between 25 and 30 at the time of detention; they are from North and East of Sri Lanka; most reported being forcibly recruited into the LTTE when young, were low-level operatives, and most had attempted to escape from the conflict before the bloody phase in 2009.

They had gone to the UK to study. Most were asylum applicants, stopped while passing through emigration at Colombo Airport where they were detained at the airport or abducted later by the security forces. The report describes a sophisticated system of surveillance bolstered by an extensive database, linked to the Sri Lankan High Commission in London. Its tentacles into the Diaspora, ensure extensive monitoring of activists and profiling is facilitated by state of the art face detection equipment. Once detained, the torture and sexual violation continued in the cases documented in the study, until bribes were solicited to procure release and the witnesses managed to leave the country again.  But there is no end to the cycle of abuse. Witnesses reported that once they were out of the country the security forces began to harass their families.

While the writers of the report note that in the interests of national security the government of Sri Lanka is entitled to take precautions against a resurgence of conflict, they say this kind of surveillance in place is disproportionate to the perceived threat. Importantly, the interests of national security can never be a justification for torture and sexual violence and the pernicious emergency regulations and terrorism legislation are justified by the so-called threat, and allow the government to maintain the intense securitisation of the North and East and the high security zones that keep the Tamils under siege.

The abductions by members of the police; the Central Investigation Department (CID); the Terrorist Investigation Division (TID), always in the notorious ‘white vans’, known to make Tamil people disappear; or in military vehicles strike terror. It is here that the Kafkaesque narrative takes shape. The abductors called the witnesses by name, demanded their identity documents, announcing they were to be taken for questioning, for crimes for which they were never charged. No arrest warrants were issued. Witnesses described being pushed into the white vans, blindfolded, hands tied or handcuffed, thrust face down and often told to shut up, the radio tuned into Sinhala, the official language in which Tamil people are usually not schooled.

The blindfolding continued as the witnesses were led into a small airless, vile-smelling and lightless cell, its floors cold and filthy, sometimes bloodstained. The moans and screams of Tamil voices warned of what was to come. All of the witnesses were repeatedly tortured, flogged with a range of implements including cement-filled plastic pipes, sticks, batons and electrical wires, and confessions were forced with hot metal rods, suspension and falaka (beating on the soles of the feet). Electrocution, asphyxiation in water or with plastic bags containing petrol or chilli powder led in some cases to signing confessions in Sinhala or blank pieces of paper, but confessions did not end the torture. Questions focusing on LTTE connections, those of family members and hidden arms caches, looked to a more comprehensive picture of existing status of networks.

Aware of the taboo in Tamil culture, the deep shame and stigma carried by sexual abuse, the perpetrators honed their torture skills, raping and defiling both men and women, some of whom had no prior sexual experience. In this report you will read about a young male witness, forced to perform oral sex on as many as three men who fetched him from his parents’ home and his fear of being killed for reporting the abuse, coupled with a perception that sexual abuse is “something shameful and low-grade”. This ensured his silence, but it led him to seek safety in the LTTE and revenge, “for what they did to me.” The motivation for the unspeakable violations, which took place amid derision and hatred, are not difficult to discern. It is less easy to comprehend the resilience of the witnesses, who often held out under torture and who decided to make statements to the dedicated team of lawyers who worked on this report, in the hope that the abuse can be stopped. The consequences for the young men and women on whom the perpetrators urinated, including on the young man who reported his perpetrator “forced his penis in my anus and in my mouth and said ‘Tamil’s people’s mouths were only good for oral sex’”, are also immense. The medico-legal reports supplied by the medical experts who examined the witnesses, outline the agony and continued pain and fissures suffered from those forced to endure anal and vaginal rape, as well as instrumental rape, often with batons. They describe the frequently attempted suicide, the post- traumatic stress manifesting in flashbacks, paranoia, the sense of disconnection, hopelessness and deep depression.

Photo: Sri Lankan Tamils hold pictures of family members who disappeared during the war against the Liberation Tigers of Tamil Eelam (LTTE) at a protest in Jaffna, about 400 km (250 miles) north of Colombo November 15, 2013. REUTERS/Stringer