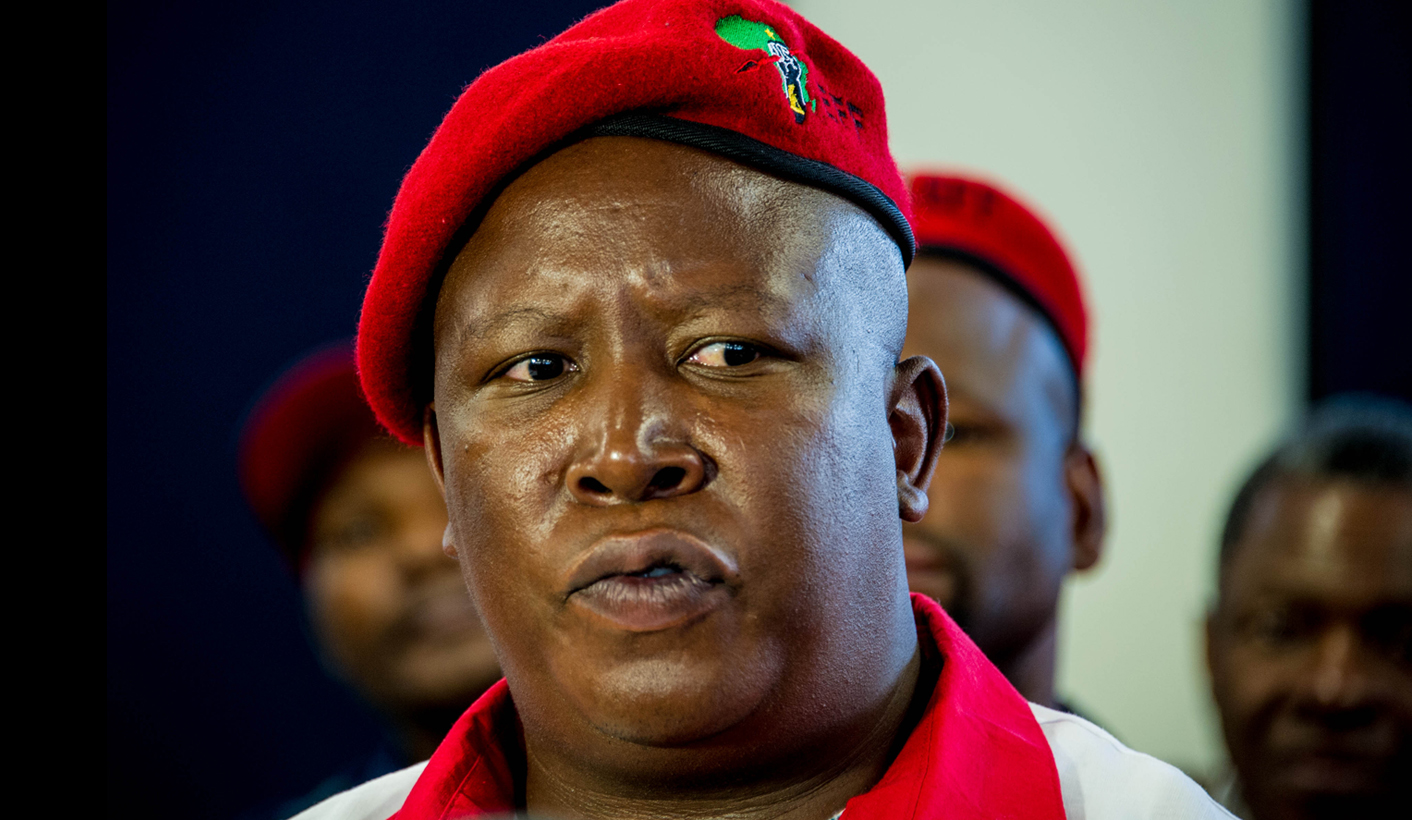 Next in line to announce their list of candidates for the 2014 election has been the EFF, which called a press conference at the Orion Hotel in Braamfontein, Johannesburg. Julius Malema never being one to disappoint, a couple of other announcements were also made, including alliances with other parties. By BHEKI C. SIMELANE & THAPELO LEKGOWA.

The EFF may be the new kid on the block, but the commander-in-chief says they’re not messing around. Still, at least one of its candidate choices is likely to raise eyebrows, and the fate of the party’s intrepid leader remains uncertain. So it was with some interest that a room full of journalists gathered to hear the party’s scheduled announcement.

The press conference kicked off just after the clock struck noon, and commander-in-chief Julius Malema arrived only just in time. He soon made his presence felt, however, immediately demanding that anyone who was not a journalist or not invited leave the room directly.

Malema’s professional intentions were obvious from the start. It is clear that since he left the ANCYL, much work has been done on his media presence. Reading out the names of the candidates (excluding his own – Floyd Shivambu had that honour) he was word-perfect.

Advocate Dali Mpofu was absent at the press conference, owing to his commitment to the Farlam Commission, but he was named as the EFF’s candidate for Gauteng Premier.

There were no major surprises on the list, except perhaps Alfred Motsi, who was introduced to political activism through the South African Youth Congress and later joined uMkhonto we Sizwe, the military wing of the ANC. Furthermore, Motsi embarked on a campaign with the late Councillor Moss Phakoe to convince the ANC national leadership that the former mayor of Rustenburg municipality, Matthew Wolmarans, was corrupt – a campaign which cost Phakoe his life and attached a great deal of stigma to Motsi.

Motsi is the EFF’s candidate for North-West premier, placing him at the centre of fertile land and mineral resources, but also the pressure of labour strikes, spontaneous protests and high levels of brutality towards farm workers.

Explaining the choice of candidates, Malema said the EFF based their selection criteria on five main elements: gender, geographic spread, generational mix, political background and political commitment. He added that the party had not necessarily taken academic backgrounds into consideration.

“This people are not municipal managers,” he said.

Malema added that the EFF meant business, emphasising that they were going head-to-head with the ANC. “It is the EFF and ANC contesting 830 positions; not even the DA was able to come close to this figure, which is an indication that the EFF’s intentions are serious,” he said.

The announcement of candidates follows weeks of uncertainty and speculation over Malema’s complaint regarding the party’s R600,000 deposit that needed to be raised; Malema had argued that this was unfair practice on the part of the IEC, adding that it was unrealistic to expect poor people to come up with that kind of money just to realise their democratic right to participate in the election process.

A further development saw Malema welcoming the Socialist Party of Azania (SOPA) and the Black Consciousness Party, who are understood to be teaming up with the EFF, meaning they are directing their election resources towards the EFF election machinery. The partnership during the election does not mean the other parties are absorbed by the EFF, however; they have choice either to remain or to dissolve and be full members of the EFF.

Regarding the charges that are still pending against him, Malema said there was no law that prevented one from occupying a seat in Parliament while they had charges pending against them. If this was a fight the State wanted, it was a fight they would get, Malema said, adding that if necessary, the case would go to the highest court in the land. “We will be busy for a long time, it seems,” he said.

If the EFF does not make up the majority in any province and is forced into partnerships with other parties, they do not intend to approach any parties first, but are still open to being approached, Malema said. However, he added, any political party that approaches them for collaboration must be willing to work around their seven non-negotiable pillars, e.g. expropriation of land without compensation.

The EFF will gladly work with the ANC if they agree with these pillars, said Malema.

At the conference, media voiced the opinion that the EFF included a number of comrades who were rejected by the ANC or failed within the ANC and found within the EFF a new home to feather their failures. In defence, the EFF leader pointed to the people in the list who had not had a chance to grow rich in government and said it was rather a case of them not being power hungry.

Certainly there are areas in South Africa that are ripe for a strong new political voice. But whether the EFF will be that voice – and the voice that delivers on its promises – remains to be seen. Much is hanging in the balance; Malema has yet to prove himself a reliable and trustworthy leader. But campaigning? THAT he knows, very, very well. DM