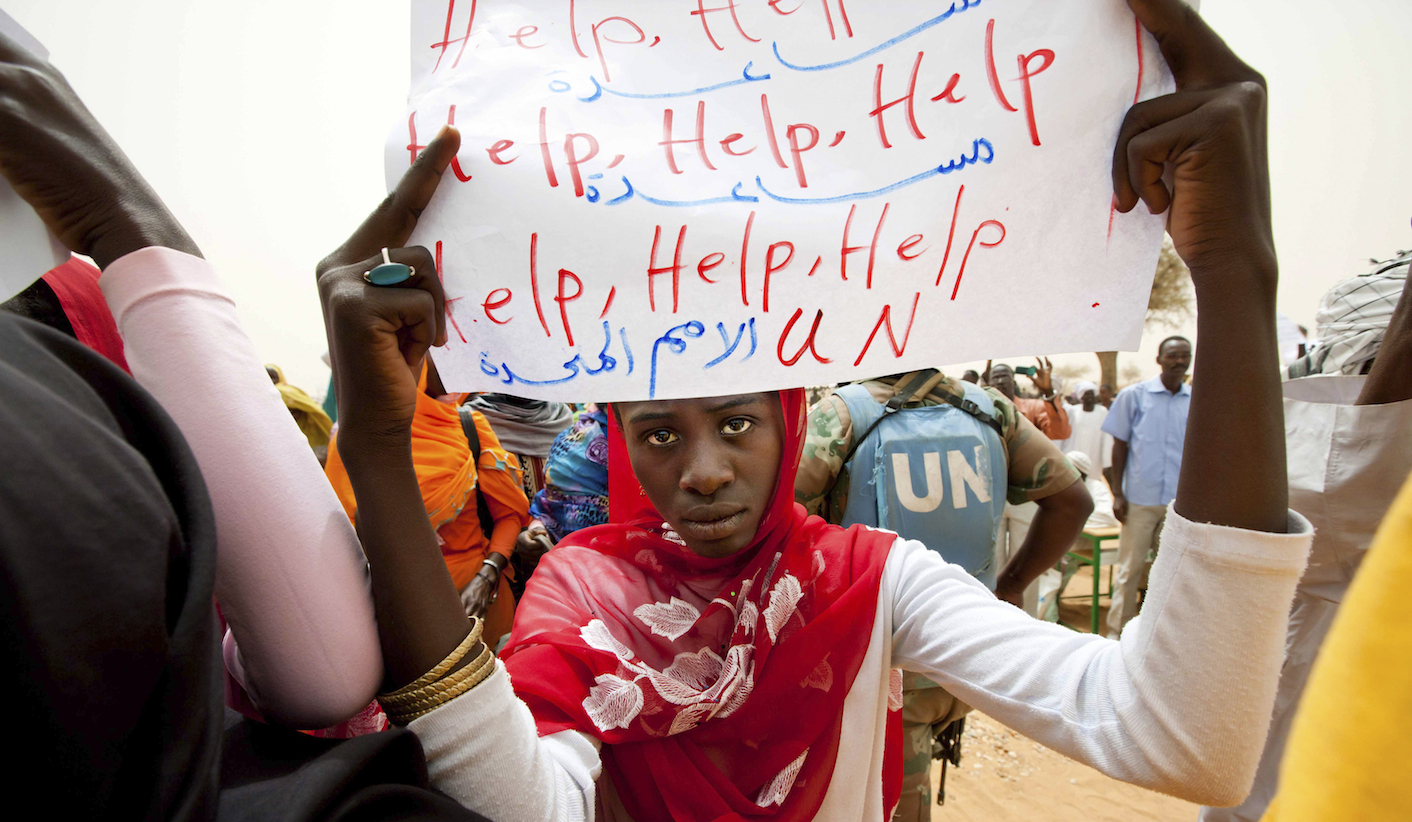 Darfur has slipped off the front pages in recent years, replaced by newer, more exciting causes célèbres. This doesn’t mean the situation has got any better. As fighting flares up yet again, it’s worth remembering what is going wrong – and how it is affecting not just Darfur, but the whole region. By SIMON ALLISON.

There was a time when Darfur was the African conflict of choice. Its cause was feted by politicians, celebrities and fashionistas, its images splash­­ed all over newspaper front pages and TV channels. There were concerts. George bloody Clooney wouldn’t shut up about it.

Under immense public pressure from advocates, the Sudanese government’s actions there were officially classed as “genocide” by the USA in 2005 and President Omar al-Bashir was eventually indicted for crimes against humanity by the International Criminal Court in 2009 – not that he ever intends to hand himself over for prosecution. This was, as more seasoned observers had feared, a pyrrhic victory: while successfully turning Sudan into a pariah state, the campaign also closed off potential avenues of negotiation and got humanitarian agencies kicked out of the country, with devastating consequences for the hundreds of thousands of people reliant on international aid.

But nuance and complexity makes for a difficult narrative, and difficult narratives are hard to sell. So the international disaster road show moved on. An earthquake in Haiti; a near-nuclear meltdown in Japan; the outbreak of civil war in Syria. And in Africa, other, fresher stories grabbed most of the limited available attention and resources. The Arab Spring was a big one, then the wars in Mali and Somalia. Now the focus is on the Central African Republic, where there is once again talk of genocide.

But Darfur hasn’t gone away. It’s still there, and it’s still fighting. And things might just be about to get worse.

On Wednesday, the United Nations’ peacekeeping chief Herve Ladsous told reporters that approximately 100,000 people have fled their homes in the region in the last six weeks, as fighting between government forces and armed rebel groups intensifies. This is in addition to the two million people already been forced from their homes by the conflict (400,000 in 2013 alone). “Their arrival is having an overwhelming impact on the already limited water, food and health care available in the camps. The increase in displacement is a worrying trend at a time when civilians were being encouraged to return to their villages of origin,” said UN High Commissioner for Human Rights Navi Pillay, of the newly displaced.

In a related incident, a university student in Khartoum was killed as police responded to a protest in brutal fashion. About 200 students from Darfur at the University of Khartoum had gathered on campus on Tuesday to register their anger at the escalating violence at home. Police responded with tear gas and batons – two students were injured so badly they required hospitalisation, and one died later. The police were typically unapologetic: “Police call on the students not to give members of the rebel movements a chance to work inside the student body,” they said in a statement. “Because these groups are outlaws and do not have any approval to conduct political activities.”

The Sudanese government, of course, has no intention of backing down. While the students were demonstrating, five bigwigs – Sudan’s 2nd Vice President Hassabo Abdel-Rahman, minister of interior Abdel-Wahid Youssef, defence minister Abdel-Rahim Mohamed Hussein, governor of North Darfur state Youssef Kibir, and the director of the highly influential National Intelligence and Security Services (NISS) Mohamed Atta Abbas al-Moula – were meeting behind closed doors. According to the fairly reliable Sudan Tribune, the quintet agreed a plan to crush one of the main rebel groups within 72 hours, and reclaim all rebel-held territory. The phrasing is ominous: previous government crackdowns have resulted in mass civilian casualties and even more displacement. This is what Darfur should now be expecting.

To be fair to Clooney, he has not moved on, and has remained involved in raising awareness for Darfur and, through his Satellite Sentinel Project, in monitoring violence throughout Sudan more generally. Earlier this month, his organisation United to End Genocide, along with several others, signed its name to an open letter calling on “UN Security Council and ICC Member States to End Impunity for Genocide in Darfur”.

“Now in its eleventh year, Darfur is the longest-running genocide in history, yet Bashir has evaded justice for half a decade while actively perpetrating atrocities in Darfur and throughout Sudan. Since 2003, more than 300,000 people have been reported killed, thousands of villages have been deliberately destroyed, and at least 3 million civilians have been forcibly displaced in Darfur alone. Millions more are targeted by President Bashir’s regime in South Kordofan, Blue Nile, Abyei, and throughout the country,” the letter said [note the discrepancy between the UN’s number of displaced people and the figure employed here; activists have often been accused, with some justification, of exaggerating the facts].

It concluded: “The failure to hold Bashir accountable not only has devastating effects inside Sudan, but it also sends the wrong message to leaders like Syrian President Assad and others perpetrating extreme violence throughout the world.”

But it’s not just about symbolism and precedent: the ongoing troubles in Darfur continue to have a direct and negative affect on the region as a whole. In 2011, for examples, Sudan accused Darfurian rebels of going to Libya to the help of Muammar Gaddafi, then fighting desperately for his regime (and life). More recently, fighters from Darfur have been implicated in the crisis in the Central African Republic, selling themselves as mercenaries to the Seleka rebel coalition that ousted Francois Bozize in 2013 and precipitated the country’s spiral into chaos. Meanwhile, rumours abound that Ugandan warlord Joseph Kony is hiding out in southern Darfur, taking advantage of the general lawlessness in the area.

The Darfur situation is especially concerning for South Africa, which has more than 800 troops in the area under the aegis of the United Nations-African Union Mission in Darfur (Unamid). Recently, Unamid’s performance was criticised by America’s UN ambassador Samantha Power, who demanded that the mission be “more aggressive” in carrying out its mandate to protect civilians. Perhaps there are lessons here to be learnt from the Democratic Republic of Congo, where a UN force with an offensive mandate (again with a South African contingent) enjoyed considerable success by taking the fight to the rebels, rather than vice versa.

Darfur is no longer the cause celebre it once was, George Clooney notwithstanding. This does not mean, however, that it has been “fixed” or “solved” – far from it. Tensions remain high, and violence is a daily occurrence. It still deserves our attention. DM

Photo: An internally displaced child looks on at the vicinity of an African Union – United Nations Hybrid Operation in Darfur (UNAMID) base near Labado, South Darfur. (REUTERS/Mohamed Nureldin Abdalla)