Analysis: Who’d be a witness in the Pistorius trial? 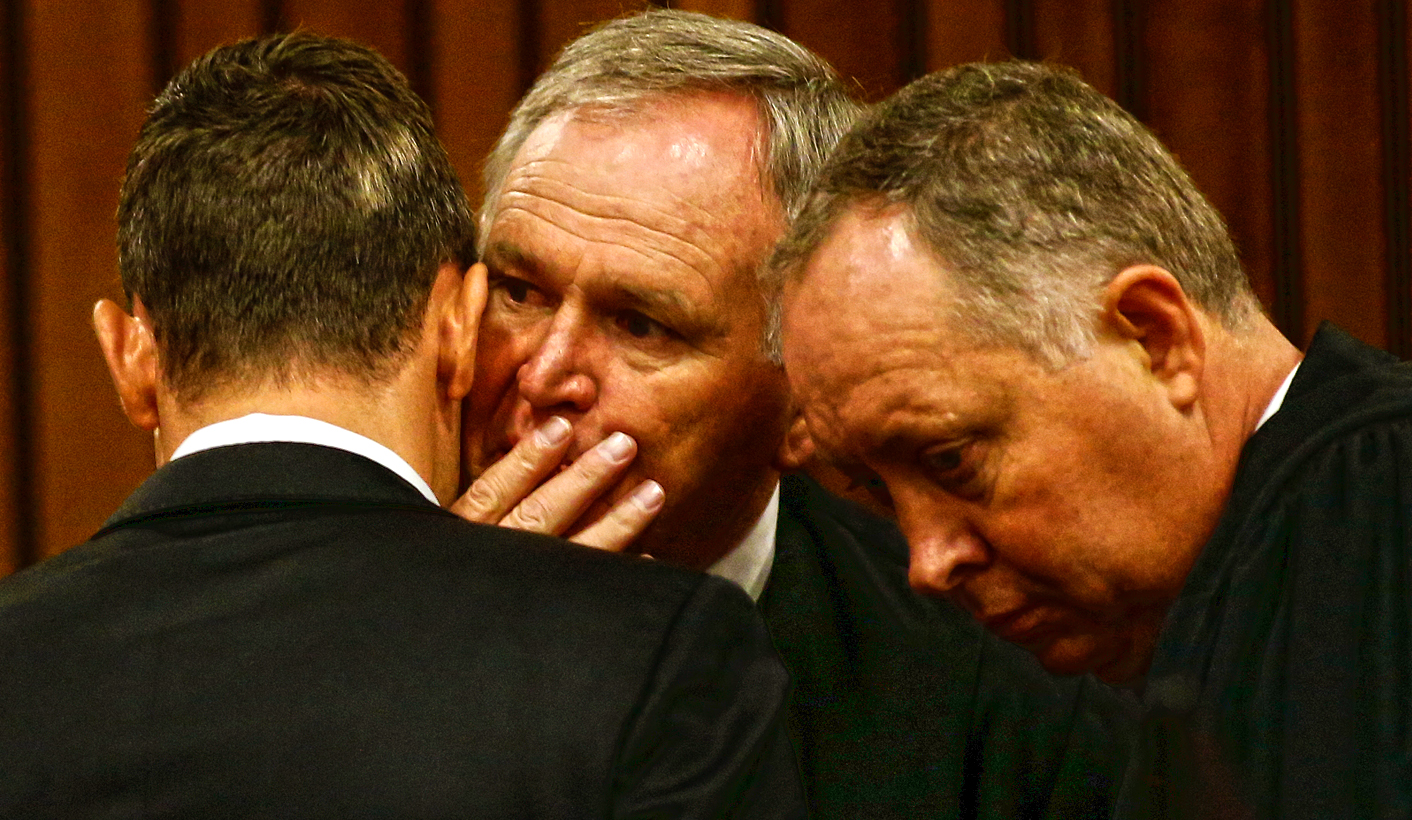 Spare a thought for the witnesses in the Pistorius murder trial. In coming forward to do their civic duty, they must face not only sustained interrogation by some of South Africa’s fiercest lawyers, but also the stress of doing so while being watched or heard by an international audience. If you’re Michelle Burger’s husband Charl Johnson, you’re now also looking at having to change your cellphone number. It’s hardly an enviable prospect – but they still have it luckier than many. By REBECCA DAVIS.

Should Gauteng Premier Nomvula Mokonyane have attended the morning session of day three of the Oscar Pistorius murder trial? On the one hand, it is the biggest thing happening in her province at the moment from a news perspective. She also made it clear to journalists that she was present not just in her capacity as Gauteng Premier but also as a member of the ANC Women’s League.

On the other hand, Mokonyane inevitably attracted criticism on social media for not having attended other, less high-profile murder trials involving female victims, and for not having demonstrated the same support which she gave to the family of Reeva Steenkamp to the family of other victims of crime, or even natural disasters. That’s politics for you.

It’s clear that Mokonyane’s sympathies are overwhelmingly with Steenkamp’s relatives. She chose to sit next to Steenkamp’s cousin Kim Martin and her partner, who have been representing the Steenkamp family at the Pistorius trial each day, and chatted to them intermittently throughout. Mokonyane was heard expressing sympathy for their loss “as a mother”, and as she exited the courtroom she urged them to call her if necessary and said: “Stay strong. You are not alone.”

But during her brief attendance at the courthouse, she also made a point of seeking out the Pistorius trial’s first witness, Michelle Burger, to shake her hand and thank her for her testimony. Since Burger testified against Pistorius, this might be read as evidence of Mokonyane’s bias. But it’s also appropriate that she would thank Burger for performing her task as a witness, because at the moment it seems that serving as a witness in the Pistorius trial is a pretty daunting job.

Of course, being a witness in any trial can be daunting, particularly if you are less educated, less privileged and less prepared than the witnesses in the Pistorius trial seem to be. That’s why the National Prosecuting Authority (NPA)’s guide to the criminal justice system makes a point of expressing gratitude to those who do testify. “Thank you,” the NPA writes. “Being a witness is a brave thing to do and will help the police and the prosecution to make sure that justice is done. Thank you for your help. It is very important to us, and to the whole community.”

Witnesses can make or break trials. In the case of prosecuting rapes by police officers or rapes while in police custody, for instance, it was estimated in 2010 that the untraceability of witnesses was the third most common reason for courts withdrawing cases. Even when witnesses are present and accounted for, if they are found to be unreliable on the stand, they can sink a case. Amidst the uproar of the failure to hold anyone accountable for the killing of Andries Tatane during a service delivery protest, the NPA pointed the finger of blame squarely at witnesses who changed their original statements, mixed up identities and were “evasive, not credible and unreliable”.

A solid, honest witness is a gift, and their contributions towards attempting to establish the truth of a civil or criminal matter should be acknowledged. This is doubly the case if they are testifying under arduous conditions. While the Pistorius trial is exponentially cushier for everyone involved than the vast majority of cases which pass through South Africa’s overburdened criminal justice system, there’s no doubt that there are elements of extreme stress involved for the witnesses.

We saw evidence of this on Wednesday, when defence lawyer Barry Roux, searching for proof that married witnesses Michelle Burger and Charl Johnson had colluded on their testimony, demanded to know why Johnson had not testified directly after Burger. Instead, witness Estelle van der Merwe followed Burger and preceded Johnson in the witness stand. Roux’s insinuation was that the reason for this was to allow Burger and Johnson to confer to ensure their respective testimonies reinforced each other’s.

But Burger responded that the reason was because Van der Merwe was so nervous that she said she could not survive another day of the trial, and that she “wanted her life back”.

It’s not hard to see why she might feel like that. Both Roux and Nel are two of the top lawyers in South Africa, and facing a sustained interrogation from them in the dock when so much is at stake would always be nerve-wracking. Add to this the prospect that even in a case this high-profile, you may be assigned an interpreter who is not up to the job, and end up having to take over the task yourself and give testimony in your second language, as Michelle Burger ended up doing (in contravention of her rights).

Then add to this the fact that even if you decline permission to have your face broadcast on the live TV feed, your voice may be relayed to an international audience of potentially millions, who will discuss and dissect your character on social media as you proceed. Throw in the fact that the media may, even accidentally, misinterpret Judge Dunstan Mlambo’s court order and believe they have the right to publish or broadcast old still photographs of your face while you’re testifying, as happened to Michelle Burger on Tuesday.

Then add the fact that the international media has been harassing witnesses’ families for “dirt” on them, as the Sunday Times reported last weekend. And top it all off with the hopefully isolated possibility that the defence’s Barry Roux will read your cellphone number out in court, which was the experience of witness Charl Johnson on Tuesday.

It’s still unclear why Roux would find it necessary to read out Johnson’s cellphone number in full except as an intimidatory tactic, since it was by no means indispensable to the context of the cross-examination. Johnson, led by the state’s Gerrie Nel, told the court on Wednesday morning that he had been besieged with phonecalls, SMSes and voicemails ever since. Many were likely from media outlets, but some were abusive: one voicemail asked why he was lying in court.

Adversarial justice can be difficult to watch in action if you’re unused to it, and it’s hard not to feel a degree of empathy for practically anyone who is clearly nervous and being grilled in public. Naturally, lawyers from either side shouldn’t ‘go easy’ on witnesses because the public feels sorry for them. But it’s undeniable that there are a number of extraneous factors to the position of being a Pistorius trial witness thus far, beyond the strain of cross-examination, which render the task quite challenging.

There are a remaining 101 witnesses on the state’s list who can be called to the stand. Some will have an easier ride than others, by virtue of the content of their testimony or their proficiency in English: the three witnesses who testified on Wednesday as to the incident when Pistorius accidentally discharged a gun in a restaurant – Kevin Lerena, Jason Loupis and Maria Loupis – had a relatively easy time of it, beyond the pressure of the global attention. ‘Lay’ witnesses, of the kind we’ve seen thus far, are always likely to find the experience more stressful than police or expert witnesses, for whom it’s all in a day’s job.

Still, as we’ve said, despite the stress attendant on the visibility of the case, these witnesses still have it a lot easier than many others in South Africa’s justice system. For one thing, we have no reason to believe that their lives are in danger, unlike the average 300 people per year who have to be taken into the witness protection programme in this country. Some consolation, perhaps. DM

Photo: Olympic and Paralympic track star Oscar Pistorius (L) listens to his lawyer Barry Roux (C) ahead of his trial for the murder of his girlfriend Reeva Steenkamp, at the North Gauteng High Court in Pretoria, March 5, 2014. REUTERS/Siphiwe Sibeko