Cricket: Smith didn't have to be pretty to be effective

Cricket: Smith didn’t have to be pretty to be effective 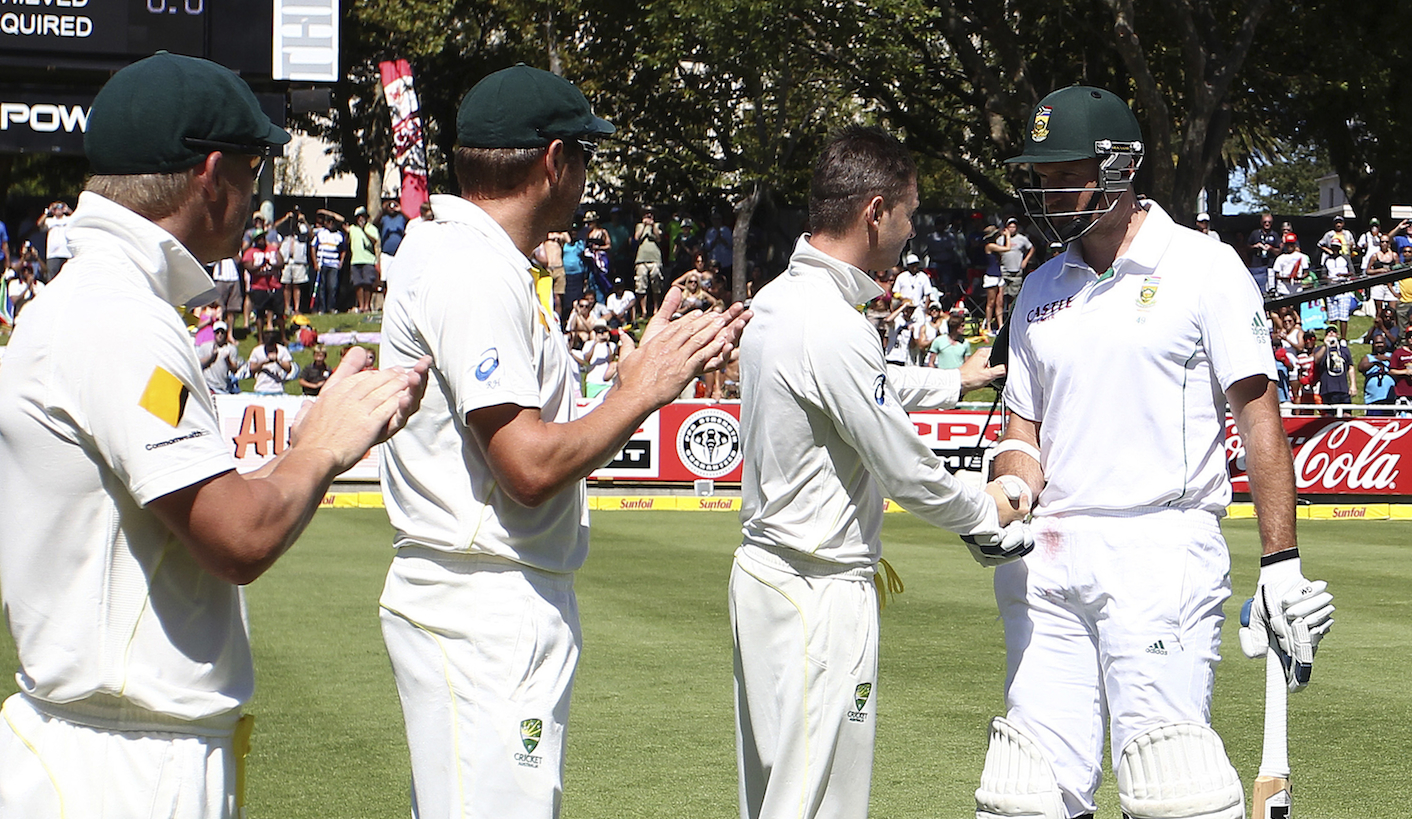 Most people writing about Graeme Smith’s career over the next few days will probably mention his technique. An unorthodox and ugly approach has worked for the South African skipper for over a decade and he proved that one didn’t need aesthetics to be effective. By ANTOINETTE MULLER.

Anticipation, a slight reverberation from the modest Newlands crowd and a guard of honour from some of Smith’s fiercest rivals marked the beginning of the end for South Africa’s most decorated Test captain.

But the moment was over before it had time to even begin. A tame poke at a ball which Mitchell Johnson dug in short-edged to Alex Doolan at short-leg, the fielder who had been placed there to get Graeme Smith out through his favourite scoring position throughout the series against Australia, and just like that, it was done.

It was a sight which cricket lovers had come to see often through the years. It’s a sight which irked many, ended a few careers, but enthralled almost all cricket lovers: Smith at the crease, working everything doggedly to the legside seemingly without ever getting out. In his heyday, it was the kind of thing that tormented many captains and teams because surely somebody with such a flawed technique could not be so effective.

His fellow teammate, Jacques Kallis, remembers that it was the kind of move that would lull bowlers into a false sense of confidence.

“When I’ve bowled to him, he always made me feel like I could get him out lbw, so he sucks you in that way – but hardly ever misses it when he’s in form,” said Kallis.

It earned him over 9,000 Test runs and an average of over 55.00 as captain. It got him 27 Test hundreds and memorable double hundreds. It played a part in ending the careers of English captains and a hundred from Smith guaranteed that South Africa won’t lose a Test every single time. It was completely unorthodox, but Smith made the most of his limitations. But even those limitations had their limits and Mark Boucher believes it’s part of the reason Smith called time on his career much earlier than most people would have expected him to.

At only 33, most batsmen would still fancy their chances of holding on another two years or so, but Smith not so much. His runs hadn’t exactly dried up, he scored a match-winning double century against Pakistan last year and managed enough runs against India to not have his position in the side questioned.

Australia exposed Smith, though. Mitchell Johnson had his number and the simple tricks which worked for him before suddenly started to look like gaping flaws, even though he had gotten away with it for the last decade.

“I think part of the reason Smith retired when he did is because his technique isn’t so good. When somebody like Jacques Kallis wasn’t quite up for it, his technique was good enough to still help him get runs,” said Boucher.

“Graeme has always needed heart and passion to get out there and dominate. He probably woke up a couple of mornings ago and felt that he was battling to get himself up for the challenge which would have meant he got exposed more than somebody with a good technique would,” Boucher added.

Shaun Pollock is another former player who has watched Smith for years and who believes Smith’s technique will be overshadowed by all his accomplishments.

“If I did have a boy, I would want him to bat the way Graeme Smith batted. I’d rather have him go to the Jacques Kallis or AB de Villiers school of batting. But that’s the nice thing about cricket, everyone has different techniques and not everything has to come from the MCC coaching manual,” Pollock said.

“You don’t always have to look pretty to be effective,” he added.

Smith is most renowned for his fourth innings record. He averaged 62.63 in the fourth innings with four hundreds and nine fifties to his name. He’s gone out to bat with a broken hand for 25 minutes in a fourth innings to try to save a Test. He’s set up fourth innings victories and salvaged draws from the jaws of defeat. That kind of tenacity and dogged determination is what will be most missed, even if it’s unlikely that the general South African public will remember most of it.

“What sums Graeme up is that even though he wasn’t technically the best, from a tenacity point of view and character point of view, he could still get runs. Once he got himself in, he never let it go. He played some wonderful knocks and if you look back at where he thrived, it was in the second innings and the tough situations when South Africa needed it. He led from the front and set the tone as the captain,” Pollock said.

Smith failed to perform in a tough situation against Australia on every occasion in this series. But to remember him for his failings over the last three Tests would be a disservice to everything he has managed previously. The full effect of the loss will take a while to settle in and he will be weaned off cricket through a stint at Surrey in England. After being caught in the crossfire of childhood and stardom, his crazy diamond will shine for a little while longer, all while another chapter closes on a legendary period of South African cricket. DM

Photo: Australia’s captain Michael Clarke (2nd R) shakes the hand of South African captain Graeme Smith (R) as he comes out to bat for the last time during the fourth day of the third cricket test match at Newlands Stadium in Cape Town, March 4, 2014. Smith is retiring from international cricket. (REUTERS/Shaun Roy)