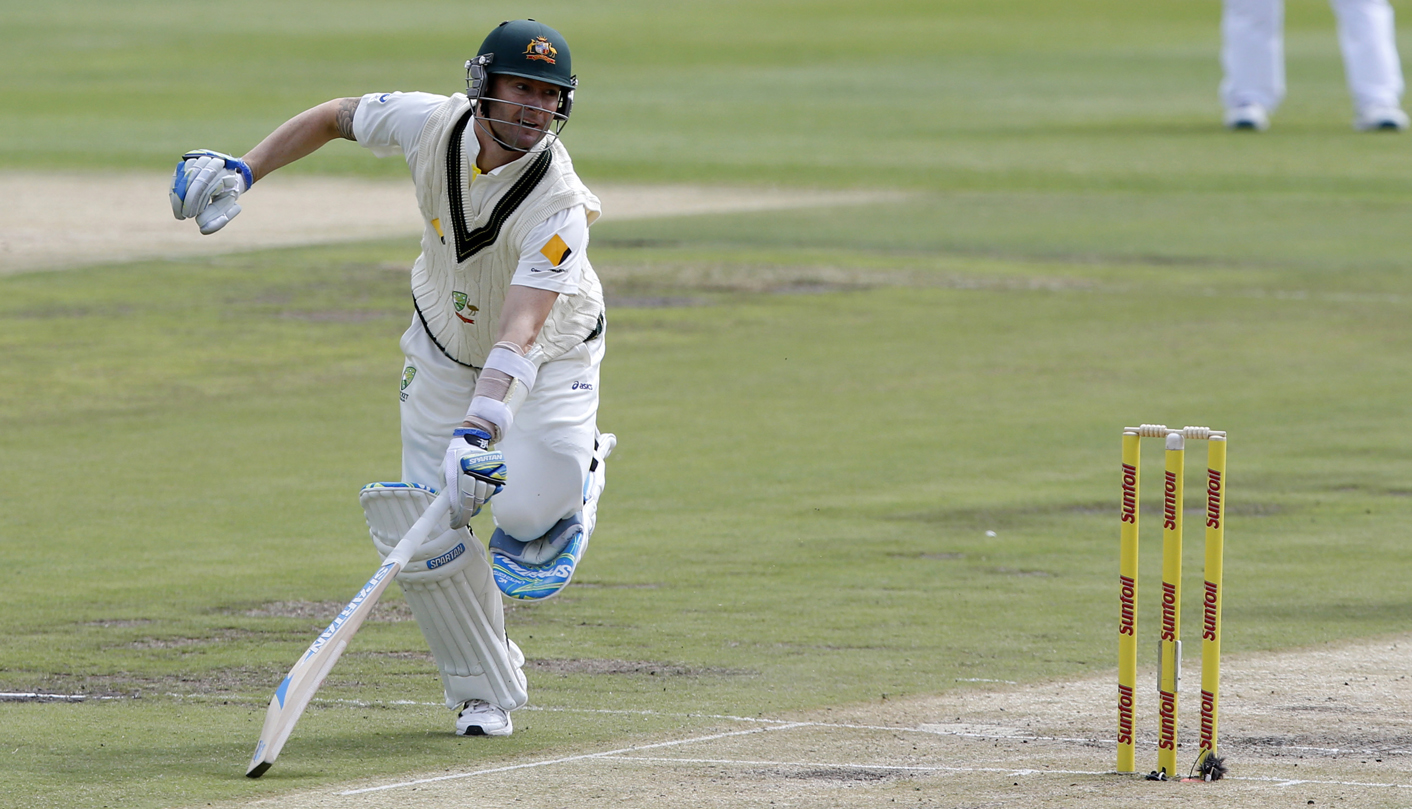 South Africa are on the back foot after just two days in the third and final Test against Australia. David Warner and Michael Clarke scored a century apiece while the hosts are a bowler short, with Dale Steyn unable to bowl due to a hamstring injury. ANTOINETTE MULLER picks five talking points from day two.

A mesmerising Michael Clarke hundred has put Australia in the driving seat at stumps on day two of the deciding third Test against Australia.

The Aussie skipper was unbeaten on 161 by close of play on Sunday with his charges amassing 494-7 in two days. South Africa are a man short after Dale Steyn was ruled out of bowling in the first innings due to hamstring niggle, but the attack was far more subdued compared to their sprightly showing in PE. JP Duminy was the most effective bowler with his part-time spin earning him four wickets thus far.

David Warner, Clarke, Steve Smith and even Shane Watson all contributed to help proper the visitors ahead. Rain halted play early on the second day which might very well be the only thing that has gone South Africa’s way in the match. There are still three days left in the Test, but the South Africans face the toughest test of the summer when they go in to bat.

The battles within the battle

Those fond of clichés will often tell you that cricket is about more than winning and losing. The first two days of the third Test between South Africa and Australia epitomised that once again. Michael Clarke was the star of two of the mini-battles. First, Morne Morkel spent most of the first day tenderising the Australian skipper with a barrage of short stuff. Clarke took the blows while not bothering with an armguard. Morkel might appear about as aggressive as a baby giraffe, but when he’s flinging balls at your body at around 145km/h, he becomes pretty scary. Clarke survived, though, and made his way to 92 on the first day. On day two, under a cool and cloudy Newlands sky, he pottered along to 99 and it was then battle galactic all over again. Clarke was now armed with an armguard, an old smelly thing he borrowed from Chris Rogers. Between Kyle Abbott and Vernon Philander, South Africa managed to keep Clarke on 99 for 25 deliveries, 23 of those from Abbott. Between some superb leaves and stonewall defences, Clarke hardly flinched and brought up his ton with a scrumptious drive. The hundred meant that every time Clarke went past 30 in his last 20 innings, he has gone on to score 100.

What about subs in cricket?

Dale Steyn sustained a hamstring injury while bowling in the third Test. Wayne Parnell injured himself in the second. Ryan McLaren was knocked out by a bouncer in the first Test. Injuries in cricket happen all the time and more often than not, they diminish the contest when they are severe enough to fell a player and put him out of action. The debate has been had over and over again: how on earth can a game that is played over five days not allowed controlled substitutions? We’re not talking a sub for an under-performing player here, that would challenge the traditions of the game far too much to ever get past its law-makers. But if cricket has been bold enough to adapt in other aspects, with review systems, powerplays and such, why not try to better the landscape by allowing for something as logical as subs? Sure, luck plays its part in sport and some might say debilitating injury to an opponent is all part of Lady Luck showing up, but when the result of a game is influenced by the well-being of the opposition, surely victory can’t taste completely sweet?

The rarity of a really poor Vernon Philander outing

Since making his debut in 2011, Vernon Philander has had a pretty illustrious career. He has effectively bowled line-and-length to subdue batting attacks and become the leader of the South African attack. His average is below 20.00 and his economy rate 2.81 and even on flatter decks, he has showed that he can still take wickets and keep the run-rate down. In this Test, he has already conceded over 90 runs in an innings and it’s only the second time in his entire career that it’s happened. The previous occasion was at Brisbane in 2013 when he finished with figures of 30-3-103-0, meaning his current figures are the highest for any innings in his entire Test career. It is rare that Philander takes such a pasting and when he does, there are usually other bowlers to back him up, so without a frontline bowler and a real spin option, South Africa’s bowling attack looks in dire straits.

Michael Clarke gave nothing away with regards to when Australia might declare, but the rain might have been in South Africa’s favour just a little. Clarke’s plan was, most likely, to tire South Africa out and keep them in the field as long as possible. The ten minute changeover is one of the worst things for teams to deal with and Graeme Smith has previously said it’s one of the things he least likes as a batsman – which is why he quite likes doing it as captain. If the weather had stayed away, Clarke might have kept South Africa in the field until an hour before stumps. Australia could very well still spend the morning session batting, since the forecast for the next few days looks just fine. How the Australians time their declaration will be interesting to see. Since Australia aren’t really a team for enforcing follow-ons, it’s unlikely that the visitors are searching for enough runs to bat just once, perhaps just enough runs to completely remove the possibility of a South African win out of the equation.

The return of Shane Watson

Australia made two changes for the deciding Test with James Pattinson coming in for Peter Siddle and Shane Watson for Shaun Marsh. Siddle was told he needs to bowl faster if he wants to play while Marsh wasn’t quite good enough and Watson offers an extra bowling option. Watson has had an underwhelming Test career with the bat and being moved up and down the order hasn’t helped his cause. On Sunday, Watson played a nifty little cameo as Australia started to pick up the pace to notch up the declaration. Graeme Smith persisted with his spinners and Watson obliged, whacking a quick 40 off 32 before he mis-hit the ball to long-off. It wasn’t exactly the kind of innings that will get him selected as a batsman, but it was a handy contribution in the overall context. All eyes will now be on his bowling performance. DM