Profit in paradox: Why Dangote’s new oil refinery makes sense for him, and Nigeria 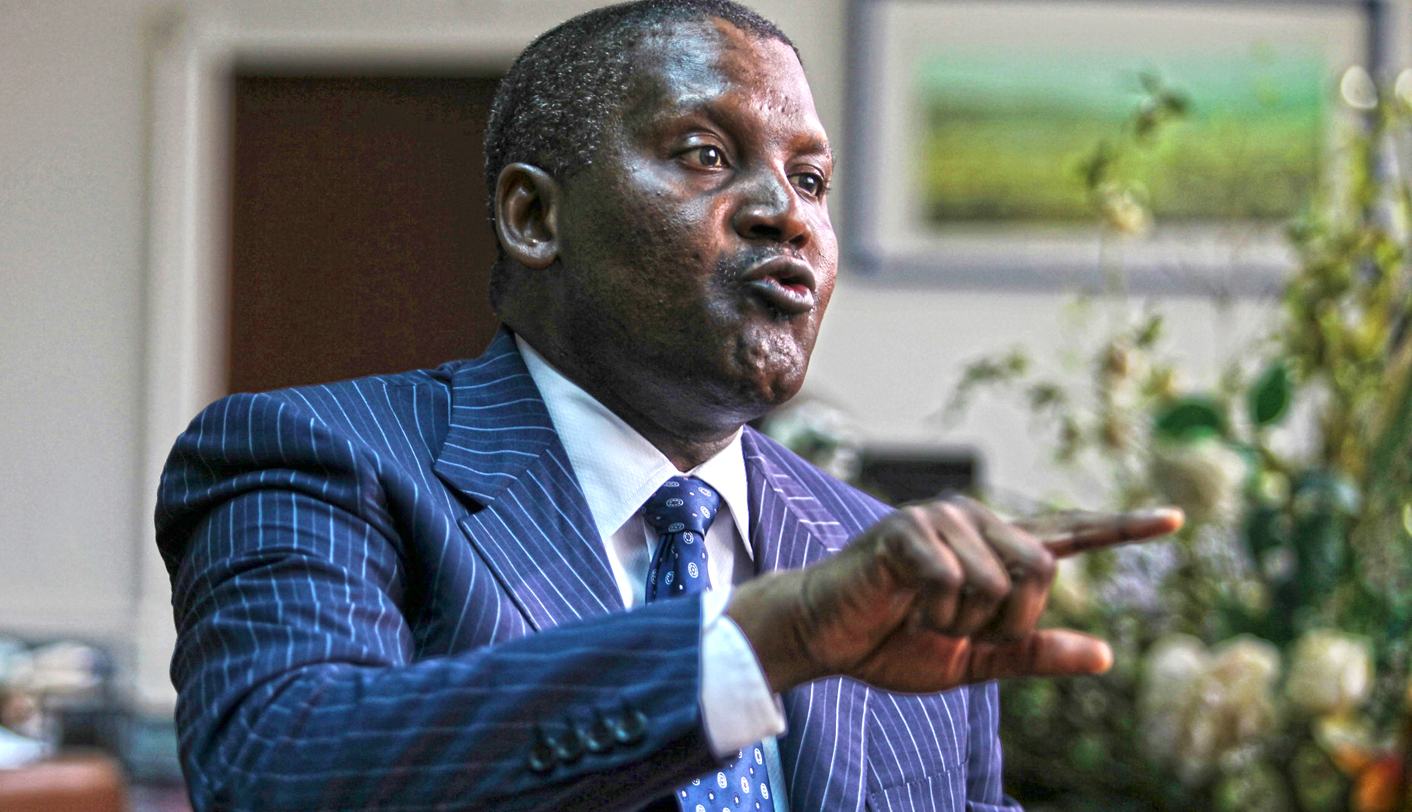 There aren’t many people who can raise enough money to build a $9 billion oil refinery in Nigeria. Fortunately, Aliko Dangote is one of them. His new project, when it gets off the ground, could revolutionise the Nigerian economy – and, for the first time, allow oil-rich Nigeria to stop importing all its petrol. By SIMON ALLISON.

Nigeria’s oil paradox is one familiar to many African countries, where an abundance of resources often swamps the ability to use these natural gifts effectively. Nations may have massive supplies of oil, iron or gold, but lack the infrastructure and industrial know-how to process or refine these resources. Out go the raw and rough commodities, loaded onto tankers, trucks and planes and exported to far-away shores; in come the refined and finished products—petrol, automobiles and jewellery—imported at a hefty premium.

In Nigeria, Africa’s largest oil producer, this paradox is especially pronounced. Nigeria has copious amounts of crude oil. According to the latest available data from OPEC, it produced 1.95m barrels a day (b/d) in 2012, still far less than Saudi Arabia, the world’s largest producer, which pumps out 11.7m b/d. Angola is Africa’s second-largest producer, with 1.5m b/d.

Despite the overflowing crude, Nigeria is also the second-largest importer of refined petroleum products in Africa, behind only South Africa, which has little oil or natural gas of its own. Every day on average 350,700 barrels of gasoline, diesel and related products are shipped in to Nigeria, according to OPEC figures.

This is an expensive paradox. By the time transport and external refinery costs are counted, the Nigerian government spends hundreds of billions of naira in subsidies to keep prices at the pumps reasonable. It was 888 billion naira ($5.5 billion) in 2012. This year the federal government has budgeted 971 billion naira ($6 billion). Concerned that this kind of spending is unsustainable, the government has occasionally flirted with decreasing the subsidy or removing it entirely. These plans, however, remain enormously unpopular among Nigerians, who see relatively cheap petrol as the major benefit of living in an oil-producing country. Who can blame them? There is little else to show for all that oil wealth. After the subsidy was suspended in January 2013, mass protests around Nigeria forced the government to reinstate it.

The obvious solution is for Nigeria to refine its own crude oil. Stripped of transport costs and import duties, the petrol price would surely decrease, allowing government to eventually remove the subsidy altogether.

The Nigerian government has tried this solution too. It failed, miserably. With all systems go, the three refineries owned and operated by the state in southern Nigeria’s Port Harcourt and Warri, and Kaduna in the north-west, could be refining 445,000 b/d, which is more than enough to cover Nigeria’s daily needs. It would even allow the country to enter the lucrative business of exporting refined petroleum.

This capacity, however, exists only on paper. In practice, a nasty combination of corruption, bureaucracy, inefficiency and chronic disrepair has left the various state-owned refineries operating at just 18% capacity— hence the shortfall that must be made up by imports.

Fortunately for Nigeria, this absurd situation could be about to change, thanks to Africa’s richest man, 56-year-old Nigerian businessman Aliko Dangote. With his sprawling concrete and construction empire, Dangote knows better than most that there is profit to be found in paradox. Moreover, he holds the skills, assets and reputation to make it happen. Dangote announced plans in April 2013 to build a new oil refinery in the Olokola Liquefied Natural Gas Free Trade Zone on the Gulf of Guinea coast near Lagos. The refinery, which Dangote hopes to complete by 2016, will cost an estimated $9 billion and produce around 400,000 b/d of petroleum products, comfortably meeting Nigeria’s total demand. At the same time, it will “change the economic and industrial landscape of Nigeria”, according to Doyin Okupe, a special assistant to Nigerian President Goodluck Jonathan.

This $9 billion price tag is a huge amount of money for anybody, but Dangote can afford it. The latest Forbes Africa Rich List values his estate at a tidy $20.8 billion, nearly three times larger than that of South African luxury goods mogul Johann Rupert, who is second on the list. Dangote has already pledged $3.5 billion of his Dangote Group equity to the project. Of course, he will not pay the entire sum: his company has already announced a $3.3 billion financing agreement with a syndicate of Nigerian and international banks, led by the UK’s Standard Chartered and Nigeria’s Guaranty Trust. The remainder will be raised later.

This loan is significant beyond its monetary value. Giant industrial projects in Africa struggle to attract funding, with foreign investors historically shy of uncertain political climates and unconvinced by Africa’s potential for profit. That international banks are prepared to invest billions of dollars in a complex, long-term project is a positive change and a strong symbol of confidence in the continent’s future and Nigeria’s in particular.

In addition, this confidence has the potential to be self-fulfilling. By eventually lowering fuel costs, Dangote’s new refinery will make it cheaper to do business in Nigeria and free up government funds for other development and infrastructure projects. It will also create 85,000 direct and indirect jobs for Nigerians, Mr Dangote claimed in an interview last September.

Given Dangote’s track record, any profit the plant makes is likely to be re-invested in Nigeria. This should speed up Nigeria’s economic expansion, which continues to be impressive despite the army’s ongoing and violent confrontation with Islamist militant group Boko Haram in the north. As Africa’s second-largest economy (expected to become its largest in early 2014 when the National Bureau of Statistics releases re- based GDP figures), Nigeria’s economic growth will fuel the continent’s progress.

The refining process will yield further tangible and lucrative benefits useful for making other sellable goods. The industrial complex housing the refinery will include plants to produce agricultural fertilisers and polypropylene, used to make plastics. Fertiliser will be a major money maker for Dangote and Nigeria. His project is expected to produce 2.75m metric tonnes of urea and ammonia for the agriculture sector every year. “We’ll also see Nigeria for the first time exporting fertiliser rather than using hard-earned foreign exchange to import fertiliser,” Dangote said.

Despite these ringing expectations, a few notes of caution remain. First, refining oil is a notoriously difficult process. Crude oil has to be heated to extreme temperatures until it vaporises and loses its chemical structure, turning into various hydrocarbon gases. These gases are pumped through a special tower. As they rise to the top, they start cooling. As they cool, each condenses at a different temperature corresponding to a specific height. The liquid is then collected and siphoned off. Some of these liquids will be ready for public consumption. Others need to go through additional, even more complex procedures before they become useful.

Plenty of room for error resides in all this complexity. Dangote’s refinery will not be immune to the problems that have plagued Nigeria’s existing refineries. It will probably be many years before it is operating at full capacity.

The pricing issue is another potential problem. In the early stages of production, massive start-up costs will prevent the new refinery’s petrol from being significantly cheaper than imports. It may even be more expensive. Reports are emerging that Dangote is looking for government subsidies to make sure his final product is competitive initially.

Given his close ties to the ruling People’s Democratic Party (PDP), and President Jonathan in particular, Dangote will probably get whatever he needs. Some argue that his proximity to government is an essential ingredient of his business success. So far Mr Jonathan’s administration has been effusive in its praise for the refinery project.

Voters, however, are expected to elect a new president in 2015. Thanks to a new opposition coalition, the PDP faces a genuine challenge to its rule for the first time since multiparty democracy resumed in 1999. Will a new administration, if there is one, be as supportive when it comes to financial incentives and in granting the all-important operating permits, without which the refinery would lie dormant?

Dangote has already made his bet and placed his money on the table. Either way, it is not a particularly risky gamble. Even Nigerian politicians, not always known for their foresight, would have a hard time arguing against this particular project for one simple reason: everyone—Dangote through immense profits, the Nigerian government through reduced subsidies, and the Nigerian people through eventually cheaper petrol and fertiliser—stands to benefit. DM

This article was originally published in Africa in Fact, a monthly magazine published by Good Governance Africa (GGA). GGA is a research and advocacy organisation that works to improve government performance on the continent.

Photo: Nigerian billionaire Aliko Dangote gestures during an interview with Reuters in his office in Lagos June 13, 2012. REUTERS/Akintunde Akinleye