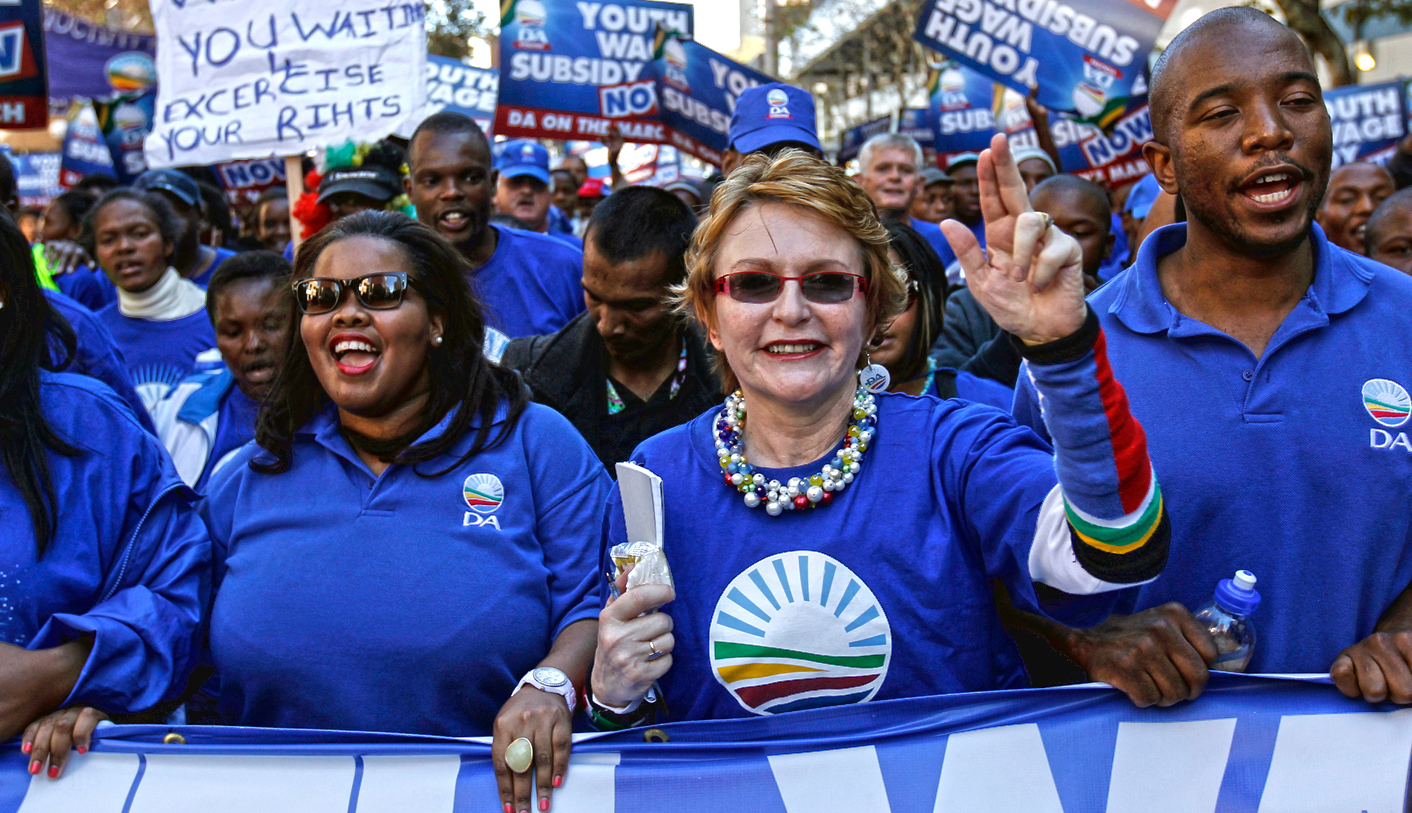 The last few weeks have seen the blue tide turn slightly against its leader, Helen Zille. As the face and the persona behind the Democratic Alliance, she was bound to be in some controversy or other. In a way, you could argue that that is her job. But recently, with the courtship, marriage and divorce with Mamphela Ramphele, and then the hugely publicised Twitter fight with City Press reporter Carien du Plessis, questions are now suddenly being asked about whether in fact Zille is the right person to lead the DA into this election. However, these questions are starting from the wrong place. And they don't even begin to answer the only question that would matter: what if Zille were suddenly no longer the leader of the DA? By STEPHEN GROOTES.

On Friday the Mail & Guardian splashed with a story about fissures emerging in the until-now rock-like support Zille has had in her party. With a litany of unnamed sources and questions about her future, and whether she was really the person to lead the DA in the year 2014, you would have been forgiven for thinking you were reading an everyday account of the ANC.

That this story has taken up so much national attention is a very real demonstration of the strength the DA has gained in the last few years. It’s now considered important enough to lead political newspapers, a space normally reserved for the ruling party and its many issues/problems/scandals. The DA is now a party that does actually set the agenda, in a way that it did not do before.

To a large extent, this is actually because of Helen Zille herself. It could be argued, quite strongly, that the DA would always have grown after she took over from Tony Leon in 2007, almost by default. (Just a few months after coming to power, the ANC elected Jacob Zuma at Polokwane and he was always going to push some voters the DA’s way.)

But that still required careful management. It still meant someone had to give those voters something to vote for. While it’s easy to carp from the sidelines about how the DA may still be “too shrill” or simply too oppositionist, and doesn’t speak directly to the unemployed rural poor of South Africa, the fact is, it is undeniable that the party has made a massive progress. Not just in voting numbers, but also in changing its identity. The idea of a DA event with a majority black participation, like its congress last year, or its Manifesto Launch in Limpopo just ten days ago, was rather unthinkable just five years ago.

When Leon resigned, the Business Day ran a cartoon with a series of steps leading from the DA’s then voting percentage, and ultimate victory. The middle steps were labelled “the hard part”. These last seven years has been the hard part. And while there is still plenty of hard part to come, the fact remains that progress has indeed been made.

But all of this can also be beside the point in one way, because it doesn’t answer the only question that matters in politics. If not Zille, then who  could possible take over?

This is the point where political hacks like myself make our usual, many times  repeated comments: Lindiwe Mazibuko is too young, so is Mmusi Maimane. They don’t necessarily have their own natural constituency. But the reason people like me make that kind of comment so often, is because it is true. There simply doesn’t appear to be anyone else in the party with their own natural constituency and respected by many, who also happened to be a national figure. To be blunt, the leaders in the party who are black are simply too inexperienced at this stage. And for the DA to elect an another white leader would be, well, suicide.

Which means there simply is not option at this point for Zille to resign. The party is, in a way, in slight cul-de-sac.

But that’s not actually a terrible place to be. Many of its members will simply accept this situation, and thus won’t push for change. Zille herself will be able to use this to bolster her own confidence that she can concentrate on national rather than internal politics.

And quite frankly, the stuff about Zille being a bad leader is overdone anyway. She is professional, capable, charming when she wants to be, and tough when she needs to be. And she has one asset that has protected her thus far, and will continue to protect her. She has found a way of properly consulting with her party before making major moves, but able to lead at the same time. That’s not as easy as it sounds when dealing with political egos.

If you go back to the Ramphele fiasco, she was asked directly if she would resign as a result of it. Her answer was that it had not been entirely her decision, and that the DA’s Federal Council had been aware of all the negotiations, and that she had not moved before she spoke to them first. In other words, it was not her decision alone. That simple fact is what protected her. Even if anyone wanted to move against her, they would presumably be a member of that Federal Council, and thus would have been involved in that decision process as well; they simply can’t use it against her.

All of that said, there does appear to have been a change of tone in Zille’s behaviour. And thus in the DA’s. It’s odd for this particular party to march in central Joburg, or to provoke confrontation in any way. And while the stresses of an election are beginning to show on all the parties and cause them to make strange decisions, (hell, Bantu Holomisa’s even accepting people from Cope!) it does seem as if the DA is going all out to provoke, a charge being led by Zille.

The answer may lie in a piece of thought from UCT politics professor Anthony Butler. He has suggested that if you look at the voting figures, and the strong possibility that millions of people simply will not vote, it may be in the ANC’s interests to keep those people at home on 7 May. He argues that because it has a machine that can get its known supporters to the polls, and as it may be worried those who are undecided may vote against it, it makes sense for the ANC to keep the poll down. In a low poll, the parties with the most votes benefit hugely anyway, as their voting shares get inflated. As a result, it’s in the ANC’s interests to keep voting figures down, by keeping this election as boring and uncontroversial as possible.

For the DA, of course, the opposite is true. The more it can create controversies, the more interesting the election, the more people will vote, and possibly against the ANC.

This might explain what appears to be a huge change of tone within the DA and therefore Zille.

That said, the temptation to provoke for the sake of provoking is dangerous. And so is your leader getting a reputation for not being able to control her Twitter fingers. No leader can take themselves for granted. And Zille is no exception. DM

Grootes is the host of the Midday Report and senior political reporter for Eyewitness News. He’s also the author of SA Politics Unspun.

Photo: Helen Zille (C), gestures during a march in Johannesburg May 15, 2012. REUTERS/Siphiwe Sibeko