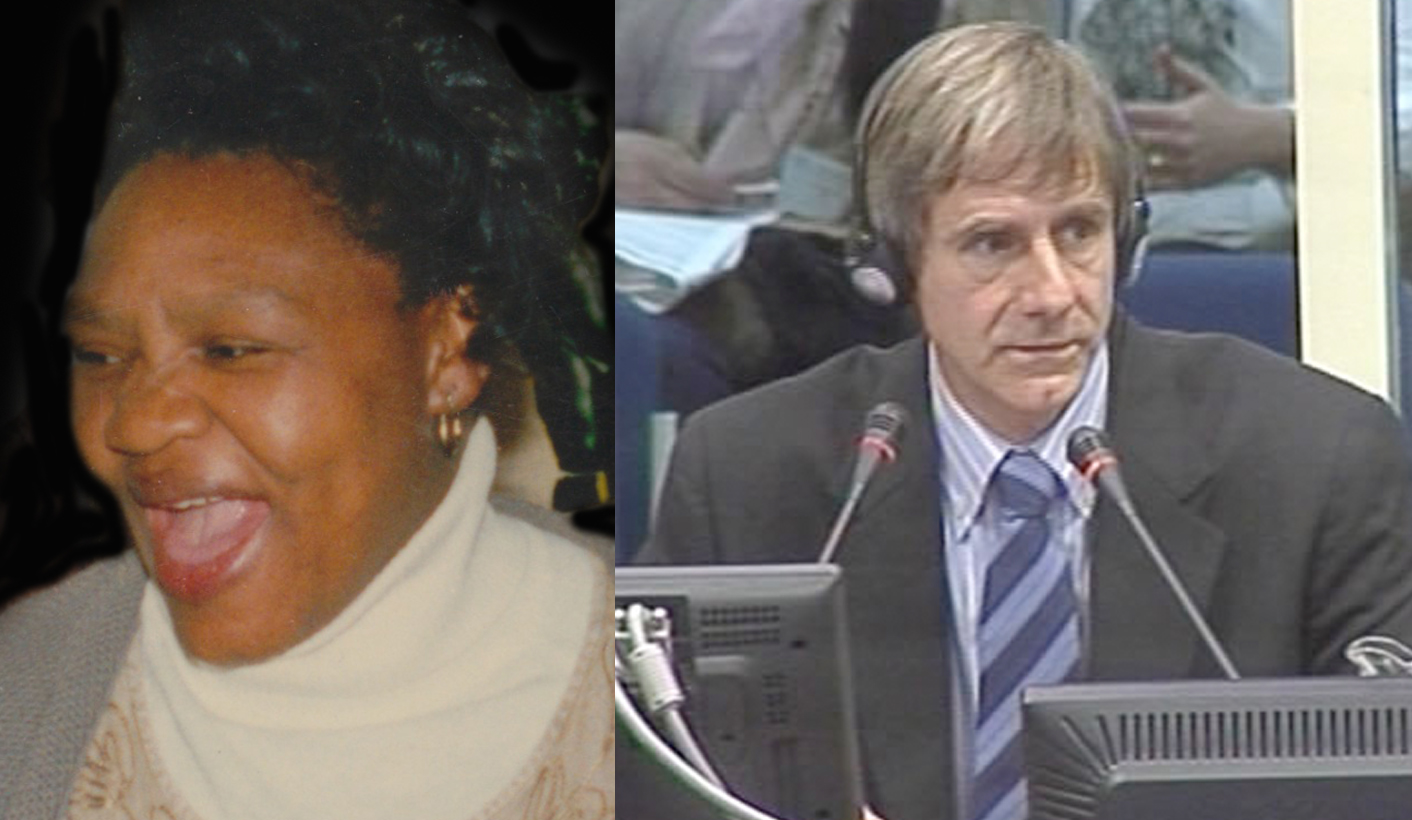 A substantial part of the Oscar Pistorius debate is about our justice system and whether the blade runner will get a fair trial. This week, away from the eyes of the world, a grandmaster of forensics – who has testified in war crimes tribunals at the Hague – gave evidence in the Betty Ketani murder trial. And, as ALEX ELISEEV reports, his verdict is that South Africa has a fair and mature legal system.

Dr. Thomas Parsons exists in a different realm to the rest of us. A different dimension. His mind crunches Bayesian calculations for breakfast and terms like “polymerase chain reaction” and “capillary electropherogram” slide off his tongue like names of rugby or cricket players. He has a PHD in molecular biology and specialises in ancient DNA and population genetics. His CV is over 20 pages long and just looking at him can make you feel like you’re been wasting whatever intellect you were lucky enough to win at the IQ lottery.

Parsons is a thin man, with neat white hair and an American twang. When testifying, he never rushes to an answer, processing every word like a super-computer. He never simply agrees with a statement and often asks for it to be repeated or for more time to read a document. To make him say something dramatic or sensational would probably require a tsunami- or a rapture-sized event. He’s friendly and approachable, but is better built for a laboratory than an interaction with a journalist who got a “C” for high school biology.

Parsons flew to South Africa on invitation by the South African police. Although he lives in Washington DC, he’s the forensic director of the International Commission on Missing Persons (ICMP) in Sarajevo, Bosnia & Herzegovina. There, he leads a team of around 85 scientists who wash, bleach, crush and test bones from the world’s great genocides or natural disasters.

The ICMP is a world leader in extracting DNA samples from old, degraded bones. Sometimes, they have little more to work with than splinters or shards. And so, the police sent them three out of six tiny bones which were discovered in a shallow grave in Johannesburg in March 2012. (South African laboratories didn’t have the equipment and skills required for the job, given that Betty Ketani was killed and buried fifteen years ago.)

The ICMP was also sent DNA samples from Ketani’s three children and asked to match them to the DNA locked inside the bones. These bones were old and fragile and most likely came from the hands and feet. It was a big ask and, in the end, only one of the three bones had enough DNA inside to run tests.

On Wednesday and Thursday, Parsons spent a day and a half on the witness stand at the Palm Ridge court defending the results which emerged. The ICMP found that the chances of the bones belonging to Betty Ketani are 4740 times more likely than not. This is done by comparing two hypotheses: A: The bones are hers and B: the bones are not.

Working with that figure, Parsons ran some spontaneous calculations and concluded that the probability of a match is as high as 99.98%. This is where it gets complicated because to arrive at that figure, one has to consider prior probability. In simple terms, what you feed into the calculation machine is very important. To get to the 99.98%, Parsons considered that there was a 50/50 chance that the bones were Ketani’s, given that there was already suspicion that that was the case. You drop that to a 10% prior probability, and the number drops to 99.81%. The smaller the prior probability (the population of South Africa or even the world) the smaller, or weaker the end result.

Defence advocate Laurence Hodes launched a fierce cross-examination, trying to prove a break in the chain of evidence and to show that the DNA results were neither accurate nor reliable enough to be used in a criminal trial. He had done his homework and had consulted with his own forensics specialist.

Often there were sparks of tension as the battle of the brains – legal versus scientific – played out inside a quiet courtroom. Parsons raised his voice only once, saying: “I object, sir, to your characterisation that I have attempted to mislead this court in any way and overemphasize the strength of this evidence.”

Hodes fired back: “You may object sir, but I can assure you I’m not done…”

At one point Hodes had to cut Parsons off and remind him: “I ask the questions here, sir”.

Watching the two men cross swords was a thing of beauty. It was Shakespearean. Hodes tried to inflict a thousand little cuts while challenging the overall results. Parsons stood firm, his experience and knowledge serving as a shield made of stone.

When Hodes pushed the line that the bones were contaminated before they reached the ICMP, Parsons fought back, saying that the decontamination process was so thorough that only the DNA locked deep inside the bones mattered.

“This (bone) could have been found on the side of the road, carried there by a blackbird,” he testified. “I don’t see chain of custody affecting anything I would report on here.”

Parsons also raised an important question about how a “sample switch” could ever have taken place, given the results matched those of Ketani’s children?

Hodes came at Parsons with academic articles from around the world and documents published by the FBI. He questioned the science and the degree of certainty given the partial results produced. The argument was that the threshold of certainty had not been reached because there was little DNA to test and far too few loci (markers) had been matched.

Parson’s colleague from the ICMP, Ana Bilic, was up next. She is the quality controller at the centre and signed off on the results. Her cross-examination was about every minute detail, from a barcode on a test tube to what protective clothing lab staff wear; from the colour of an envelope to a typographical error in a date. Hodes patiently took her through an almost 300 page long document. The time Bilic spent on the stand should keep police officers and forensics analysts awake at night. One small mistake, one incorrect log, one forgotten photograph can be a feast for a sharp lawyer.

The chain of custody kept by the ICMP is almost insane in it’s efficiency. It’s not likely that Hodes did any real damage to this aspect. He can, and will, challenge the findings and the chain of custody in South Africa but both Parsons and Bilic were strong witnesses who came across as absolute impartial experts with no motive to lie or exaggerate.

Afterwards, the ever-pragmatic Parsons spoke about the grueling cross-examination from Hodes, who he clearly respects.

“I seriously feel like that process was a credit to the legal system,” he said. “This is how it’s supposed to work. We have very, very strong evidence, but in order for the evidence to stand up it had to have been done correctly and must be able to stand the kind of scrutiny that was applied here. This was a degree of fairness one would expect in a mature legal justice system.”

He added: “It was a very interesting, somewhat challenging and ultimately edifying experience to be part of the South African justice system.”

This was Parson’s first time in South Africa. Asked how the legal process compared to that at the Hague (Parsons testified in a special tribunal set up for the former Yugoslavia) this is what he had to say:

“I found the experience really quite similar. The issues in the Hague criminal tribunals are larger from the standpoint of politics and society perhaps, but again it all revolves back to scientific procedures. So in many respects it was similar, with equal degree of rigor.”

The Pistorius trial is not an accurate representation of how regular trials run in South Africa, especially not at the lower courts. As professor Anton Harber put it, it is a window into a rich man’s justice. But if Parson’s measured words are anything to go by, the Pistorius trial may have a few extra bells and whistles, but it will represent a system which is, mostly, fair and mature. DM

Alex Eliseev is an Eyewitness News reporter. Follow him at: @alexeliseev

To read more about the Betty Ketani murder, go to: www.alexeliseev.co.za