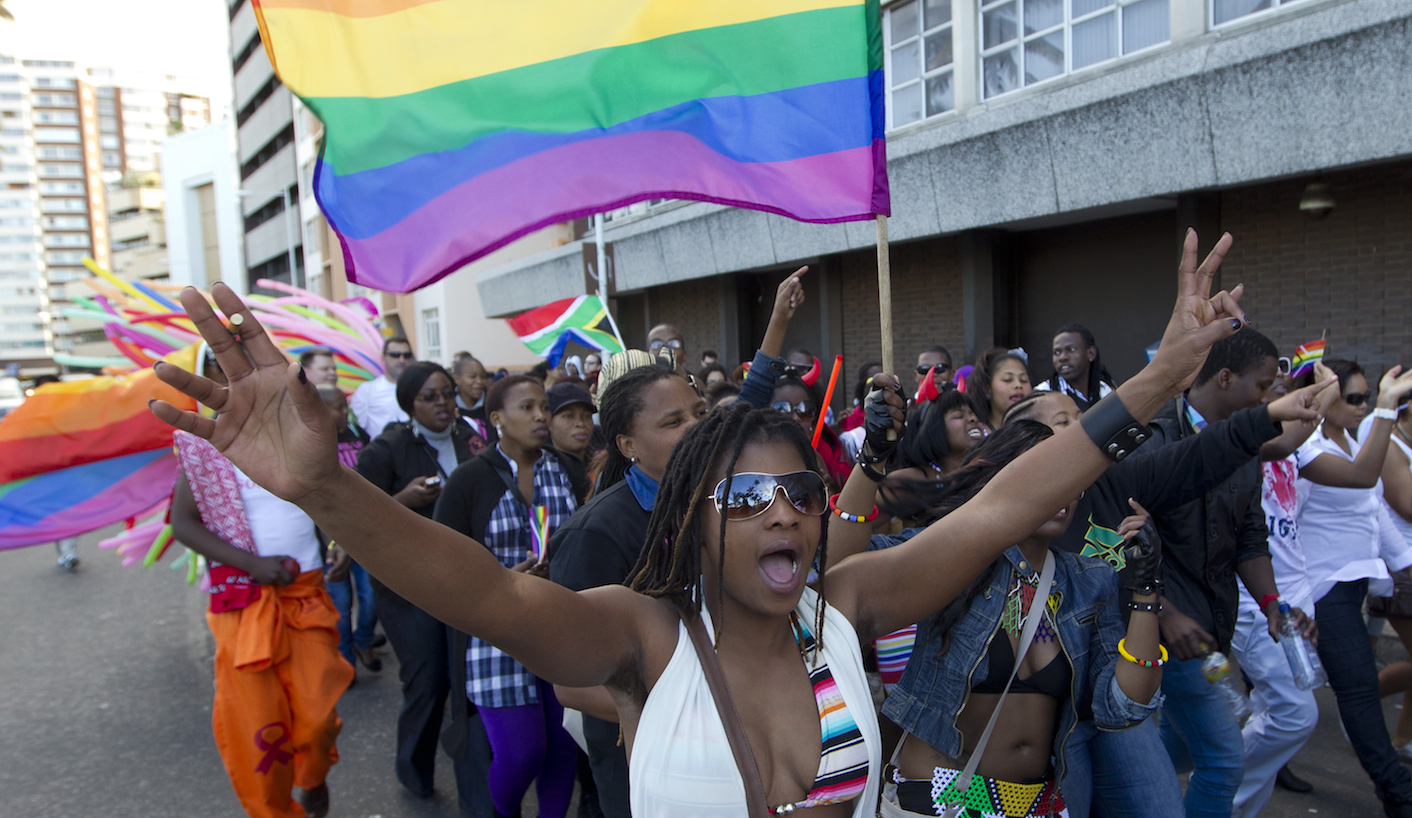 Cape Town Pride 2014 (CTP) takes place from 21 February to 1 March. The annual festival aims to celebrate gay rights in South Africa. This year’s theme is “uniting cultures in Cape Town”. However, people from communities around Cape Town have said that they feel CTP excludes them and the serious issues affecting them as gay people.

CTP is known for its flamboyant floats, music and parties. But Free Gender, an organisation of black lesbians, sounded a less festive note yesterday when it announced that it would be suspending its participation in CTP this week.

Funeka Soldaat, a founding member of Free Gender, said that they would wait until the Cape Town Pride Annual General Meeting where LGBTI individuals and organisations will discuss a strategy for moving Cape Town Pride forward. Free Gender campaigns for gay rights in Khayelitsha. Members meet every month with the police to discuss matters concerning the community and the police.

Funeka said that Free Gender will propose that there should be one committee that must plan Pride events throughout Cape Town, including areas like Nyanga, Mitchell’s Plain, Gugulethu and Khayelitsha. She also said that they want CTP to be more representative. It should have more women and more people from poor, working-class, or informal areas.

Matthew van As, the director of Cape Town Pride, said that people are wrong to say that Pride only represents rich, white gay men in Cape Town and that they have “imposed this perception on themselves.” He said that Pride is open to everyone and does not discriminate. For example, he said that Pride pays to transport members of community organisations to attend Pride in Green Point, the affluent Cape Town suburb. Genevieve le Coq, one of the CTP volunteers, also participated in the interview with Van As.

Van As acknowledges that there are “differences in circumstances” between the gay communities in Cape Town’s more affluent suburbs and its working-class communities. However, he says this is an “us and us situation” and that we must “celebrate the freedom that we have but remember we still have far to go.”

Gay men and women who live in Green Point, Khayelitsha, and other townships and informal settlements outside the CBD experience violent hate crimes and violations of their rights. Zoliswa Nkonyana is briefly mentioned on the CTP website. Nkonyana was 19 years old when she was brutally raped and murdered just a few metres outside her house in Khayelitsha for being lesbian. Her case took years of processing through Khayelitsha’s criminal justice system before a verdict was reached.

Van As says that Pride can only do so much to sensitise people to the status of gay rights in other parts of Cape Town. He says, “We each have to stand up for ourselves so that we can stand together as a united front.”

CTP has organised a series of 12 parties and events for the week, including “Mr Cape Town Pride Manhunt” and “Ms Butch and Ms Femme” beauty pageants. It also organised a forum and a panel discussion to address more pressing matters affecting gay people. However, both events have now been cancelled or postponed.

Soldaat denied that LGBTI people in Cape Town were apathetic about the serious side of gay rights. She said that people were very keen to participate in such events. She mentioned the Constitutional Workshop to discuss important technical matters relating to CTP and the organisations it works with.

Funeka is a ‘corrective’ rape survivor. She was raped by a group of young men because she is a lesbian. She recently testified at the Commission of Inquiry into the breakdown of policing in Khayelitsha. She spoke about her experiences with the police and cited examples of inefficient and homophobic reactions by the police.

A separate march called Kumbulani Pride (KP) will take place in an unnamed informal settlement. This is partially funded and facilitated by CTP and is listed on the CTP website. According to the website, the Kumbalani Pride march aims to raise community awareness and bring visibility of a “united LGBTI community”. However, the website does not list any details as to where and when the march will take place. It is also listed separately from the main events and fringe events pages.

Mabuti Mkangeli from Triangle Project says that KP aims to “mourn the loss of those who have died for their sexual orientation and to send a message to the community that we are human beings with the same rights”.

Soldaat said that the CTP listed KP on their website without properly consulting the other partners. She says that it makes KP seem like a CTP project when it was actually developed by a number of other community organisations, of which CTP is a member. Mkangeli made similar comments.

Both Triangle Project and Free Gender are KP committee organisations.

Van As said that CTP tries to reach out to working-class communities by sending emails, for example, but that they often receive no response. They felt that this did not have to do with differential access to resources of different communities. Mkangeli says that CTP does not regularly participate in weekly community outreach meetings.

Mkangeli feels that CTP must send a strong message out to people in town about the hate crimes taking place against gay people in working-class communities. We asked Van As and Le Coq whether CTP, as an institution, would be willing to make a public dedication at the main Pride march in the memory of people such as Zoliswa Nkonyana, Paul Semugoma and Paul Kasonkomona, who have been persecuted for supporting gay rights to raise awareness of the situation of various gay communities across Africa.

Van As and Le Coq said that CTP would consider it, but they raised concerns about whether CTP was an appropriate platform for such “emotionally charged” issues. Matthew said that CTP intended “to have a moment of silence for all that have been affected by homophobia in South Africa.” He also suggested that CTP could not force the gay community to hear something that they may not be ready to hear.

Free Gender, PASSOP and the Treatment Action Campaign will host a separate dialogue on 1 March 2014 to respond to homophobia being experienced on the African continent. It will take place at 6 Spin Street at 2pm. DM

Photo: A woman holds her hands up during the Durban Pride a few years ago (REUTERS/Rogan Ward)