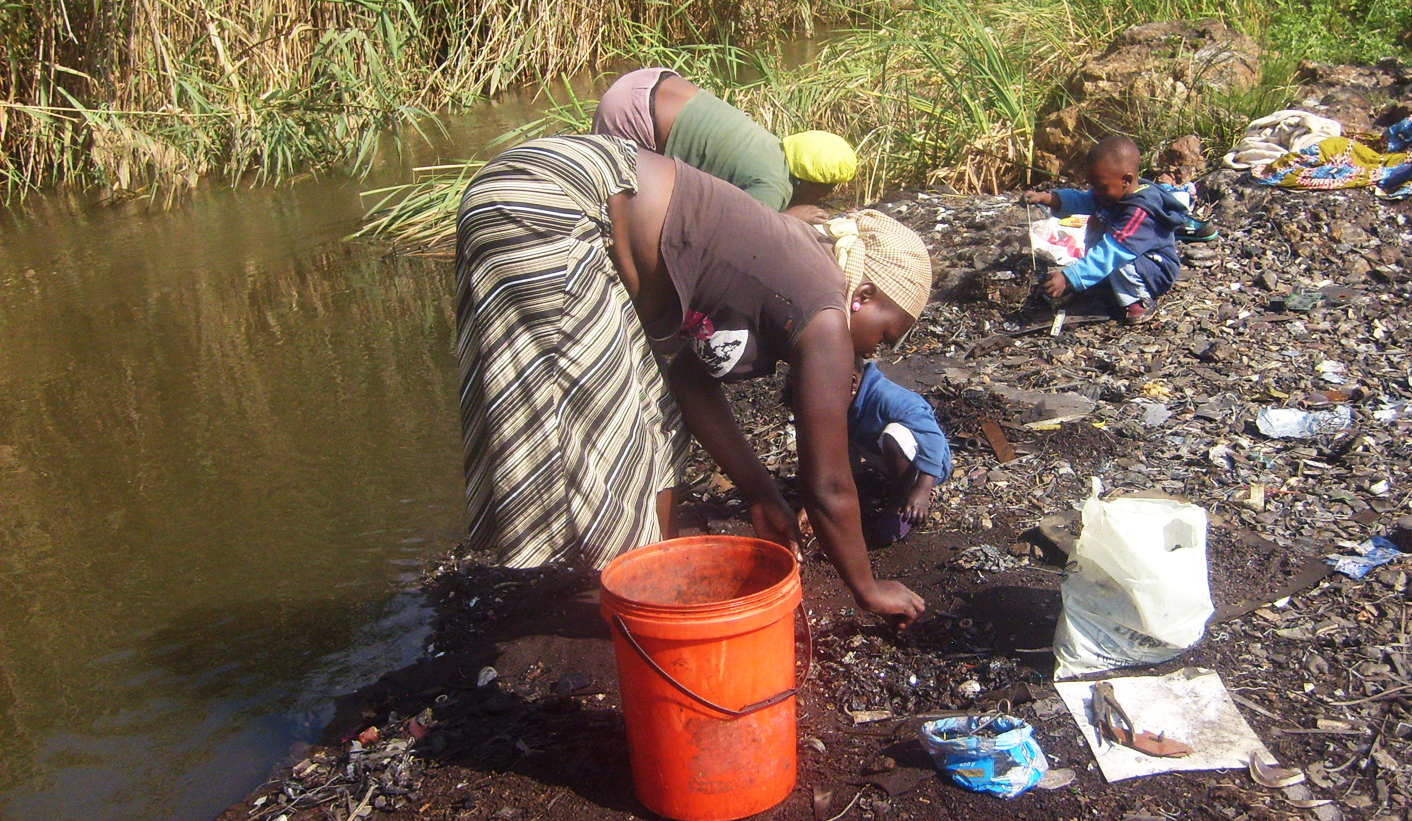 On Tuesday, reports emerged that the bodies of five more illegal miners had been discovered near a shaft in Roodepoort. This only a week after the rescue of over a dozen who had been trapped underground. While not as dangerous but certainly still illegal, a different type of Zama Zama scours the banks of the Klipspruit River that cuts through southern Soweto. Every day groups of desperate women and men head off in search of small treasures that will bring in enough money for a day’s food. By BHEKI SIMELANE.

The high unemployment rate has inspired South Africans to find innovative ways of making ends meet. There are children to be fed, clothed, housed and educated, which is what drives the Zama Zamas, some of them women, who I have come across panning the Klipspruit River for odd pieces of copper to sell to local scrap yards.

Work here begins as early as 6am and usually a few of the diggers would have found enough to provide at least a meal at the end of the day.

The process of collecting, cleaning and selling the copper is certainly not easy. It is long and laborious, hard work that takes many of the young women with children away from their homes for far too long.

Which is why 27-year-old Nyiko Maluleka brings her three-year-old daughter down to the dirty river with her. Maluleka, originally from Giyani in Limpopo, said she leaves home in Soweto every morning at 7am.

“I only return about 2:00 pm, so I spend about seven hours here and that is why I bring my kid along so she does not starve all alone at home,” she said.

A quick look around, however, suggested that there was very little food in sight. All I could spot was two-litre bottle of water and little else, which suggested that the only time the child could have eaten was before they had left home that morning.

The riverbed where Maluleka and the other Zama Zamas scour for copper is covered in a thick, black, oily substance. Small pieces of copper gleam from this blackness. Maluleka’s hands are covered in oil as she digs out these small pieces from the river using a 2o litre bucket. She scoops the sludge from the water and pours it out onto the riverbank. Afterwards she kneads, squeezes and prods it while rinsing the mixture with more water, at which point the pieces of sharp copper are revealed. Maluleka then gathers up the shards and scatters them to dry in the sun. Collectors prefer hot, sunny weather as rain prevents them from drying out their copper.

Once they are dry, she places the small pieces of copper into a plastic bag and repeats the procedure until she’s satisfied with the day’s work. I watched as her daughter play some distance from the river, but I couldn’t help wondering whether it was safe for the small child to be near the water and exposed to the black sludge. Anything could happen as the women bent over the water absorbed in their work.

Once back home, Maluleka said she went about processing the copper she had retrieved from the river. She would do this by burning the plastic bag over a car tyre, which she claimed burned at the required temperature. At the end of the day, all that remains are clean pieces of copper that she repackages and takes to the scrap yard, where it is weighed and paid for.

An entire day’s labour will yield about 2kg of copper, which brings in about R40, just enough for some food.

Work at the Klipspruit River is competitive, and it is not easy, Maluleka says, to collect more than 2kg, some collectors move to other sections of the river.

The copper collectors were reluctant or unable to explain where the copper pieces came from or how they found their way to the river.

One is left to assume that it washes down the river from some industry or factory. Later, however, I met an elderly man known only by his second name of Mabunda.

Mabunda drives a white bakkie that is available for hire around these parts and says the bits of copper that collectors like Maluleka draw from the river have been washed down by groups of men who arrive with bakkieloads of copper that they clean further up the spruit.

“I would call it a form of unique trade that caters for people in accordance with their financial standing,” said Mabunda. He said those who owned cars would be hired and that the ones below those would work tediously at the river each day just to make R40.

Mabunda said the copper came from “the engines of broken machines used in the mines”. He added that a white man had a connection at the mines and bought these engines in bulk, which he then sold off to people like him who had transport.

Calvin Hlongwani, a 22-year-old I encountered, said he had bought a 100-litre container of the copper mix for R1,500. He used the same process as Maluleka to extract the pieces of copper and claimed he had already managed to make R1,500, the price he had paid for the mixture. He was hoping, he said, to make another R5oo.

“Its a gamble, my brother, as profits are not guaranteed. This whole business of ours is a big gamble.” Hlongwani said he had often become ill and was certain this was because of the conditions of “my kind of business”. I was hardly surprised, as these men and women spend hours barefoot in filthy, unhygienic surroundings.

Another collector, Felix, said he had stopped panning for copper when he had become bedridden for several weeks and had lost a lot of weight. He said had he suffered from pneumonia and considered himself lucky to be alive after a few years of working as a Zama Zama.

Daily, more and more desperate young people join the existing Zama Zamas at the river, risking their lives and their health for a meagre handful of copper and the promise of a meal. The Klipspruit River flows on, and so does the people’s faith in its aid. DM

All photos by Bheki Simelane.