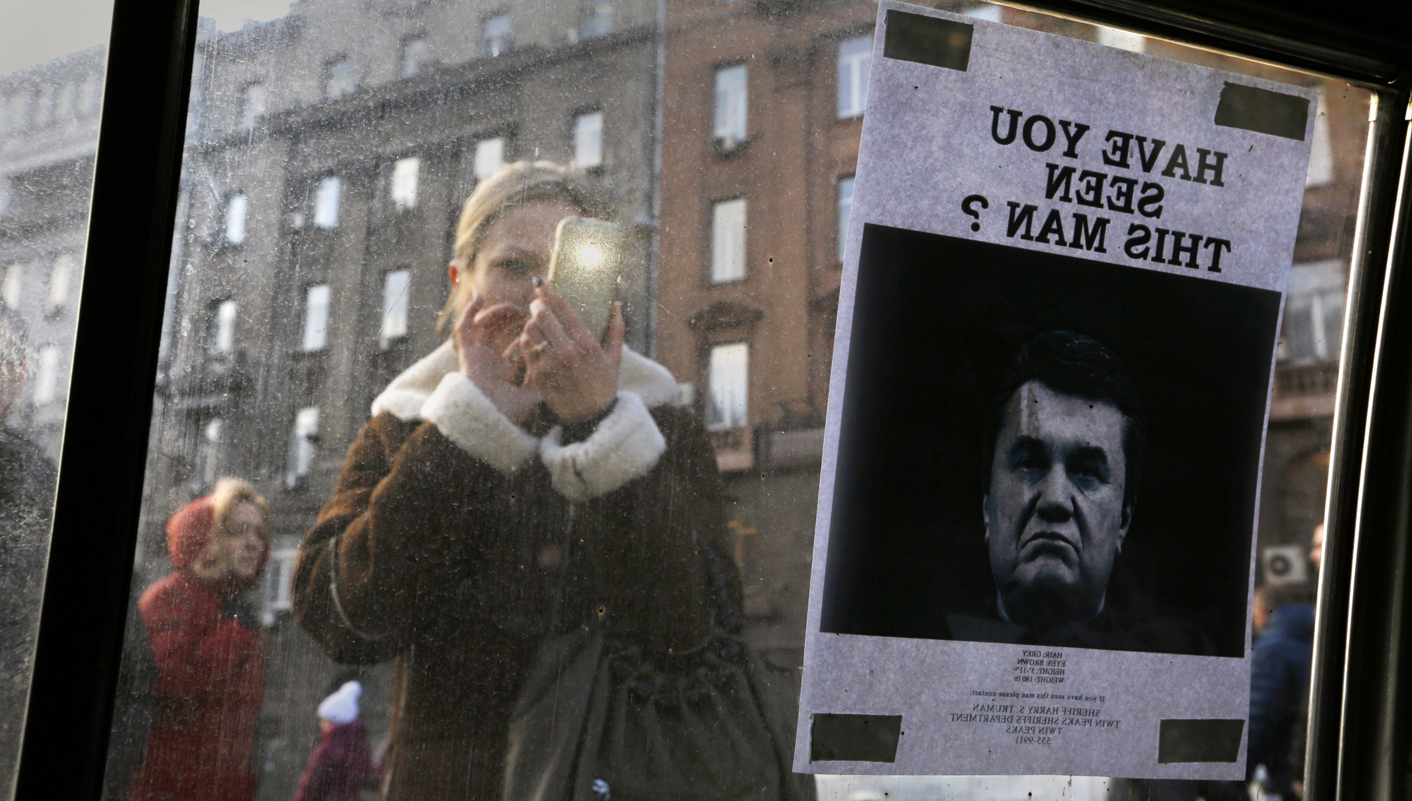 Ukraine's parliament voted on Tuesday to send fugitive President Viktor Yanukovich to the International Criminal Court, while his acting successor expressed concern about "signs of separatism" in Russian-speaking Crimea. By Timothy Heritage and Natalia Zinets.

A resolution, overwhelmingly supported by parliament, linked Yanukovich, who was ousted by the legislature on Saturday and is now on the run, to police violence against protesters which it said had led to the deaths of more than 100 citizens of Ukraine and other states.

The Hague-based court said it would need a request from the government of Ukraine giving it jurisdiction over the deaths.

With an early presidential election set for May 25, one of Ukraine’s most prominent opposition figures, retired world boxing champion Vitaly Klitschko, confirmed he would run.

Yanukovich was indicted by the new authorities for “mass murder” on Monday over the shooting of demonstrators in Kiev and is now on the wanted list, having last been seen at Balaclava in Crimea, near Russia’s Sevastopol naval base.

The resolution said former interior minister Vitaly Zakharchenko and former prosecutor-general Viktor Pshonka, who are also being sought by the authorities, should also be sent for trial at the ICC.

Ukraine never signed the treaty that created the ICC, which since its founding in 2002 has handled only cases from Africa. However, the court could intervene if Ukraine asked it to.

“A government can make a declaration accepting the court’s jurisdiction for past events,” said court spokesman Fadi El Abdallah, adding that it would then be up to the court’s prosecutor to decide whether or not to open an investigation.

The tribunal has jurisdiction over only serious international crimes, and then only if local authorities are unable or unwilling to deal with those cases themselves. Ukraine would not have any say over who might be investigated.

Yanukovich left Kiev by helicopter on Friday, heading for his power base in the east, where he was prevented from flying out of the country and then diverted south to Crimea.

Yanukovich’s fall has revived fears that the former Soviet state of 46 million might split along the faultline that divides its pro-Western and pro-Russian regions.

Acting president Oleksander Turchinov and security chiefs expressed concern at a meeting on Tuesday about threats to the country’s unity in mainly Russian-speaking Crimea. This followed protests on the southern peninsula against the leaders who have taken charge in Kiev.

“We discussed the question of not allowing any signs of separatism and threats to Ukraine’s territorial integrity and punishing people guilty of this,” Turchinov said in a statement, referring to pro-Russian protests in Crimea.

Some of the peninsula’s two million residents call openly for moves to secede from Ukraine. The size of Sicily or Massachusetts, Crimea was formally transferred from Russia to Ukraine in 1954, when both were part of the Soviet Union.

In a fresh warning to the European Union and United States not to try to shape Ukraine’s future, Russian Foreign Minister Sergei Lavrov said the country must not be forced to choose between Russia and the West.

Both Russia and the West, while competing for influence over Ukraine under its new rulers, have said publicly that they do not want a split to happen.

Moscow has said it will not deal with those who led an “armed mutiny” against Yanukovich, who was backed by Russia, and said it fears for the lives of its citizens, many of whom live in Crimea or the industrial cities of the east that helped vote Yanukovich into office in the 2010 presidential election.

“It is dangerous and counterproductive to try to force upon Ukraine a choice on the principle: ‘You are either with us or against us’,” Lavrov told a news conference in Moscow.

Both Russia and the West should use political contacts in Ukraine to calm the situation down and not seek advantage at a time when national dialogue is needed, Lavrov said.

Unrest erupted in Ukraine after Yanukovich abandoned a proposed trade pact with the EU in November and turned instead towards Moscow, which offered loans and cheaper gas supplies.

The EU’s foreign policy chief Catherine Ashton said Russia should behave like a good neighbour and let Ukraine move forward in the way it chooses after three months of conflict.

Ashton, the first senior foreign official to visit Kiev since the overthrow of Yanukovich, said the EU understood the need for strong links between Kiev and Moscow, but that a message should be sent about Ukraine’s territorial integrity.

Voicing “strong support” for Ukraine’s new leaders at a news conference, Ashton urged them to form an “inclusive” government and focus on getting the country through short-term problems. She gave no details of any foreign financial help, saying the EU would work with the International Monetary Fund, which would make its own assessment of the situation.

The finance ministry in Kiev has said the country needs $35 billion in foreign help over the next two years and that the money needs to start coming in the next week or two.

Ukraine’s hryvnia currency fell to record lows against the dollar on Tuesday while its dollar bonds tumbled as concerns grew about the ability of the country to pay its debts in the near-term.

“I launch from here an appeal to all our international partners, in particular Russia, to work constructively with us to guarantee a united Ukraine that can be a factor for stability in the European continent,” he said.

“The winds of change are knocking again at Ukraine’s doors; the will of the people must prevail.”

Ukraine’s parliament put off plans to vote on the formation of a national unity government until Thursday to allow consultations to continue.

On Independence Square, the crucible of the revolution, hundreds of people milled around showing no sign of ending the protest they hope will hold their new rulers to account.

Maria Meged, 25, a tourism manager from Kiev, came with her mother and father to lay a yellow tulip among the bouquets for the dead that snake in a line up the hill from the square.

“Those who died were our brothers,” she said. “This camp should stay until the old president is in prison and every part of the government has a new face.” DM

Photo: A woman takes photos of a “Wanted” notice for fugitive Ukrainian President Victor Yanukovich, plastered on the window of a car used as a barricade, near Kiev’s Independent Square February 24, 2014. Yanukovich, ousted after bloody street protests in which demonstrators were shot by police snipers, is wanted for mass murder, authorities announced on Monday. REUTERS/Yannis Behrakis