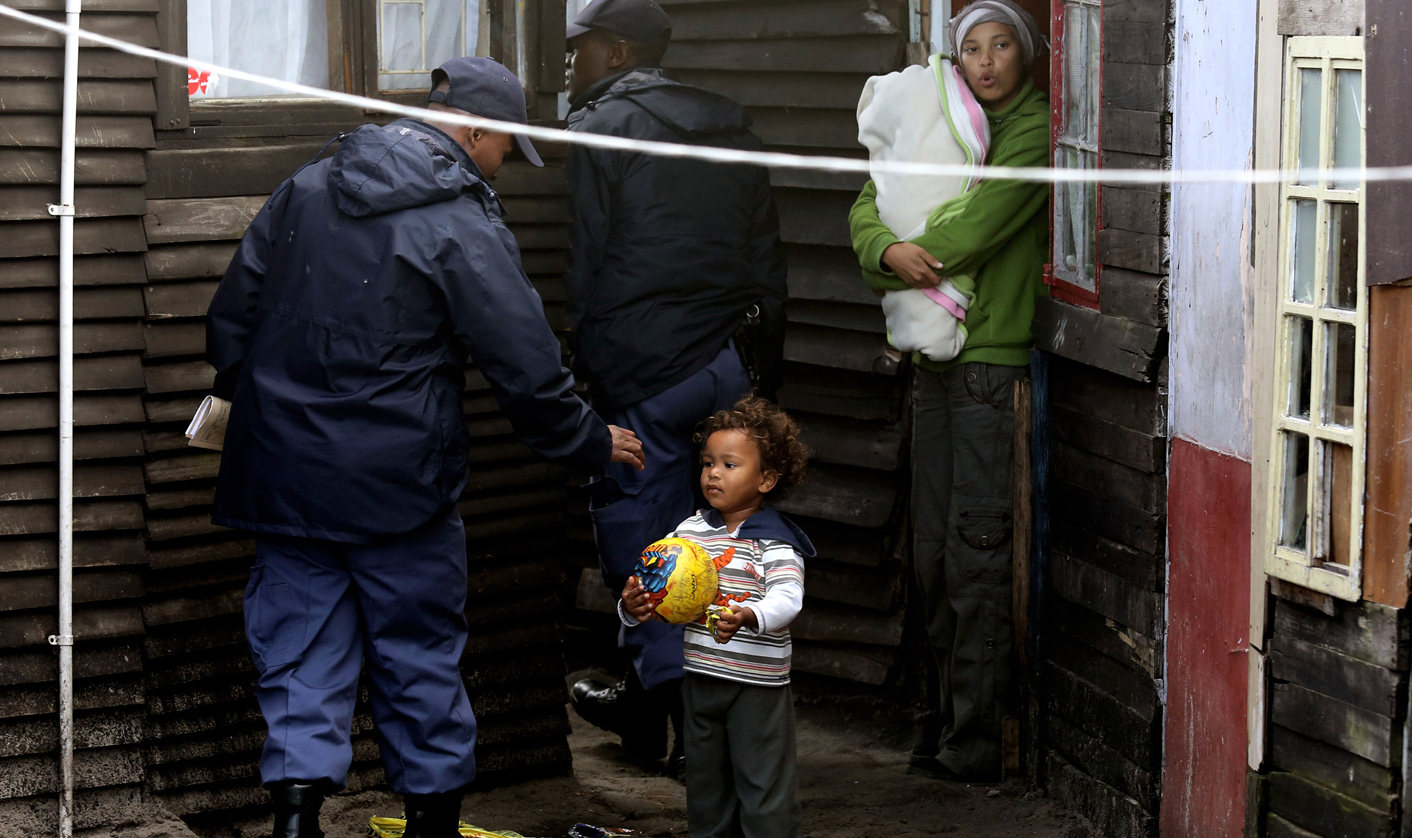 A policeman stops a child from entering a crime scene at a house where 24-year-old Yusuf Hector was shot dead in Manenberg on the Cape Flats, Thursday, 15 August, 2013. Nardus Engelbrecht/SAPA

Lesley Knight has been teaching at Edendale Primary School for 27 years. She has witnessed some of the worst incidents of gang violence in Manenberg. By Sibusiso Tshabalala for GROUNDUP.

“How can you teach or learn in these conditions? You’re constantly frightened and unsure of what might happen next,” says Knight. The school, which serves 400 pupils, is one of five schools that have experienced the recent spate of gang violence in Manenberg.

Last week Friday, the Cape Town High Court granted an interim order compelling the Western Cape Education Department to provide adequate security for teachers and learners at Edendale Primary and four other schools in Manenberg. The order comes after the Manenberg Teachers’ Steering Committee, represented by the Equal Education Law Centre, filed an urgent application to secure the safety of learners and teachers at the five schools.

In the founding affidavit submitted to the Cape Town High Court, Eugene Peters (Acting Principal of Red River Primary School) noted with disappointment at the unresponsiveness of the WCED. The Manenberg Teachers’ Steering committee sent a letter of demand to the District Director of the Metro Education District, the HOD of Education and the MEC.

They received no response.

The interim court order has come at an appropriate time for teachers like Knight and Peters. The five schools – Edendale Primary, Silverstream Secondary, Rio Grande Primary and Sonderend Primary School – are located in the middle of the gang turf war between the Hard Livings and Americans gangs. Gang violence often brings the community to a virtual standstill, traumatising both the learners and teachers.

After days of intense gang violence, the WCED refused to grant leave to the teachers at the affected schools.

“The WCED says the school principal cannot arbitrarily release us from our duties, even when we’re in distress,” says Knight.

On Sunday 24 February, the South African Police Service (SAPS) tabled a two-week safety plan for the five affected schools. The plan – which took effect yesterday – provides for the deployment of additional stationary police vehicles at the schools and increased police patrols.

“There was a strange calmness today. Many of the parents were hesitant to bring their kids to school. But some did, even though the kids arrived late. We felt safe,” says Knight.

According to the plan, the SAPS are required to patrol the area around the school from 7am to 9am and from 1pm to 3pm daily.

But the plan is a temporary relief to a long-standing problem in the community. “The gang wars have their own dynamics. The problem is historical and we have not seen a firm solution to it,” says Knight.

In a statement issued yesterday, the Equal Education Law Centre noted its disappointment at the insistence by the WCED that it is not the party that is primarily responsible for protecting learners and teachers on schools’ premises.

Sherylle Dass, an attorney at the Equal Education Law Centre, says that although the WCED cannot address the gang violence alone in the Manenberg schools, it needs to play a leading role.

Dass wrote: “In the view of the EELC, and as suggested by the High Court judgment, the WCED should take a leading role in prioritising and convening an effort to do so [provide safety].”

In a email response to GroundUp, Bronagh Cassey (Spokesperson for the WCED) said that in addition to the safety plan tabled by the SAPS, the WCED is also constructing and repairing fences at each of the 14 Manenberg schools in addition to the work done through the Safe Schools programme.

In her State of the Province Address this past Friday, Premier Helen Zille called on President Zuma and Police Minister, Nathi Mthethwa, to take action. Zille also called for the reinstatement of the special gang unit.

Zille said: “We believe the re-establishment of this unit is critical if we want to rid our communities of gangs and the violent crime and scourge of drugs associated with them.”

In its recommendations on building safer communities, the National Development Plan suggests that urgent security matters should be escalated to the Member of the Executive Committee for Education (MEC) and the Premier.

The NDP recommends that the Premier should table a report to the Provincial Coordinating Committee (PCC) on matters relating to safety of learners, including the nature or lack of infrastructure at schools. This report should be open to the public and allow for public comment.

It is unclear what the prospects are for the Manenberg learners and teachers. For now, increased police presence seems to be their only relief. “We do not want armed guards in our schools. We feel caged. But given the situation, they’re our only hope,” says Knight. DM

Photo: A policeman stops a child from entering a crime scene at a house where 24-year-old Yusuf Hector was shot dead in Manenberg on the Cape Flats, Thursday, 15 August, 2013. The Western Cape Education Department has closed 14 Manenberg schools until Monday next week because of gang violence in the area. Picture: Nardus Engelbrecht/SAPA