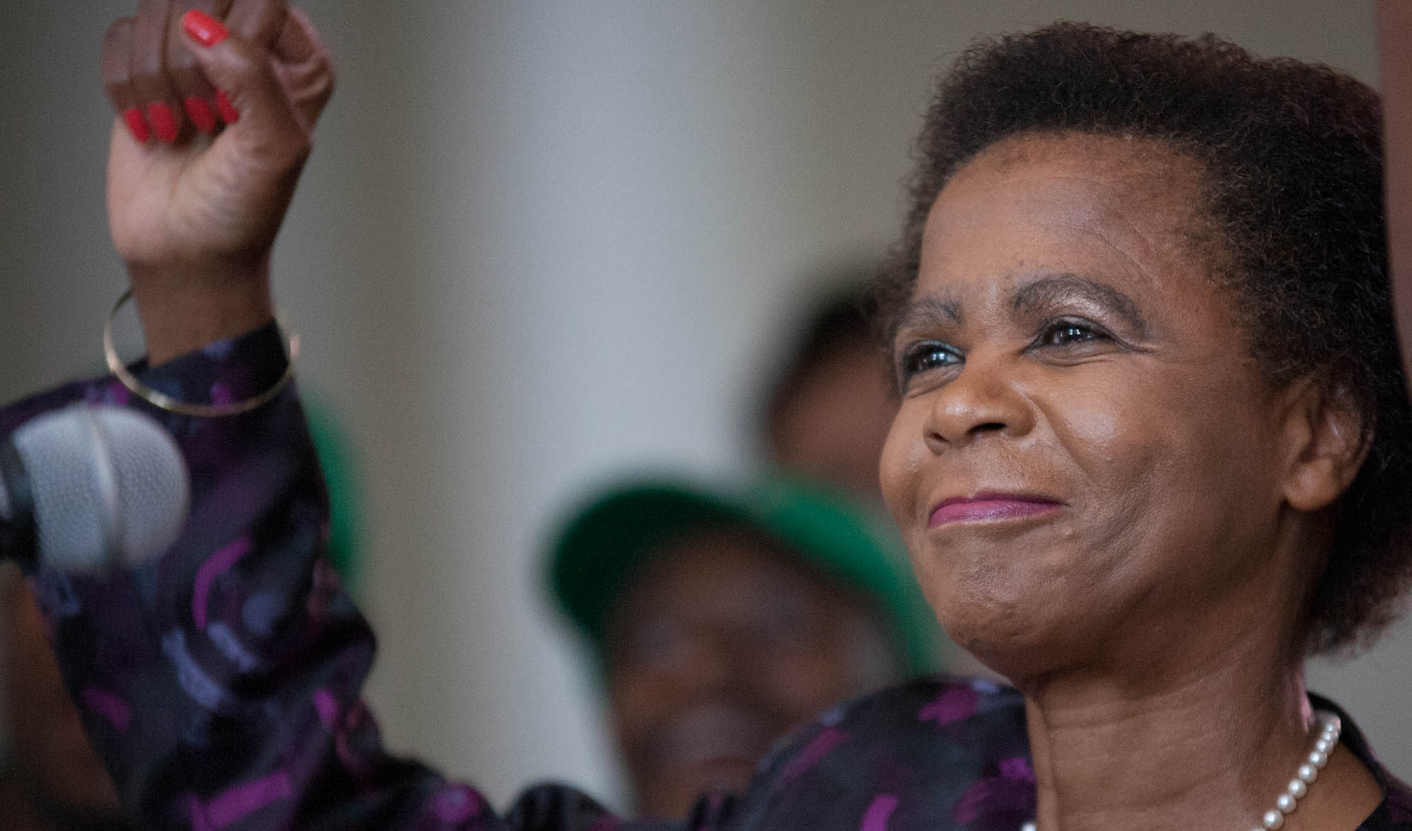 Agang SA is battling to overcome its leader Mamphela Ramphele’s comical week as the Democratic Alliance’s presidential candidate. On Sunday GREG NICOLSON heard the party’s alternate state of the nation address in Johannesburg. The DA debacle isn’t all bad, said Ramphele, but Agang has a lot of work to do if it wants to make any difference at this year’s elections.

“My mother was kitchen girl, my father was a garden boy; that’s why I’m a citizen,” sang Agang supporters in the Old Women’s Jail, Constitutional Hill, remixing the communist chant to include the party’s equivalent of “comrade” – citizen. A single minibus taxi and a dozen cars sat in the parking lot. There were no buses and no waves of party supporters on their way. But inside the Jail’s concrete enclosure the song reverberated off the walls with the 100 supporters trying valiantly to support their leader.

This weekend was about promises. The Economic Freedom Fighters promised everything but a Breitling for all South Africans. The ANC promised to keep fighting. The DA promised an inclusive economy. Agang offered “to restore the promise of freedom”, to bring back the excitement of Mandela and Pienaar lifting the Rugby World Cup.

On 18 February last year, Ramphele stepped into the same Constitutional Hill room as a revolutionary elder arriving to change politics. On Sunday, the venue was the same and Oscar Pistorius is once again about to take the headlines away from politics. But Ramphele’s burly bodyguards are gone, the international press doesn’t care and the handful of local journos aren’t particularly excited either. Her speech lacked punch; it was direct and poetic but didn’t pass the rigours of an election year when only the best and direct rhetoric matters.

“To launch a new party so soon before the election is not easy,” began Ramphele. “The most difficult thing is South Africans’ mindset. The South African people have lost faith that they can change their circumstances,” she continued later. Together, people need to listen, reflect and shape their futures but the “mindset change” has been hard to achieve, Ramphele’s realised. “Many people want change but they don’t want to invest their energy, invest their resources in change.”

The event was billed as a “citizens’ state of the nation address” (odd, considering President Jacob Zuma delivered the official address 10 days earlier and most parties had either presented their alternatives or finished with their criticisms). Agang, however, said it wanted to express people’s view after having garnered opinions since the “political party platform” was launched a year ago.

“No, Mr President, you do not have a good story to tell. The story you tell sounds good only to your own ears, and to the ears of those who desperately want you in office. Your good story is not shared by the majority of citizens of our nation. The good story came and ended with Madiba. When Madiba and Francois Pienaar raised the William Webb Ellis Rugby World Cup in 1995, citizens too held the trophy high in the air. They were proud. They celebrated with Madiba. What have citizens to celebrate with you?” asked Ramphele.

When the speech ended an Agang supporter asked to speak. “There is a time for everything and a season for every activity,” announced 22-year-old Nhongo Solo. “She is Dr Mamphele Ramphele, the mother of the nation, a woman of integrity and credibility.”

Winnie Madikizela-Mandela’s fans would have cried.

The Agang supporters filed out of the room and Ramphele got more interesting during question time. She was asked about her one-week stint as presidential candidate of the Democratic Alliance (DA), which was sold as a game-changer but ended in bitter annulment, tarnishing Ramphele as a fickle politician, unused to party consultation, unaware of electoral laws and unfit for an office outside of the ivory tower. The DA was embarrassed, but with its size and presence in Parliament, it has found it easier to shift criticism towards Ramphele.

Do people still trust Ramphele? Obviously the young poet Solo trusts her and so do the other supporters in the room, she said. She continued to argue the DA move was a genuine attempt to fulfill her promise of overcoming divisions by realigning opposition parties beyond historical bases.

“We underestimated the level of resistance on the DA and Agang sides,” she said. Then, turning towards the positives, “There is always a silver lining to every dark cloud…. There is no one in South Africa who doesn’t know Agang. It is free advertising.” Divisions in the party reflect divisions in South Africa, she said, and the departure of key staff, such as communications director Thabo Leshilo, immediately after the failed DA venture was due to restructuring rather than politics, Ramphele claimed.

But Agang’s struggles can’t be reduced to South African divisions or Codesa-like disagreements, a comparison Ramphele likes to make. While the upstarts EFF were able to pull tens of thousands of people to its manifesto launch on Saturday, Agang had a lack of citizens at its citizen’s state of the nation address. Ramphele is embarking on an election tour and the party will launch its manifesto on 8 March in Soweto. That will be a final test of whether her entrance will have any effect on the shifting sands of politics (remember the National Union of Mineworkers SA’s plans to launch a party, albeit not to contest the May 2014 elections) or whether Agang will fail to garner support and be remembered as just another example of a much larger phenomenon.

Despite all her rhetoric, there’s little to suggest Ramphele will have the influence some expected from her in 2013. The left is prime for the taking, but on the economy she’s right of centre. The youth vote is more important than ever, but she doesn’t have the populist appeal of other leaders. Then there’s the DA scandal, which Agang hasn’t yet been able to escape.

“A week is a long time in politics,” Ramphele smirked on Sunday. If she’s to make a difference on 7 May, she’ll have to make every day count. DM