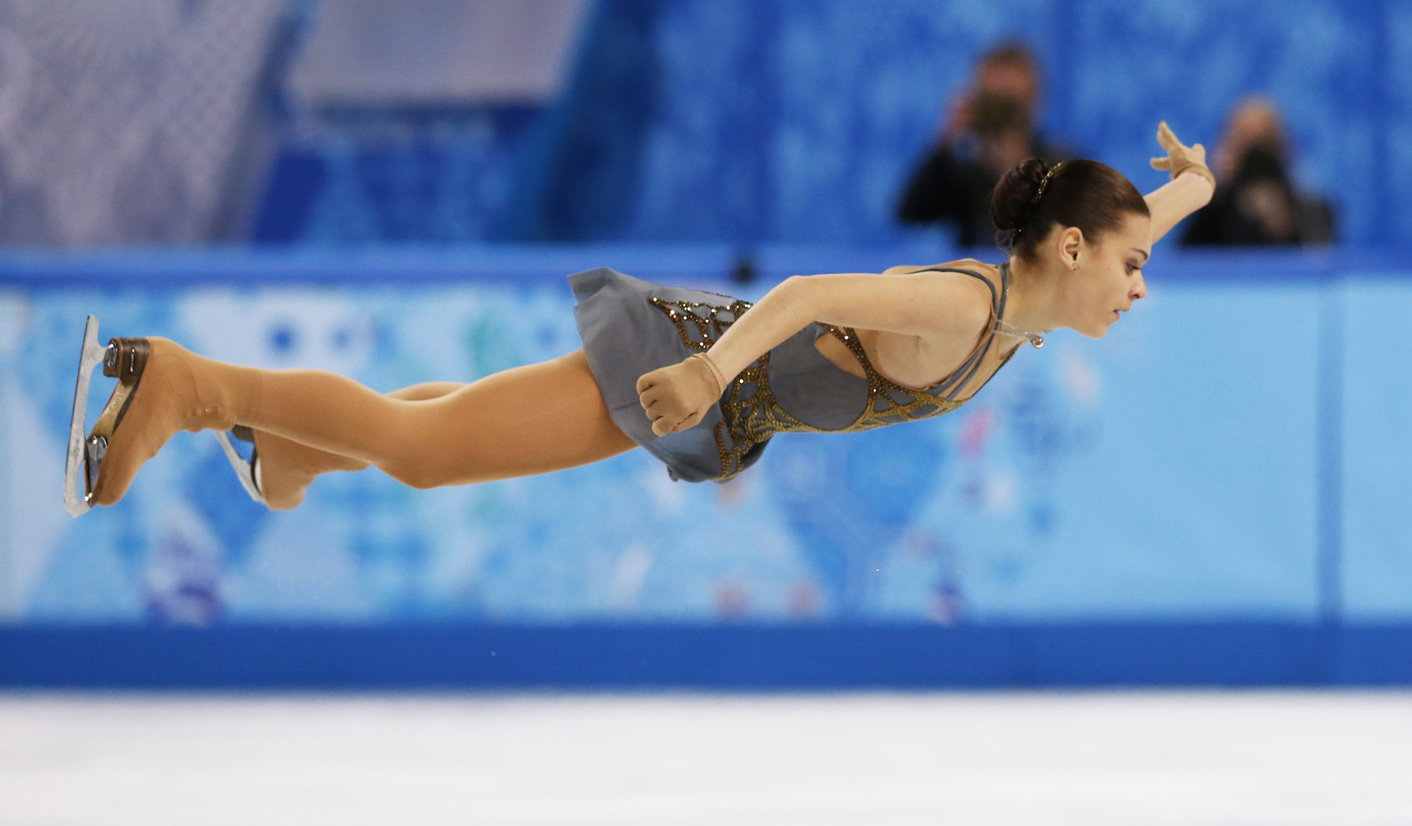 The women's figure skaters provided a thrilling climax to Thursday's Winter Olympics action when Russian Adelina Sotnikova claimed gold, but a skier's decision to pull out of the Games in protest was a reminder of the crisis in neighbouring Ukraine. By Mike Collett-White.

Seventeen-year-old Sotnikova was second going into the free skating programme, and whipped the partisan crowd into a frenzy with an energy-sapping routine.

The result left many neutrals scratching their heads about what exactly the judges saw, or did not see, as the Russian was the only one of the top three athletes to have a snatched landing at the end of a combination jump.

In contrast, outgoing Olympic champion Kim Yuna of South Korea delivered a flawless display full of grace and beauty, but in the eyes of the judges she was no match for the Russian.

At the nearby Bolshoy Ice Dome there was yet more drama on the ice, as the Canadian women’s hockey team came back from 2-0 down to win the final 3-2 in overtime against the United States.

The win capped an undefeated run in Sochi for a Canadian team that have won four of five gold medals since women’s ice hockey made its debut at the 1998 Nagano Games.

Sotnikova’s victory was the perfect tonic for a home crowd still smarting from Wednesday’s bitter men’s ice hockey defeat by Finland in the other most coveted Olympic title on the ice.

“I found something totally different in myself today,” Sotnikova said afterwards. “I had a bit of nerves before I skated, but just before I started I was completely calm. I just felt how much I love to skate. I think I found a new me.”

Away from the sporting drama, Alpine skier Bogdana Matsotska said she had withdrawn from Russia’s first Winter Games in protest against Ukraine President Viktor Yanukovich, who enjoys Moscow’s backing, and his government.

The Ukrainian’s decision came in the wake of deadly clashes between demonstrators and security forces in which at least 67 people have been killed, 39 of them on Thursday when a gun battle broke out in the centre of Kiev.

“I have decided not to take part in the slalom, my favourite discipline (on Friday), because of the horrible events that are happening in the capital of my Ukraine, in the Maidan (square),” 24-year-old Matsotska told Reuters Television.

“My friends are there at the Maidan, people I know, close friends of mine. To go on the start line when people are dying and when the authorities broke the main rule of the Olympic competition, which is peace – I simply cannot do it.”

Some athletes from Ukraine asked for permission to wear black arm bands while competing in order to honour those killed.

The International Olympic Committee said it had not stopped them from doing so, but that the team made the decision alone.

Ukraine team officials and some competitors held a minute’s silence in memory of the victims, and black ribbons were attached to Ukraine flags hanging from the balconies of their building in the athletes’ village.

“I am not a political person, I am totally out of politics and political parties, but I stand against these horrible actions that Yanukovich and his government are taking against our Ukrainian people,” Matsotska said.

Turmoil in Ukraine has raised uncomfortable questions for Russia and its president, Vladimir Putin.

Nationwide demonstrations erupted in November after Yanukovich bowed to Russian pressure and pulled out of a planned trade pact with the European Union, deciding instead to accept a Kremlin bailout for the heavily indebted economy.

Putin will be desperate for the crisis not to overshadow the Games, which he has used to try to project a modern, more tolerant Russia through a well-organised Olympics and his own smiles, handshakes and hugs with athletes and officials.

Thrilling sporting action has generally pushed criticism to the background, but it resurfaced this week with the detention in Sochi of members of protest group Pussy Riot, well known in the West for attacking Putin’s human rights record.

They released a music video on Thursday criticising Russia’s staging of the Winter Olympics that includes clips from an incident in Sochi when Cossacks beat members of the group with a whip as they tried to perform.

“The Olympics create a space for the complete destruction of human rights in Russia,” said Nadezhda Tolokonnikova, one of the group’s most prominent members who has already been jailed for her protests.

“Here we are banned from speaking out. Here everyone’s rights are banned, including political activists, LGBT representatives, ecologists,” she told reporters in Sochi.

The Kremlin denies cracking down on opponents. But the video, and the intense media interest it has generated, have the potential to embarrass Putin.

Singer Madonna, one of many international performers who have spoken out in support of the group, expressed her admiration for its stand.

“Are you kidding me? Are the police in Russia actually whipping Pussy Riot for making music on the streets?” she wrote on Twitter.

“Is this the dark ages? GOD bless P.R. They are fearless!”

In other sporting contests on Thursday, Canada won the women’s curling final 6-3 against Sweden, maintaining their unbeaten record in all 11 games played in Sochi.

Victory over the Swedes, who were seeking a third straight title, avenged a bitter defeat for the Canadians in the final in Vancouver in 2010.

Of the two medals up for grabs in freestyle skiing at the Extreme Park in the Caucasus Mountains above Sochi, the first went to world champion Jean Frederic Chapuis, who led a French podium sweep in the men’s ski cross final.

Norway scraped the narrowest of wins in a dramatic finish to the Nordic combined men’s team event, holding off Germany to grab the gold by 0.3 seconds.

That victory cemented Norway’s place atop the medals table with 10 golds.

As the Games enter the home stretch, with less than four days of competition to go, winning gold is not everything.

Britain’s tense win over Switzerland in the women’s curling bronze medal match meant the country is now guaranteed to match its best ever Winter Games medal total of four.

And the Swiss women’s ice hockey team were ecstatic when they came from behind to beat Sweden 4-3 in the bronze medal game, for their first ever podium finish in the event. DM