The unbearable heaviness of being Zuma: Number One feels the heat 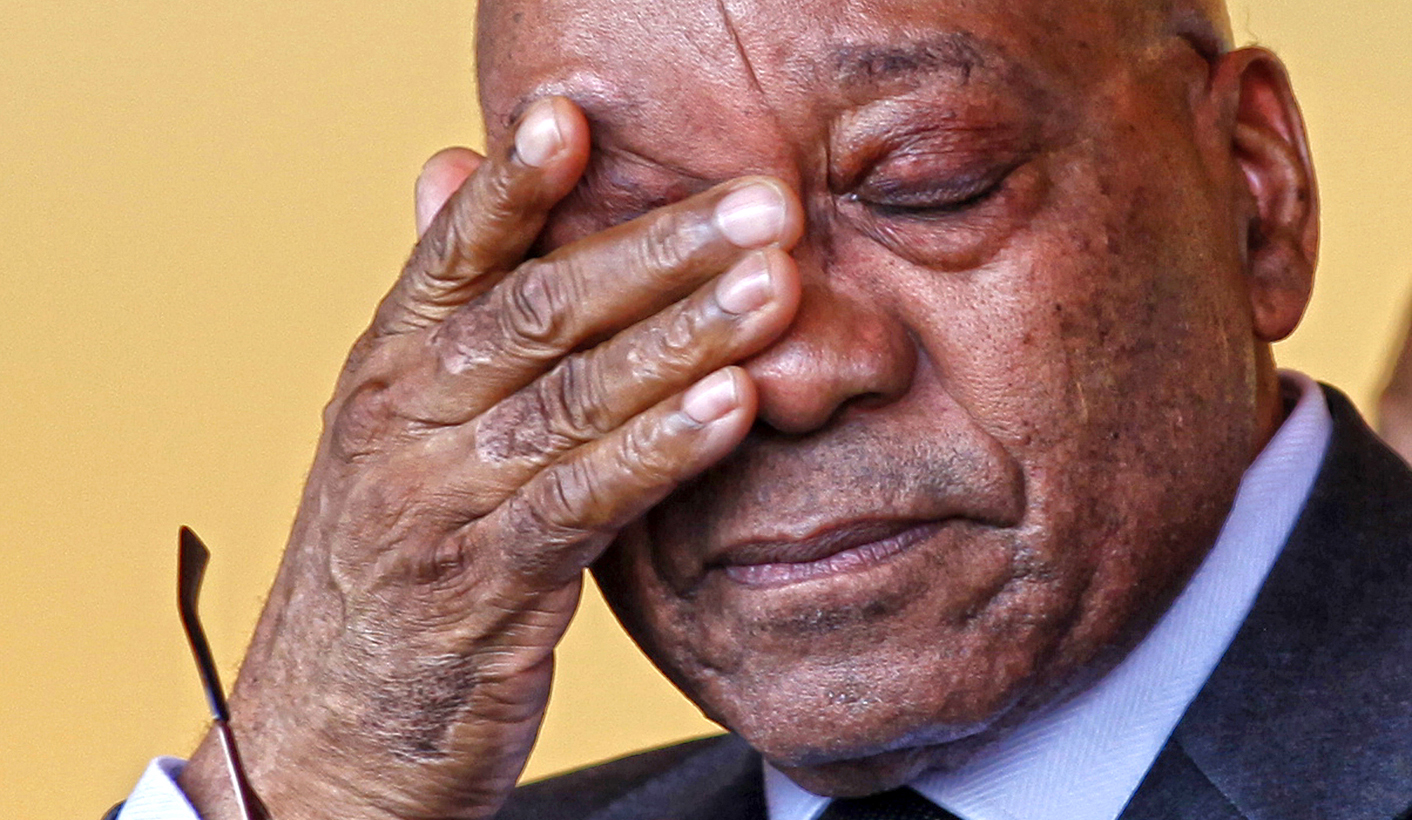 If there were ever a time President Jacob Zuma needed to bring his A-game, it is now. He is the face of the ANC’s 2014 election campaign, he is running for his second term as state president and is the chief target for all the ANC’s political opponents and detractors. Yet this weekend, he slunk away to his Nkandla estate and “relaxed” when he should have been on the final voter registration drive in Gauteng. Could it be that after years of living large and on the edge, Jacob Zuma is finally taking strain? By RANJENI MUNUSAMY.

Usually, when President Jacob Zuma is feeling down and out, the best way to prove he is the most popular political figure in the country is to seek an audience with ordinary people and let their adoration of him do the rest. At the height of his battle with Thabo Mbeki and when he was facing two criminal trials, he was iced out of the ANC and deprived of public platforms from which he could build support. The ANC leadership at the time knew this was his kryptonite – cutting him off from the masses was the way to smother him.

When his allies in Cosatu, the SA Communist Party, the ANC Youth League and the Young Communist League provided him with alternate platforms, Zuma was at his best and revelled in mass popularity.

How times have changed.

One term as state president has seen Zuma disappear behind walls of bureaucracy and security, unable to interface with the ordinary as much as he used to. But even if it were not for the demanding schedule of the presidency, Zuma does not have the same level of popularity and crowd appeal he had when he was the underdog fighting for political survival.

The whole world saw the look on Zuma’s face at the memorial service for Nelson Mandela at FNB Stadium in December when the crowd jeered at him. Zuma was stunned. He could not believe that the masses of invisible people, whom he thought would always adore him, were booing him at the highest profile event South Africa would host since the dawn of democracy.

Over the weekend, the presidency announced that Zuma was spending the weekend “relaxed at home in Nkandla”. This meant that he had abandoned his deployment by the ANC to campaign Gauteng on the crucial final voter registration weekend.

The ANC is playing catch-up in Gauteng as the Democratic Alliance’s premier candidate Mmusi Maimane has been on the campaign trail for several months in the province, targeting townships and setting his sights on the burgeoning black middle class. The impact of Maimane’s campaign on traditional ANC strongholds is difficult to assess, but it would be foolhardy for the ruling party to take its constituency for granted. Therefore, having the president weigh in now in areas which have become hotspots for community protests would have been a boon for the ANC in Gauteng.

The province has been experiencing an upsurge of service delivery protests – according to the police, more than 500 in the past three months – which shows no sign of abating.

The large numbers of informal settlements and townships in Gauteng with poor or disrupted municipal services has seen frustration and anger boiling over. Like in other parts of the country, the state has responded by dispatching the police instead of elected representatives to deal with protesting communities, several with deadly consequences.

The situation is crying out for firm political leadership, for a person with power and popularity to hold his hand up, quell the violence and listen to the cries of the people.

The Jacob Zuma of eight years ago could have pulled this off.

The Jacob Zuma of 2014 took time off to relax at his Nkandla estate instead.

The presidency and ANC’s communicators will argue that Zuma is entitled to time off and that in light of his State of the Nation Address this week, he needs time to reflect on this all-important speech. This argument, of course, has merit.

But let us not forget that this is only February, and that the president spent most of the holiday season at Nkandla. He did not travel to Davos for the World Economic Forum and no official explanation was given for this, other than that he was busy. Zuma’s deployment schedule during the ANC’s 8 January commemorations and for election campaigning has been noticeably less intense than that of the other ANC officials.

Then there was Zuma’s visit to Durban’s Life Entabeni Hospital in mid-January, where Zuma’s cardiologist Dr Deena Dayalu has rooms. At the time the Sunday Tribune quoted a hospital source as saying that Zuma had seen Dayalu for treatment, which had not been planned. But the presidency played down the hospital visit, with spokesman Mac Maharaj saying it had been an annual check-up and that Zuma was in good health.

Last week the Sunday Times reported that Zuma’s household woes were taking a toll on him and that his family was discussing whether he should only serve two years if he wins a second term as state president. The newspaper reported that Zuma was under financial pressure from his family as well as villagers at Nkandla, who descended on his rural residence every time he was home to seek advice and monetary assistance. Feuding between two of his wives – one of whom is embroiled in a messy saga involving allegations of infidelity and blackmail – was also placing strain on the president, the newspaper said.

On top of all of this, Zuma has to face the release of Public Protector Thuli Madonsela’s investigation report into the R206-million security upgrades at his Nkandla home. Zuma has apparently asked for an extra week’s grace to respond to Madonsela’s interim report so he will have to provide his version of events to her on Friday 14 February, the day after he addresses the nation at the Opening of Parliament.

So far Zuma has attempted to deflect knowledge and blame for the security upgrades onto government, and claimed he was paying for the building renovations at his home. He repeated these sentiments in a rambling interview with Independent Newspapers this weekend. Zuma was quoted at length in Independent’s Sunday publications railing against the media for reporting on the Nkandla upgrades and showing pictures of his home.

“I feel very unhappy about this. Firstly, the manner in which the Nkandla homestead is projected is wrong. For an example, the pictures shown there give the impression it is all being built by Zuma with state money. It is not true. This makes me very uncomfortable,” Zuma is quoted as saying.

“The government came very late to introduce security features at the level that they were being introduced before Zuma became the president. It was their confidential things. They never discussed with anyone of the family. So even if you wanted to talk, the family didn’t know. The very government… they are the ones who know better,” Zuma said.

Seemingly, his position as head of government does not prohibit him from disowning its actions.

By now Zuma will probably be aware of just how much worse his problems will be once Madonsela’s report is released. For a long time, he has been able to defer the Nkandla issue until all the investigations were completed. Once all the facts are on the table, it would be difficult for him to shrug his shoulders or point at someone else.

Despite all his personal and political problems, Zuma is still going full steam ahead towards his second term as president. His fatigue is probably partly due to the awareness that things will not get better, especially after the scandal-plagued, disastrous first term.

Zuma has overcome many tests in his lifetime, including imprisonment, the ANC underground, negotiating peace when his home province of KwaZulu-Natal was plagued with violence, being fired as deputy president and being charged with corruption and rape. He overcame all of these because of his strong character and the support behind him.

Zuma is now older, has receding public support and is also exposed as the person with whom the buck stops in government. He is no longer the victim. It is difficult to be the person whom the country blames for all its problems, especially when he is used to other people taking the heat for him.

It might have taken a long time, but the realisation has probably hit Zuma now.

It is hard to be Number One. DM