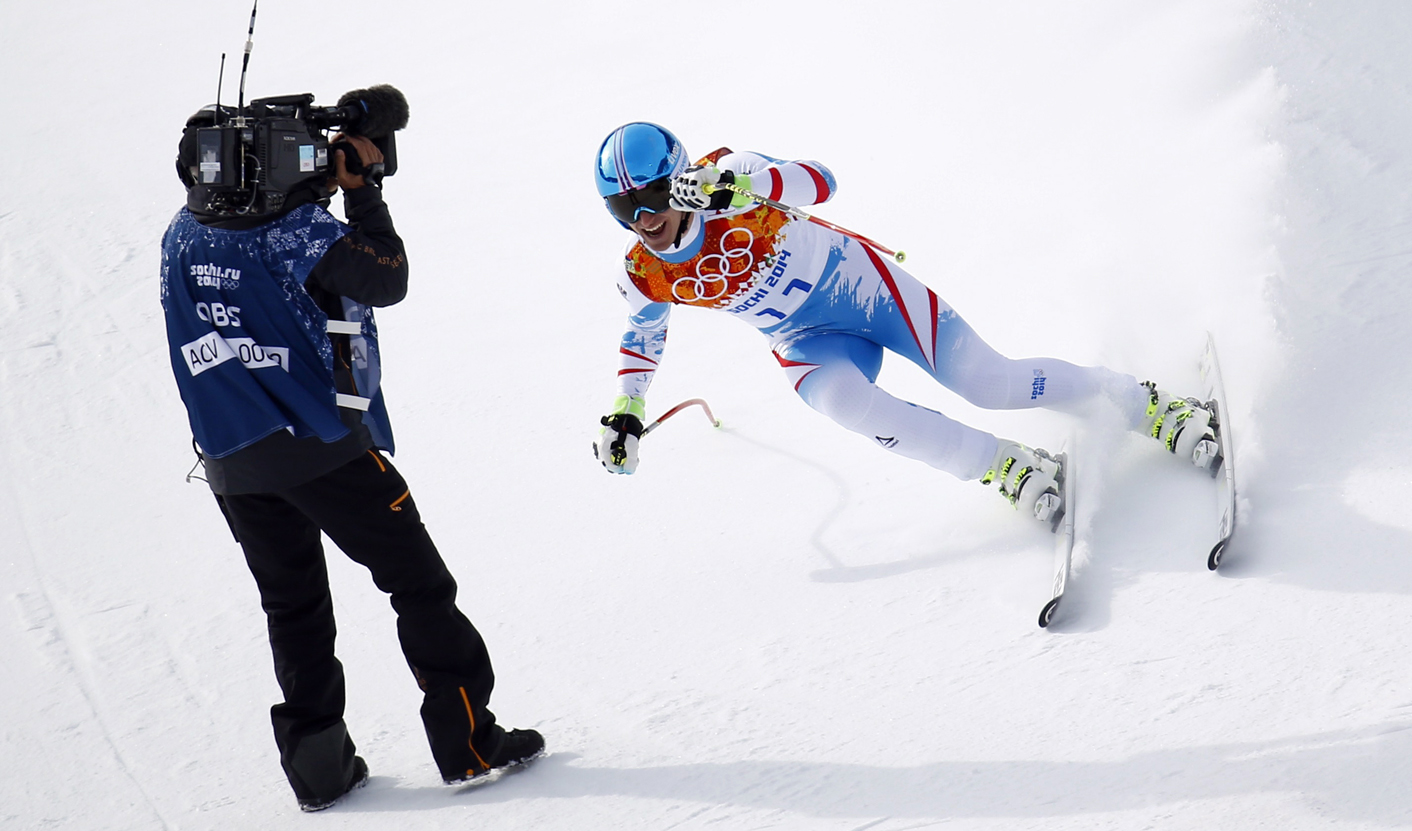 Home fans roared Russia to its first gold of the 2014 Sochi Olympics on Sunday when figure skating's ultimate showman Yevgeny Plushenko sealed the team title, while in the mountains Austria's Matthias Mayer conquered the perilous Rosa Khutor run to claim the men's downhill. By Mike Collett-White.

With Russian President Vladimir Putin among the near 12,000 capacity crowd at the Iceberg Skating Palace, one of several new arenas built for the Winter Games, the hosts built an unassailable lead some 90 minutes before the contest ended.

“When we got off the ice, Vladimir Vladimirovich (Putin) congratulated us and said ‘Good job’,” said ice dancer Ekaterina Bobrova. “It was really nice and completely unexpected.”

“It’s crazy. It’s the greatest thing you can achieve as a sportsman – unbelievable,” said the 23-year-old.

As Russia began mining Olympic gold, Putin – who has staked his reputation on staging a successful Games – touched on the Games’ monetary might when he said hosting the event had helped shelter the country from economic crisis.

Allegations of widespread corruption have dogged the huge seven-year infrastructure project, and with a price tag of more than $50 billion it is the most expensive Olympics ever.

“It is fully justified to say that the Olympic project, the Olympic construction work as a whole, was one of the most significant anti-crisis measures in the country,” Putin said in comments to state TV broadcaster, Rossiya 24, aired on Sunday.

Putin says there is no evidence of major corruption in Sochi, but a recent survey by independent pollster Levada showed 47 percent of Russians believe the cost of the Games has soared because funds have been embezzled or mismanaged.

Back on the ice, Irene Wust of the Netherlands won the women’s 3,000 metres speed skating crown, but the biggest roar went to Olga Graf, who finished a surprise third to give the host nation its first medal.

Graf punched the air in delight upon seeing her time, but her expression turned to embarrassment as she unzipped her suit to the waist before suddenly realising she had no t-shirt underneath.

“I heard the crowd cheering for me and I didn’t expect such support from the audience,” said the skater, before addressing her wardrobe malfunction.

“I totally forgot that I had nothing under my suit,” she said, her steely focus softening into a broad smile.

Despite the drama unfolding throughout the Games, organisers said many ticket holders were missing out because they were turning up too late, explaining some of the thousands of empty seats at skating and skiing events.

Even at the men’s downhill there were several hundred vacant places in the stands at the bottom of the fearsome descent.

“The downhill is the king of the sport so I don’t know what’s going on. The Russians have no downhill skiers, that’s the problem here,” said Austria’s 1980 Olympic champion Leonhard Stock, surveying stands that were more than half-empty only minutes before the scheduled start of the race.

Other venues, too, were far from full, and organisers urged ticket holders to turn up early because a sizeable number were not getting through security in time.

The stringent checks are largely explained by threats from Islamist militants in nearby Chechnya and neighbouring regions who have vowed to attack the Olympics, which they say take place on land seized from Caucasus tribes in the 19th century.

Some 37,000 security personnel are on high alert in and around the Black Sea resort of Sochi, although officials believe the risk of militant violence is greater elsewhere in Russia.

A major attack during the Games would embarrass Putin, who launched a war to crush a rebellion in Chechnya in 1999.

Top lawmakers from the U.S. House of Representatives’ intelligence and homeland security panels warned of a serious threat of attacks in Russia during the Olympics, though U.S. officials say the Games grounds are secure.

A gunman killed a nun and churchgoer and wounded six other people on Sunday in a Russian Orthodox cathedral on the island of Sakhalin, thousands of kilometres (miles) to the east, but there was no apparent link to Sochi.

As well as international unease over the risk of violence, preparations for Russia’s first Winter Games have been overshadowed by the outcry over recent legislation banning the promotion of gay propaganda among minors.

Russia believes the law is needed to protect minors, but activists say it fuels anti-gay violence.

Lesbian Austrian ski jumper and gay rights advocate Daniela Iraschko-Stolz said public reaction to the law had been exaggerated. The 30-year-old married her lesbian partner last year, a rare case of an Austrian athlete coming out as gay.

Asked whether she was worried about the law, Iraschko-Stolz replied: “No, on the contrary, I think everything is being blown up bigger than it is. I had a very good welcome like every other athlete: there were absolutely no problems.” DM