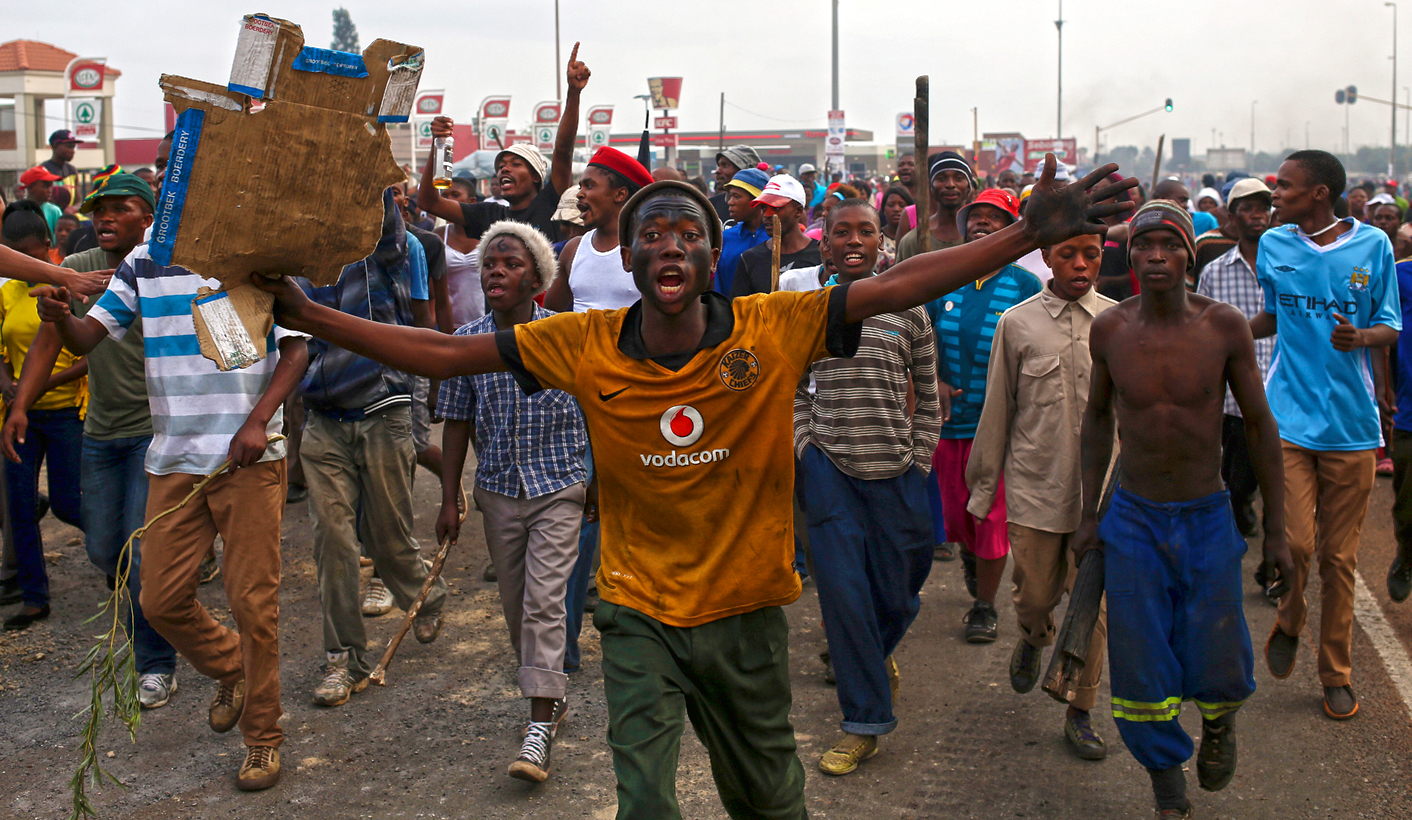 Violent service delivery protests are raging across the country. GREG NICOLSON looks at why poor communities are targeting the scant government resources they do have.

Around 300 people are said to have set fire to the East London City Hall on Wednesday. In January, members of the South African Municipal Workers Union (Samwu) vowed to make the city ungovernable and occupied the historic building. Their protest for a 14th cheque has been going on since December, briefly halted out of respect for the passing of Nelson Mandela. On Wednesday, the protests reached a crescendo as the unionists allegedly forced their way past police and firebombed the council chambers.

Protests continue outside Bronkhorstspruit, with residents targeting government buildings. A clinic was burnt down on Wednesday, along with a house and a hall. On Tuesday, residents of Zithobeni torched a resident’s home as well as the library. A satellite police station and municipal offices were burnt in Rethabiseng and Zithobeni in the previous days. The protest is about electricity. The pre-paid systems have been changed and residents complain that they either don’t have power or their costs have increased. They waited in vain to be addressed by government on Wednesday evening, but no one arrived.

President Zuma called for calm on Sunday, telling communities they have a right to protest, but they must stay within the confines of the law. He made similar comments in 2009, saying such actions “do not build a strong nation”.

The irony is often pointed out on social media and talk radio: why do communities fighting for the basic services they need to live dignified lives burn down the government services they do have? It looks like 1976, when students across the country targeted anything associated with the Apartheid government, a total onslaught of burning, looting and attacking the system. But why this approach now, during democracy?

The protests in Boiketlong, Sebokeng, are telling. Two people were shot on Wednesday, one fatally, as residents protested for RDP houses. Sebokeng area has been a hotbed of activity for years. “The municipality wants to put it on record that the protest has nothing to do with the provision of basic services. It is related to housing development in the area which is the competency of the Gauteng Province Department of Housing,” the Emfuleni Municipality said in a statement on Wednesday.

One of the key issues in Sebokeng is housing, so the municipality’s comments are somewhat true, but service delivery protests are never that simple. “That area that is protesting, it has been a long time that they have been waiting for the municipality to provide them services,” says Bricks Mokolo, a long-serving activist from Orange Farm who knows the issues well. Those issues are housing, water, sanitation and general service delivery. “So far, they don’t see anything,” said Mokolo. They don’t see any improvement, but every come election time the ANC makes grand promises.

“It’s obvious – service delivery,” says one of the protest leaders in Sebokeng, who didn’t want to be named because “my life is at stake”. The resident has lived in the area for 17 years. There are a number of complaints. Take last winter, for example: because the residents burn coal in barrels to keep warm there were shack fires and subsequent fatalities. The struggle for housing, services, “anything to help”, has led the community into frequent discussions with the municipality and the Gauteng provincial government.

At public meetings the community are told they are foreigners or are raising personal issues. Ask for the local budget and there’s nothing forthcoming. Concerned community members submitted a petition and received only vague responses.

“What is so painful is when it’s time for elections, they come to us [and say], ‘Hey guys, we’re going to build you houses,”’ says the resident. But the promises are wearing thin as the same issues and broken promises that were first raised around eight years ago still exist. “We can’t stand for this anymore.”

The response to protests doesn’t help. The resident says protestors gathered on Wednesday morning and met a small group of ANC supporters, in support of the mayor, who wanted them to stop protesting and clear debris off the road. After a scuffle, the ANC supporters later returned and allegedly fired two gunshots at close range, killing one protestor and injuring another. Police, says the resident, are biased. “They shoot and shoot every time […] You act like you’re here to protect us but meanwhile you’re against us.”

Speaking at a policing conference last week, National Police Commissioner Riah Phiyega admitted there are problems in the police response to protests. Police have to go beyond procedural and technical changes, she said, but need to improve how they deal with communities. But the problem goes beyond that.

On Wednesday, the Communist Party in Gauteng criticised how politicians react to protests. “There is a deeply disturbing trend of bureaucratic handling of these protests, including the pathologically long time it takes for authorities to respond to these protests and to listen to communities,” said the party. “Failure by authorities to intervene decisively and timeously perpetuates these acts of hooliganism and barbarism such as the burning and destruction of clinics, police stations and community property. What is concerning us as the SACP is that in many instances these community protests follows a series of requests for an opportunity to be heard which takes far too long for that hearing to take place.”

Studies have found service delivery protests are generally fuelled by a lack of communication, poor service delivery, corruption, the perception that there are no other avenues to voice grievances, and failed election promises.

In research submitted to the University of Zululand on the pattern of protests in Mpumalanga, Nokukhanya Noqiniselo Jili found, “The majority [of protestors interviewed] indicated that they were tired of empty promises and of waiting, therefore they were expressing their anger and frustration and wanted to show the government that they meant business […] This frustration then turns into aggression when something triggers it. Protestors have indicated that they have waited for too long for the services to be delivered, whilst promises for service delivery made by government, who protestors view as elitist, have been largely unfulfilled. Therefore, the young people of Mpumalanga province are frustrated and are behaving or protesting aggressively.”

In their recent book The Fall of the ANC: What Next? Prince Mashele and Mzukisi Qobo take a longer view: “A country in which the poor do not believe that the state can or will someday improve their lot is a country without hope. A country where the majority of citizens are poor and without hope is a powder keg waiting to explode. It is worse for South Africa, where the majority of its youth are unemployed, poor and hopeless. This youthful energy that is boiling; no one knows when it will burst – but burst it will.”

Time will tell whether the current protests signal the start of the bursting or just sparking spot fires. But in the coming months, violent protests are likely to continue (both winter and elections are on the way). The anger will once again be taken out on institutions of the system. They’ll attack government buildings, the closest thing to the state representatives that are too difficult and too slippery to lock down. DM

Last opportunity: Voters urged to register this weekend so they can make their mark