Cricket: It’s all up to Mitch to actually pitch 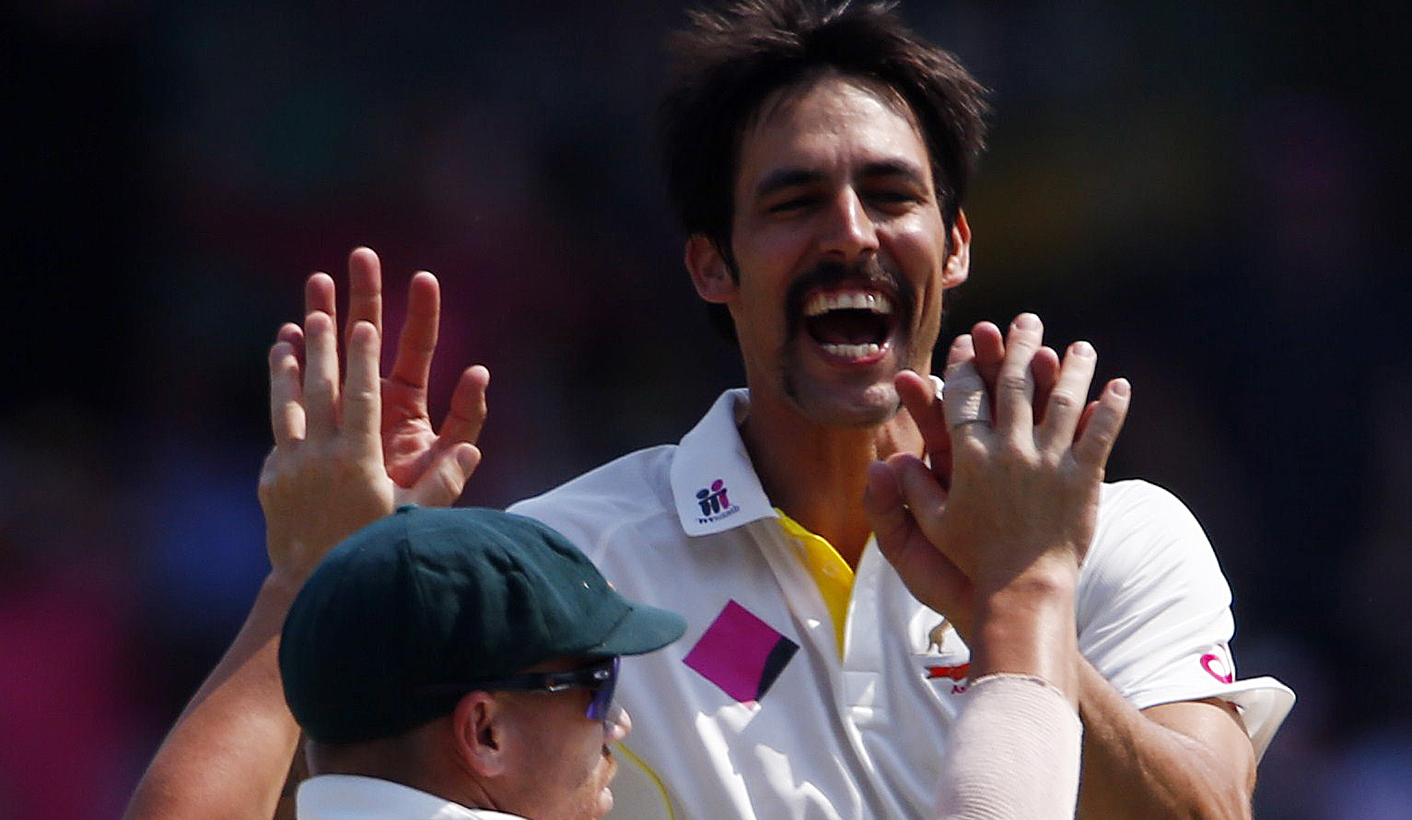 Mitchell Johnson has taken up the mantle of being the Aussie’s bowling “intimidator” for the upcoming three-Test series against South Africa. That’s all good and well, but the pressure is all on him since the Proteas have already neutralised him rather effectively in the past. By ANTOINETTE MULLER.

Just in case you’ve been under a rock for the last few months, Mitchell Johnson is all the fast-bowling rage at the moment. During the recent Ashes series, he became a fast bowling cult-hero. He was crass, bombastic and brutal, and he blew England away with his left-arm pace. With 37 wickets in five Tests at an average of 13.97, Johnson rightfully earned himself a reputation as being Chief Destroyer.

It’s a mantle he is happy to hold and it’s something South Africa’s bowling coach Allan Donald is happy to indulge in. Johnson even thinks that his visceral fast bowling is something the South African spectators will be looking forward to.

“I’m happy to be the intimidator and to be talked of like that,” Johnson said.

“I’m coming over here after a great series being the intimidator against England. They’ve obviously seen all that, and I think they [South African spectators] are excited about seeing that as well.

“I had a lot of English [supporters] come up to me after the series, and even through the series, and they were just saying how good it was and how it brought Test cricket back to life. It’s great to hear those words. But I know I’ve been in this situation before. In ’09, everything was going really well [and then declined], but I’ve learned from that. I’m not going to underestimate anything – I’m just going to keep doing what I’m doing.”

The last time Australia toured South Africa, in 2011, Johnson was fresh off breaking Graeme Smith’s arm. But things didn’t go so well on that tour for the left-armer. He left with a broken toe and nothing more than three wickets for 255 runs. It was a woeful series for him, but that’s where the comeback began. Time off, surgery and regaining fitness has all played a part in Johnson returning to the top of his game as he has this summer.

However, as wonderful as his fast bowling skills are, Australia were very much flattered by an England team heading for the drain pipes. Equally important is that Johnson did not bowl more than 25 overs in an innings once. So inept were England, that Australia only needed to ask for the second new ball four times and Australia’s bowlers had much to bowl thanks to their batsmen.

Things are not as simple in South African conditions. Since the last time they lost a Test on home soil – back in 2011 against Sri Lanka – South Africa’s opposition have had to ask for the second new ball eight out of 13 times. They have scored over 400 three times on home soil in the last year. Sure, it might have been against weaker bowling than the Aussies, but if Johnson fails to make an impact, the pressure on his teammates becomes significantly more. Ryan Harris is bound to break down, Peter Siddle can only give so much and Nathan Lyon will, for the first time in over six months, play against opposition who will actually use their feet.

How strong the teams are mentally will also play a part. It might only be a short series lasting three Tests, but the mind games already began at the end of the Ashes, when a number of Aussie bowlers insisted over and over again that “they are the best bowling attack in world cricket”.

South Africa haven’t taken the bite and, instead, Allan Donald said yesterday that Australia have got “every right” to rate their attack after the “hell of a performance” they put up against England. That in itself might be seen as a mind game, but the South Africans certainly won’t be getting involved in any sort of public hand bag fight.

Mental toughness goes much further than a few jibes exchanged in press conferences, though. Australia gained a massive advantage in the Ashes in England by getting the upper hand on the mind games and mental battles. Right from the start of the series, where the tabloid press got involved with their “English medium pacer bowler” campaign, aimed at Stuart Broad, as well as “The Team of Nobodies” photo. Everything Australia did, from getting in England’s face with every wicket that fell to constant nagging in the batsmen’s ears, completely disintegrated their opposition. Planting seeds of doubt in a struggling side’s mind is easy, but it’s not quite so simple with the Proteas.

Although their reputation as chokers precedes them in one-day cricket, in the Test format, South Africa have a core group of players who are unflappable. A few of them might be prone to getting drawn into verbal squabbles on the field, but not so much that they lose sight of the target.

Most of the squad have already been put under pressure by Australia before. When the Proteas toured there in 2012, Faf du Plessis and AB de Villiers combined for a match-saving partnership of 89 runs off 68 overs with the former batting for over seven hours to help the cause.

Since readmission, South Africa has never won a Test series against Australia in South Africa. With their record over the last few years, a tough squad and a few obvious weaknesses in the Aussie line-up, this is their best time to do so. If South Africa want to create the legacy they so often speak of, nothing but a series win will do. DM