Analysis: The DA After 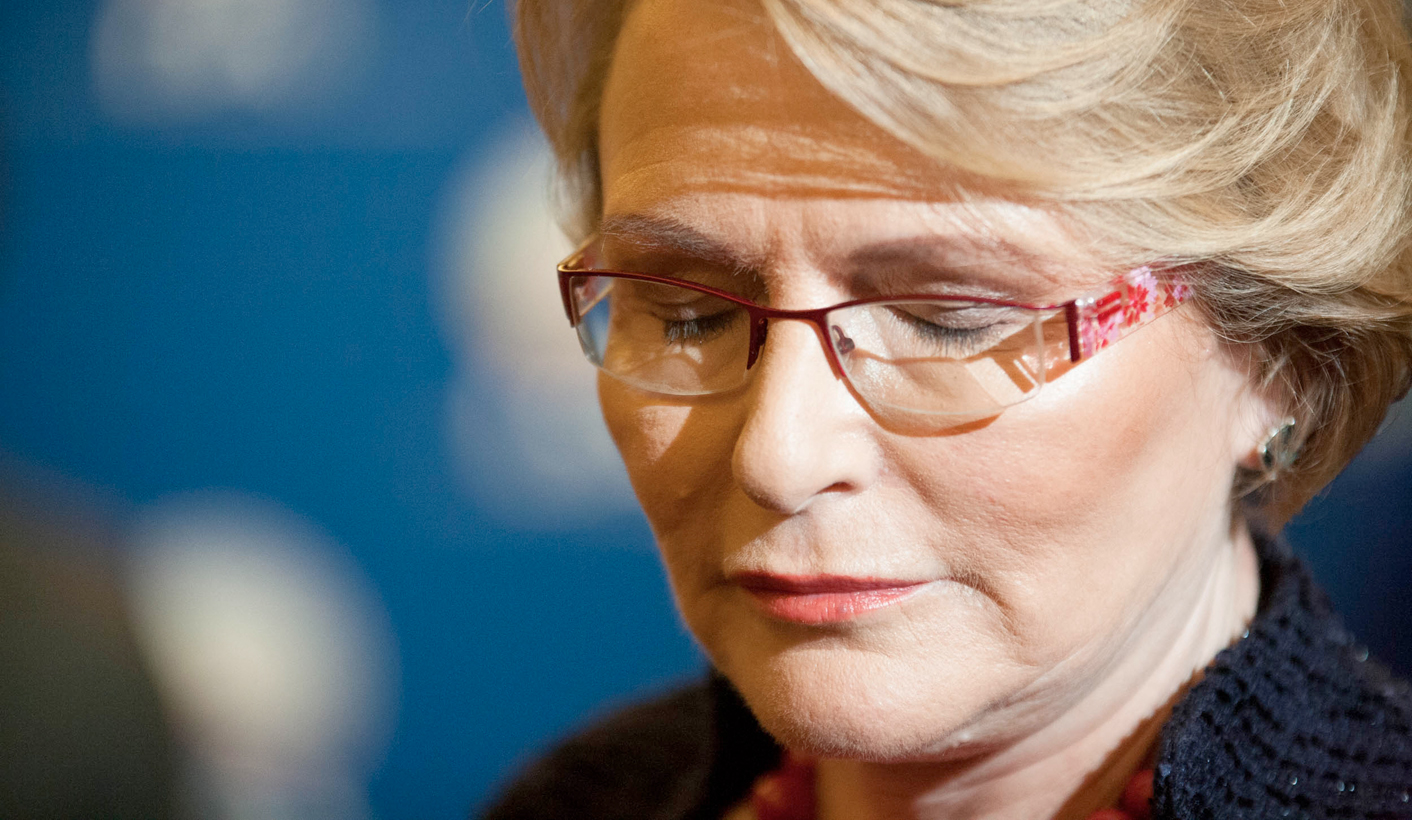 It was always going to be interesting to see how the DA would deal with the fall-out from the aborted DA-Agang merger, given that there have been few occasions on which the opposition party has been caught so publicly on the back foot in recent years. While the party trotted out the top brass as a combined front at a press conference on Monday, the spotlight was very much on Helen Zille, who has also made it clear that she is prepared to take individual responsibility for the fiasco. What the implications of this will be for future leadership struggles within the party is not yet clear, though we already know of one DA leader who opposed Mamphela Ramphele’s promotion. By REBECCA DAVIS.

Monday was a busy day for the country’s newsrooms: in between the DA and Agang both scrambling to explain themselves to the public after a nightmarish weekend, and the curiosity over the contents of Nelson Mandela’s will, a number of other stories attracted far less heat than they might have on any ordinary day – such as the resignation of SABC CEO Lulama Mokhobo.

Agang got their place in the public eye before the DA, running a press conference just an hour before Helen & The Gang got to have their say. With the advent of local 24-hour news channels perpetually hungry for content, these pressers have come to assume a greater importance than they might have had in the past, where the only people bearing witness would be a handful of journalists. Now increasingly they are broadcast live, and while the number of people able to kick back during working hours with a DSTV remote might be limited, there’s more incentive for political parties to make them count.

From the tenor of the statement released by Zille on Sunday, we got the sense that the DA’s recovery strategy would be heavily based on the heaping of blame on Mamphela Ramphele. Zille had, after all, not shied away from a character attack, announcing that Ramphele had “demonstrated – once and for all – that she cannot be trusted to see any project through to its conclusion”. Attack may be the best form of defence, but the obvious problem with this personal approach is that it opens you to questioning as to the strength of your judgment.

Zille was pedalling it slightly softer on the Ramphele ad hominems at Monday’s press conference, but was still at pains to send the message repeatedly that it was Ramphele who had messed everything up. Seeking to defend herself against the surely self-evident suggestion that the move had been rushed, she stressed that she had been in talks with Ramphele since 2010 – but, crucially, that Ramphele had “waned on and off” at various points.

The language of waning on and off, together with references to a “cat and mouse game”, painted – as it was intended to – the picture of an endlessly-vacillating, indecisive Ramphele. But given that this aspect of her behaviour was well known to Zille in the years of their negotiations, it again begs the question of why Zille was willing to rush through such a large gamble, at such haste.

Zille has an answer to this too: an ostensibly very deeply-felt sense of urgency about the precarious state of the country. “South Africa is in a race against time to save our democracy,” she said, citing the weakening of the country’s democratic institutions. This may indeed be her earnest conviction – though by most objective measures it would be considered hyperbolic – but the risky overnight promotion of Ramphele will read differently to most: as fuelled by little short of desperation at the need to secure a respected black leader with a Struggle pedigree.

But it was not sufficient that Ramphele was black, Zille stressed. The drawcard was also that she had an international profile; a global brand. (There’s an unanswered question about why an international profile should be relevant to grassroots local voters.) If Ramphele had only been black, and lacked what Zille saw as her significant stature, she would never have been in the running.

Zille took journalists more than once through the steps that led the DA to its fateful announcement last week: the fact that she sat down with Ramphele, read her the statement about the integration of Agang structures into the DA twice, and secured Ramphele’s agreement. Zille said she started getting worried about Ramphele’s intentions on the morning of the press conference, but it was Ramphele who persuaded her to continue. When Ramphele revealed her hand later in the week – that she wished to remain an Agang member while simultaneously running as the DA presidential candidate – Zille says she told her the notion was “electoral nonsense”, unlawful and unconstitutional.

It’s clear that there is a personal sense of betrayal at stake for Zille as well as a political loss. At last week’s press conference, after all, both women had been at pains to play up their long history, foregrounding the childhood friendship of their sons. In a tweet on Monday, she referred to the DA as having seen through “duplicity”. When asked what the impact on the two women’s friendship would be, she replied simply: “Our personal friendship has taken a very bad knock.”

But however much the DA attempts to frame this as a matter of unforeseeable treachery by Mamphela Ramphele, the party still has a substantial amount of egg on its face. Zille and other DA leaders continually talk up the party’s democratic structures, its firm Constitution, its impressive internal “machinery”, and its unyielding commitment to due process. The parachuting in of Ramphele carries the general taint of flying in the face of all that, however much Zille insists that provision for such exceptional circumstances is well accounted for in terms of the party’s Constitution.

Although the DA’s top brass has stressed that the motion to welcome Ramphele passed with a “strong majority” at the party’s federal executive meeting, Zille has also made it clear that she takes personal ownership of the mistake, and that she pushed for Ramphele. “As the leader of the Democratic Alliance, I feel wholly responsible for what happened,” Zille wrote in a newsletter published on Monday. “Last Friday I met with the broader DA leadership at our Federal Executive to make the case of this merger”.

In an interview with Power FM on Monday, DA Eastern Cape leader Athol Trollip confirmed a Sunday Times report that he had voted against the motion to run Ramphele as the party’s presidential candidate. “We don’t often vote in our federal executive; in this case we did vote, and there was a two-thirds majority that endorsed that we offer her the presidential candidacy,” Trollip told Eusebius McKaiser. He explained that the majority of the federal executive was likely swayed by Zille’s “pushing”, since 2007, for a political realignment of opposition parties.

When asked why he had not voted in favour of the motion, Trollip spoke of his belief that politics was a long game; that you have to “work really hard at it”. If you belong to a party consistently framed as a white party, he said, your only hope of proving yourself to a wider (black) audience is through actions rather than words. “With time, you break down those barriers,” he said. “I don’t think short-term expedient decisions in politics serve any organisation well. They almost always backfire.”

Trollip, who is widely respected and also speaks fluent Xhosa, unsuccessfully ran against Zille for the party leadership in 2007, and lost to Zille’s favoured candidate Lindiwe Mazibuko in the contest for the party’s parliamentary leadership in 2011. His view is that the DA does not necessarily need a black leader to gain legitimacy. For all her talk of a non-racial political vision, the Ramphele fiasco makes it clear that Zille thinks the opposite.

Young black party leaders Lindiwe Mazibuko and Mmusi Maimane were on hand on Monday to express support for Zille’s leadership, with Maimane in particular waxing lyrical about Zille’s extension of opportunities to the likes of himself. Federal chairperson Wilmot James closed the press conference by sounding a decisive note about party unity and the need to forge ahead quickly. The DA is “Looking Forward”, they announced on social media throughout Monday. But the vision is surely a little more blurred than it was a week ago. DM