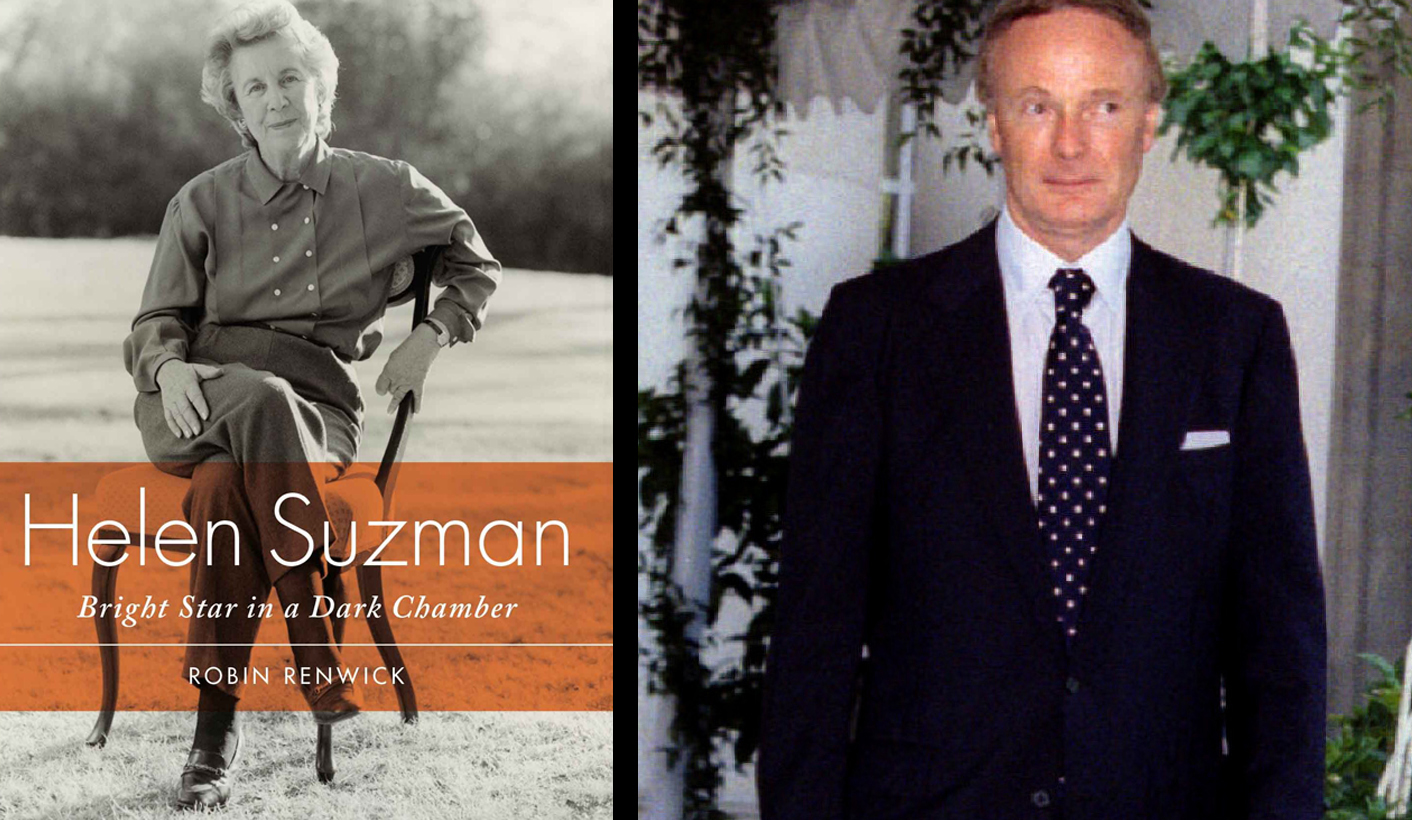 As the British ambassador to South Africa in the critical years 1989 to 1991, Sir Robert Renwick, shall we say, lubricated a number of political relationships. He has the privileged view of the connected insider, munching on an exiled Adelaide Tambo’s home-baked currant cake in Highgate, introducing Nelson Mandela to Margaret Thatcher and hanging out with some of the world’s most influential political players in a tumultuous epoch in South African history. Renwick has just written an engaging biography on the political life of his close friend and ally, Helen Suzman, who died five years ago this month. By MARIANNE THAMM.

It is mildly ironic that on the day Sir Robin Renwick was due to launch Helen Suzman – Bright Star in a Dark Chamber, his short biography of the veteran opposition politician at the Mount Nelson Hotel in Cape Town, news trickled in that Parliament’s portfolio committee on police had endorsed Robert McBride’s nomination to head the Independent Police Investigative Directorate (IPID).

It was Suzman and Renwick who had lobbied the former government to commute McBride’s death sentence (for bombing the “Why Not” Restaurant and Magoo’s Bar in Durban in 1986) to life imprisonment.

“Although not out of any enthusiasm for the individual concerned,” Renwick candidly qualifies later in the highly readable biography.

Loads of old friends were at the launch of the book, its title taken from Chief Albert Luthuli’s description of Suzman as “a bright star in a dark chamber” at “the Nellie” on Wednesday night. The choice of venue for the Cape Town launch speaks to the calibre of the associations and influential friendships Renwick forged during his time as ambassador to South Africa between the critical years 1989 to 1991 when the Apartheid edifice began to crumble and Nelson Mandela was released.

IFP leader, Mangosuthu Buthelezi, who once described Suzman as “having the mind of a man”, as well as newlyweds, DA leader Helen Zille and DA Presidential candidate, Mamphela Ramphele, were among the expected guests, as was veteran newsman, Allister Sparks, as well as Deputy President Kgalema Motlanthe.

Renwick, who has the forthright air of a man accustomed to dealing with the world’s powerful, is a great storyteller who casually makes his wide and deep circle of influential friends – many of them royalty or world leaders – seem like just a bunch of homies hanging together. His biography is a welcome addition to the continuing excavation and re-telling of the history of our most recent past.

He explains that he has written the biography not only because Suzman was a great friend and ally whom he admired, but also because it has been five years since her death and he had been surprised to discover during a visit that no one was writing about her and her legacy.

“I told her family that I would gladly do it as I wanted to pay tribute to her. What I was trying to do was write something accessible about her that was not difficult to read. She had written a great memoir in 1991, In No Uncertain Terms, and while I had enjoyed getting into the depth and intricacies of the legislation, a lot of people found it hard to read.”

Renwick was given access to Suzman’s extensive archive at Wits, which he says, “even for me who knew her very well, was an eye opener.”

The sheer volume of Suzman’s correspondence and responses was, he says, “unbelievable” and that the archive is, in fact, a “complete who’s who of the liberation movement” that she was trying to help.

“Apart from her Parliamentary work, her meticulous research and her ability to argue devastatingly against every single one of the laws that the Apartheid state promulgated, she answered every letter she got. In no case did she refuse to respond. In the case of people who were in detention, she not only tried to get them out but also tried to get family visits, access to books, libraries and in the case of long-term prisoners, distance degrees,” said Renwick.

Suzman accomplished all of this often without any administrative help.

Renwick’s biography briefly traces Suzman’s personal history before launching headlong into her extraordinary career as an MP for Houghton from 1953 to 1989 where she used the forum, at first as a lone voice, to speak out against the continuing injustices of Apartheid.

“You know I asked Stanley Uys (veteran journalist who died in London aged 92 on 12 January this year) what he thought of the book and he told me that it was not just about Helen but also about the rise and fall of Apartheid.”

And this is indeed the case. Renwick’s biography, while short at only 148 pages, is packed with information and reinforces Suzman’s extraordinary contribution towards the dismantling of Apartheid from within the belly of the beast itself. Apart from that it makes for an engaging and enlightening read, if only to re-visit the insanity of the minds that shaped the Apartheid ideology and state.

Around 20,000 mourners, many of them angry, had gathered to play their respects to Biko along with 12 Western diplomats, including the American ambassador. Biko’s brutal death in detention had marked a turning point in South African politics.

Renwick writes: “Helen Suzman attended the funeral with two of her Progressive Party colleagues, Alex Boraine and Zach de Beer. The field was sodden. As they tried to make their way toward the podium through the huge crowd, their passage was barred by a group of young men, one of whom told them in a very hostile manner ‘We don’t want you whites here.’ Helen said that they had come to pay their last respects to Steve Biko, but was told that she should go and talk to Vorster and Jimmy Kruger (the Minister of Justice, who infamously stated that Biko’s death ‘left him cold’). As the crowd hemmed them in, she became angry: ‘I’m Helen Suzman,’ she said, ‘and I’ve come to pay my respects to Steve Biko.’ ‘Who did you say you are?’ was the response. ‘I’m Helen Suzman.’ ‘You prove that.’ With difficulty, she managed to open her handbag and extract a credit card. At this stage she was told ‘Mrs Suzman, I beg your pardon. You may certainly go through.’ The crowd parted, causing Zach de Beer to say ‘Now I have seen everything.’”

Renwick writes that as Suzman reached the podium it collapsed.

His description of Suzman’s arrival at the funeral is, in retrospect, ripe with symbolism and metaphor. The angry crowd turning away white people, the bossy white woman fearlessly admonishing those who would dare to challenge her presence and then her final admittance to the scared space after brandishing a credit card, of all things. The collapsed platform is perhaps a symbol for the tiny but vocal minority who supported liberal politics. The vast majority of white South Africans did not, opting instead to vote for the Nationalists.

Renwick’s book attempts to explore the contested notion of liberalism in South Africa as well as unpack criticism. Professor David Welsh, Emeritus Professor of Southern African Studies at the University of Cape Town, in his tribute to Suzman in the 2006 collection, Opposing Voices, Liberalism and Opposition in South Africa Today, describes Suzman as “having a natural instinct for social justice. In the South African context she is a liberal, a broad category that covers all non-communists who opposed racial discrimination. In a more universal context, she can be classified as a social democrat.”

But Renwick prefers to describe Suzman as a hardcore liberal.

“She believed in the freedom of the press, an independent judiciary decency, all values contained in your constitution today. And these are values that Nelson Mandela subscribed to as well.”

It was Nadine Gordimer who noted that over the years many on the left had denigrated Helen Suzman as epitomisng the liberal stand they rejected. Later Gordimer wrote: “But over the years I have observed – that when people are in trouble, she has been the one they have appealed to. She is the one everyone trusted. To her house, where in this country of frightened people behind bolts and bars, her only security is a couple of lap dogs, people would turn up, sometimes late at night, in desperation when someone needed a passport and had been refused again, when someone was on the run or someone was detained in a place police would not reveal…Suzman never refused anyone her help, that I knew of. No matter how unpleasant or hostile the individual’s attitude to her and her political convictions had been. I don’t know exactly how to define this response.”

Helen Suzman has earned her place in South African history and her life and single-minded dedication to her ideals serve as an inspiration regardless of your political or ideological beliefs. Suzman, in the words of Theodore Rooseveldt, did what she could, where she was, with what she had. Renwick’s biography is a suitable tribute to an inspiring, formidable and fearless politician. DM