Egypt: Forget the revolution, can we have Mubarak back? 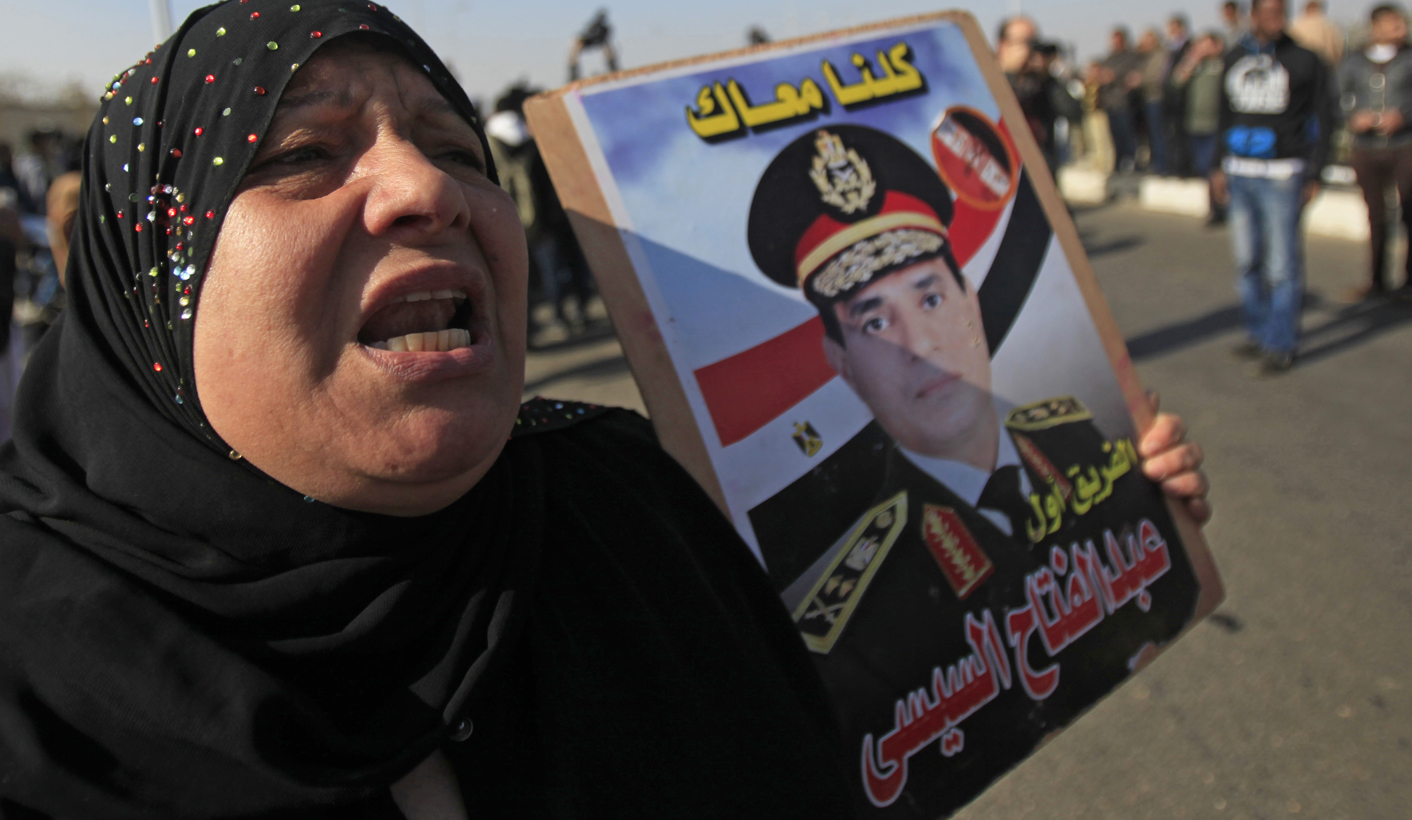 Current events in Egypt can’t help but inspire a nasty sense of déjà vu. As Field Marshal Abdel Fattah al-Sisi prepares for his coronation as president, the echoes of the old regime are too loud to ignore. Sisi is a man moulded in the image of Mubarak, and fluent in his authoritarian methods. His election will reset the clock on the revolution – and weary Egyptians might just be grateful for it. By SIMON ALLISON.

Endorsements are a vital feature of any election bid, and in Egypt, newly-promoted Field Marshal Abdel Fattah al-Sisi has the most significant endorsement of the lot. Last year, from his hospital bed in Sharm el-Sheikh, former President Hosni Mubarak gave his unconditional support to Sisi, describing him as “Egypt’s hope”, and the only person fit to take over Mubarak’s position.

You might think that, given the depth of the hatred Egyptians exhibited towards Mubarak in the heady days of the 2011 revolution, an endorsement from Mubarak is more hindrance than help. You’d be wrong. It’s been three years since Mubarak was unceremoniously booted out of office, and, well…Egyptians are starting to miss him.

In truth, it’s not Mubarak himself that’s inspiring all this nostalgia. He’s a nasty piece of work, and was never particularly popular to begin with (partly because unlike other in the region – Gaddafi, we’re looking at you – Mubarak avoided enforcing his own cult of personality).

Rather, it is the traits his regime brought to Egyptian daily life that are being missed: the stability, the predictability, the relative prosperity. Sure, it was a one-party authoritarian state; but it was also a place where bread was cheap, tourism brought in big bucks and no one was getting blown up on the streets of Cairo.

In Sisi, Egyptians think they have found someone who can bring that stability back. The military committee currently charged with ruling the country is convinced of it.

“[The Supreme Council of the Armed Forces] is looking forward with respect and reverence to the desire of the huge masses of the great Egyptian people in the nomination of…Abdel Fattah al-Sisi for the presidency of the republic, which it considers a mandate and an obligation,” the military high command said in a statement. The grammar is ambiguous: does Sisi have a mandate from the people, or do the people have an obligation to support Sisi? Either way, the end result is that Sisi has the official approval to run for the president in the next election – an election that everyone is convinced he will win.

“He is almost sure to win with Egyptians weary of turmoil unleashed by a pro-democracy uprising in 2011,” concluded Reuters, who generally refrain from all but the most certain of predictions.

Despite the support he currently enjoys, it’s doubtful that Sisi is exactly what those millions of activists gathered in Tahrir Square had in mind when they called for change.

For one thing, he’s a military man, and modern (post-monarchical) Egypt has only ever been ruled by military men. Gamal Abdel Nasser, Anwar Sadat, Mubarak: they were all high-ranking officers, and all relied on their military influence to stay in power. President Mohamed Morsi is the only head of state to buck this trend, but he only lasted a year, before being ousted in a coup (no surprises that the coup was organised spear-headed by the military).

For another, Sisi is no democrat. In his period in charge of Egypt (as head of the Supreme Council of the Armed Forces), he has moved ruthlessly to crush opposition to his rule. Specifically, he has targeted the Muslim Brotherhood and its supporters, despite them having won the only free and fair election in Egyptian history. Top leaders have been locked up in jail, and pro-Brotherhood rallies have been violently suppressed. The most extreme example of this came on August 14, when security forces opened fire on protest camps in Cairo. More than 200 people were killed that day, many in cold blood.

Despite this, Sisi has succeeded in bringing some measure of stability to the political process – mostly by dictating it, and shutting out dissenting voices. This has proved popular amongst the many Egyptians who are tired of political squabbles, and just want to move on with their lives. And internationally, his interim administration has been greeted with huge sighs of relief from nations as disparate as Israel, Saudi Arabia and the United States, all of whom rely on a strong, military-led Egypt to guarantee the fragile balance of power in the Middle East.

Both Saudi and the US have acknowledged this with massive cash payments (Saudi led a coalition of Gulf countries which pledged a $15 billion financial rescue package, while the US is unfreezing $1.5 billion in military aid). The cash is crucial to maintaining Egypt’s economy, which has been devastated by the political chaos of the last few years (a problem exacerbated the loss of billions of tourist dollars).

Sisi himself has yet to confirm that he will actually run for president (and elections are yet to be officially scheduled, although they are expected within the next few months). But he’s laying the groundwork for a campaign, and Egyptians looks set to welcome into office a man made in Mubarak’s image, and with the former dictator’s stamp of approval. So much for the revolution. DM

Photo: A supporter of Egypt’s army chief Field Marshal Abdel Fattah al-Sisi shouts slogans during a demonstration outside a police academy, where the trial of ousted Egyptian President Mohamed Mursi and members of the Muslim Brotherhood is due to take place, on the outskirts of Cairo January 28, 2014. Mursi went on trial on Tuesday on charges in connection with a mass jail break during the 2011 uprising, state television reported. Sisi is poised to launch a presidential bid in the upcoming elections. The poster reads: “All of us with you.” REUTERS/Amr Abdallah Dalsh