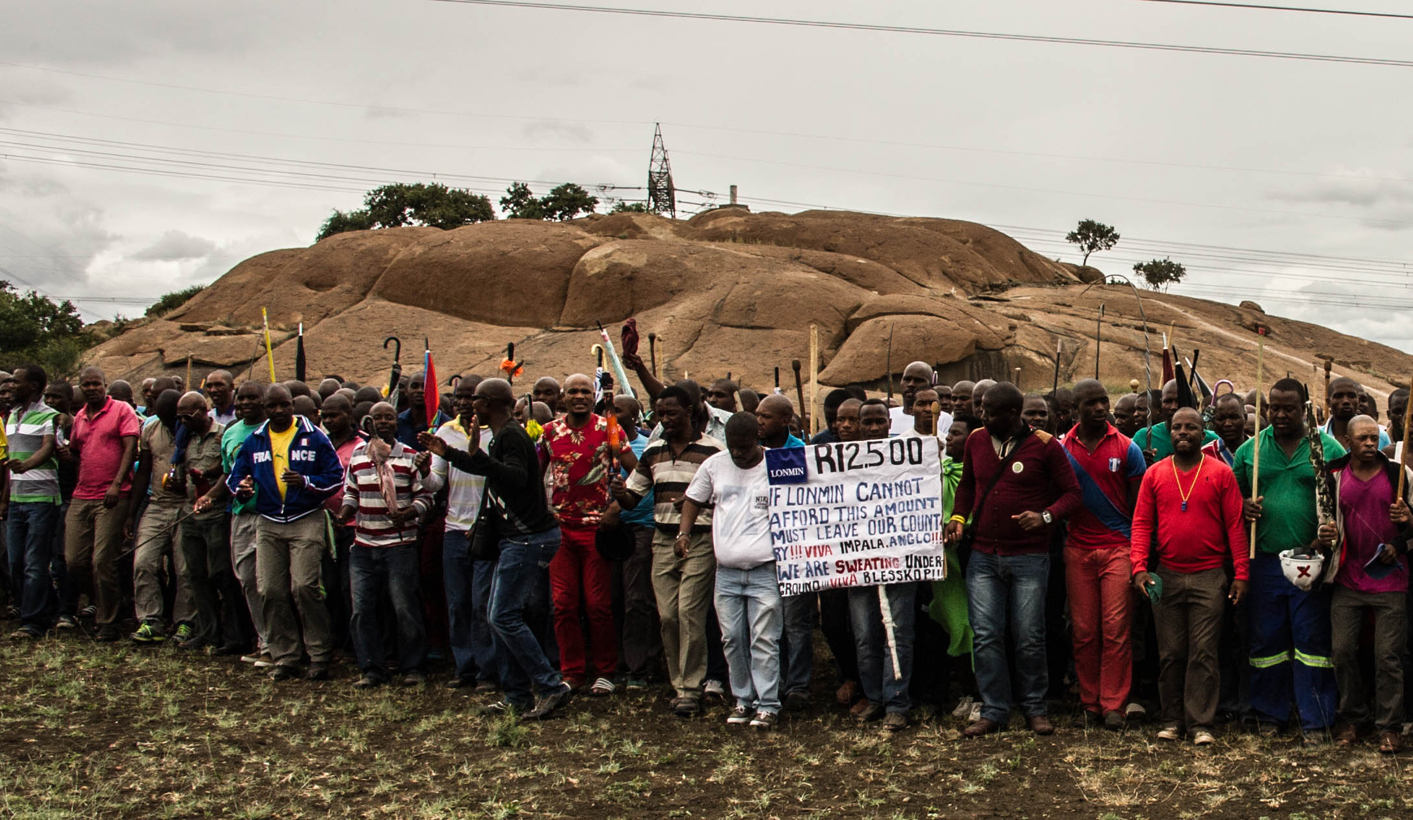 The Marikana Massacre strikes a deep chord amongst the workers in the platinum belt, currently on a protected strike at the world’s three biggest platinum producers – Lonmin, Anglo American Platinum (Amplats) and Impala Platinum (Implats). THAPELO LEKGOWA & GREG NICOLSON give an update on what could be a marathon strike for the Association of Mineworkers and Construction Union (AMCU).

“It is in our culture always to invite the ancestors in everything we do, especially here in Marikana, where the workers can never have an event without first introducing it to the mountain [the koppie]. This is the place where we were shot by the police and some of our brothers’ souls are still there.”

So said one of a group of workers marching from Marikana’s Wonderkop stadium, which is the central designated meeting point for striking mineworkers at Lonmin Platinum, to the koppie. That’s why they went on Monday, to honour the ancestors.

The infamous koppie is where workers gathered on 16 August, 2012, before they were mowed down by the police. After 10 people were killed leading up to the event, 34 people were fatally wounded that day. The koppie is an ancestral site for the workers of Marikana, especially for those who were there in 2012 when the shootings occurred. Emotions still run high when they think of intaba (the koppie), and the man in the green blanket, Comrade Mgcineni “Mambush” Noki.

On Monday, one man in the group marching to the koppie was spotted in a green blanket. He was dark, with rough hair, and he marched right in front of the other workers. When the journalists saw him, there was no way that we could not start a conversation around Mambush and what he stood for. For one of the journalists who had seen Mambush during the 2012 Marikana strike, soft words came out, “That was a man.” A believer in what he fought for. A man who loved workers so much that he gave his life.

One of the leaders (no one wanted to be named, as the striking miners were told not to speak to the media) addressed the workers, referring to the police: “We are not bothering anyone, nor do we wish to make your work difficult as the police, but this is something we have to do.”

“U vile uma si fika, kwa shaya u moya o bandayo,” he said, the emotion audible. It translates: “Did you feel the cold breeze as we entered the koppie?”

He added, “Basi vile” –  “They heard us”. Before leaving the koppie and marching back to the stadium, the group sang, “Nithi si xole kanjani?” or “How can we act peacefully?”

When the leaders had addressed their colleagues, they marched back to the stadium, peacefully but full of emotion. Workers had gathered at the Wonderkop stadium to get an update on the current wage negotiations taking place between AMCU and the three largest platinum producing mines – Impala, Amplats and Lonmin. Later into the day, workers were told to return home because there was not yet a solid report to give on the negotiations.

Some of the workers believe that the only reason the strikes are yet to become radical in nature is because participants still have some money after being paid last week. When it starts to run dry it might be a different ball game, they say. This will mean workers will now want results quickly, putting pressure on both the union leadership and the employers.

“The reality, my brother, is that we want to work. We want to get paid and we have bills to pay at the end of the month. You see, history has taught us that we never get what we want. We go on strike and still go back to the same old conditions. We are hopeful that AMCU will bring us different results than NUM [National Union of Mineworkers], especially that now we are negotiating in monetary terms [and] we are not talking percents. I can easily know how much will added into my pay and see it. Percents you don’t see, I tell you, my brother,” one of the workers said.

While looking on, it’s hard not to wonder whether the workers were simply wanting to hear that they had been awarded the “living wage” of R12,500, or if they would take a compromise negotiated by the union leaders.

Far away, at the Commission for Conciliation, Mediation and Arbitration (CCMA) in Pretoria, negotiations resumed on Monday. AMCU president Joseph Mathunjwa wasn’t there. Neither were the bosses of the platinum companies or top government leaders, who have committed to the issue.

So far, there have only been mild levels of intimidation – opposition unionists being prevented from going to work. The Rand continues to slide (more due to quantitative easing in the US than the strikes, say some analysts) and the current account deficit worsens. According to Bloomberg, the strike is costing Amplats 4,000 ounces of platinum a day; Impala 2,800 ounces. Lonmin is losing 3,100 ounces a day.

The economy is hurting, but so are the workers of Marikana, and their comrades across the platinum belt, who refuse to forget 2012. AMCU is yet to show any sign of accepting anything below a minimum wage of R12,500 per month, and the union will be hesitant to take anything below the 9.5% its rival the NUM just won at Northam Platinum. Talks resume today at the CCMA, but we could be in for a strike as long as the Comrades. DM