What cricket fans can learn from the Coventry City protest 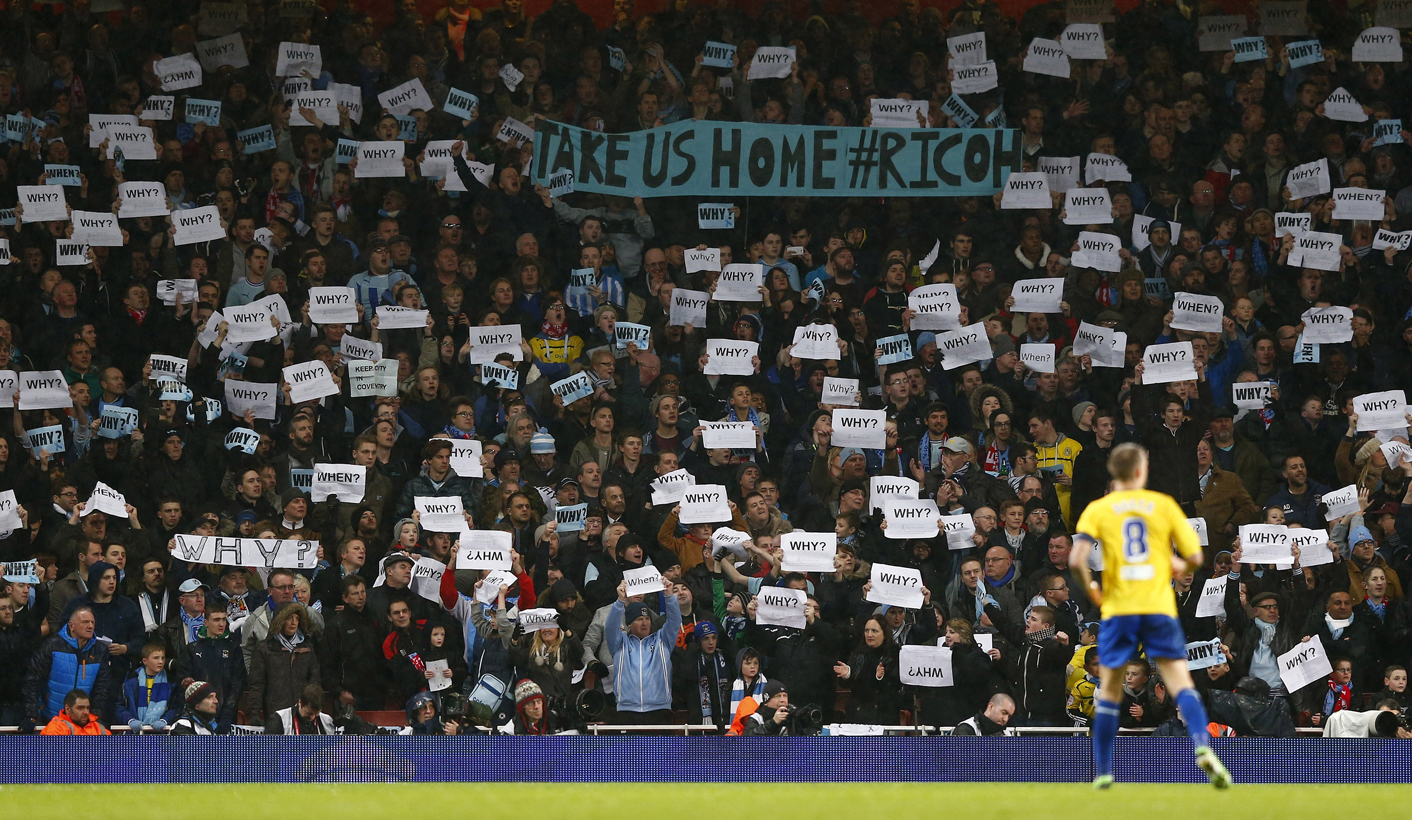 During Friday night’s FA Cup tie between Arsenal and Coventry City, the visiting fans launched a subtle protest which was very much supported by the home fans. Football supporters in England are a crafty bunch who are very curious about the running of their clubs. It’s about time cricket fans take a similar interest and start voicing their discontent about the way the game is governed. By ANTOINETTE MULLER.

Football fans in England, if you believe pop culture standards like Green Street Hooligans, are bad people. They want to go cause trouble wherever they go and heaven help the rival fans who cross their paths. It is true, of course, that pockets of hooligans exist who wander around for no other purpose than to cause trouble, but most of the time, the fans are actually quite docile.

Sometimes, opposing fans even come together to support a cause for the greater good. During Friday night’s FA Cup tie between Arsenal and Coventry City, two sets of fans supported each other in protest.

Coventry spent 34 years in the top flight but, like so many other teams taken over by people who haven’t got a clue what they’re doing, they’ve fallen from grace. On Friday, Coventry fans were opposing the current status of their club, where home games are being played outside of Coventry due to financial maladministration. Due to unpaid rent bills on a new stadium, Coventry are being forced to play their “home” matches, 35 miles away from home in Northampton. The protest at the Emirates formed part of the Keep Cov in Cov (KCIC) campaign which has been ongoing for some time. Organisers asked fans to take part in a two-prong placard protest. First they would hold up a sign with WHY? printed on it at the 35-minute mark, signifying the distance Coventry fans needed to travel for home games. The second placard with WHEN? would be held up at 61 minutes with the Sky Blue song being sung at the same time. The song was written by Jimmy Hill, who took over as manager of the club in 1961.

Bang on cue, the signs went up and the away end at the Emirates, which was packed with 5,500 Coventry fans and had been buzzing all night, turned into a reflective papier mache of protest. The Arsenal fans rose to their feet in applause, the Coventry fans returned the applause. Appreciation for support of a common cause echoed and reverberated around the stadium for over a minute as one set of supporters made their point loudly and clearly on a big stage.

It was a simple gesture, but it was one which mattered. Fans are the lifeblood of any sport. Without fans there will be no ticket sales and no eyeballs on TV and, as a result, nobody to sell the product to. Yet fans are far too often taken for granted. Their experience at the stadiums, on the TV and the way sport is presented to them is very rarely done for their benefit, but rather for the benefit of those in charge. Ranging from poor commentary and analysts to extortionate ticket prices – and, of course, more extreme problems like Coventry fans having to travel miles for their home games, fans are constantly kicked in the teeth.

Television coverage of sport, from football to soccer, often leaves much to be desired. Analysts and pundits are often lazy, misinformed, under-researched and, simply put, awful.

During Saturday’s clash between Bournemouth and Liverpool, Harry Redknapp failed to read a player’s name from a sheet. A name he should know since that is his job. Instead, he gave up and referred to the player in question as “the little South African boy”. That player was none other than South Africa’s Tokelo Rantie, who became a record signing for Bournemouth at the start of the season.

That’s one example out of many. Ask any disgruntled cricket fan how they feel about the majority of cricket commentators and chances are they’ll raise an eyebrow, shake their head and mutter obscenities. Fans take a backseat when it comes to decision-making, and while a protest is unlikely to lead to better commentary teams, it has a valuable role to play when it comes to the governance of the game.

Considering the current flux it is in with the position paper making the headlines for all the wrong reasons, a fan forum standing up against the powers that be could make a massive impact. Because cricket fans are generally disinterested in boardroom politics – it’s all rather boring – those in charge of the game far too often get away with things instead of being held accountable for it. While player associations fight for what’s right for the players, there is nobody to fight for what the fans deserve. Small action groups have had success in English football and regularly put pressure on administrators to ensure the game is governed better. There is no reason why cricket should not follow suit.

Just imagine a packed-out stadium for a one-day internationals between New Zealand and India all putting up posters asking WHY? Fans might not have a direct vote in the way the game is governed, but that does not mean their voices should be silenced. In fact, fans should be encouraged to speak out somewhere other than the internet in order to make their points, even if it is just a small group starting out. Slowly but surely this will make others aware of what is going on and sooner or later, more fans will realise: “Hey, we deserve better than this.”

Protests for fans of English teams occur regularly with a number of action groups representing different causes from different fans. Some Arsenal action groups might spring into action again very soon. Arsenal have been drawn at home in the next round of the FA Cup against Liverpool. Season ticket holders are likely to get the short end of the stick in this instance. Their tickets usually include some Champions League and some Cup games and the next round of the FA Cup was not originally included in their list of games. Instead, the home game in the Champions League against Bayern Munich was. However, those who crunch the numbers have suggested that season ticket holders will be relegated to the FA Cup tie and will have to fork out for the Champions League tie instead. That’s £62 for the privilege of a Champions League game which was originally included in their season ticket price. This is in direct contrast with Bayern Munich, who have actually subsidised some fans for the trip to North London. It’s unlikely that the season ticket holders will take this kind of treatment quietly. If this decision is made, expect some noise from the fans, because they know they deserve better.

Sport might be a business, but business owners should be held accountable for the way they treat their customers. Before they are held accountable, though, they first need to be told that what they are doing is not on. It’s time for cricket fans to do that. DM

Photo: Coventry City supporters hold up signs to protest the fact that they are playing their home games 35 miles away in Northampton, during the English FA Cup fourth round soccer match against Arsenal at The Emirates in London January 24, 2014. REUTERS/Andrew Winning.