Lagos: A city where you keep up or fall behind 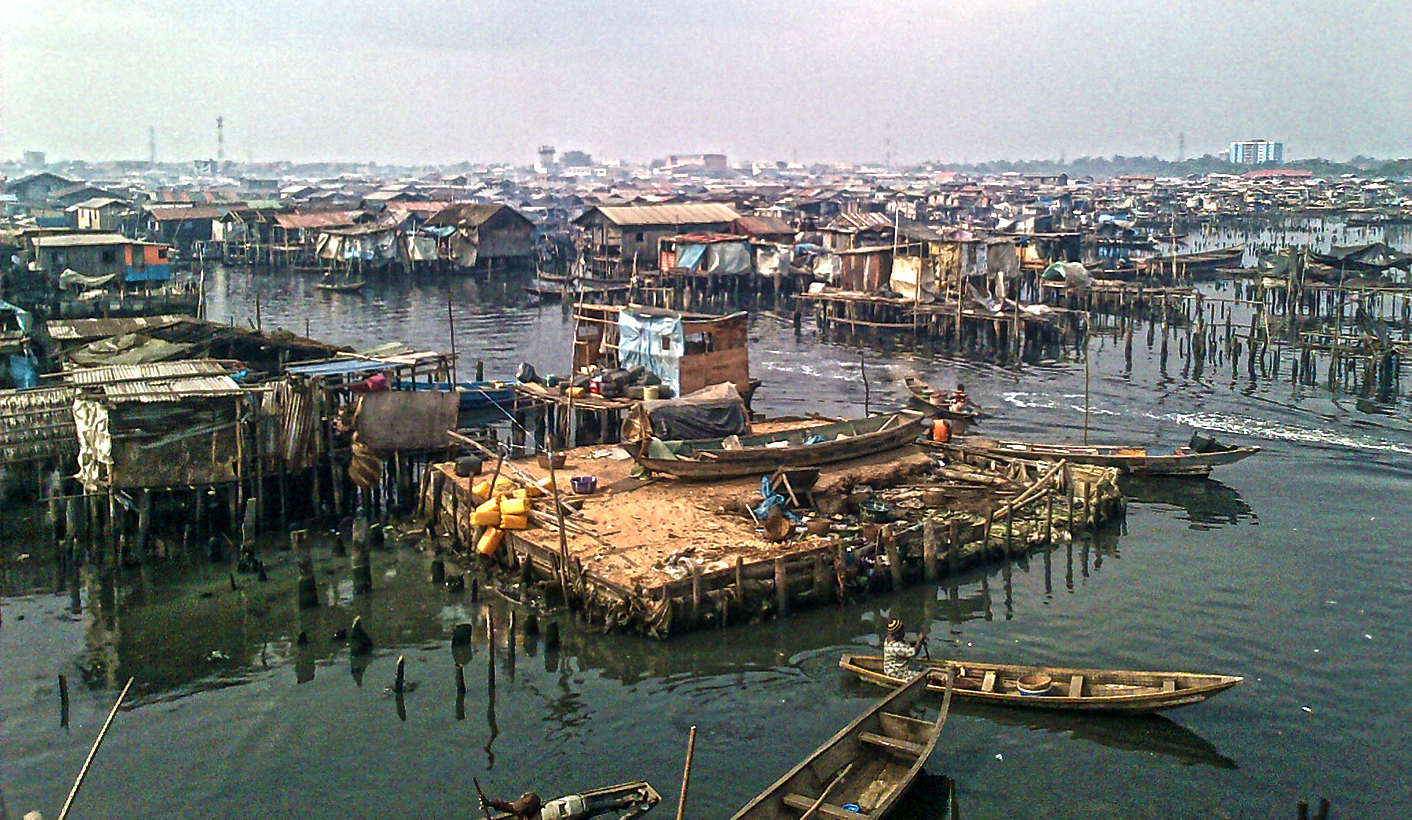 You fail to take Nigeria seriously at your peril. The country’s economy is tipped to take over from South Africa as the continent’s largest in the near future, with its annual growth rate more than three times that of South Africa. And it’s not just the economy growing: today, one African in four is a Nigerian. Nigeria’s population has grown by 268% in the last 50 years, to over 166 million today. Lagos, its biggest city, is said to be the seventh fastest-growing metropolis in the world. REBECCA DAVIS tried to wrap her head around it.

When you step out of the doors of Lagos’s Murtala Muhammed International Airport, two things strike you straight away. The first is the hair-curling humidity, day or night. The second is the sea of people waiting outside: brandishing signs, yelling, competing to attract visitors’ attention. Scams around airport pick-ups are legion, with tales circulating of fraudsters collecting new arrivals with tailor-made name placards and sweeping them off to be robbed blind. The airport’s ecosystem is a microcosm of Lagos itself: chaotic, loud, fast-moving and ready to take advantage of those who approach it unaware.

One of Lagos’s most prominent chroniclers in recent years has been the Nigerian-American writer Teju Cole, who lived in the city till he was 17. “What I feel each time I enter the country is not a panic, exactly,” he wrote in July last year. “It is rather a sense of fragility, of being more susceptible to accidents and incidents, as though some invisible veil of protection had been withdrawn, and fate, with all its hoarded hostility, could strike at any time.” On the visit he described, he was robbed at gunpoint in traffic while driving to his parents’ house.

Foreign visitors to Lagos are repeatedly warned to keep their wits about them. In smart hotels, there is a security presence on every floor, with hotel information booklets warning guests not to open their doors to unexpected visitors. These concerns are likely greatly overblown, in the manner of Johannesburg in the recent past, though there have been a number of high-profile armed kidnappings in the city in the last few years. The US State Department does warn, though, that Lagos still appears to be “the epicentre of identity-related and financial crimes”. It is not uncommon to see Lagos houses with words prominently painted on their exterior walls: “This house is not for sale. Beware 411” – a reference to the infamous Nigerian phishing scams.

To understand Nigeria, a Nigerian colleague suggested, it’s impossible to ignore the size of its population. When you have 166 million competitors scrambling for a size of the pie, you have to hustle. You do what it takes to get an edge. It’s a country, he said, whose huge size is matched by its population’s taste for life lived large: enormous cars, flashy outfits. Nigerians are notorious in international air travel for the amount of baggage that accompanies them. Ordinary, amiable conversations between two Lagosians can be mistaken by outsiders for aggressive shouting matches: the volume is seemingly always turned up.

From the air, Lagos looks incomprehensible: a conurbation sprawling in a fashion that appears untouched by town planning. It lies in the smallest state in Nigeria, but it has the highest population, with an upper estimate of 21 million inhabitants. Economic migrants pour into the city every day. The state website strikes a worried tone: “Lagos population is growing ten times faster than New York and Los Angeles with grave implications for urban sustainability”. One of the most obvious manifestations of the problem is found in its traffic: it’s not uncommon for residents to sit on the road for four hours. For rich Lagosians unwilling to face this headache, helicopter taxi services can be chartered to get them to the airport more speedily.

One of the government’s proposed solutions to the problem has been a Chinese-engineered light rail system, which has necessitated a controversial slum clearance initiative. “The [rail] project is behind schedule because there is barely a stretch of land on which someone isn’t living or trading,” Reuters noted in October last year. And where there isn’t any land to be had, people will find other solutions.

Makoko is a shanty-town in some respects not too different to those found in most of Africa’s urban centres. Nobody knows for certain how many people live there, because it was untouched by Nigeria’s latest census. Residents claim over a million inhabitants, but this is almost certainly exaggerated: other estimates range from between 80,000 to 250,000 dwellers. Up to 12 people share small wooden shacks. A wide range of enterprises offer everything from passport photos to a place to watch the latest UK Premier League match. But one factor sets Makoko apart from the rest of the continent’s sprawling townships: it is built entirely on water.

Makoko’s children can swim before they learn to walk. From the age of two, they are coached in steering three-metre wooden boats through narrow waterways between the shacks they call home, perched on wooden stilts. For the boat-less, there are more ad-hoc solutions: we spotted a girl of about six rapidly paddling a small plastic basin. Adults ply their trade on the water, rowing boats which serve as aquatic shops filled with everything from food and drink to sanitary pads.

Photo: Children are taught to punt boats in the style of Venetian gondoliers from a young age (Rebecca Davis)

Makoko, dubbed the Venice of Nigeria, makes for a surreal spectacle. Lagos fishing communities began living here in the 18th century. “The reason our forefathers chose this area is that it was attractive for their fishing,” explained local chief Francis Agoyon, addressing journalists from a boat while being punted to a newly-established floating school, built with foreign aid. The water is suitable for fishing no longer: oily black, it emits a pungent smell, and a thick layer of white scum gathers around the shack stilts. Residents are vague about the question of sanitation solutions, but the short answer appears to be that there are none. Waste from toilets and baths runs straight into the water they live on top of.

Water, water, everywhere, but not a drop to drink. Local entrepreneurs sell water from boreholes, and it’s the major expense for most locals. The government provides no free water to Makoko residents. Indeed, the government doesn’t want Makoko residents living there at all. The official line cites health and sanitation concerns, but some locals suspect that the underlying motivation is a desire to sell off the area lucratively to property developers. In July 2012, police entered Makoko and destroyed around 4,000 houses. When residents resisted, a local council leader was shot dead, and the police were called off.

As unappealing as life in Makoko may look to outsiders, residents say they are desperate to remain there. One local woman compared her removal from Makoko to taking a fish out of water. It’s an area where police rarely venture, but locals claim it is almost crime-free. “We are fishermen,” explained Chief Agoyon. “If we don’t live on water, we don’t have life.”

Makoko, a stubborn thorn in the government’s side, represents just one aspect of Lagos’s greatest challenge: the need to accommodate a spiralling and largely poor population while trying to turn Lagos into the kind of shiny, world-class metropolis to which investors will flock. “If you have nowhere to stay, then stay in your village. You can’t simply jump on a bus and come live under a bridge,” local planning commissioner Ben Akabueze, part of an administration which has been accused of neglecting the poor in favour of creating a city amenable to business, told Reuters recently.

It’s a problem that isn’t going away any time soon: some estimates place Lagos’s population at 35 million by 2025. The number of super-rich residents is growing too: a survey last year found that Lagos was ranked third – after Johannesburg and Cairo – in the African cities with the highest population of dollar millionaires. These new elites have no trouble spending their money. In 2013, seven Nigerian branches of Shoprite sold more Moet & Chandon champagne than Shoprite’s 600 South African stores combined. Nigeria is also the biggest market for Guinness outside Ireland.

But even in Lagos’s most prosperous suburbs – traditionally home to foreign diplomats, and increasingly to wealthy business people – infrastructure remains a problem. In Ikoyi, one such area, the frequency of power cuts makes Eskom seem a powerhouse of efficiency. Anyone who can afford it has their own generator, while the poor haemorrhage money on candles and paraffin. Nigeria’s enormous population represents its greatest potential and its greatest challenge, but will its economic growth see the lights go on for all, or only a few? DM

Rebecca Davis visited Lagos as part of a project run by the African Media Initiative.

Main photo: Makoko, the ‘Venice of Nigeria’, is a shanty-town built entirely on water. (Rebecca Davis)