Coming to a protest near you: The EFF revolution/roadshow continues 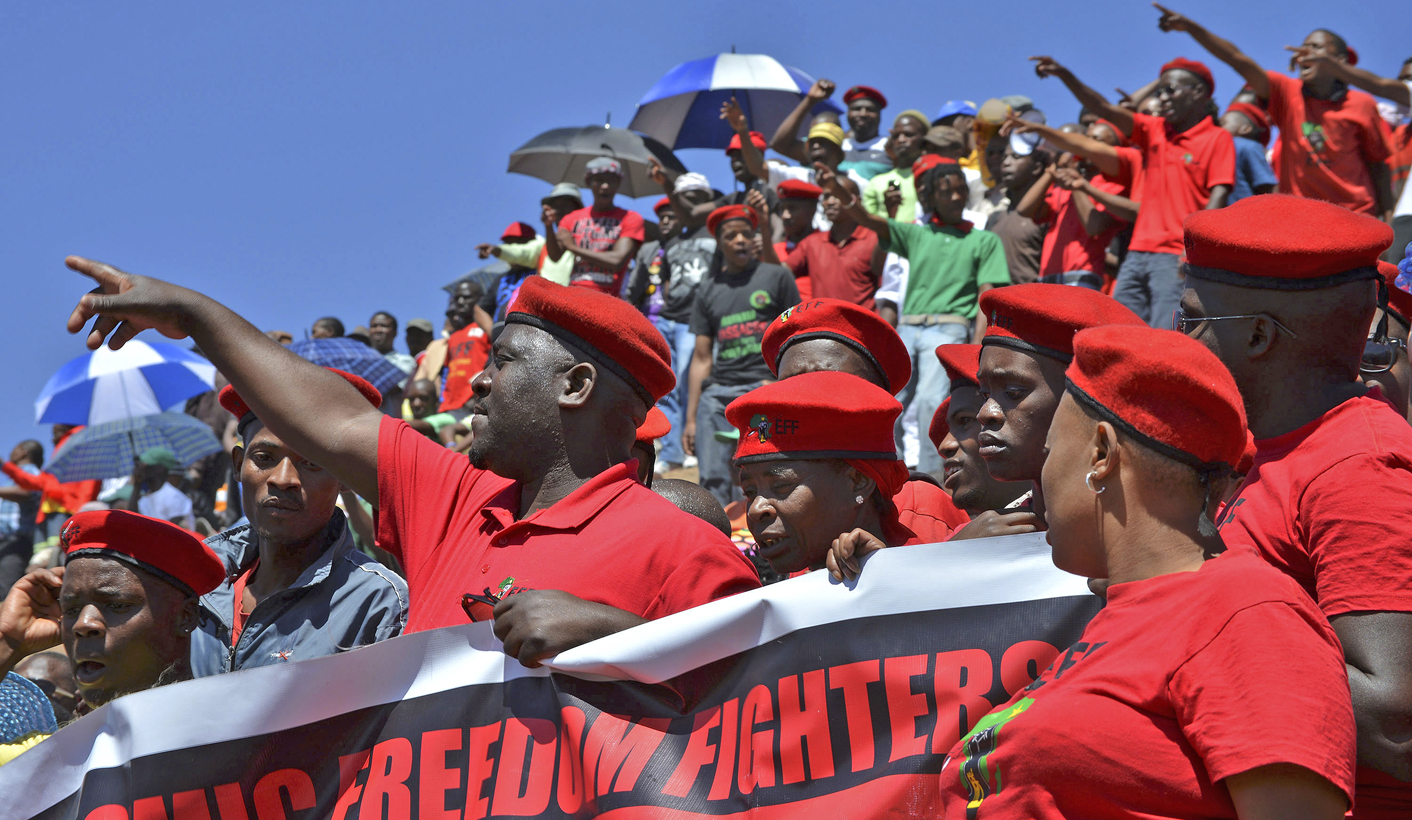 As protests continue to rage across the country, getting significant attention as we run up to the elections, the Economic Freedom Fighters (EFF) are following them faster than the Bang Bang Club. They want to be seen as the leaders of the New Struggle, and on the streets, no one does it so well. By GREG NICOLSON.

Toshifumi Fujimoto has a strange idea of a holiday. The 45-year-old Japanese truck driver gets a kick out of visiting war zones. Last year he snuck into Aleppo to follow the Free Syrian Army (posting his pictures on Facebook, of course). Before that, it was Yemen for the protests against the US government. He was in Cairo after the overthrow of Hosni Mubarak and dreams of spending time with the Taliban in Afghanistan. “It fascinates me, and I enjoy it,” says the war tourist.

Julius Malema’s band of fiery young leaders might be able to relate.

Almost every day there’s a protest somewhere in South Africa and recent reports suggest they are increasing in number and intensity as we travel towards the 2014 election. The EFF are never far behind, often arriving while communities are in the midst of burning tires and vowing not to sleep until they realise one or another of the liberties featured in the Bill of Rights.

Protests have a special place in SA politics. If there are any moving moments in last year’s Long Walk to Freedom, it’s when the crowds mass and sing struggle songs, lionising ANC leaders and vowing to continue the fight. That war was against Apartheid and the battles most venerated are those fought by the people, armed with rocks and Molotov cocktails against the guns of the armed forces.

After 20 years in power, the ANC has done an incredible job in claiming The Struggle. It claims almost blanket responsibility for the victory against Apartheid and exploits its legacy at the polls. Remember the mass uprisings, the many sacrifices, when we kept singing for freedom despite the police breathing down our necks? That was us. Vote ANC.

The protests haven’t stopped; they’re just more localised, disjointed and leaderless. It’s become what Zwelinzima Vavi calls a potential “ring of fire” – pockets of anger and frustration that if focused could lead to widespread violence moving from the townships to the docile suburbs and aloof commercial hubs.

Since his rise to fame, Malema has been used and feared as a ringmaster, the populist radical who could light all the fires of  “economic freedom” at once in pursuit of revolution. The EFF’s founding manifesto is clear on what it thinks is going on. Because of continuing poverty and inequality, “Service delivery protests will intensify and workplace stoppages on the mines and on farms will also continue in higher volumes than before, thus worsening the economic crisis South Africa is experiencing. Mineworkers will become more militant and will fight struggles for their economic survival.” It adds, “We should be on their side.”

The EFF’s march to the Madibeng Municipality, responsible for water shortages in Mothotlung, where four people were allegedly killed by a harsh crackdown by police on a protest, positions the party on the side of the people. The red berets are doing the same thing around the country. They arrive at a protest, try to assert their leadership, facilitate a solution or lead a march. Sometimes they’re accepted; sometimes they’re sent away. Often enough, they make headlines demonising the ANC’s poor service delivery. They’re in pictures with hundreds of supporters and community members.

In contrast, another contender, the Democratic Alliance, doesn’t get nearly as much attention or support from their visits to the hot spots. If they arrive and happen to be accepted, they inspect the problem; they speak to some of the residents and address the media. Yet they seem distant. They lack the EFF’s violent rhetoric. They pass too quickly and do too little. Essentially, they fail to mobilise the community en masse to further challenge the state.

The EFF’s approach has its pitfalls. The media reported on Sunday that S’thandiwe Hlongwane, the recipient of an Nkandla house Malema handed over in a political middle finger to the ANC, is not destitute as the party claimed. Sunday Times said she is married to a government employee on R250,000 who owns two other properties. (The EFF denied it was misled and said Hlongwane was in a relationship with the man, not married, and regardless, her kids were sleeping on the floor of a mud house before they came along.)

But the party is trying to set itself up as the vanguard of the new Struggle, to be associated with the songs, rocks and tires of the poor, while usurping the fighting legacy of the ANC. It’s about getting voters onside and convincing them Malema’s troops really are ready to die for economic freedom. Being at the right place at the right time is the first step, and no one else does it so well.

If EFF’s revolution does happen, Fujimoto just might have a really good cause to visit SA. DM

Photo: Supporters of the Economic Freedom Fighters (EFF) gather during the official launch of the political party in Marikana, October 13, 2013. REUTERS/Mujahid Safodien