Russia says Ukraine may spin out of control 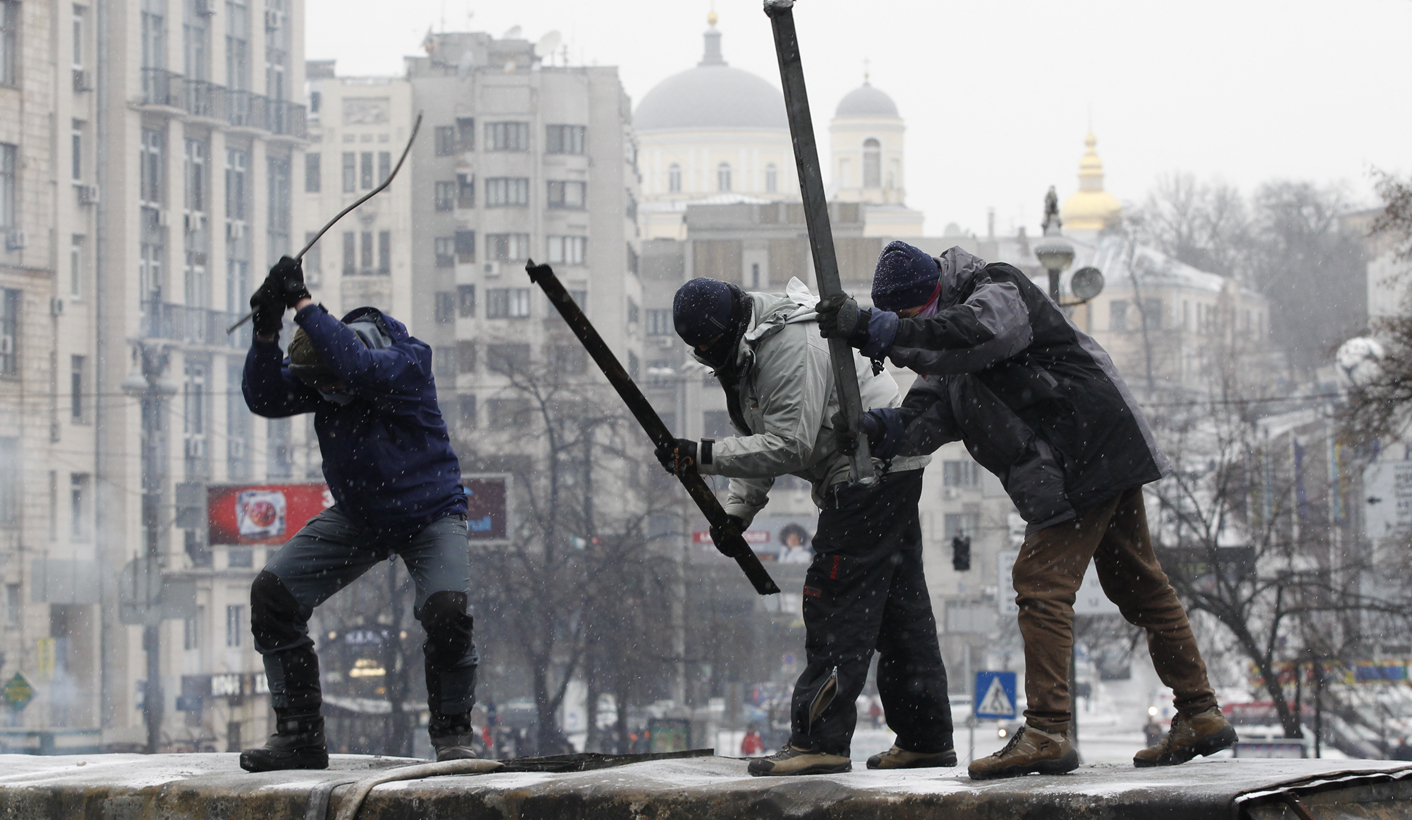 Russia told European governments on Tuesday to stop meddling in Ukraine's political crisis and said events could be spinning out of control in Kiev after violence that left vehicles burning in the streets. By Steve Gutterman and Pavel Polityuk.

Moscow, which sees its fellow former Soviet republic as part of its traditional sphere of influence, has watched nervously as protests against President Viktor Yanukovich’s decision to shun a trade pact with the European Union have turned violent.

Scores of police and demonstrators have been hurt since Yanukovich, who received a multi-billion-dollar bailout package from Moscow after he spurned the EU deal, angered opponents by signing sweeping laws to curb public protests.

Criticising “members of certain European governments” for visiting the protesters in Kiev, Russian Foreign Minister Sergei Lavrov said: “We would prefer that some of our European colleagues refrained from acting unceremoniously over the Ukrainian crisis.

“It is just distasteful,” he said, adding that such action had helped encourage the protests.

Lavrov criticised the protesters for using “violence, attacks on police, arson, Molotov cocktails and explosive devices” and he called their behaviour a “complete violation of all European standards of behaviour”.

Russian state television has been repeatedly showing footage of the clashes and what appears to be protesters smashing the windows of a bus, underlining the case for the tough legislation and police action to curb violence.

“I personally think that these calls for prudence, which the leaders of the opposition and Vitaly Klitschko in particular are now making, show that the situation is spinning out of control,” Lavrov said.

Ukrainian Prime Minister Mykola Azarov said in an interview with Russian state broadcaster Russia 24 the government would use force if clashes in Kiev do not cease.

“If the provocateurs do not stop, then the authorities will have no other choice but to use force under the law to protect our people,” said Azarov.

One of Lavrov’s deputies, Grigory Karasin, spoke by telephone with a Ukrainian deputy foreign minister on Tuesday and expressed “concern about provocative actions by radical opposition forces”, the Russian Foreign Ministry said.

It said Russia supported a Ukrainian statement that promised the government would do all it can to resolve the situation peacefully through dialogue – a pledge some opposition protesters suspect was a bid to buy time.

“We are waiting to see what these talks produce, but there’s little hope. Yanukovich is pretending he does not see us or hear us,” said Vasyl Somkovych, 30, a protester from the region of Ivano-Frankivsk in largely pro-European western Ukraine.

In Kiev, a presidential aide ruled out the declaration of a state of emergency to quell the unrest.

Asked by a journalist if the presidency was considering such a step, Andriy Klyuev, secretary of the National Council of Security and Defence, said: “There will be no declaration of a state of emergency.”

On Tuesday, 2,000-3,000 protesters faced about 1,000 police in central Kiev, where Reuters reporters saw nine burnt-out buses and trucks, smoke wafting from some of the tyres.

Cobblestones were strewn across a main street where violence erupted on Sunday. Priests were among people walking in an area between a police line and a protesters’ barricade.

Police periodically beat their shields with truncheons and constantly boomed out warnings to protesters through megaphones.

“We will act according to the situation,” said Sergei, 45, a protester from western Ukraine. “If the OMON (riot police) attack, we will respond with full force.” DM

Photo: Demonstrators beat on a burnt vehicle as pro-European integration protesters hold a rally in Kiev January 21, 2014. Russian Foreign Minister Sergei Lavrov urged European governments on Tuesday not to interfere in Ukraine’s political crisis and expressed concern that events in Kiev could be spinning out of control. REUTERS/Vasily Fedosenko