Malema and Buthelezi: A wily bond, forged behind enemy lines 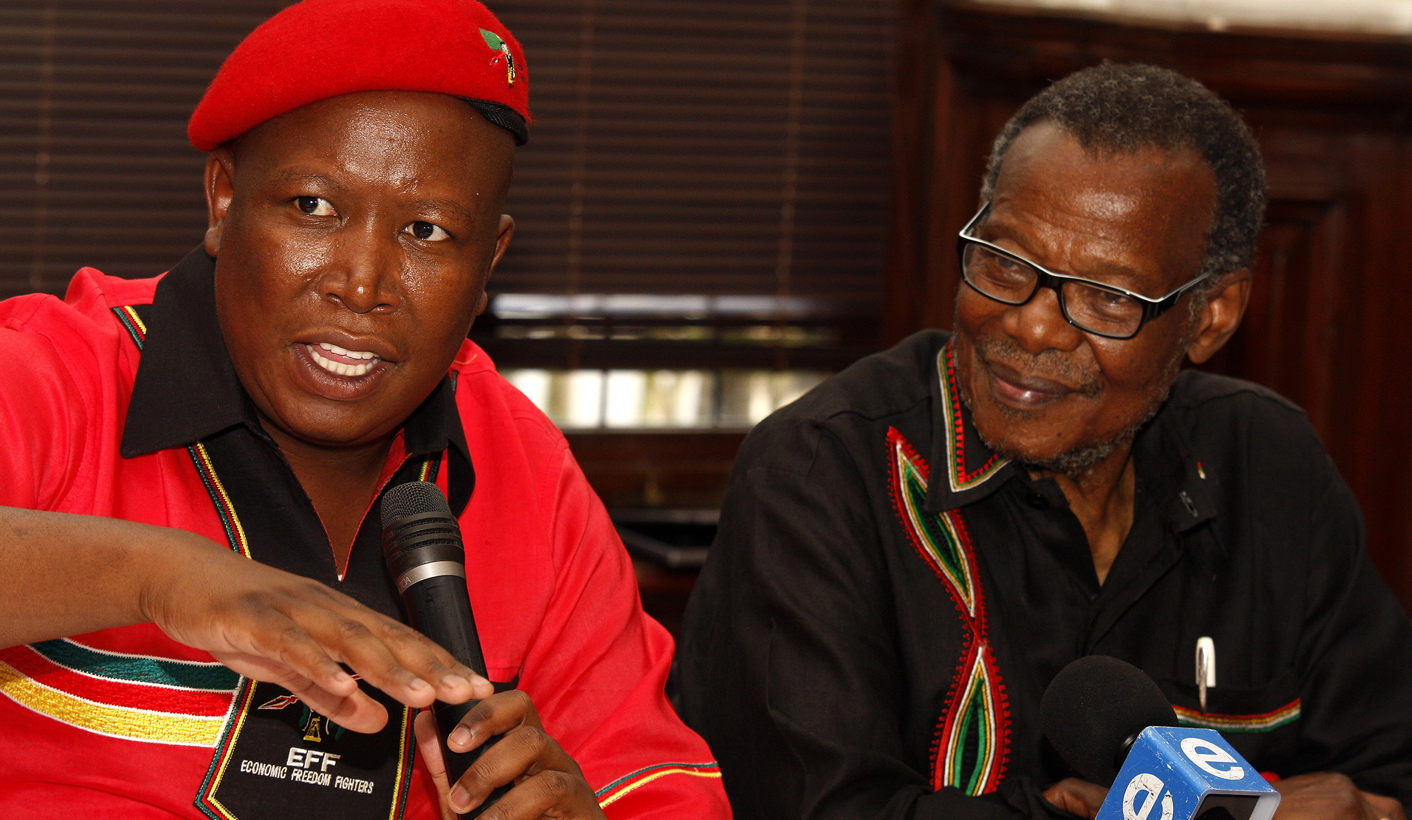 On the face of it, it seems incomprehensible what Julius Malema’s seven-month-old Economic Freedom Fighters and the 40-year-old Inkatha Freedom Party, still under its founding president Mangosuthu Buthelezi, would want from each other. Malema and Buthelezi have in the past been quite blunt about their mutual distaste. The cessation of hostilities now might be to forge a non-aggression pact on the campaign trail and ensure peaceful co-existence after the election. It also means that an attack force is lining up against the ANC. By RANJENI MUNUSAMY.

The Inkatha Freedom Party (IFP) and Economic Freedom Fighters (EFF) have little in common – though the two leaders share a penchant for humiliating journalists who ask them uncomfortable questions. Mangosuthu Buthelezi and Julius Malema also both cut their political teeth in the ANC Youth League and went on to form their own political parties. Ideologically though, their parties are diametrically opposed. The IFP is a conservative party which ascribes to a federalist structure of government. The EFF has positioned itself as a leftist party professing radical economic policies, the centrepiece of which is nationalisation. The middle point between the two on the political spectrum is the ANC – which is where neither want to be.

When Malema was the ANC’s stalking horse, he attacked Buthelezi in a way no one else in the party would dare. When the IFP went into a government of national unity with the ANC in 1994, the two parties became respectful of each other in public, even though the resentment was ever prevalent. The ANC and IFP were ostensibly at war for almost two decades, with violence in KwaZulu-Natal continuing into the late nineties when they signed a peace pact.

When Nelson Mandela was president, he tried his best to pacify the then cantankerous Buthelezi, who was still a significant player on the political scene. No event went by without Buthelezi giving commentary about it – in his inimitable style and heady choice of words. While some ANC leaders would challenge and criticise the IFP president, they tried not to attack or demean him as this would have had deadly consequences in KwaZulu-Natal’s violence hotspots.

In 1999, the ANC tried to make a deal with the IFP which would have seen Buthelezi become President Thabo Mbeki’s deputy in exchange for the IFP surrendering the premiership of KwaZulu-Natal to the ANC. Had Buthelezi accepted the deal, the IFP would probably have disintegrated faster than it has in recent years. As it turned out, Buthelezi rejected the deal, wanting to hold on to his support base in KwaZulu-Natal by retaining control of the provincial government.

Five years later, in 2004, the ANC won control of the province and thus began the IFP’s rapid decline. The ANC targeted delivery projects strategically in IFP strongholds and the absence of terror and violence meant IFP supporters were no longer dependent on the party for protection. Many become depoliticised and settled into normal lives. This unravelled the IFP’s campaign machinery and support base.

In the 2009 election, there was a new factor in KwaZulu-Natal: Jacob Zuma. In his campaign to fight the criminal charges against him and later to become president, Zuma was able to rally support across party lines in the province. As a result, even areas that were previously no-go zones for the ANC became its playground.

Malema, the ANC Youth League president, was deployed to campaign in Nongoma in Northern KwaZulu-Natal, the scene of violence during previous elections and one of the IFP’s solid strongholds. He felt no need to exercise restraint and went for the jugular, saying he would even recruit members of Buthelezi’s family into the ANC. Buthelezi hit back, saying Malema was “no more than an ill-bred brat whose behaviour is not only un-African, but crude by the standards of any culture in the world”.

The ANC won the province with 62.9% of the vote, while the IFP only received 22.4% of the vote. Two years later, ahead of the local government election, Malema went back to twist the knife, this time at Msinga in the KwaZulu-Natal midlands.

“There is no democracy in the IFP … an old man who is refusing to go on retirement even when he is sick wants to die president of the IFP,” Malema said, telling supporters that Buthelezi suffered from “unoshukela” (the common term for diabetes in isiZulu).

“The IFP is no longer a strong force in the region and we are positive that we will do very well in this entire region, we are reclaiming KwaZulu-Natal which is the home of the ANC.”

By then, Buthelezi had mellowed substantially. His response was that Malema had no business meddling in IFP business and that his statements were the sign of a child who had not been properly raised from an early age.

After all this, it was curious why the two would suddenly want to bring their respective parties into a meeting to discuss co-operation. Malema apologised for all his “unfortunate remarks” about Buthelezi in the past, and this was “wholehearted[ly] accepted” by the IFP leadership, according to a joint statement after the meeting. The IFP acknowledged that the apology “reflect[ed] the maturity that defines the EFF’s approach to the electoral politics of South Africa”.

The leaders said at media conference that their two-hour meeting was not about forging an alliance, acknowledging that there were “fundamental differences between the two organisations”.

So what was it in aid of, then?

The EFF is the new player on the campaign trail and KwaZulu-Natal is the one province where it might experience problems. Its members and supporters are proving to be quite aggressive in their campaigning and this might prove dangerous in a former warzone. But a non-aggression pact with the IFP means that there is less potential for violence on the campaign trail and the only real enemy will be the ANC.

Malema also mapped his game plan in the Western Cape this past weekend, discounting the ANC as a force to be reckoned with, and lining up to do battle with the Democratic Alliance (DA). With no experience and little resources, it is a smart move by Malema to define his targets so as not to waste his resources fighting everyone everywhere.

Buthelezi’s interest is to win back KwaZulu-Natal and he knows this is virtually impossible as long as Zuma remains ANC president. He is now 85 years old and unable to lead his party with the vigour he used to. His reluctance to hand over the reins means that there is no succession planning in the party and therefore no heavy hitters have been groomed to follow in his footsteps.

Malema is the new Buthelezi of South African politics. He can hit hard and draw blood – in a way no one else can. Buthelezi recognises this. He needs someone who can rattle cages in KwaZulu-Natal, and Malema and his supporters can certainly do that. Together they cannot win back KwaZulu-Natal but they can definitely make it difficult for the ANC to wipe the floor again.

The real value of their newfound friendship could emerge after the election. Post election coalitions to break the ANC’s dominance might become necessary and it would therefore be handy if previous hostilities were set aside. Opposition parties in Parliament have already co-operated on numerous issues during this term, including the proposed motion of no confidence in President Jacob Zuma and the Protection of State Information Bill. Malema will be the new player in Parliament in the next term, and while he and the DA might be uncomfortable bedfellows, it would be smart for him to forge relationships now that will be useful in future.

The IFP is already part of another strange five-party alliance that was formed recently, calling itself the Collective for Democracy. The other parties which make up the alliance are the African Christian Democratic Party (ACDP), the Congress of the People (Cope), the Freedom Front Plus (FF Plus) and the United Christian Democratic Party (UCDP). These parties also have very little in common ideologically. The alliance probably means they will stay out of each other’s way on the campaign trail and look to co-operating post the elections.

The EFF would balk at the thought of co-operating with a party like the FF Plus, but in order to line up against the ANC and make life difficult for its representatives in Parliament, the unthinkable might just happen. And Malema can now count on his new friends in the IFP to do the introductions.

The 2014 elections will be a game where anything can happen and nothing is impossible. DM