The Krejcir effect – yet too much humour defangs this Richard III, the stage’s baddest-ass serial killer 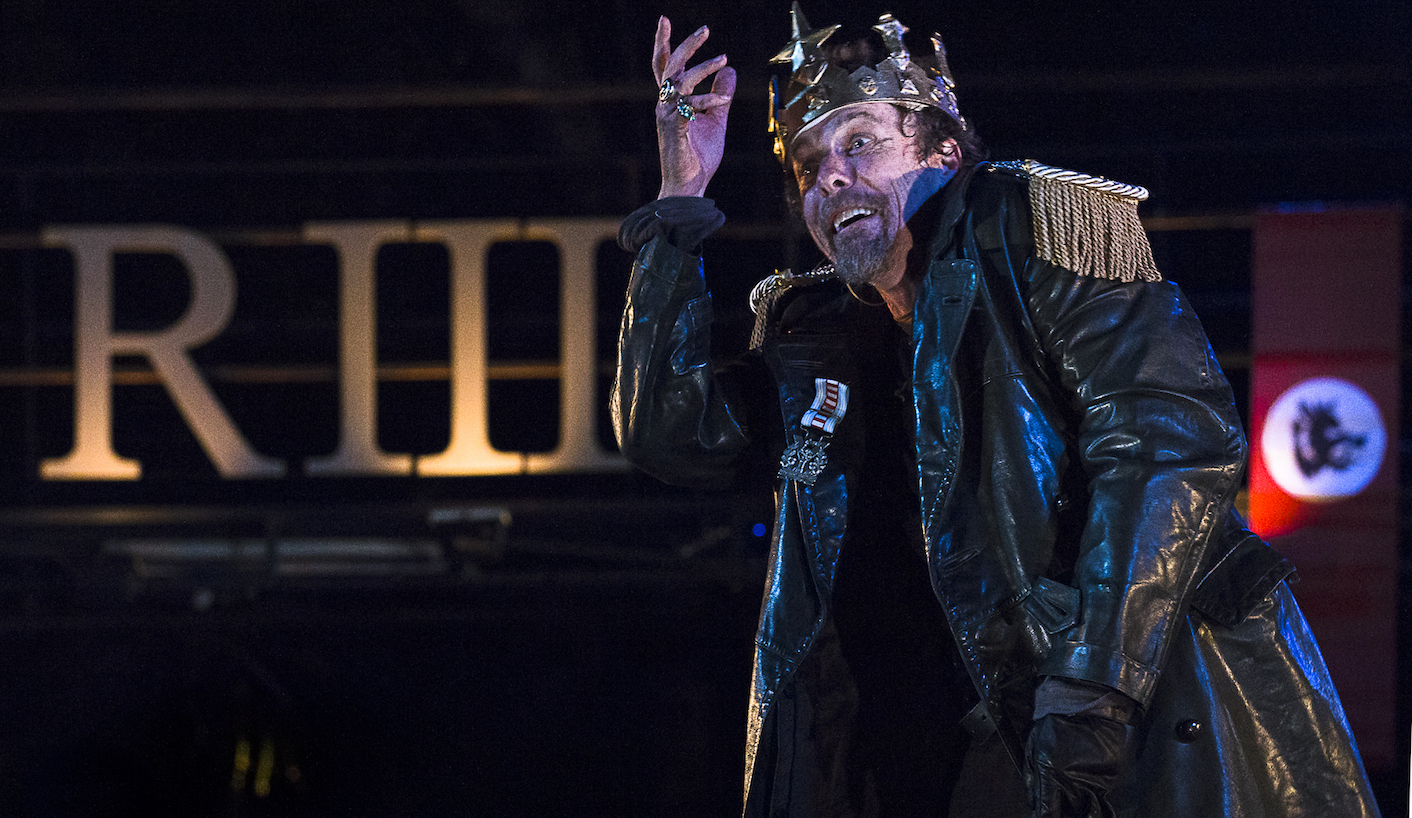 Before Norman Bates, Dr Hannibal Lector and Dexter - three of the most compelling fictional psychopathic serial killers in English-speaking popular culture - there was the baddest-ass mass killer of them all, Shakespeare’s Richard III, currently strutting the stage at the Maynardville open-air theatre in Cape Town. By MARIANNE THAMM.

Richard III is the English-speaking world’s fictional prototypical psychopath and serial killer. The Tragedy of King Richard, one of the young Shakespeare’s early dramas and the last of his English History Plays, is a brilliant excavation of narcissism, criminal power, ambition, cruelty and self-loathing.

And while we might today be tempted to seek deep and meaningful significance in Shakespeare’s eloquent and playful text, the drama is, on one level, simply a gore-fest of note not unlike the Sopranos or Dexter.

If the Duke of Gloucester (Richard’s title before he claims the throne over a pile of around 15 bodies, beating the 12 that are linked to Radovan Krejcir) had lived in contemporary Jo’Burg or Cape Town, newspaper headlines about his violent rampage in reaching the pinnacle of power might read:

“Man on crutches in diabolical plot to kill brother, nephews and in-laws.”

Or simply in the tabloids; “Motherfucker wins election.”

The Duke of Gloucester’s carefully calibrated election campaign is what drives the body count in this drama (or should we say melodrama), a classic study of hubris and nemesis.

“Plots I have laid, inductions dangerous, by drunken prophecies, libels, and dreams, to set my brother Clarence and the king in deadly hate the one against the other.”

Point is, Shakespeare’s genius is that he knows the entire world loves a villain, especially one as charming and silver-tongued as this one. So sure is Shakespeare that Richard III (in spite of his misshapen body) will beguile us that he has him talking to us, confiding to us directly like an old friend in asides.

Just like Dexter, the protagonist of the hugely popular American crime thriller television series, Richard makes of us accomplices and confidantes. He allows us, right until the end, to eavesdrop on his turbulent, dark, yet disturbingly witty inner thoughts and feelings. We become guilty by association and horrifyingly find ourselves liking this “bottled spider”; this “abortive rooting hog”.

Richard’s sense of humour, which is evident throughout the play, has the quality of hurt and it is this vein that the director of this production, Lara Bye, appears to have chosen to mine, perhaps a little too much as it ultimately overshadows the “tragedy” of the title.

In her programme note to this first staging of The Tragedy of Richard III at the open-air theatre Maynardville, in Wynberg, Bye refers to “the incredible contemporary relevance of this play…during the 10 days of mourning for Nelson Mandela – on qualities of good leadership, sacrifice, corruption, factions and greed.”

But while the cast and director might have found themselves swept up in the tides of history so soon after Nelson Mandela’s death, a few months later, the statesman’s passing is merely incidental here.

Lara Bye is a gifted and hugely versatile (and very busy) director who has, of late, turned her considerable talents to opera, including for the Richard Wagner Society of South Africa. As much as Bye is able to turn her heart, mind and eye to the “big” spaces required of opera, she is also able to bring to life the claustrophobic layers in small, intimate pieces like the award-wining, two-hander by Nicholas Spagnoletti, London Road, and Dael Orlandersmith’s Yellowman. Bye not only pays great attention to detail and extracting the best from her casts, the spaces in which she operates are seldom simply incidental to the overall look, feel and experience of her work.

But this time round there is no real Lara Bye “stamp” apart from the finely-tuned performances she has wrangled from a large and versatile cast including theatre luminaries such as Warrick Grier (Duke of Gloucester), Nicky Rebello (brilliant in a variety of roles including Clarence, King Edward, Lord Mayor and Bishop of Ely), the mesmerising Faniswa Yisa (Queen Margaret), Jennifer Steyn (a searing Queen Elizabeth), Daniel Richards (superb as the avenging Richmond) and various others, all of whom deliver highly watchable performances.

Many directors of Shakespeare at Maynardville, Cape Town’s annual cultural, outdoor, commercial prostration to Shakespeare, attempt to update or rather dress up the texts, injecting popular and contemporary references or settings, from Kung Fu to whatever might be popular on TV or in film at the time.

Bye, perhaps eager to follow the pack, says this production is inspired by the series Game of Thrones (in terms of styling), Japanese “street fashion” and “steam punk”.

Perhaps because Game of Thrones might in turn be inspired by Shakespeare’s original dramas, the costumes here (by Reza Levy) seem quite conventionally Shakespearean (although beautiful and appropriately dark).

No one expects the annual Maynardville production of Shakespeare to push any boundaries or break any new ground. Every year it proves to be a more or less expected offering.

There will be no surprises. You will not see a thrilling King Lear like the one directed by Guy De Lancey in 2012 in which he forced his cast to perform (or was it suffer?), sometimes naked on a stage of simple gravel.

(After all, it is hoped that these Maynardville productions will attract school children in their droves. In fact, in previous years the selection of the play depended on that year’s set work at school.)

Maynardville and the annual Shakespeare is contested terrain in Cape Town. There have been grumblings for years that certain theatre “cliques” hold too much sway and control and that the selection of which Shakespeare is to be performed is closed and not transparent. Matters came to a controversial head last year after criticism of serial director Roy Sargeant’s version of Cardenio.

Be that as it may, Bye has found herself working in an environment that only allows for limited flexibility not only in terms of the physical outdoor stage, but also in terms of the expected audience. And she has made the best of these circumstances with a brooding and menacing design by Willem Breyl and a tragedy that never dares to step into the real vile and bitter psychological depths of the text.

And now on to the core of the matter.

Several of the world’s greatest actors have inhabited Richard III, the villain we love to hate. Warrick Grier is a versatile, veteran South African actor. He has a long and distinguished career in stage, television and international film. Grier is one of those rare actors who is a shape shifter, who is able to shed his own skin and to BE the part he is playing rather than ACT it.

His Richard, wearing the classic black and hobbling with a crutch and calipers, is more Mr-Bean-meets-Hannibal-Lecter than savage and frightening serial killer. The trick is to find just the right register of humour (Shakespeare’s script is full of it) and terrifying menace (the man has killed around 15 people, after all).

As Grier settles into the part, we become accustomed to his embodiment of the killer, but in the end the actor does not supply us with enough insight or traction into the seething self-loathing that partially drives this ambitious and ruthless character.

Also, Bye has chosen to render some of Richard’s victims – including the two princes (Richard’s nephews and contenders to the throne) dispatched to the Tower of London before they are murdered – so ridiculous, we completely understand why their uncle should have them killed. And while this scene is s turning point in the play, it does not translate as such in this production.

It is in the dream sequence, where the ghosts of Richard’s dastardly deeds come to haunt him, that we are drawn finally into the dank and dark corridors of Richard’s mind. When this happens on stage some members of the opening night audience laughed – evidence of a lack of empathy for the protagonist or a view of him as a comic rather than tragic figure.

The Tragedy of Richard III is not performed often. It is a long play that requires commitment, but Bye has ensured an engaging pace and time passes quickly. This is not a flawless production of Shakespeare’s tragedy – its touch is a tad too light – but it is one that certainly offers enough great entertainment to warrant a view. DM

The Tragedy of Richard III is on at Maynardville until February 22. For times and dates go to http://www.maynardville.co.za/pages/index.php