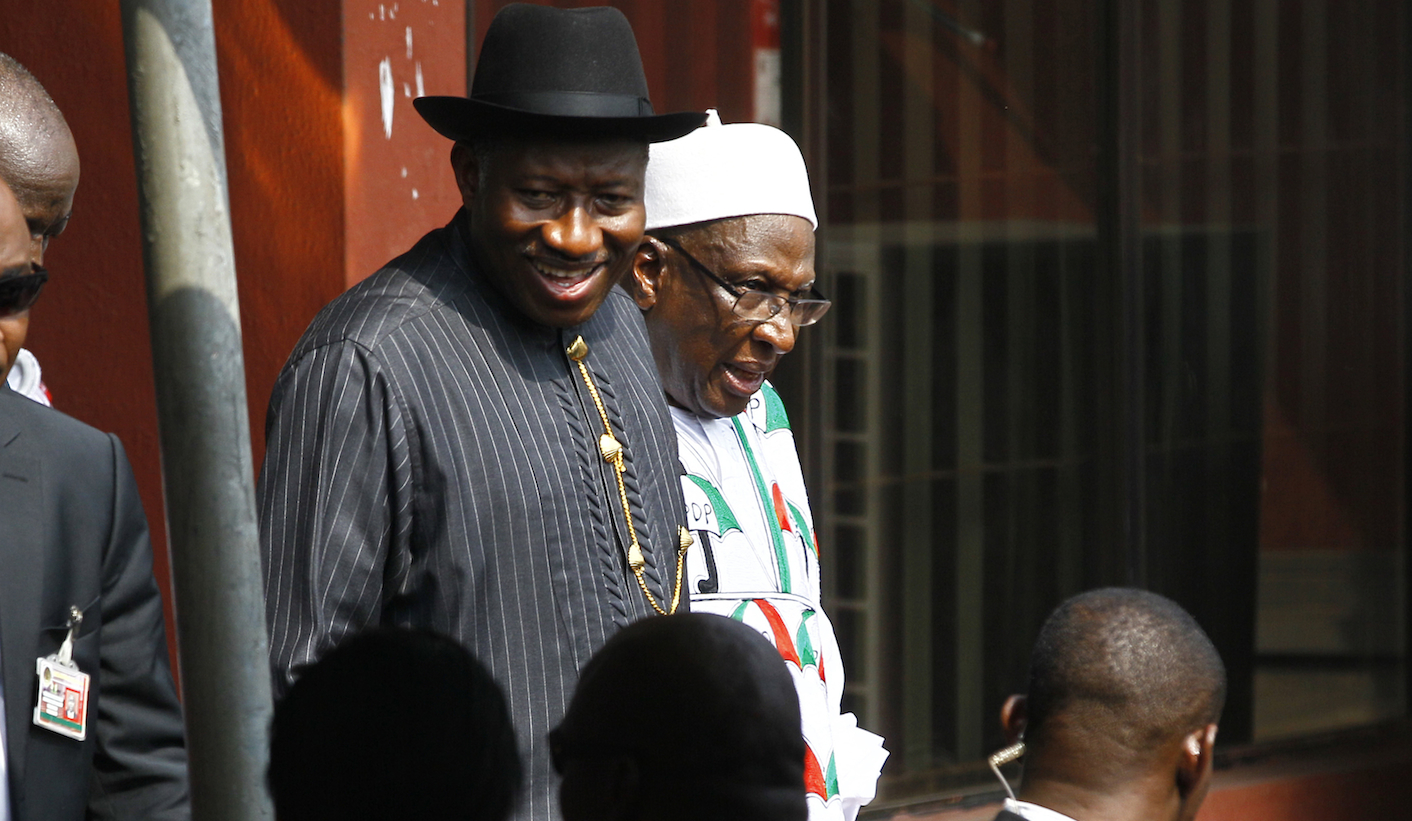 In the past month, both Nigeria and Uganda have come under the spotlight for their passing of severe anti-gay legislation. On Monday, Nigerian president Goodluck Jonathan signed a bill that carries a sentence of up to 14 years imprisonment for same-sex marriages or civil unions. Any person who is openly gay and anyone who “registers, operates or participates in gay clubs, societies and organisations” can be sentenced for up to 10 years in prison (the law also applies to well-meaning foreigners who visit Nigeria to help promote LGBTI causes). By HALEY MCEWEN.

The developments have been condemned by Western governments and have predictably sparked outrage amongst many people in South Africa. Purse-string holding countries in the north have threatened to withdraw millions of dollars in aid for the enactment of these laws, with Germany having already withdrawn aid from Uganda, citing the law as a main concern. While some may say that this is a useful strategy in protecting LGBTI rights in Africa, this is also a problematic response that draws on colonial-era assumptions of Western superiority.

These “progressive” responses, like their conservative counterparts, assert and assume the legitimacy of the West to dictate to African people and countries, furthering the idea that it is in the best interest of African people to do as the West instructs.

Disappointingly, many commentators on the airwaves and in social media have asked a question that usually goes something like – “Why is it that African countries are banning homosexuality when other parts of the (‘developed’) world are in the processes of legalising it?” This question feeds into discourses that arose during colonialism, and which still circulate today, of African “backwardness”. We should therefore be highly suspicious of this question and the responses it prompts.

And the arguments that either a) agree with the laws or b) say that Nigerian and Ugandan governments must be allowed to make their own decisions simply perpetuate ignorance on the topic. The homophobic attitudes supporting the laws are violent, dangerous, and terrifying in terms of the future of sexual politics. And, in this context, the argument that countries like Uganda and Nigeria must have the freedom to make their own decisions is correct, but misleading. In reality, Uganda and Nigeria have not passed these laws alone, or without influence from the West.

In order to understand the anti-gay and anti-feminist legislation that is developing across the continent (Burundi, Cameroon, Tanzania are on the paths taken by Uganda and Nigeria), we must also understand the ways in which the American Christian Right, and its neo-liberal supporters, are shaping and nurturing the anti-gay laws that countries like Uganda and Nigeria are making. American evangelist Scott Lively (Author of The Pink Swastika: Homosexuality in the Nazi Party, which blames the holocaust on gays) has been sued by Sexual Minorities Uganda for crimes against humanity for his influential involvement in the “kill the gays” bill.

Scott Lively is not the only one – there are many well-resourced US based organisations that are building inroads into African sexual politics. Rev. Kapya Kaoma’s Colonizing African Values: How the U.S. CR is Transforming Sexual Politics in Africa is a useful introduction to how the US Christian Right is working successfully to drive the homophobic and anti-feminist “Family Values” agenda in Africa. For those who are unfamiliar with the Christian Right – this is an American movement of conservative Christians who promote Christian worldviews in politics, and the belief in the superiority of the nuclear family as the fundamental unit of society. This means that for the Christian Right, any sex that occurs outside the institution of heterosexual marriage is considered dangerous for children, families, economies, and nations. For the Christian Right, morality begins, rather than ends, with imposing one’s values and views upon others, and with great consequence.

And, while the political alignments of the groups and individuals promoting this legislation are conservative and Christian, this is not an issue that is only about Christianity, or religion. Some commentators, in condemning the laws, blame Sharia Law and Islamic fundamentalism, especially in Nigeria. However, as Kaoma and others have made clear, Islam and Sharia law are not nearly as invested in “Family Values” as American Christians.

While his report is useful and important, what Kaoma doesn’t mention or recognise is that Family Values organisations are themselves supported by, and linked to, conservative advocacy organisations. For instance, one of the most influential conservative think tanks in the US, The Heritage Foundation, supports the Howard Centre for Family, Religion, and Society, an organisation that develops and disseminates conservative knowledge on the “natural family”.

The Heritage Foundation states as its mission that it wants to “formulate and promote conservative public policies based on the principles of free enterprise, limited government, individual freedom, traditional American values, and a strong national defence”. The Heritage Foundation also took a leading role in the conservative movement during the Reagan presidency and has continued to have a significant influence in US public policy making.

Meanwhile, the Howard Center for Family, Religion and Society was founded by John A. Howard who, along with World Congress of Families (a project of the Howard Center) founder, Alan Carlson, co-founded The Rockford Institute, a neo-liberal think- tank based in Rockford, Illinois, twenty years earlier in 1976.

Thus, the question commentators and the public should be asking is really, “Why is it that US conservative groups are promoting homophobic laws in Africa?” In asking this question, it is most important to consider what is at stake for these groups, and the power relations enabling their maneuvers across the continent. For instance, why is it that Family Watch International founder, Sharon Slater, was a) put on a platform at the Nigerian Bar Association in 2011, and b) warned delegates about the dangers of “sexual rights” being promoted by Western progressives? And, even more worryingly, what is at stake in her pushing of the view that “it doesn’t matter if they are heterosexual, homosexual, premarital or extramarital – the evidence shows that as sexual relations stray from marriage the family unit disintegrates, children are hurt, economies decline, and nations are weakened”?

The FPI was a backer of the recently tabled White Paper on Families, which as Tanya Charles reports, is indicative of the increasing conservatism in South African public policy. Charles concludes that the White Paper promotes a heteronormative value system, carrying the possibility that that access to state resources (in the form of social grants) could become dependent on whether one’s family fits into narrow, heterosexist definitions of “family”.

Other examples of how the Christian Right is operating in South Africa include the Christian African Network (CAN), which is affiliated with US organising body, the International Church Council Project. CAN founder, Peter Hammond, also co-authored The Pink Agenda: Sexual Revolution in South Africa and the Ruin of the Family. American organisation Focus on the Family also has an office in Durban.

Debates and discussion on Family Values and the growth of homophobic and antifeminist legislation will only become more prolific. In thinking through the issues, and in considering how to respond, commentators must take the mobilisation of the Christian Right in Africa into serious account. Ignorance, which is not capable of countering these anti-gay laws, will abound, should we not take into account the role of conservative Christian groups. There have already been a number of arrests of people who are reportedly gay in Nigeria and Uganda, meaning that there is no time to waste in getting our facts straight. DM

Haley McEwen is originally from Michigan and is currently a PhD student at the University of the Witwatersrand. She lives in Johannesburg and is also Research Coordinator at the Wits Centre for Diversity Studies.