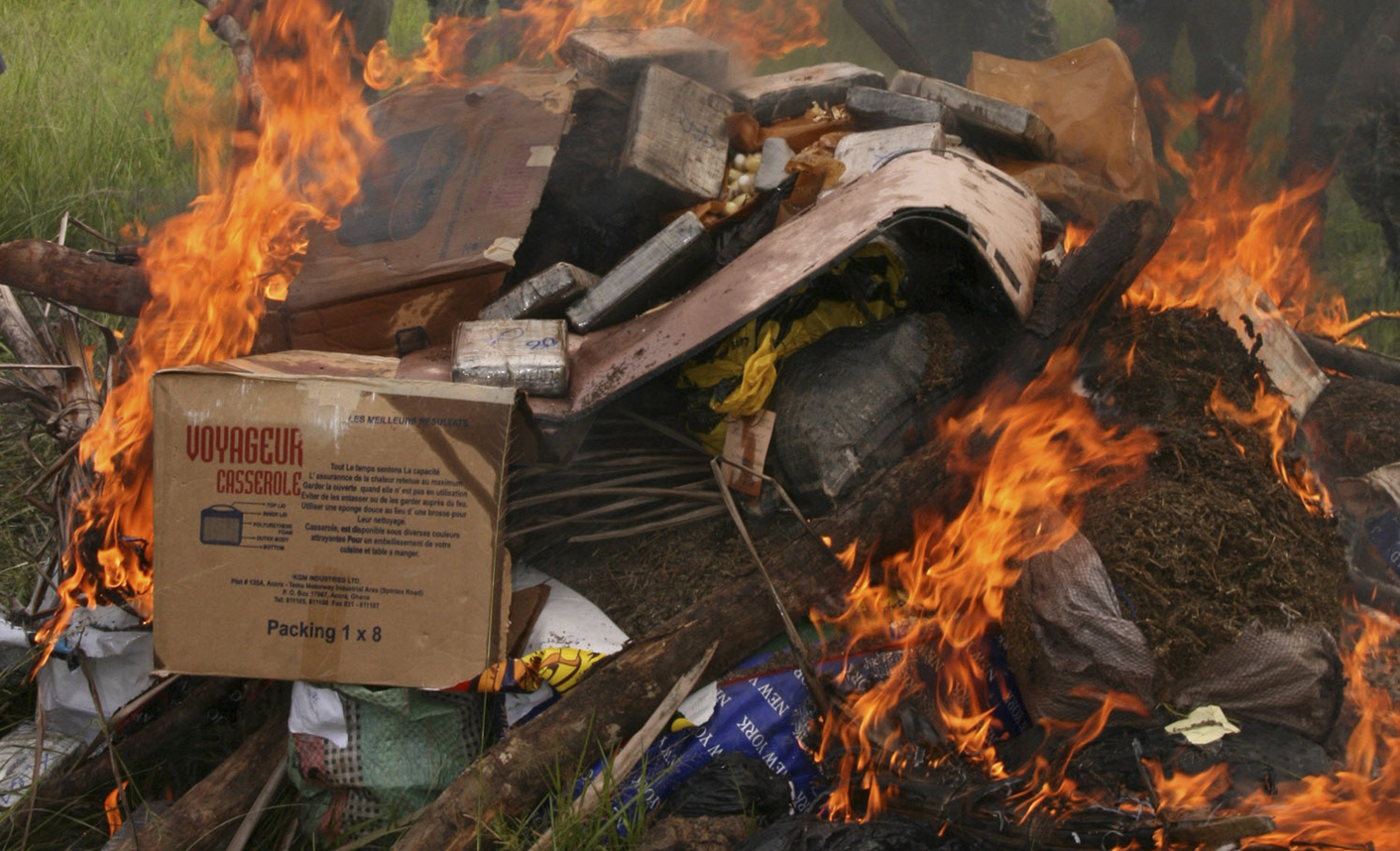 In South America, the war on drugs has failed, judging by the trail of dead bodies and countries destabilised by the drug syndicate wars, against each other and against the police. Yet, as drug smugglers expand their horizons, West Africa is being targeted with the same old rhetoric and policies – with potentially devastating consequences. By SIMON ALLISON.

West Africa has a drug problem. As demand for hard drugs, particularly cocaine, increases in Europe, South American drug traffickers are utilising smuggling routes through the region, taking advantage of its generally lax law enforcement, endemic corruption and geographical proximity to all those Europeans in need of a chemical fix.

It is a particularly good place to be a drug trafficker, according to Antonio Maria Costa, the former head of the United Nations Office on Drugs and Crime. “Drug planes don’t have to fly below the radar, because in most cases there is no radar (or electricity). Soldiers sometimes help smugglers by closing airports and unloading the cargo. Police cars run out of gas when giving chase or are left in the dust by smugglers’ all-terrain vehicles… Traffickers are seldom brought to trial; in some cases, there are no prisons to put them in,” Costa told the Washington Post in 2008.

Since then, not much has changed. If anything, even more drugs are being smuggled through West Africa’s ports and deserts – at least according to drug enforcement officials and concerned NGOs.

“The West African route has been exploited for a long time, but what we’ve witnessed in the last decade is an increase in the volume of the drug passing through the region as transnational drug cartels collaborate with local criminal and smuggling networks, corrupt officials and terrorists to transport their goods to Europe and North America. The traditional routes are being policed more heavily, so the traffickers find alternatives,” said Adeolu Ogunrombi, head of the West African Commission on Drugs, speaking to Vice magazine last year. Ogunrombi also warned that hard drug use was on the rise among West Africans themselves, with Nigeria in particular reporting high levels of cocaine use.

Despite the dire warnings, however, it’s hard to determine exactly how many drugs pass through the region, or how many are used by its citizens. Drug smugglers don’t exactly share the details of their trade, and other indicators of consumption – such as public surveys, or data on drug injections are scarce or unavailable. Much of the evidence for increased drug trafficking and drug use comes from data on drug seizures. This data is inherently unreliable.

“It is very inadvisable if not impossible to judge drug trafficking trends on the basis of seizure data alone,” warns a new report from Swansea University’s Global Drug Policy Observatory. Often, drug seizures are less about the volume of drugs being smuggled and more about the efficiency (and motivation) of law enforcement officials. “Judging year-to-year trafficking trends from seizure data assumes that interdiction activity of the police is constant or at least similar from year to year. It is difficult to see how that assumption can be justified in West Africa, given the many influences on levels of interdiction activity, including varying degrees of resource availability and changing levels of corruption.”

The report, entitled Telling the story of drugs in West Africa: The newest front in a losing war?, raises fears that these unreliable statistics are being used to justify solutions which are potentially even more dangerous.

“West Africa may find itself in a situation in which the depiction of its drug situation is greatly influenced by shifts in the global ‘drug war’ that are beyond the control of West African states…Thus, while Latin America in the coming years may be less friendly to the US drug control apparatus’ heavy presence, US authorities can transfer the same rationale and the same expensive military and surveillance hardware to Africa.”

In particular, the report’s authors are concerned that mistakes made in prosecuting the War on Drugs in South America will be repeated in West Africa.

In an email interview with the Daily Maverick, co-author Joanne Csete clarified what these concerns are.

“We don’t know of any measure by which the “war on drugs” in Latin America could be judged to be a success. Production of cocaine and cannabis have not declined, prices of drugs are at historic lows, drugs are purer than ever, and drug-related violence and corruption are rampant.  There is a strong consensus from economists, criminal justice experts and now even sitting heads of state in the region that there is a serious need for rethinking this unsuccessful approach.”

And yet already there are signs that the same militarised, prohibitionist, US-led strategy is being pushed onto West Africa. “The West Africa Cooperative Security Initiative (WACSI), one of the US’ main counter-narcotics programs in Africa, seems to mimic the Latin American experience and was presented to the US Congress as growing out of the US experience in the Americas.  Drug enforcement agents on the ground and security sector reform, including technical assistance for surveillance and interdiction, are part of foreign assistance programs from the US and other donors in the region.  Some of these activities will undoubtedly help increase capacity for drug seizures at various times, but experience from across the world shows that drug markets will simply find new routes and new ways to thrive elsewhere.

“Our concerns are that (1) the record of failure of these measures is not recognized as countries are pressured into accepting them, (2) these measures are frequently justified on the grounds of a connection between drug trafficking and terrorism that is not well founded in fact, (3) they lead to unbalanced policy where all resources go to more aggressive – but still ultimately ineffective – policing while, for example, health and social services that could help people with the most problematic and heaviest drug use (and thus could actually reduce demand for drugs) are inadequately funded or non-existent.”

These concerns are particularly relevant in light of the fact that drug policy in South America is beginning to change, as countries increasingly reject US-led policies which cause more harm than good. Uruguay led the way late last year by officially legalising marijuana, a move that other countries including Argentina, Chile and Mexico are considering.

If West African countries are to avoid repeating the mistakes made in South America, they will have to at least consider these alternatives.

“Until governments take a hard look at policy failures at home and abroad they are doomed to repeat the same mistakes,” commented Dave Bewley-Taylor, director of the Global Drug Policy Observatory. “A predominantly militarised approach to drug policy in Latin America is a tragic and cautionary tale of doubling down on a bad idea. This cannot be allowed to recur anywhere else; least of all Africa. Here, as elsewhere, it’s time to view drug control strategies through the lens of our experiences and the increasing evidence base of what does and doesn’t work in order to consider how we might avoid the pitfalls of the past.” DM

Photo: Togolese soldiers burn marijuana seized from traffickers in the capital Lome, June 28, 2008. West Africa has become a growing trafficking corridor with drugs flown or shipped across the Atlantic and then on to markets in Europe and North America, according to international law enforcement officials. REUTERS/Noel kokou Tadegnon